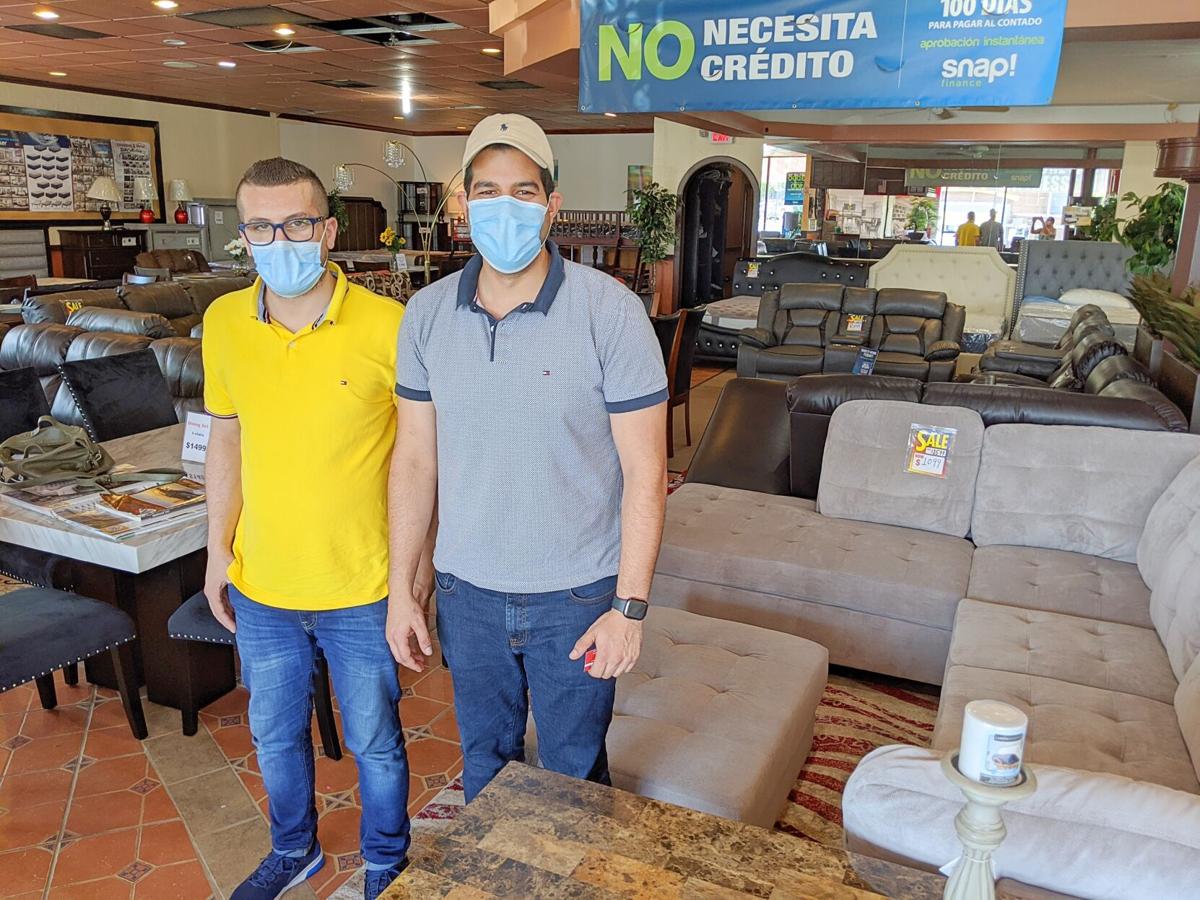 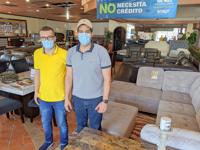 Mamoun Aramin, at left, owner of Furniture & Mattress Outlet, and Angelo Khalil, the store’s manager, aren’t sure how the county’s new plan to widen Va. 28 will impact their store. 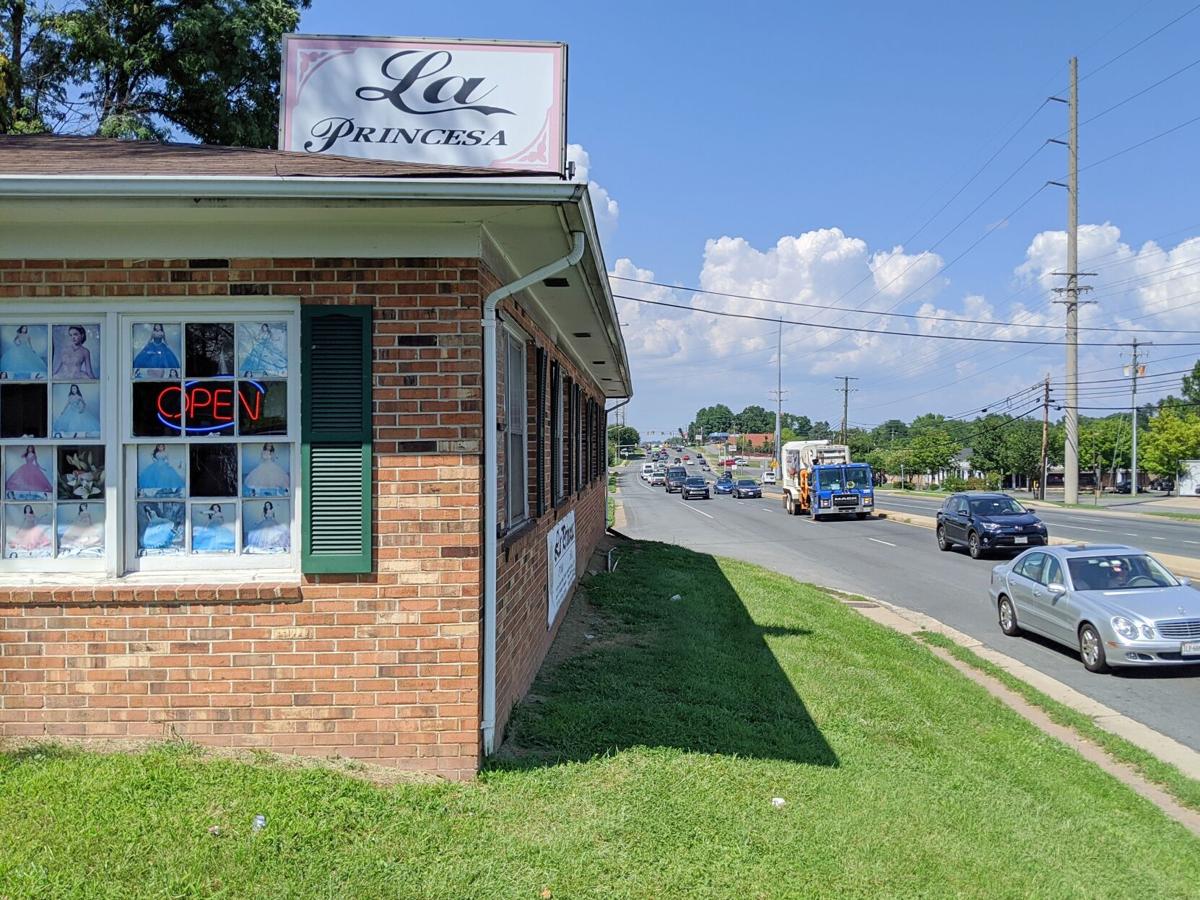 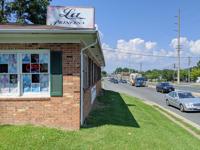 La Princesa Bridal Shop sits a few feet from Va. 28. The county expects dozens of businesses will be impacted by widening plans endorsed by the Board of County Supervisors earlier this month.

Prince William County’s plans to widen Va. 28 from Manassas to Fairfax County — a $400 million project that is expected to force dozens of businesses to relocate. But the owners and operators of storefronts and restaurants on the busy commuter route were still in the dark about the project when reached earlier this week.

Several noted they’re fighting to keep the doors open and spirits up during the pandemic. There aren’t as many commuters through the area, and that means fewer customers. Concerns about road construction, likely years away, will have to wait.

Business owner Gloria M. Velasquez opened La Princesa Bridal Shop in 2004, she said. Before the pandemic, business was good for her along Va. 28, she said. The shop sells dresses and accessories for all occasions, including weddings, baptism or other religious ceremonies and for special birthday celebrations known as quinceañeras.

The business’s location has been a good one. “We haven’t had any problems here,” Velasquez said.

It’s not clear what path the widening would take and how it would impact specific businesses, but the bridal shop sits precariously just a few feet from the existing road.

“I guess we’d go to another location,” Velasquez said.

A timeline for the project and answers about the impacts on businesses will have to wait until funding is identified.

On Aug. 4, the Board of County Supervisors rejected a recommended Va. 28 bypass that would have extended Godwin Drive from Liberia Avenue to a point on Va. 28 near Fairfax County.

Instead of the four-lane bypass estimated to cost $300 million, the board endorsed a $400 million plan to widen Va. 28 to add a single lane in each direction.

County voters have approved $200 million for the project. If the county moves ahead with widening, they’ll have to reapply for $89 million in regional funding that had been secured for the bypass.

When the board approved the widening project Aug. 4, they did not include funding for the project’s design.

Without a design, Transportation Director Rick Canizales said he does not know exactly which properties will be impacted by eminent domain to widen the road. He had previously noted widening Va. 28 was expected to affect 185 parcels and displace 79 businesses. The bypass would have impacted 72 homes and up to 8 mobile homes.

Canizales said in an email he doesn’t know a timeline of next steps for the widening project.

“At this time, we don’t know until we discuss it with our funding and jurisdictional partners,” Canizales said in an email on Aug. 6.

The business at 8279 Shoppers Square, along Va. 28, has been at its current location for two years, he said.

Va. 28 always has traffic, although there’s been less traffic due to the pandemic — meaning fewer sales, Khalil said.

When construction starts, the business may see fewer customers, but he knows it would be temporary, Khalil said.

The end result could help business, with improved sidewalks. “After that, it will be more convenient, more people driving and more people walking,” he said. “People can’t walk right now. I think when it’s done, it will help us.”

The front door to the Manassas Park restaurant, opened in 1999, sits a few feet from the road on Va. 28.

Guapo’s rents the property in Manassas Park, so although they don’t want to move, the decision would be between the landlord and the county, Rodriguez said.

Rodriguez said the pandemic has impacted business at the restaurant.

“We tried to survive,” he said. “We had to let go half of our employees.”

The restaurant along Va. 28 has been closed for about two weeks as they renovate the interior with new seating, walls, paint and more, Rodriguez said, adding the restaurant is scheduled to re-open in a few weeks.

Perzez Humayun, owner of Halal Salt and Pepper, said he’s been at 8535 Centreville Road, along Va. 28, for seven years. He told InsideNoVa on Monday he hadn’t heard about the county’s endorsement of widening the road.

“That will take a couple of years, not today, I’m not worried about years [from now],” he said. “People need jobs and food… People are struggling.”

Humayun has seen a decrease in customers due to the pandemic, he said.

“I try my best,” he said, but some days he’s seen one to five customers, which has meant at times having to pay his business’s rent with money not generated by the restaurant.

Right now, business owners are struggling due to drastic impacts of the pandemic, he said.

The entire PWCBOS should be ousted for this fiscally irresponsible “feel good” decision. After disregarding all recommendations they will waste $100,000,000 of taxpayer funds to build half the road we would have gotten building the by-pass, while also closing 75 taxpaying businesses. This terrible decision will cost the taxpayers of Prince William way more than $100,000,000 in the long run.

Revitalizing the Centreville Rd corridor would be a net long-term positive for the Prince William County tax base, especially if the redevelopment provides effective bus transit service as a sustainable alternative ever-increasing traffic, traffic congestion, and continued rounds of more highway expansions.

north of the Bypass and along Godwin Dr in Manassas, as well as produce four new failing intersections along the Godwin Dr Extension itself.

I wouldn’t want to be one of the 75 business owners who will have their livelihood “revitalized” out of existence. Also I have not seen any mention of expanded bus service along a Rt 28 so that may be wishful thinking.

Most of the business owners rent their stores, so they could locate and continue to operate nearby with assistance from the PWC Dept, of Economic Development, whose mission includes supporting local businesses.

Whenever private property is taken by eminent domain, the law requires that the government fully and fairly compensate the property owners.

For much of Centreville Road through Yorkshire, however, the ideal solution is to NOT widen that road itself and instead build a new four-lane (or wider) road about one block west, where there is currently much less development. Doing so should also significantly lower the cost to add the road capacity (lower costs to acquire right of way, relocate utilities, and maintain traffic during construction).

Creating a new Small Area Plan for this corridor through Yorkshire could promote economic development and revitalization there and increase property values for the current property owners.

By rejecting the Bypass, the Prince William Board of County Supervisors have a new opportunity to revitalize Yorkshire while sustainably improving traffic congestion along Route 28..

Jennifer Garner on relationships: They can be a self-fulfilling prophecy