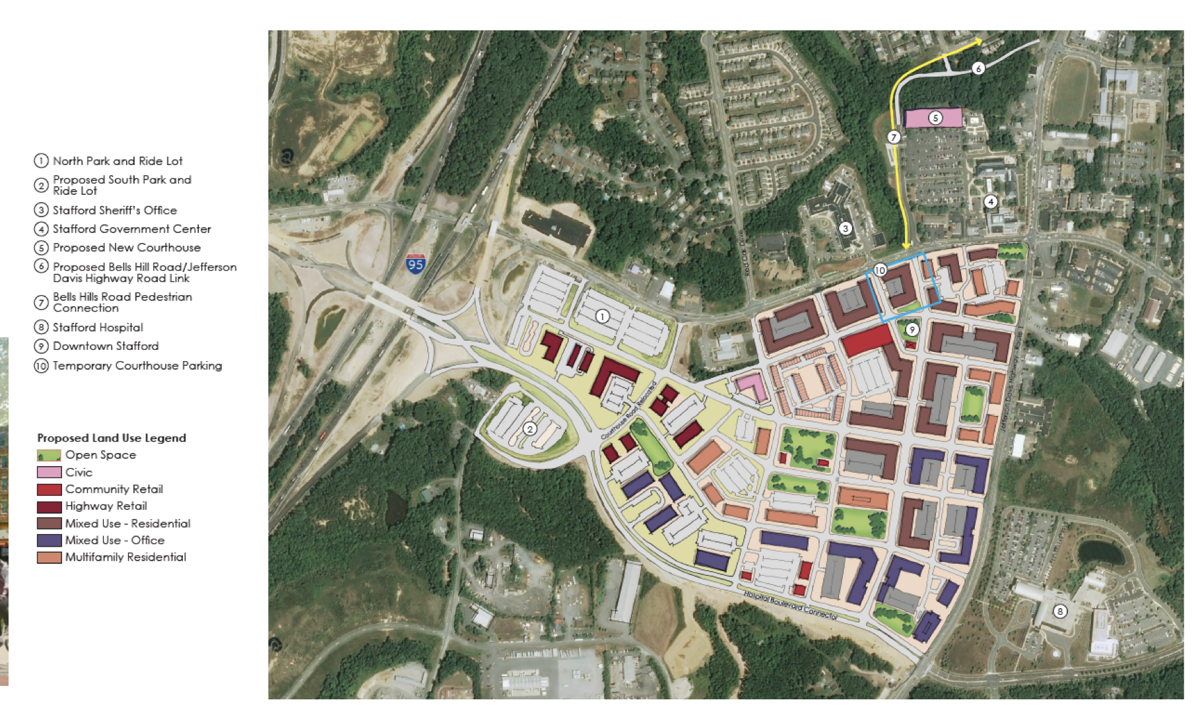 You’d be excused for imagining that you’d never take Courthouse Road again. What was a key route between U.S. 1 and Interstate 95 in North Stafford has been made obsolete by the new Hospital Boulevard Connector that links Stafford Hospital to the interstate.

But the road could soon be home to a new destination: Downtown Stafford.

It’s been a dream of county officials for more than a decade, but there’s new support from the state for Stafford as a Smart Community test site, and a private partner is ready to begin construction on the first phase of the project. The region’s next urban destination might be just right around the corner.

DOWNTOWN IS LOOKING UP

“It’s a generational opportunity,” said John Holden, Stafford County’s director of economic development and tourism.“Not just for this board or the staff here. This comes along once in a generation. This area will develop now — the road is in.”

He’s referring to the Hospital Boulevard Connector, a four-lane road that shifted traffic off the two-lane Courthouse Road route that is home to the county’s government center on one side and the future Downtown Stafford on the other.

“The county and our partner have about 30 acres that could set a new tone of what this could be,” Holden told Stafford Magazine in March, before the COVID-19 crisis. “We could start that with this higher-urban density idea in the next five years.”

A town center has been on the mind of county planners and community members since 2006, as similar urban destinations grew in suburban areas like Reston and Mosaic in Fairfax County and Rockville in Maryland.

In 2011, a Courthouse Area Redevelopment Plan included the concept of a new I-95 interchange and a potential downtown area on county-owned property.

A more detailed plan for an urban style development continued to grow and, in 2017, the county made the key decision to relocate the courthouse to an open area at the government center, instead of plans to put it across the street on the Downtown Stafford footprint.

In February, staff presented the current plans, with a timeline for zoning changes that would help attract private partners key to the project’s development.

Outlined in the Stafford County 2040 plan, the vision for Downtown Stafford is “a vibrant cultural and commercial district with diverse restaurants, retail and a myriad of housing types.” It would have state-of-the-art amenities “with a hometown feel, providing urban life at its best.”

Once completed over several phases, the downtown district would include dozens of mixed-use buildings between U.S. Route 1 and Interstate 95, stretching from the existing Courthouse Road south to the new hospital connector.

The first phase of the development is a six-acre site called Fountain Park, a mixed-use project from a private partner, Jarrell Properties, near the corner of Courthouse Road and U.S. 1. Construction on the $9.6 million project is expected to begin in 2021 and include a mix of commercial buildings, with the county as an anchor tenant, as well as 309 condos.

To find the most notable evolution of the Downtown Stafford pitch, you might have to check the trash cans. One less-glamorous example of the type of technology that could assist the county would be electronic monitors for how much trash is in each public trash can.

A smart community would use this technology, along with smart streetlights, traffic monitoring and public safety drones, to collect and analyze real-time data to improve the experience for residents, businesses and visitors, Holden said.

“This will make the human experience more productive,” he said.

Smart street lights and autonomous buses would be paired with “smart” retail.

A report on market demand saw opportunities for a wide variety of shops, restaurants and businesses — the county analysis found $1.3 billion in lost retail revenue. The study also noted the area should also be able to compete for more attractive businesses, with a higher median household income than Fredericksburg.

But the key to Downtown Stafford’s development won’t be pent up demand for 20th century retail space — it’ll be a new vision for what retail looks like in the 21st century and a host of tech-savvy bells and whistles that urban centers of the future will be looking to emulate, and they’ll look to Stafford as the example.

The area would look less like the brick-and-mortar retail of a traditional city center. Instead, it would offer consumers a more integrated experience, like holographic gaming or clothing stores that use augmented reality and holographic technology to allow customers to try on different looks. Flagship stores would be smaller and integrate more online features.

Because of the large open area of county property ready for development, Downtown Stafford will be a model in smart technology for the state.

Partners at the state’s Center for Innovative Technology (CIT) spent $100,000 last summer to develop the specifications for this smart downtown.

In announcing the deal last spring, David Ihrie, chief technology officer at the CIT, said other communities around the state are excited to learn from Downtown Stafford.

“Stafford County is moving ahead at an exciting time in the development of these ideas, and our collaboration will provide one model for how a community can establish a vision for their future and then take the steps towards making that future a reality,” Ihrie said.

The state has gone beyond that initial investment to help make Downtown Stafford a test lab for new efforts in public safety technology — work has already started at the county government center to test these new technologies.

“This is moving as fast as any project I’ve ever seen,” Holden said. “We’re trying to establish a place where private technology companies can come test their products in regards to public safety.”

Stafford staff and their partners will continue to build out the smart technologies for the Downtown Stafford project, with plans to incorporate these principles into the Fountain Park development as it comes online.

Later this year, the county board is expected to work through the zoning and planning changes necessary for the project, with hopes to identify a private partner for the county’s larger portion of the 30 acres along Courthouse Road in the fall.

Duchess of Sussex 'checks in' on hate crime victim