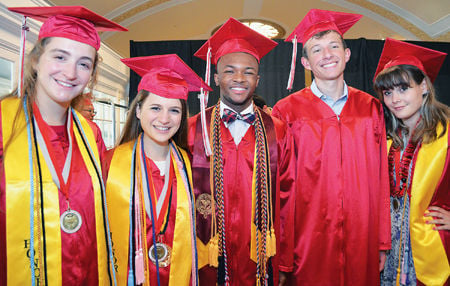 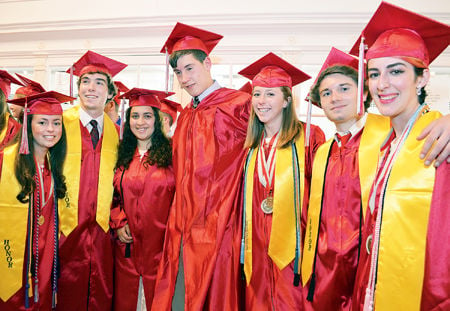 Retired U.S. Under Secretary of Defense for Intelligence Michael Vickers encouraged McLean High School’s Class of 2016 on June 20 to keep their options open, be ready to shift to Plan B and not be afraid to set their goals high.

“Dreaming the impossible dream is very often what it takes to change the world,” Vickers said during commencement ceremonies at D.A.R. Constitution Hall in Washington, D.C.

Preparation also is a key factor in success, he said, quoting from Roman philosopher Seneca the Younger: “Luck is what happens when preparation meets opportunity.”

The 519 seniors, 136 of whom were honor graduates, wore red gowns and mortarboards and some had the privilege of donning colorful stoles and cords signifying their academic achievements.

In between speeches, the McLean Madrigals performed a Scottish tune, “The Bonnie Banks o’ Loch Lomond,” which drew hearty applause from the crowd.

Vickers, a former Special Forces solider and CIA agent who as under secretary for defense under President Obama played a key role in the successful hunt for terrorist mastermind Osama Bin Laden, held the audience’s attention with a combination of brio, humor and modesty.

Vickers joked that he came from the wrong side of the tracks, having had children graduate from McLean’s rival, Langley High School, but had one left who still had time to become a McLean High Highlander.

Vickers noted he had hoped to play quarterback at Pierce College, but was beaten for the role by future television star Mark Harmon. The setback took his life in a new direction.

“America is the land of multiple second chances and new opportunities to seize them,” he said.

A poor student during his formative years, Vickers eventually hoped to join the CIA and “become James Bond.” He spent 10 years as a Green Beret with the U.S. Special Forces, whose motto is “Free the oppressed.” Special Forces troops place a high premium on responsibility and integrity, Vickers noted.

“With responsibility comes accountability,” he said. “Hold yourself to the highest standards.”

Vickers recommended students be scrupulously honest in order to build trust with others and to rely on their gut feelings when making big decisions – after preparing as thoroughly as possible, naturally. They also should draw upon their reserves of humor to keep things in perspective, he said.

“Even when you’re doing the most serious work, there’s always a lighter side to remind you of life’s foibles,” Vickers said.

Vickers recommended the graduates consider careers in public service and quoted Founding Father Thomas Jefferson: “The man who loves his country on its own account, and not merely for its trappings of interest or power, can never be divorced for it, can never refuse to come forward when he finds that she is engaged in dangers which he has the means of warding off.”

Student speaker Addie Wilkerson said the class destroyed the stereotype of selfish Millennials. The graduating seniors learned through their activities what it is like to be driven by a cause, she said.

“Retain some spontaneity,” Wilkerson advised her classmates. “Do not fear having your ideas be known.”

Before presenting the Class of 2016, senior class president Ellie Thomas thanked Superintendent Karen Garza, who attended the ceremony, for her “support of your community and teachers.”

Louis Tomlinson was 'fuming' over One Direction split