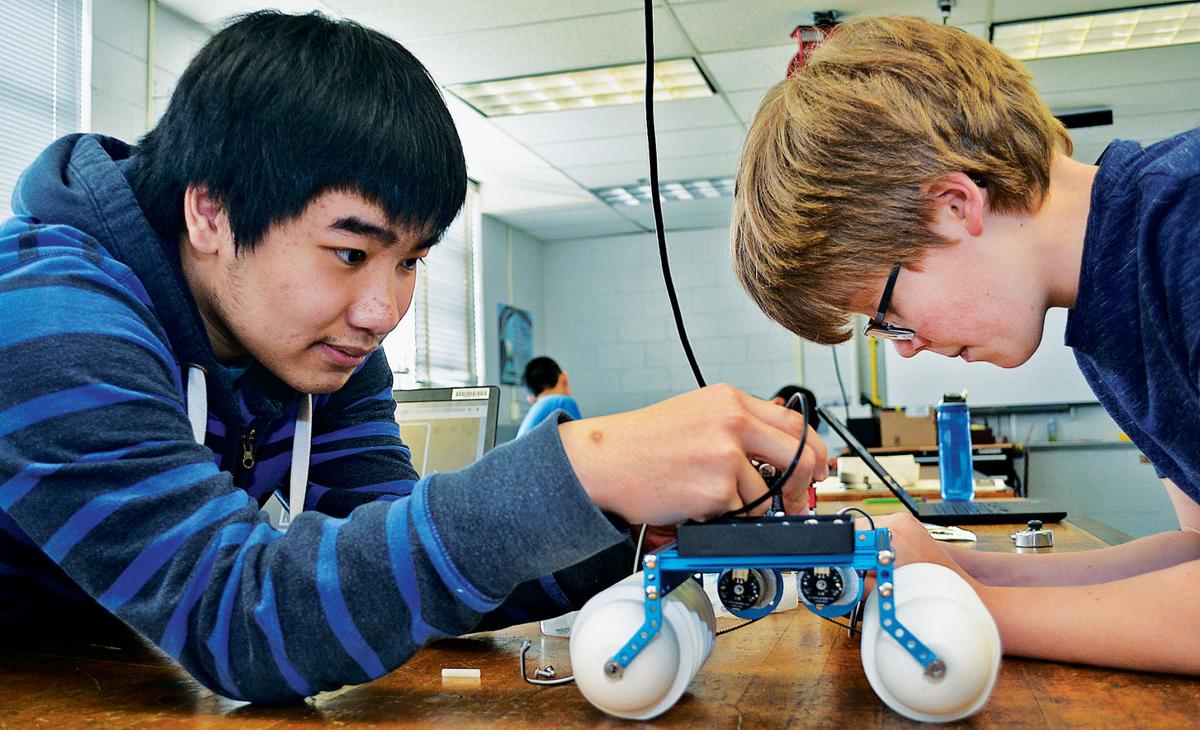 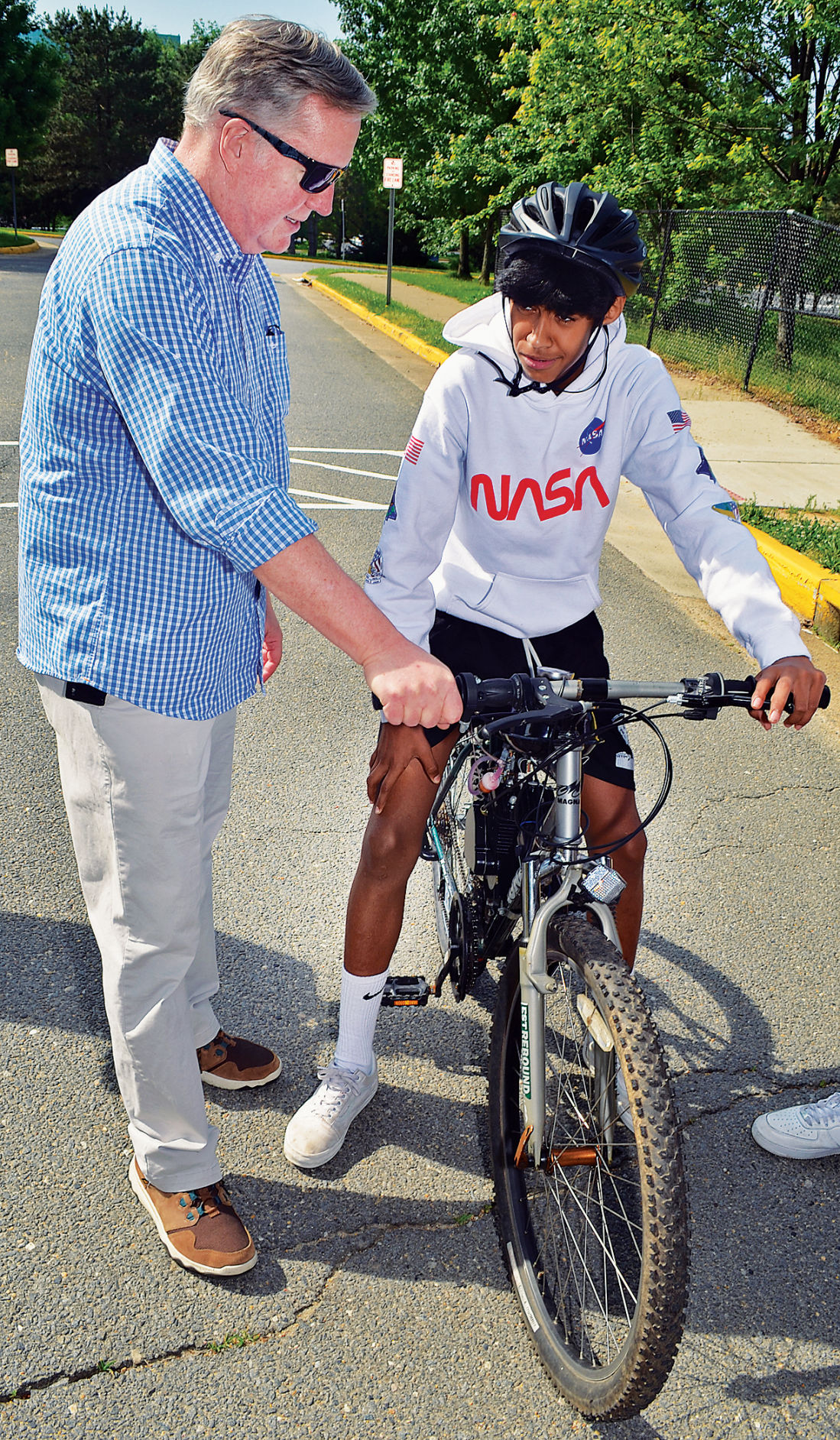 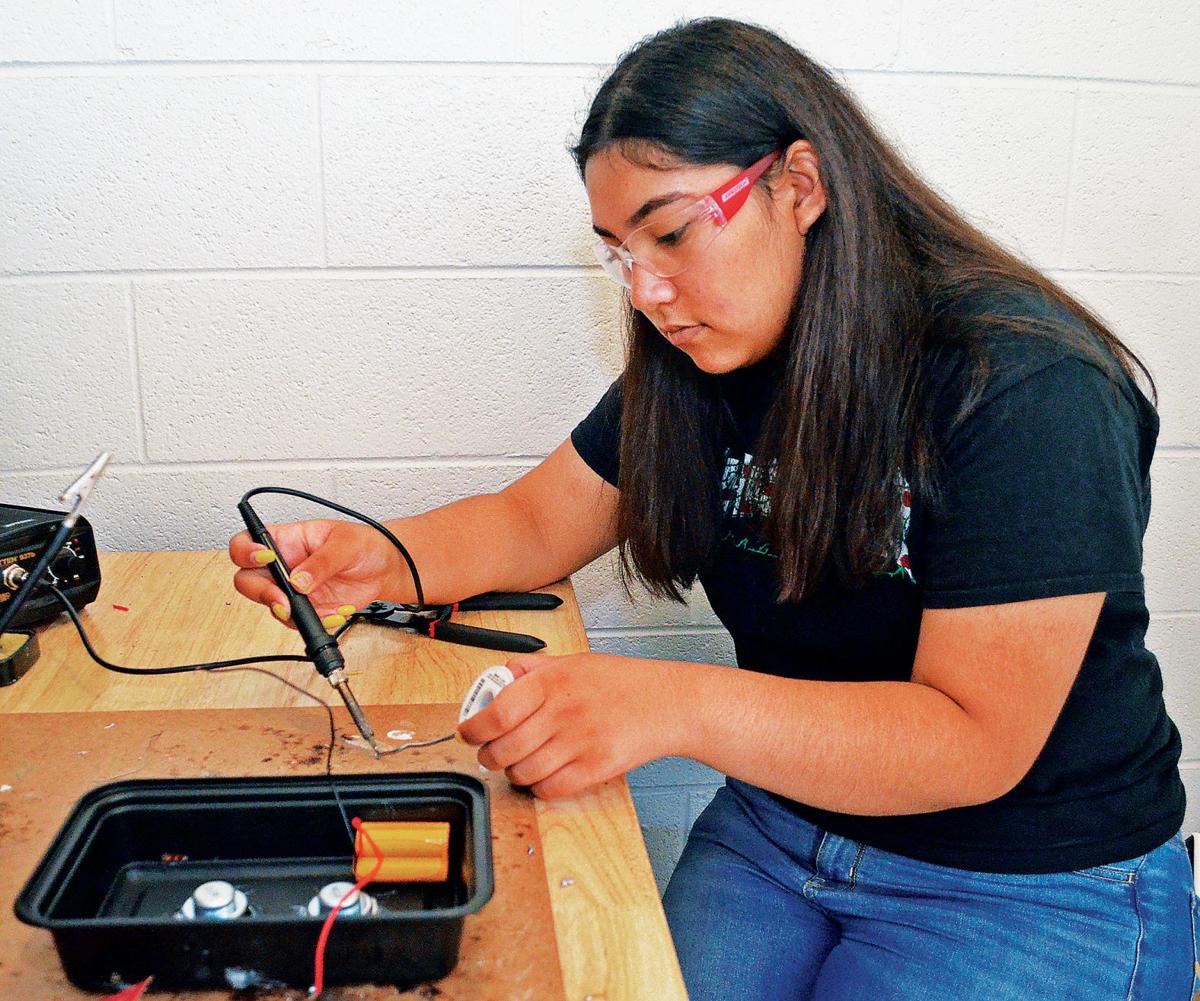 Angie Perez prepares to solder part of a Bluetooth speaker unit May 20, 2019, during an engineering class at Luther Jackson Middle School. (Photo by Brian Trompeter) 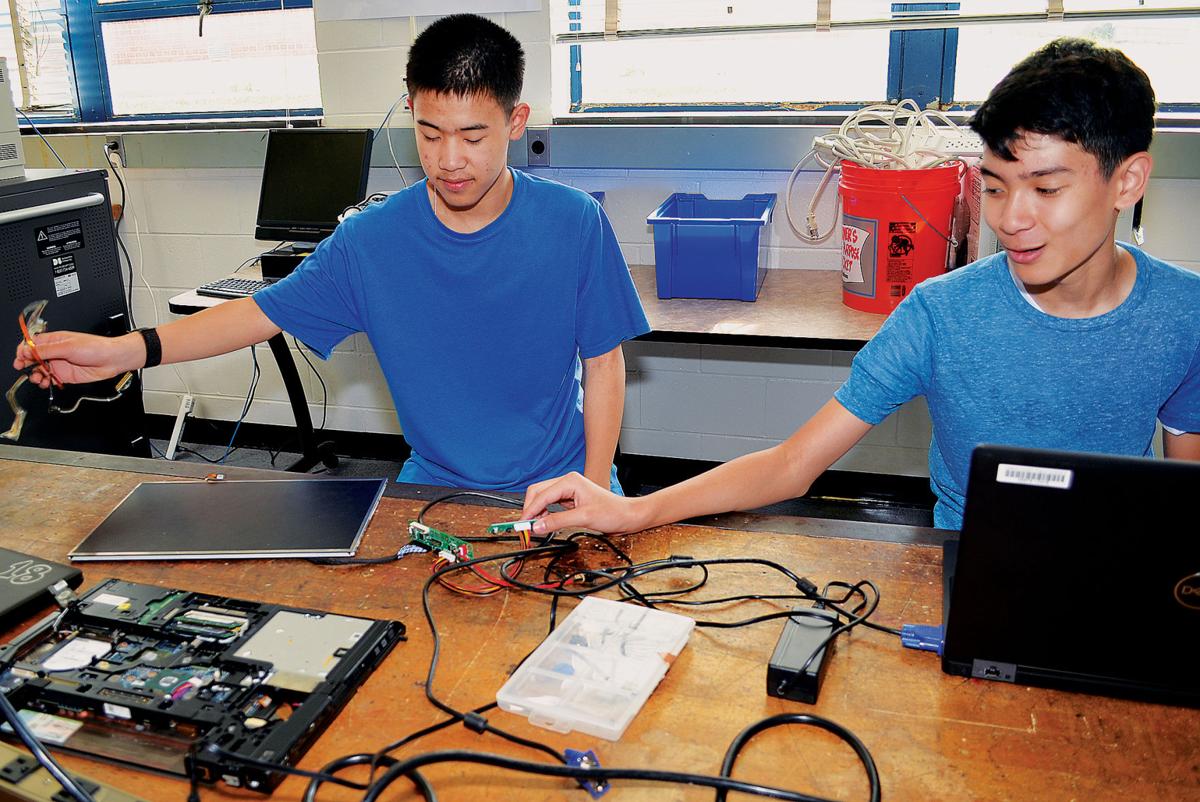 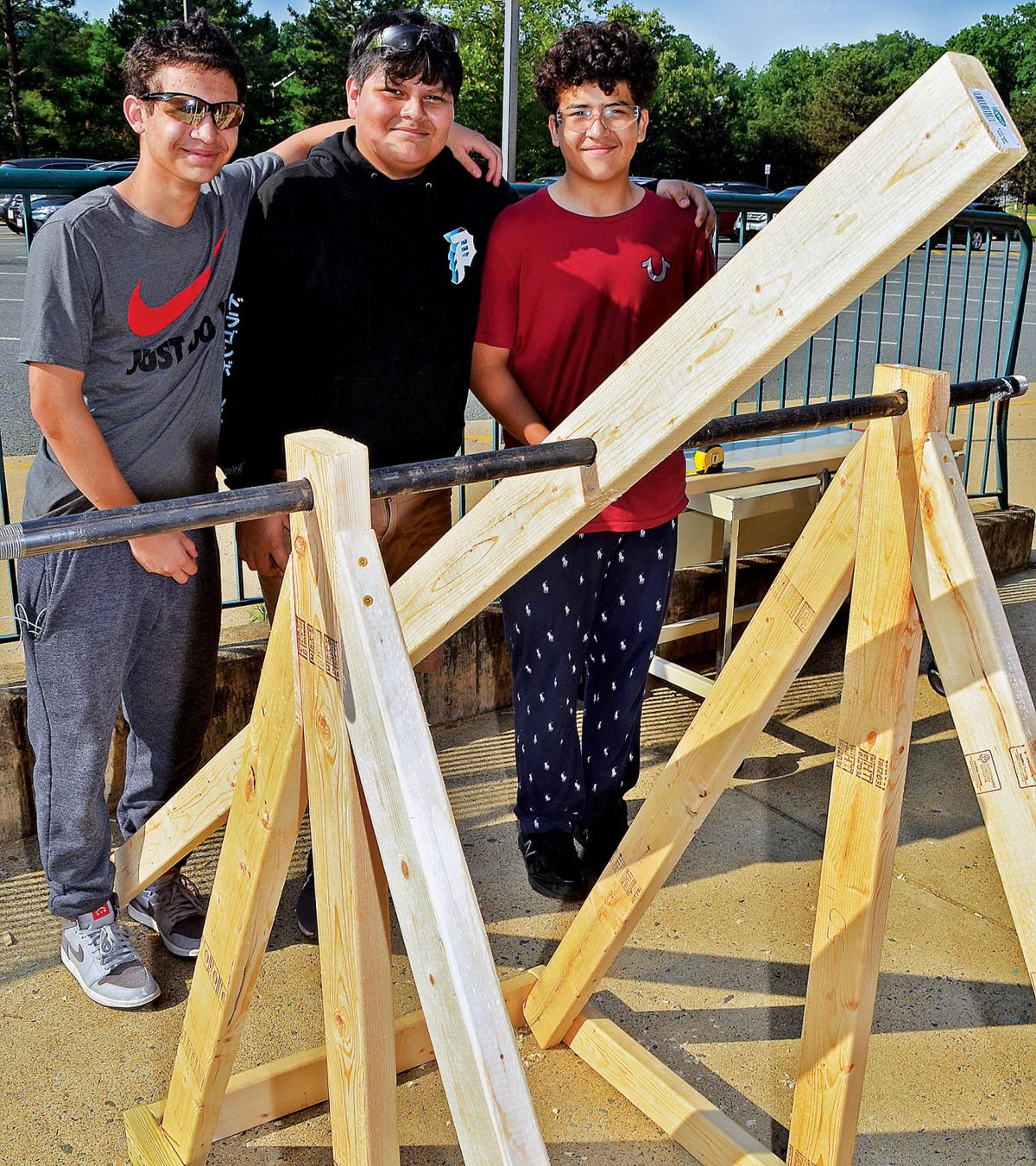 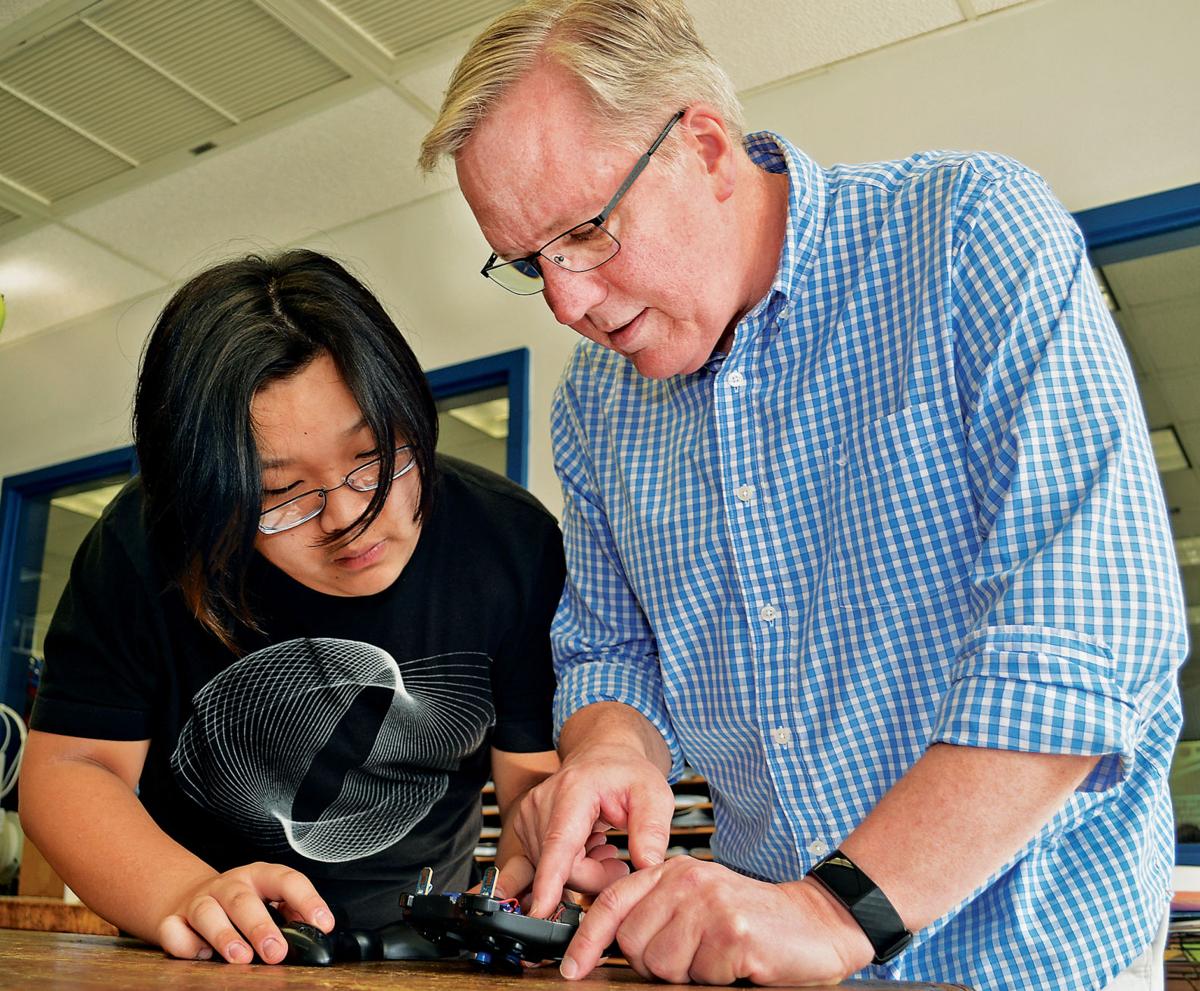 Angie Perez prepares to solder part of a Bluetooth speaker unit May 20, 2019, during an engineering class at Luther Jackson Middle School. (Photo by Brian Trompeter)

At first glance, Luther Jackson Middle School’s shop classrooms look like those of decades ago.

But look a little closer and it’s obvious the pupils are working on highly varied, modern engineering projects. One group is tweaking gasoline-powered engines of motorized bicycles and testing them on the roadway behind the school. Another is taking apart a discarded laptop computer and salvaging its screen for another device.

Smith’s classes revolve around project-based learning, which unlike rote memorization engages students’ minds and forces them to truly master material.

“The biggest thing I hear from high-school teachers is, ‘Give me a kid who can think, not just somebody who’s good at filling out a worksheet,’” he said.

Key traits that Smith teaches: initiative-taking, persistence, adaptability and self-reliance. His grading does not merely reward students who play it safe with simple projects or penalize those who strive for greatness, but fail.

Smith lets students tackle conundrums on their own and experience the frustration inherent in problem-solving. But he intercedes with timely advice if he senses their aggravation is about to become counterproductive.

“Most of my teaching happens just in time, giving groups what they need right when they need it,” he said.

During the first semester of classes, Smith spends the first 15 minutes of each session teaching safety, tool usage and the editorial process for technical writing. Students pen articles for an online publication, but also must complete engineering projects in class.

Smith tries to help students cultivate “executive functions” – skills such as emotional control and time management – that will help them succeed in higher-level jobs.

Smith grew up in Bethesda went to Georgetown University and was a journalist with NBC, CNN and the Associated Press. He later did investment banking and management consulting.

Smith went into teaching because he had a son with autism and could not understand what the boy’s teachers were saying. He obtained a master’s degree in special education and taught that in Fairfax County Public Schools before tiring of having to perform the same role at home as well.

He then helped schools integrate technology and subsequently taught engineering in high school before coming to Luther Jackson Middle School at the start of the 2017-18 school year. His first task there was to clean up and organize the 4,800-square-foot shop area.

“They had just been running a sort of 1970s shop,” said Smith, who teaches five eighth-grade classes with between 18 and 27 students. “Basically, what I wanted to create was a maker space on steroids.”

Smith gets money for his classes through the school system and one of the school’s business partners, Northrop Grumman. Students, who pay $25 materials fees, design projects, sources materials, and assemble and test their devices.

Groups in Smith’s classes recently were building a solar-powered telephone charger, a photo-display box illuminated by light-emitting-diode bulbs and a speaker for a Bluetooth device.

Several groups were working on racing robots. Kai Hartmann piloted one that had wheels with diagonally mounted rollers, which allowed the device to pivot and travel in any direction.

Kevin Nguyen, Jhustin Amaya and Sam Bennion were working on a small all-terrain robot, which traveled on spiral-like white plastic tires the team had made using a 3-D printer. The team also made mounting brackets for some of the machine’s equipment by cutting pieces of thin sheet metal, a process that took several tries.

All projects must include some kind of electronics or  technology, said Smith, noting that even cement trucks these days have sensors to determine their cargo’s viscosity.

“He’s really incorporated innovative techniques to make it not like your traditional shop class,” she said. “What excites me most is I can see students engaged in authentic, meaningful activities and real-life applications. That stands to benefit our students so much more in the long run.”

Tohan is excited to see some students who aren’t typically engaged working together, exploring, testing and building.

“When kids find that hook to connect them to school, it’s like a light bulb has gone off,” she said.

Such courses “bring out an energy level from students that is often nerve-racking for some conventional teachers and administration, but is welcomed and encouraged by engineering teachers,” said Rachael Domer, program manager for Technology and Engineering Education with the school system’s Career and Technical Education division.

“We often refer to it as ‘controlled chaos,’ especially on days where we are racing cars, breaking bridges, launching rockets, or battling our robots,” she said.