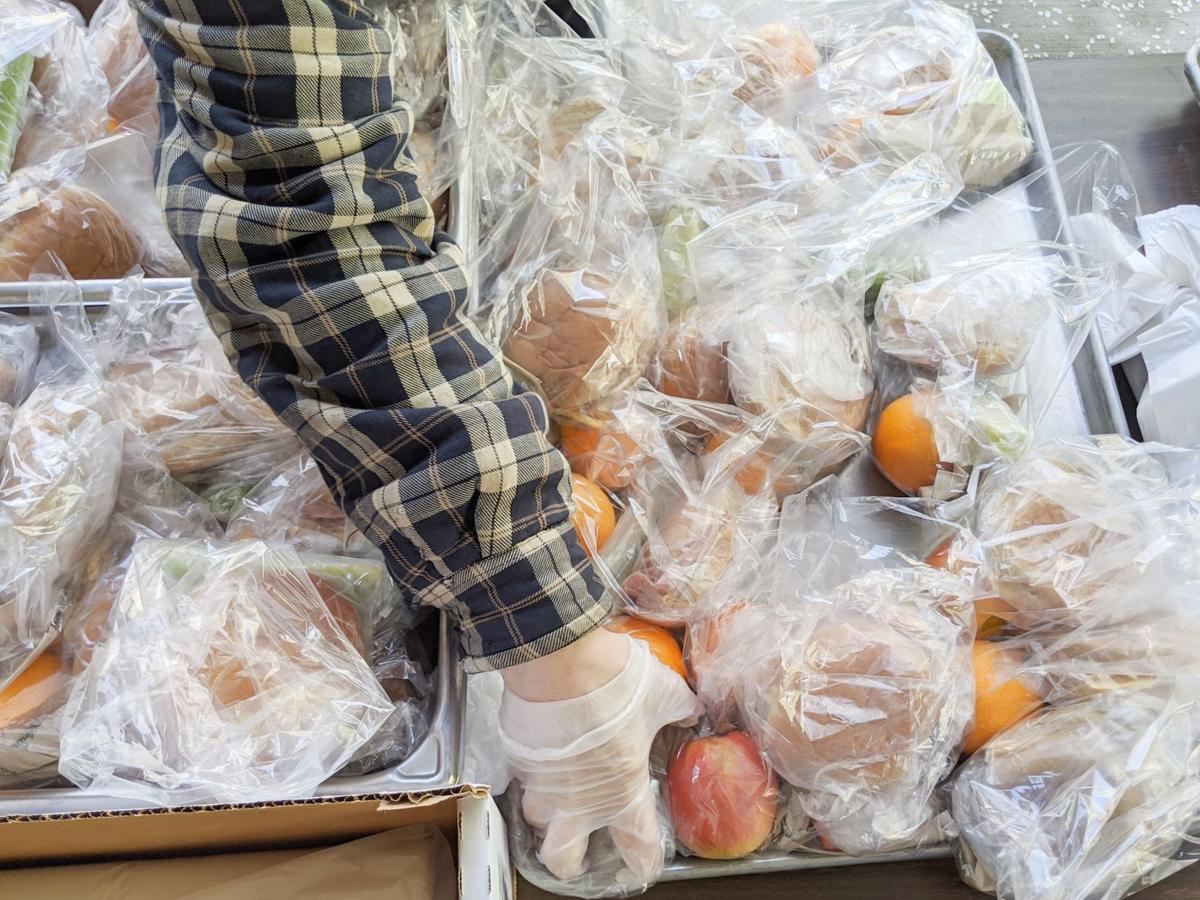 Prince William County Public Schools staff prepared bags of food for children as families stopped by Beville Middle School on March 26. It was one of 19 locations providing meals for students while schools are closed due to the coronavirus outbreak. 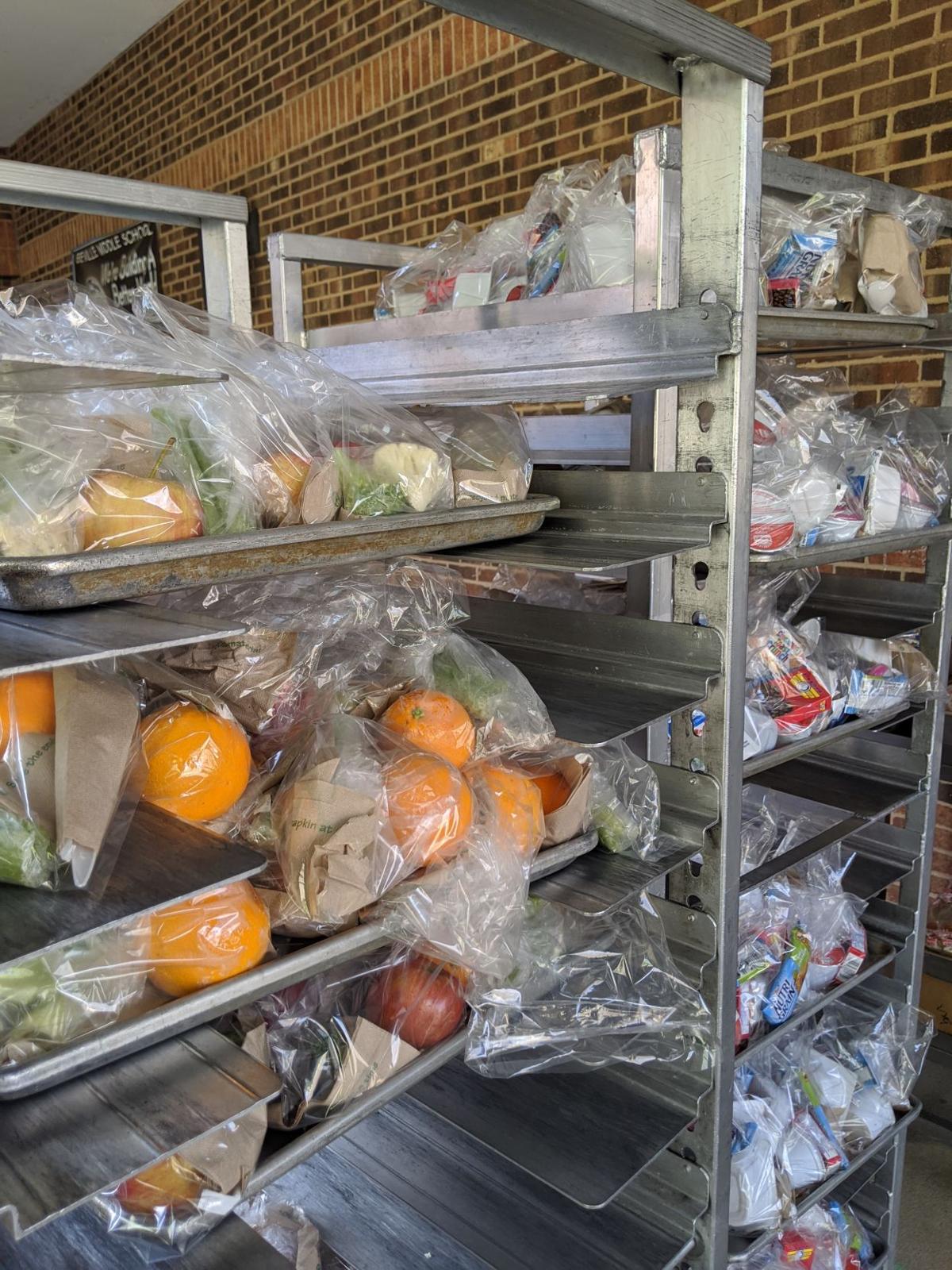 Robert Rother, a grandfather of four students navigating a spring with schools closed due to the coronavirus, ran into a problem while grocery shopping — an issue resolved with support from Prince William County Public Schools.

“The store didn’t have any milk,” Rother said outside Beville Middle School in Woodbridge on Thursday while picking up meals provided by the school division for any student that needs them. "They gave us milk."

Along with milk, each bag at Beville on Thursday had two meals: cereal, raisins, juice and a Nutri-Grain bar for breakfast; and a ham and cheese sandwich, carrots and an apple for lunch.

Rother said the meals help with the expense of feeding his grandchildren. The division has been serving free meals since Monday, March 16, after schools closed due to the COVID-19 outbreak.

Rother said his grandkids are fine — playing video games and trying to figure out learning online, which has been confusing at times.

The school division is handing out meals each weekday from 9-11 a.m. On Thursday, they passed out 10,834 meals at 19 different schools, said Diana Gulotta, the division’s spokeswoman. Gulotta said the division employs less than 60 people who help with food distribution while schools are closed.

Hind Khalilouh stopped by Beville Middle with her three children.

“We try to enjoy our family time,” she told InsideNoVa.

But it’s not an ideal situation. She said she purchased a used computer yesterday so her sixth-grade son can continue learning while schools are closed. Her children are in first, third, and sixth grade, she said.

“We try to make play time, study time, cleaning time and time where we watch a movie,” she said. “We share [with her kids] that we can’t be stressed the whole day.”

She said school closings means one of her daughters who has special needs has lost that support she received at school. “It’s stressful,” she said.

She said she worries that her sixth grade son could fall behind in school.

“We couldn’t help a lot,” she said, because she and her husband are learning English. “Teachers sent a video. He’s just been reading. I’m so worried about him. I want him to learn online, but it’s hard, it’s stressful.”

She and her husband work at a hotel. They’ve both been told not to return to work until further notice.

“They said they’ll call you when they need you, but we don’t know when that is,” she said. “That’s the problem.”

She said she appreciates being able to pick up the food for her children.

“It’s something for kids, it’s good,” she said.

Changes to policies by the U.S. Department of Agriculture and the state will allow parents of public school students to pick up free lunches and breakfasts for their children without the children being present.

Gulotta said on Thursday the waiver was for Virginia Department of Education and division officials are waiting for their direction to update the official policy.

The waiver, issued Wednesday by USDA Policy and Program Development Director Angela Kline, was prompted by reports of some immuno-compromised children and their parents making decisions on whether it was worth venturing to their schools for meals, potentially putting themselves at increased risk of contracting COVID-19.

Del. Danica Roem, D-13th, had called for the change since hearing about family hardships in Prince William County. She said she had been calling USDA officials repeatedly about the policy, and was joined in support of the waiver by Sen. Mark Warner and Reps. Gerry Connolly and Abigail Spanberger. Adam Russo, Prince William County’s director of School Food and Nutrition Services, had also asked for the policy change.

Roem first heard of the policy, and families affected by it, last week. She pitched a story to the Washington Post, and the result featured three families from Prince William County, one with a 7-year-old with cancer, another a family of eight with three immuno-compromised children.

When she called the USDA, Roem said, officials told her the policy was in place to ensure adults without children weren’t taking advantage of the meals.

“Let’s err on the side of feeding kids. You’re talking about an insignificant number of people who would even consider taking advantage of a problem for kids. You’re making it harder to feed children with cancer, like my 7-year-old constituent with cancer. A 7-year-old with cancer or an imaginary case of fraud?”

Faces of a Crisis

Kudos to Del. Roem for advocating effectively for her constituents!