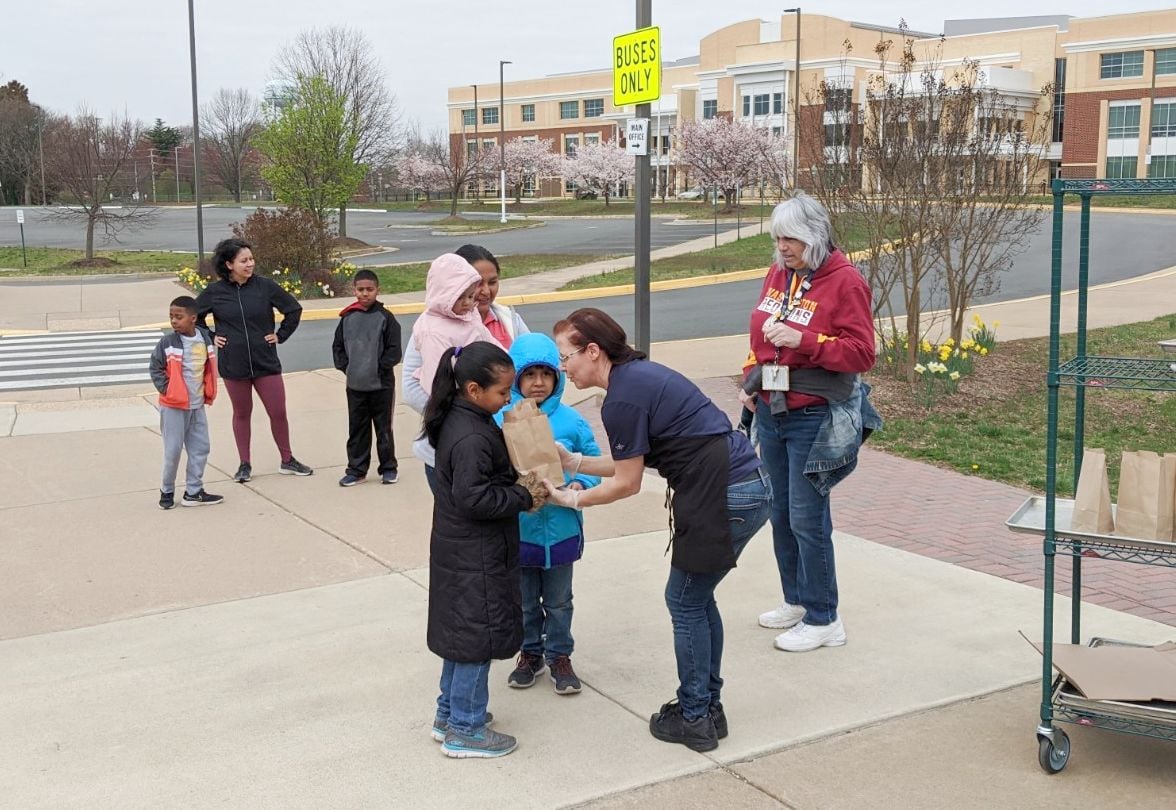 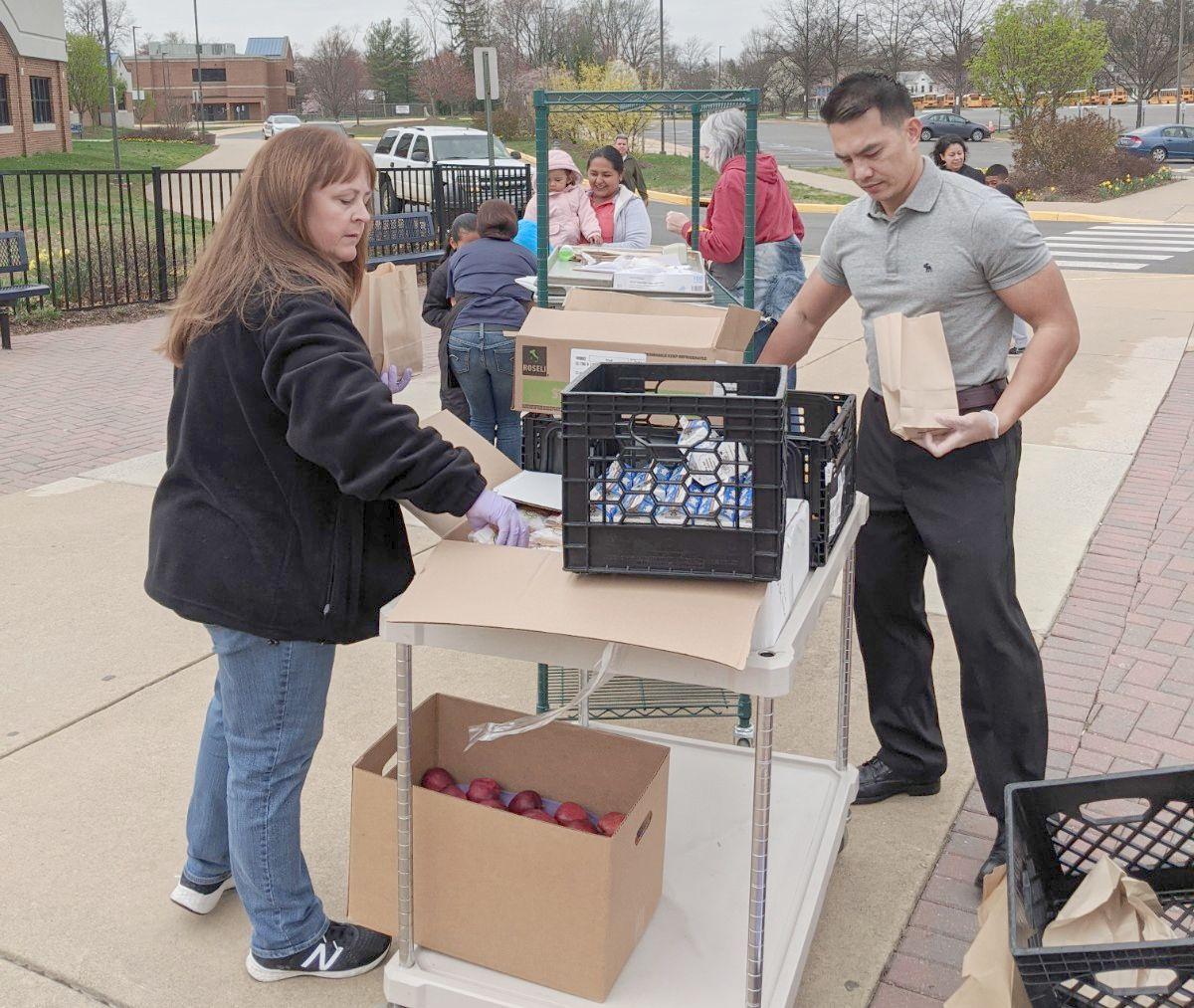 With no element of life in Virginia unchanged by the coronavirus pandemic over the last week, students, parents and teachers across the state are adjusting to the new normal of closed schools, and doing so without any certainty over when they will reopen.

Manassas City Public Schools began meal service Wednesday, handing out breakfast and lunches for anyone under the age of 18 at three schools in different parts of the city. The program, which officials say will last for however long schools are closed, is meant to address one of the many challenges that come with keeping the division’s over 7,700 students at home and out of the classroom.

For years, the portion of “economically disadvantaged” students in Manassas Public Schools has been steadily rising. According to Superintendent Kevin Newman’s budget proposal for the 2021 fiscal year, 65% of MCPS students qualify for free or reduced-cost meals, potentially leaving them without two meals a day in the case of a closure.

On Wednesday, as will be the case going forward, brown bag meals were given to any child under 18, regardless of their economic status, though parents cannot pick up meals for a child who isn’t present. Meal service workers at Osbourn High School said that by noon they’d handed out over 200 meals, and that when distribution started at 11:30 a.m., a line had already formed.

For Crystal Davis, who joined her seventh-grade daughter at Osbourn to pick up her meals, the big challenge so far has been maintaining structure. Wednesday was the third day without classes. Tentatively, officials say they hope to reopen schools by April 14, but everyone acknowledges opening could be delayed even further.

“It’s been an adjustment. I was just talking to her today about having some structure and moving around and still doing stuff,” said Davis, who’s been splitting time between home and the dental office where she works. “I don’t want them to think it’s like a holiday right now, so we’ve got to get into a routine, not knowing until when.”

So far, the district’s classroom instruction hasn’t yet moved online for elementary and middle schoolers, and won’t for at least three weeks (one of which would have served as spring break), according to Student Achievement Executive Director Melissa Saunders.

Students were given packets of material with the hope that their parents will assist in maintaining continued learning, but no mandatory work has been assigned and no grades will be taken. For high schoolers at Osbourn, in which every student receives a laptop, an online coursework platform is available and teachers are accessible for assistance.

After three weeks, the division is working on a plan to move the elementary and middle school curriculum online as well. Earlier this year, officials conducted a survey of MCPS families to determine what percentage of students already have access to the internet and a device to use for classwork, and what percentage does not. In grades one through eight, MCPS has a computer for every student, but they don’t take them home.

“We’re thinking of how we mass distribute those, but there’s no solid plan yet. We’re in the process of matching that so we know exactly how many students need those things.” Saunders said. “Right now, we just want families to be safe and healthy and comfortable and doing what they can at home if they have those opportunities. But we certainly don’t want to burden them.”

With her two sons, one in first grade and the other in eighth, Caden Palmer arrived at Osbourn around 12:15 Wednesday to pick up their meals. Her challenge is two-fold. While her children attend MCPS schools, both she and her husband teach in Prince William County Public Schools.

Keeping her sons active and learning while being available to her students has been no easy feat, she said. At home, her family has started doing yoga in the mornings and maintained some “recess” time outside during the day. “GoNoodle,” an online “movement and mindfulness” platform, has come in handy as well.

“We kind of feel it from both sides, so we kind of understand what parents are having to deal with trying to get schoolwork done,” Palmer said.”Both Manassas City and Prince William, all the support they’ve given as far as having resources sent out, having breakfasts and lunches provided, it’s as positive as it could be.”

Unemployment claims spike as Virginia expands eligibility due to coronavirus

With businesses around the state shutting down and cutting hours to slow the spread of COVID-19, Gov. Ralph Northam’s administration says it’s…

Picking up meals when both parents work in the pwc school system. We really need to pay these teachers more

No we don’t, Manassas schools are unusable.

Caden Palmer is clearly taking advantage of the system, shameful.