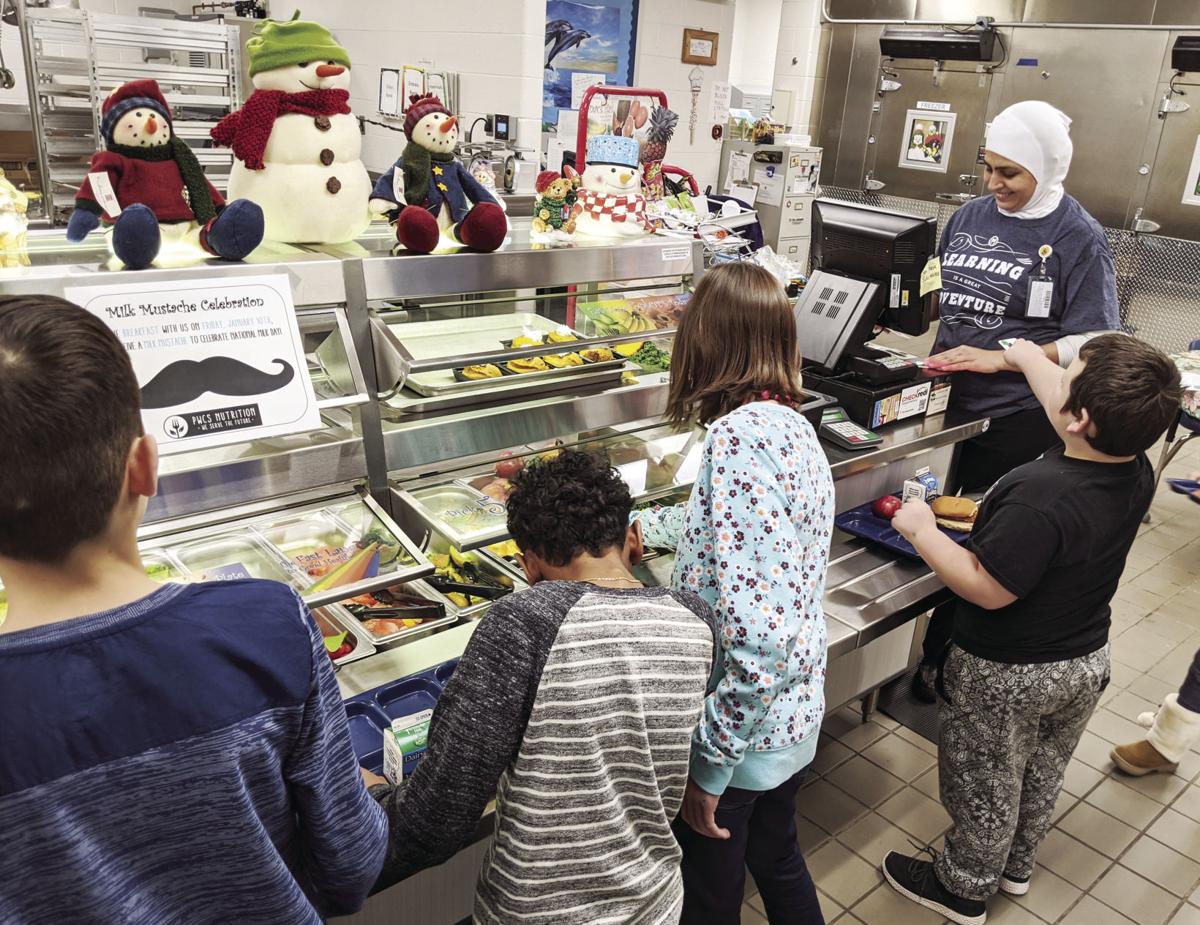 Children at Old Bridge Elementary lineup to pay for their lunch, but not before trying items from the colorful fruit and vegetable bar. Advocacy over lunch debt has changed practices in Prince William County schools. 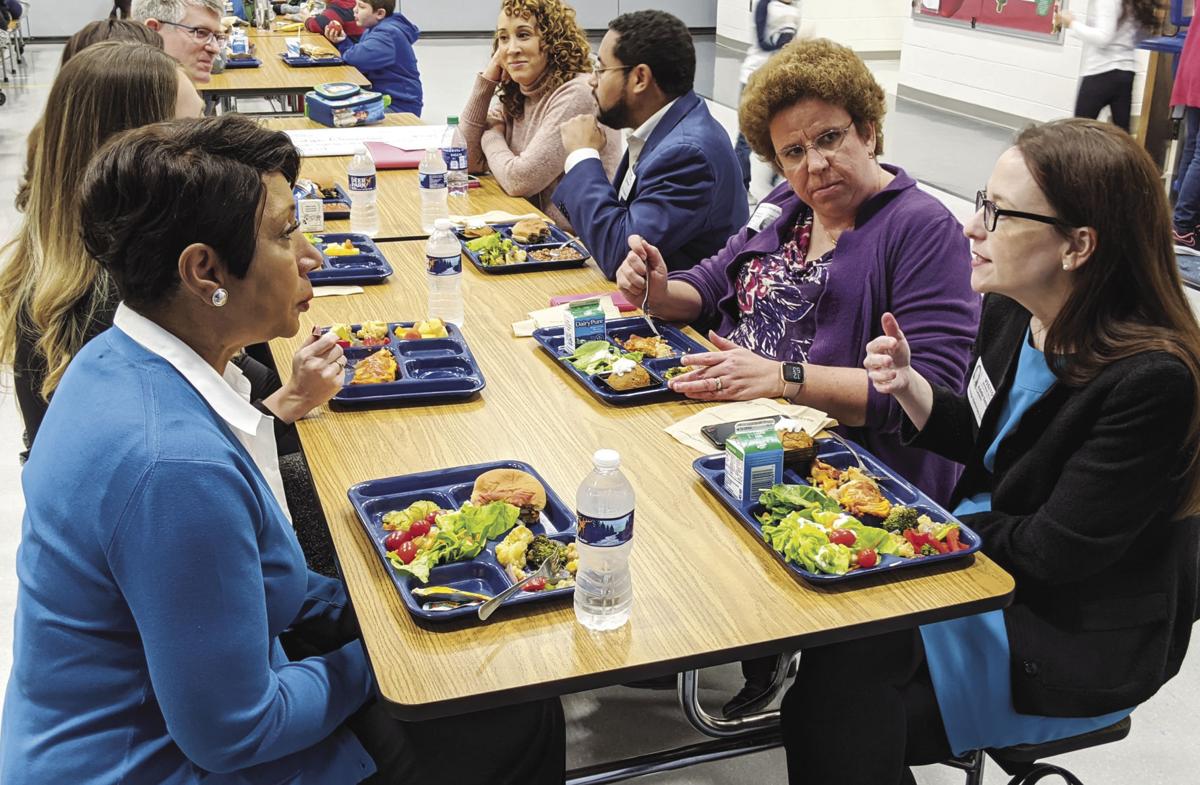 It’s a bill intended for their parents, but a delinquent school lunch bill is felt first and foremost by the child in many schools. Advocacy in recent years, particularly in Prince William County, is changing the culture of lunchroom shaming, but problems with lunch debt persist.

At Old Bridge Elementary School in Lake Ridge, unresolved lunchroom debt has to come out of the school’s budget at the end of the year.

That’s why Principal Anita Flemons was excited to welcome a $589.89 donation from Settle the Debt. The nonprofit’s founder, Adelle Settle, presented the check to Flemons on Jan. 10, and they had some lunch.

“This debt paid off won’t come out of our budget,” Flemons said. “It can be spent on paper, ink and other teacher resources. It’s like Christmas in January.”

The most frequently charged price for lunch in the school division ranges from $2.50 for elementary school students to $2.75 for high school students, according to data from the Virginia Department of Education. For one student that translates to up to $55 a month.

In her experience, Flemons said parents pay off lunch debt if they can. In the 2018-19 school year, 37% of Old Bridge Elementary students qualified for free or reduced lunch. Many parents work multiple jobs and don’t have time to pack a lunch, she said.

“A school lunch ensures students get a balanced, nutritional lunch,” she said.

“I want to make sure no child is going without healthy meals, because a hungry child is not going to learn,” she said.

Settle has her eye on raising enough money to pay off all lunch debt in the division.

Across more than 90 school campuses in the division, 8,678 students owed the division about $264,280 for school lunch as of Jan. 2, according to data from the division.

“That’s jarring, even if we’re such a rich county, we still have so much need,” Settle said.

The region’s high cost of living means there are families who don’t qualify for free or reduced lunch, but still struggle to pay all of their expenses, she said.

“If we can wipe out that lunch debt, that’s one less thing that these families have to deal with,” Settle said.

“All students shall receive the same level of service regardless of meal balance,” according to the division’s policy. “No student shall be singled out, separated from peers, or denied access to meals.”

The division allows students to receive meals even if they can’t pay. The division sends out text messages, calls and emails to families to inform them about lunch money owed. The division can also send letters and send the account to a debt collector.

Almeta Radford, spokeswoman for Manassas City Public Schools, said students owed the division about $41,859 for lunch debt in December. The division has 7,789 students enrolled this school year, according to the Virginia Department of Education.

Lucy Caldwell, spokeswoman for Fairfax County Public Schools, said students across 199 schools owe the division about $216,997 for school lunch. Caldwell said the Fairfax schools’ Education Foundation has a Kids in Need fund, where donations are accepted to help pay down lunch debt.

Del. Danica Roem, D-13th, has introduced several bills in this year’s General Assembly focused on improving policies regarding school lunch since Settle approached her about the issue in 2018.

Among Roem’s legislation, HB 697 would prohibit school officials from throwing a student’s meal away after it’s been served because they owe lunch money.

“We’re making sure that as a parent you know that when your child goes to school, they will be fed and they’ll be adequately fed,” Roem said. “That doesn’t mean that the parent at home is not going to be responsible for debt, but it does mean you’re not taking it out on the kid.”

Roem said she sees this issue as a service to her constituents. While Prince William County has updated its policies in recent years, Roem said she wants to show the county as a model for reducing stigma for other school divisions in Virginia.

“We have to recognize in the greater Manassas area, we have pockets of poverty that are very real; that a lot of us take for granted that when our children come home, they eat,” she said. “That’s not the reality for all families.”

HB 1426 would ensure students are offered a meal despite owing money unless a parent has submitted written notice to withhold a meal from the child. HB 703 would allow school boards to solicit and accept donations to pay off school lunch debt. HB 701 requires divisions to notify parents by the end of the first week of school about policies regarding lunch debt.

“Most families aren’t aware of the policies,” Roem said. “They need to know what could happen as a result of accumulating meal debt.”

“As an Italian stepmom, it’s important to me, I want to feed everybody,” she said.

Leigh-Ann Dieffenderfer, cafeteria manager at Old Bridge Elementary, said the school offers at least one item daily made from scratch, such as lasagna and chili, along with a vegetarian option. Dieffenderfer, who has worked for the division for 18 years, said they also bake their own bread items anywhere from two to four times a week, including garlic bread, dinner rolls and cinnamon rolls.

This is the third year Old Bridge Elementary offers students a fruit and vegetable bar.  She said students can grab as much as they’d like. Students can select sliced tomatoes for their chicken sandwiches or sliced kiwi, among other options.

“We don’t stop them,” she said. “You’ll see some kids getting a lot of something and they’ll say I love pickles or I love tomatoes.”

Well written piece. I'm interested in hearing how this problem starts. It was mentioned that some don't have time to pack lunch and that may be a handful of the cases. Those that receive "free" lunch shouldn't have meal debt if it's free right? So it's not the most income disadvantaged kids. What part is from "reduced price lunch" kids? That could be income related. But kids that don't qualify for either that are right on the bubble (or experiencing a disruption in income) could be impacted. But are there kids with just lazy parents that forget to send the kid with a meal card or something? Do they forget once or twenty times? I'm just curious how this continues to be a problem. Glad to see the non-profits coming in to help but what solves it for the long-term?

I agree, Rob. Since there are free and reduced meals for low income, what is the root cause?

The root cause is negligent parents and are taking advantage of the system. To qualify for free and reduced lunch requires filing paperwork with the school division. There are many parents that do not file because they are illegals and are worried about being reported. The other group is lazy parents that are fine living on the dole. Paying off the debt will allow both situations to continue.

Doesn’t it bother anyone else that the subject matter if this article/discussion is how the schools/government or others can provide for people. What if the article was about how you can provide for your own children at a low cost with planning and effort. Lastly the improvements to school lunches are a farce, the quality and nutritional value is still very low.