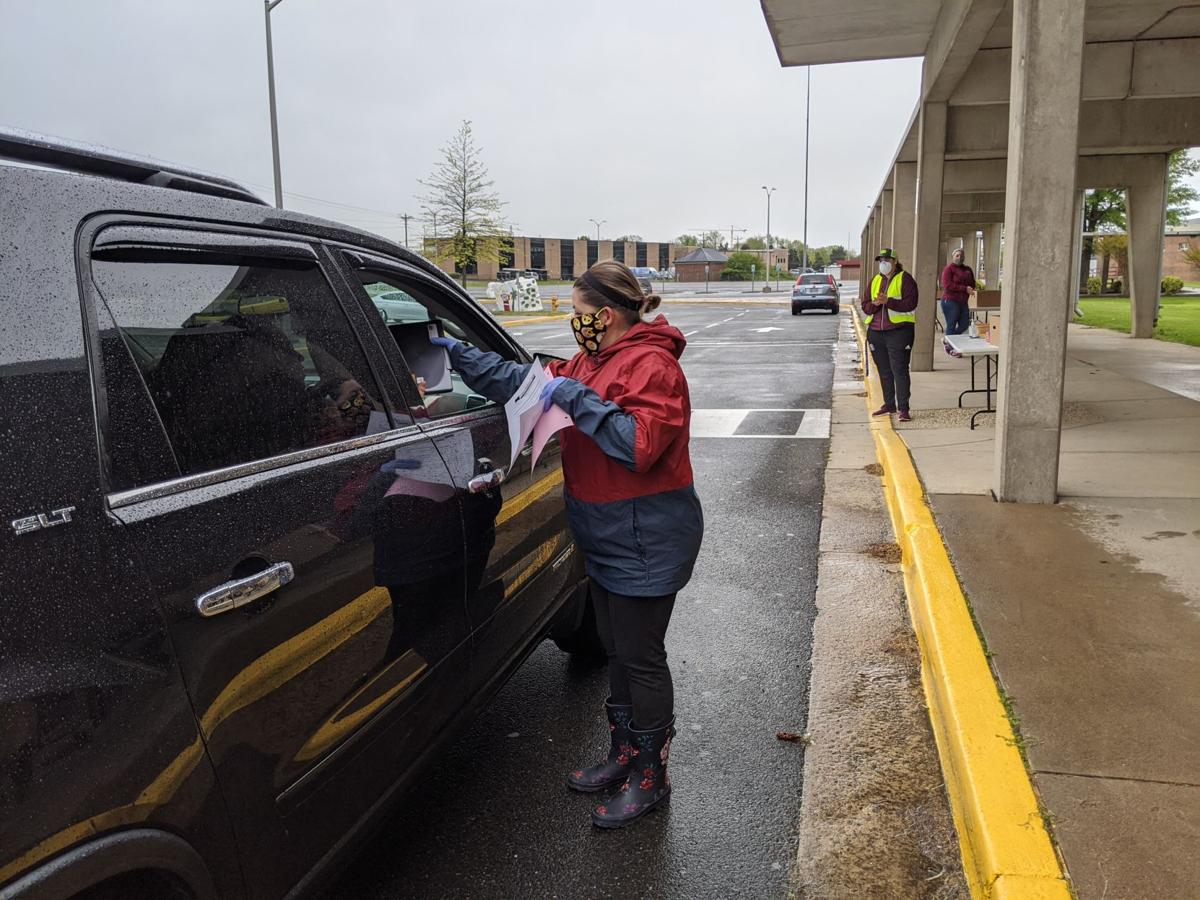 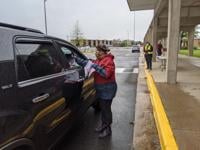 Wearing a face mask covered in different, yellow emojis, Eliana Correa, a Spanish teacher at Stonewall Jackson High, provides tablets for students who need one at home to participate in remote learning opportunities. Correa, other teachers and administrators have distributed hundreds of laptops over the past two weeks for students who indicated they need a device. “Do you have internet at home?” she asked students. Hot spots are available in select school parking lots. 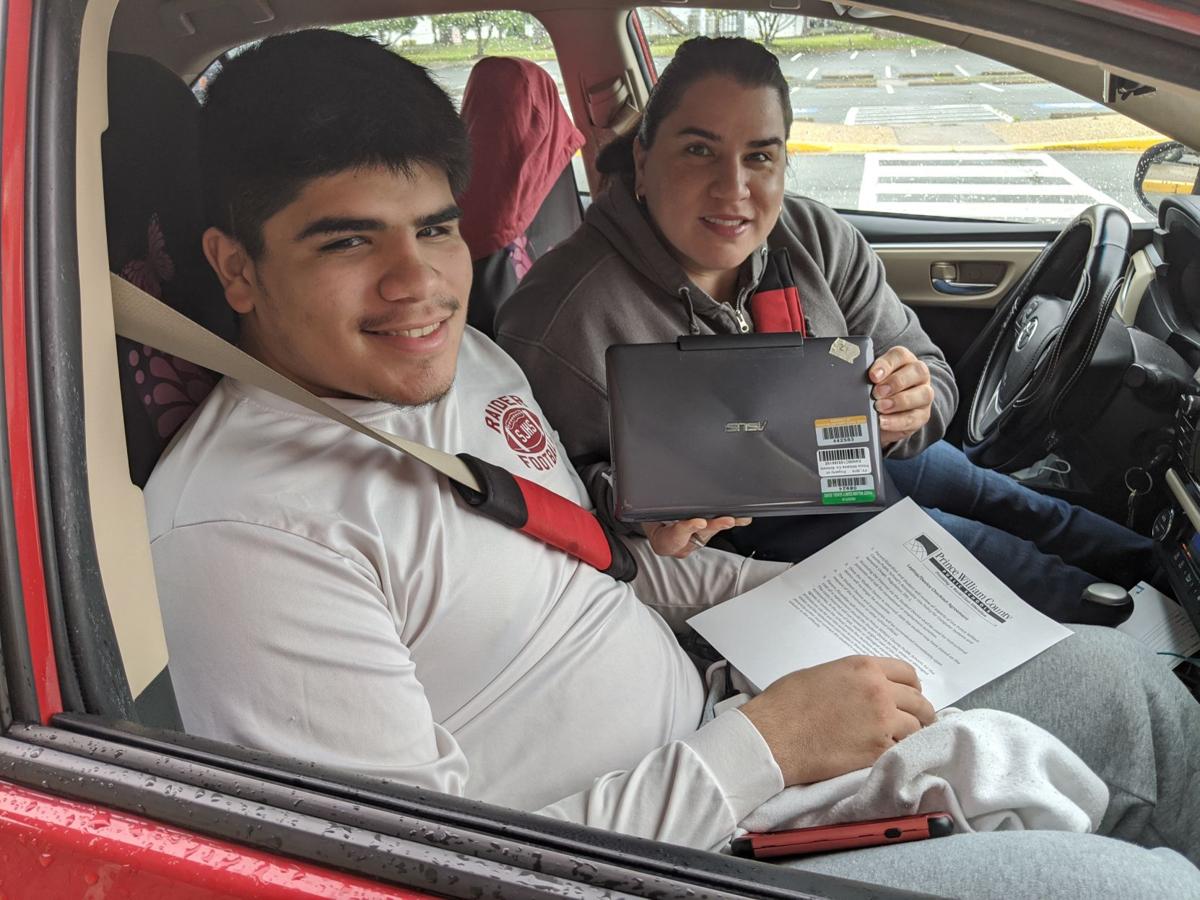 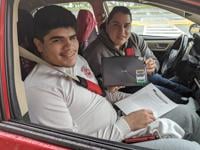 The Vazquez family picked up a device for at-home learning. 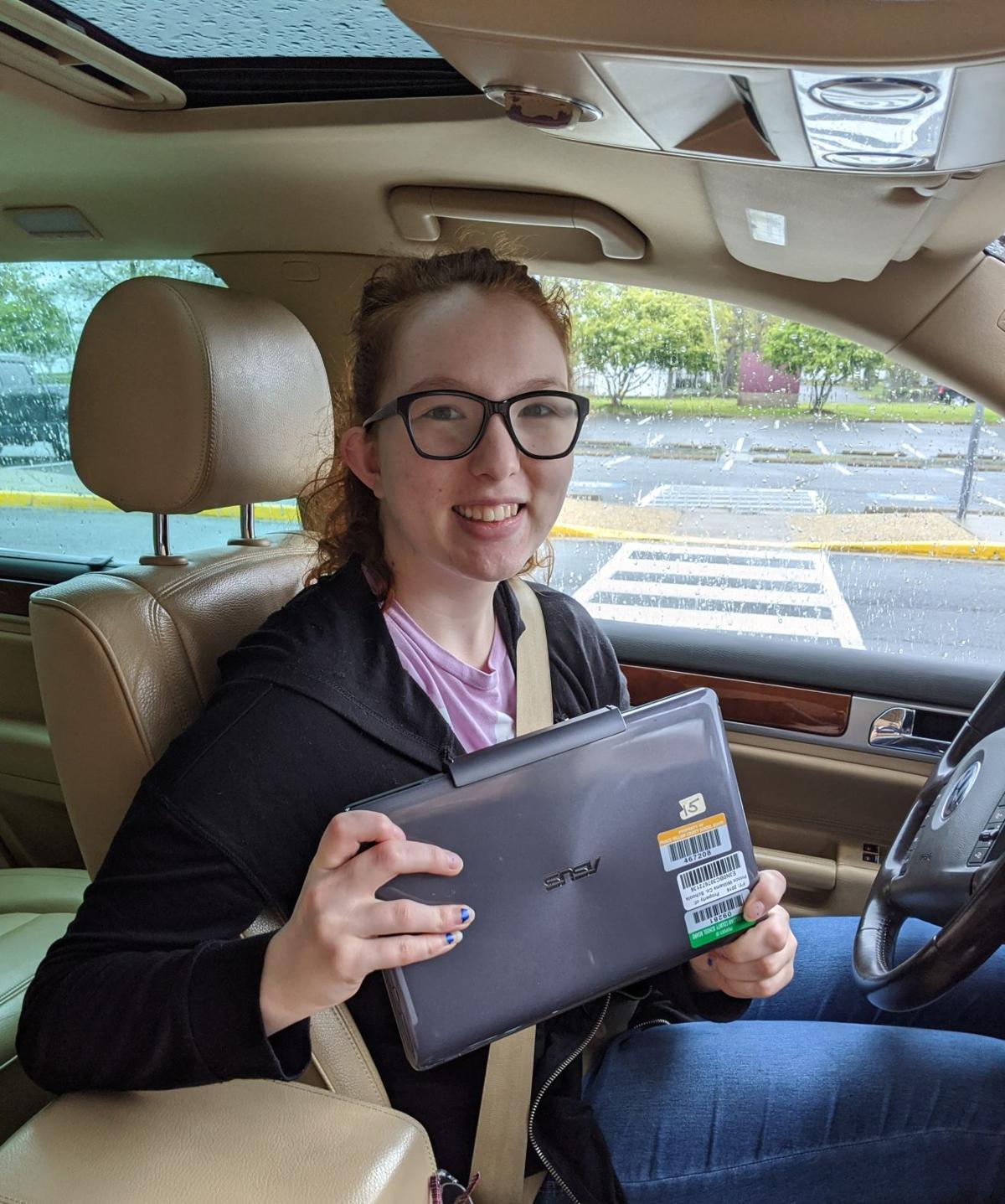 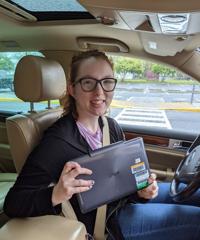 Tenth-grader Sarah Murray poses with a tablet she picked up Tuesday from Stonewall Jackson High. 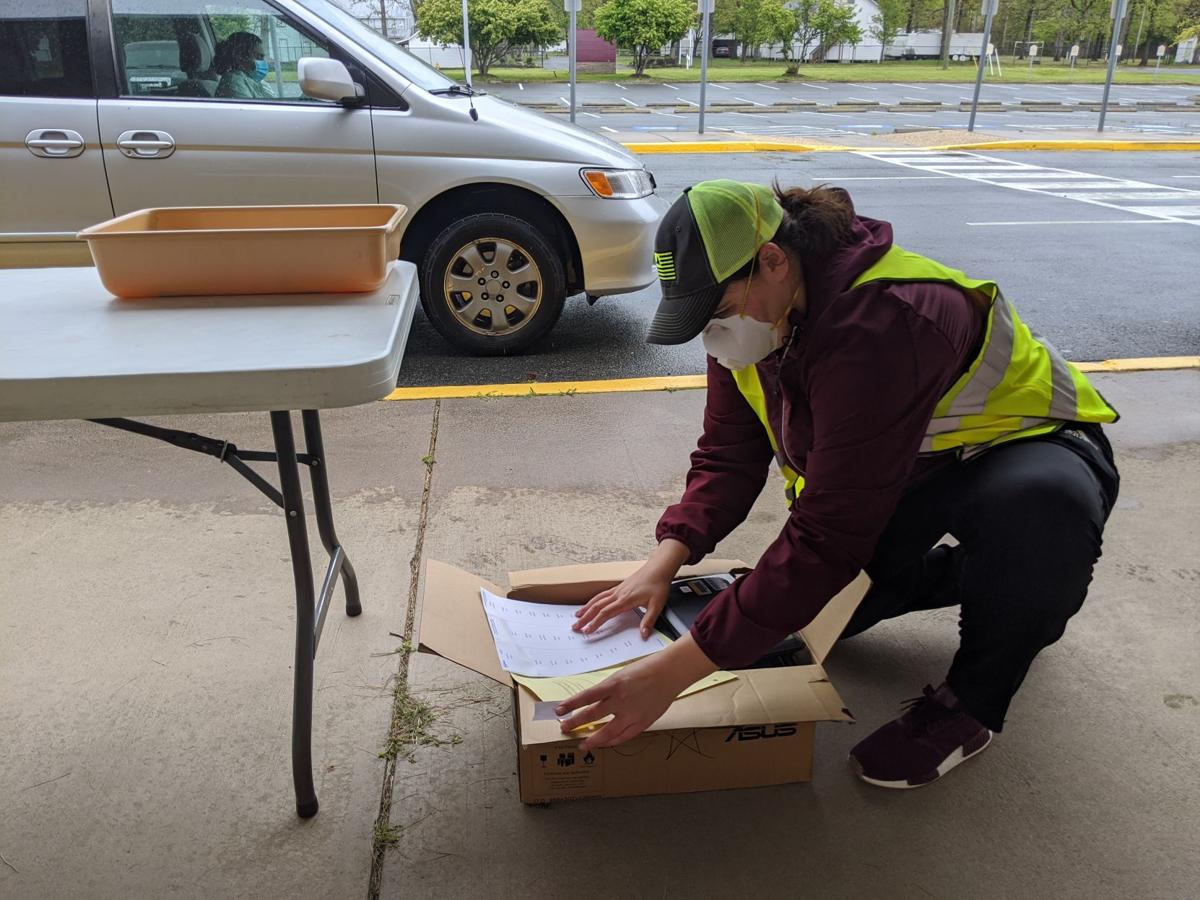 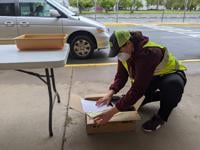 “It’s been kind of hectic,” Lorenzo Nichols said Tuesday in describing life during the COVID-19 pandemic.

His daughter is home from college, but still dealing with final exams. His wife is using their computer at home for work. And his son, a sophomore at Stonewall Jackson High, needs a way to access the remote learning from Prince William County schools.

“He has to try to get in his work,” Nichols said, speaking to InsideNoVa while his son was picking up a new tablet from the school division.

He is one of thousands of students being outfitted with tablets or laptops as the school division transitions to online learning for the remainder of the school year.

High school staff have been gathering devices from classrooms and have begun distributing them to students. Gulotta said the division has provided 2,642 devices as of April 30.

In early April, the division ordered about 15,500 laptops that are expected to arrive in May. The cost is about $6.4 million, which includes software installation, providing student accounts, inventory and delivery, Gulotta said. The school division had already put aside $2.5 million to buy laptops, the rest came from technology funds and other contingency funds to order the laptops.

A four-year $28 million plan to provide “digital equity” to all students was accelerated this spring as the division adapted to the sudden need for remote learning access amid school closings.

Staff’s priority since school closings have become providing as many devices as possible to high school students who need one.

Superintendent Steve Walts has previously said staff will fast-track a virtual instructional plan, although no new work will be graded after March 13. He said assignments are aimed at reinforcing previous lessons and teacher feedback will be helpful for students.

Vanessa Vazquez and her son, a junior at Stonewall Jackson High, also picked up a device Tuesday, because he didn't have a device at home.

“They are helping us to continue to do homeschooling which is excellent,” Vazquez told InsideNoVa. “I think they’re doing a great job getting in touch with parents.”

Vazquez said the device will be better than trying to use his phone, “which is more difficult,” she said.

“The school has been in contact with us to keep kids together even though they’re not here physically,” she said.

Tenth-grader Sarah Murray and her mom drove to the high school. So far, the optional remote learning has been stressful for her, she said. “It’s really hard to understand teachers in email in general."

Amber Murray, Sarah’s mom, said is she working from home. She has four students and one computer. “Five of us on one computer at home is challenging,” she said. “So another computer will help. We are thankful.”

Stonewall Jackson High administrators and teachers stood 6 feet apart and wore masks as they distributed tablets to high school students on Tuesday. After signing a form, students received a device and directions on how to log in to the device.

Andrew Barton, assistant principal at Stonewall Jackson High, said students have previously used these devices in class so they are familiar with them.

Last week, Stonewall Jackson High school staff distributed 200 tablets to juniors and seniors, Barton said, adding they were on track to distribute about 400 to 500 tablets for students in 9th and 10th grades.

Students were also given information about the five schools where they could access wireless internet hotspots if they are in the school’s parking lot. The school division reminded students to observe social distancing, whether by sitting in a car or remaining at least 6 feet apart from others.

The tablets have Microsoft Office apps such as Teams, Word, PowerPoint, Excel and OneNote, as well as learning resources from Clever and Discovery Education.

With more than 91,500 students, the division has prioritized high school students first with a plan to then focus on providing devices to subsequent grades starting with middle school and then elementary school, depending on funding, Gulotta said.

The school division now is completing a survey of students across all grade levels and individual schools are following up with parents to determine needs.

The division is asking students to access the internet in these school’s parking lots, either by staying in the car or observing physical distancing.

COVID-19 hospitalizations declined for the third straight day Saturday and daily reported test results for the virus soared to over 6,700, bot…

what a total waste of taxpayer funds. case in point: 10th grader driving a late model vehicle to pick up a junky acer tablet. If she can afford to drive a late model vehicle, i'm sure she doesnt need a tablet. These should be needs driven, not just handed out like freebies. there is no school the rest of the year, these kids will either chuck them to the side for the summer or sell them..'

would have been much better to use the money to pay teachers more..such a waste.

This is stereotypical drivel. The reality is a lot of working class people of color live in multigenerational households with aunts, uncles, grandparent. This is in order to save money but access to certain items can be restricted. Because of this access is uneven.

Instead of judging people based off their car, when they are just trying to help their child's education, we should be more inclusive. In addition I don't see the usual troll group on here judging the ultra wealthy 1% in our area, who pay NEXT TO NOTHING in taxes, and leach off government corporate bailouts to never lose anything. Instead we attack working folks, sad!

it's a waste of taxpayer funds, period. if they were going to have the devices, they already should have them. there was no need for this. so go throw your political tantrum elsewhere. we are overly inclusive, to the detriment of the student.

everything is racist with you progressives...people pay enough taxes. taxation is theft anyway. how about you get a job and pay for your own stuff?

Great plan, poor execution and leadership. Four years to ensure each student has the necessary tools for learning? This plan makes absolutely no sense. I guess Kindergarten - Second Grade students can share the devices when they’re at home, since there is no plan for equality in learning for these grade levels.

I went to PWCS, and now my child is in 5th grade in PWCS. I am absolutely disgusted with the direction the schools have gone in. Every other surrounding county has had access to online learning. My child has not had any access to continued learning at all because of this stupid laptop project. It is aimed at Dale City and rte 1 populations "to make everything fair" because the parents are mainly undocumented non English speakers who don't follow up with school related issues or their children's education. This county is doing a great disservice to all other families who are involved, and just want our children to get a proper education. The county has always had programs for devices and internet access, and teachers in the schools have said the families won't answer any correspondence from teachers, let alone go through the process of getting the devices for their children. Now every child is left behind...

This is completely false. PWCS has been providing distance learning since the week after lockdown started. Initially once each week, they moved to daily 1hr sessions 2 weeks ago.

I'm not pleased with the quality of this remote learning, at the elementary level. Friends with middle and HS students are frustrated as the quality varies significantly by teacher.

We live in one of the richest counties in the country, and I would hazard a guess that 99% of families have access to a tablet or computer already.

Students were not allowed to do any work at all until April 14th, over a month after closing. Now it is "suggested" they study 1 subject a day for an hour. Nothing is turned in or graded, and there are a few extremely vague completely non helpful uploaded worksheets a week. For example have a child read a book and ask the same few questions every week. Fairfax and Loudoun have structured learning with lesson plans, participation, and SOL objectives to stay on track. You have to do your own research on the Virginia SOL website to have any idea as to what objectives your child should be learning to stay on track, then you have to teach them and develop activities for them to learn the material. There is no help at all.

That's not true my younger sister who is a Senior in PWCS has attended classes for a longer while than my brother who goes to TJHSST in Fairfax that just started TWO WEEKS ago, because of the counties failed roll out of online learning. Instead of saying racist things that are factually incorrect, use constructive criticism.

regardless of what mr/ms inside commenter said..there is no mandatory online schooling in PWC. no new work is being done, so whatever sessions teachers have are not mandatory. you are completely correct, nothing is being graded and at this point relatively worthless to roll anything out.

they do provide some zoom meetings here and there, but they are not mandatory. my spouse is a teacher, about 1/3 of the students actually show up..the rest you cannot make them.

Prince Harry: 'It will take every single person on the planet to defeat racism'