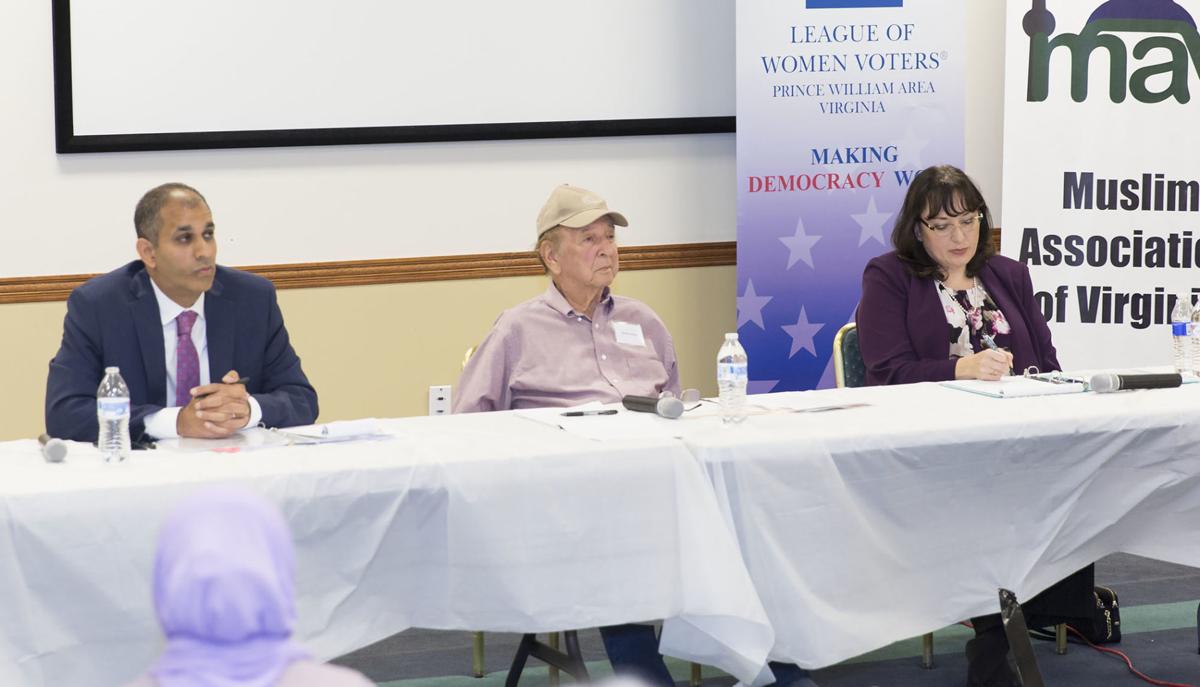 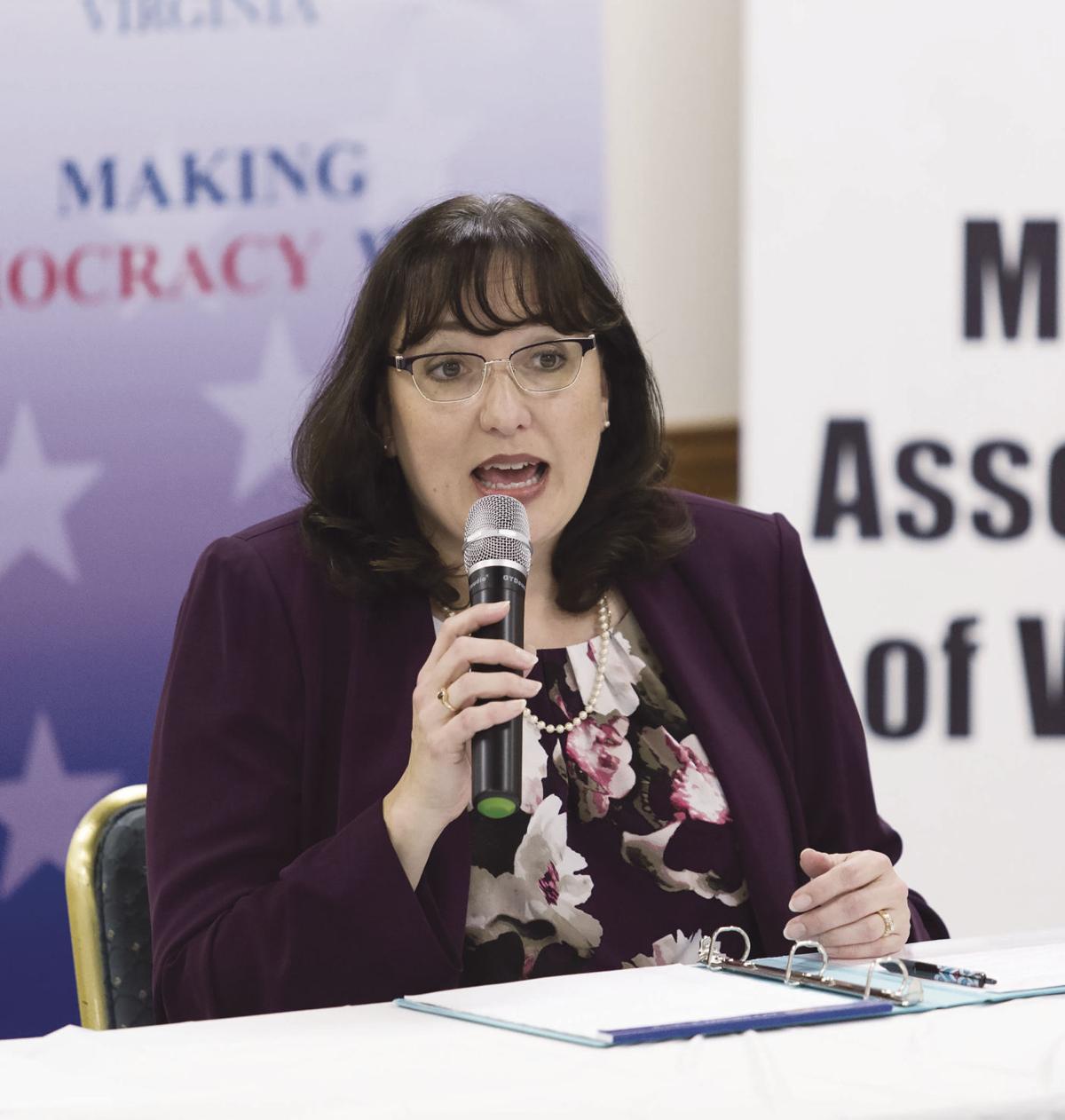 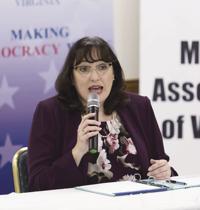 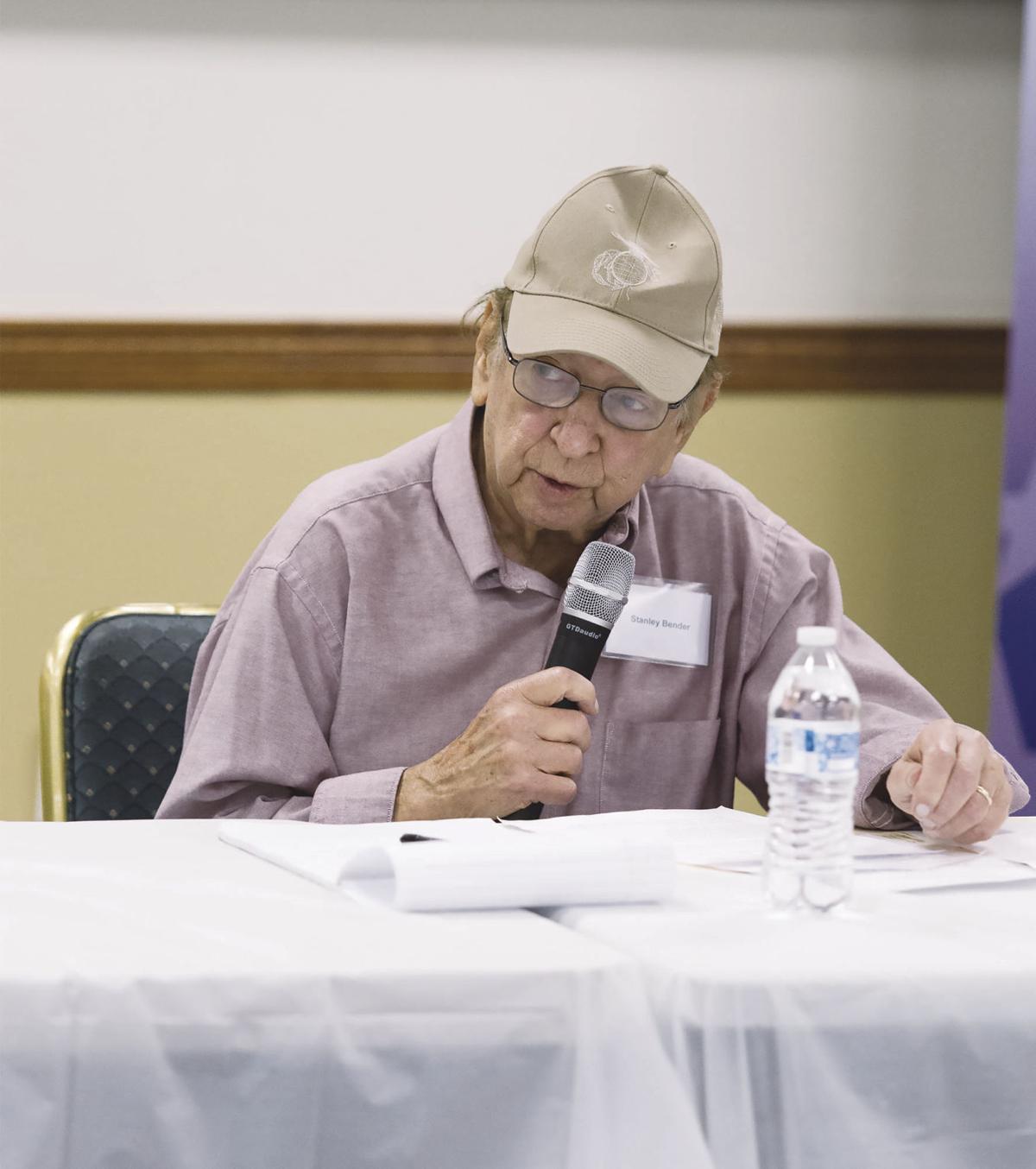 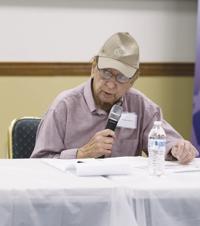 Stanley Bender, running in a Nov. 6 special election for Prince William County School Board chair, debates the issues with his two opponents at the Dar Al-Noor Islamic Community Center on Nov. 9. Also on the ballot are Babur Lateef and Alyson Satterwhite. 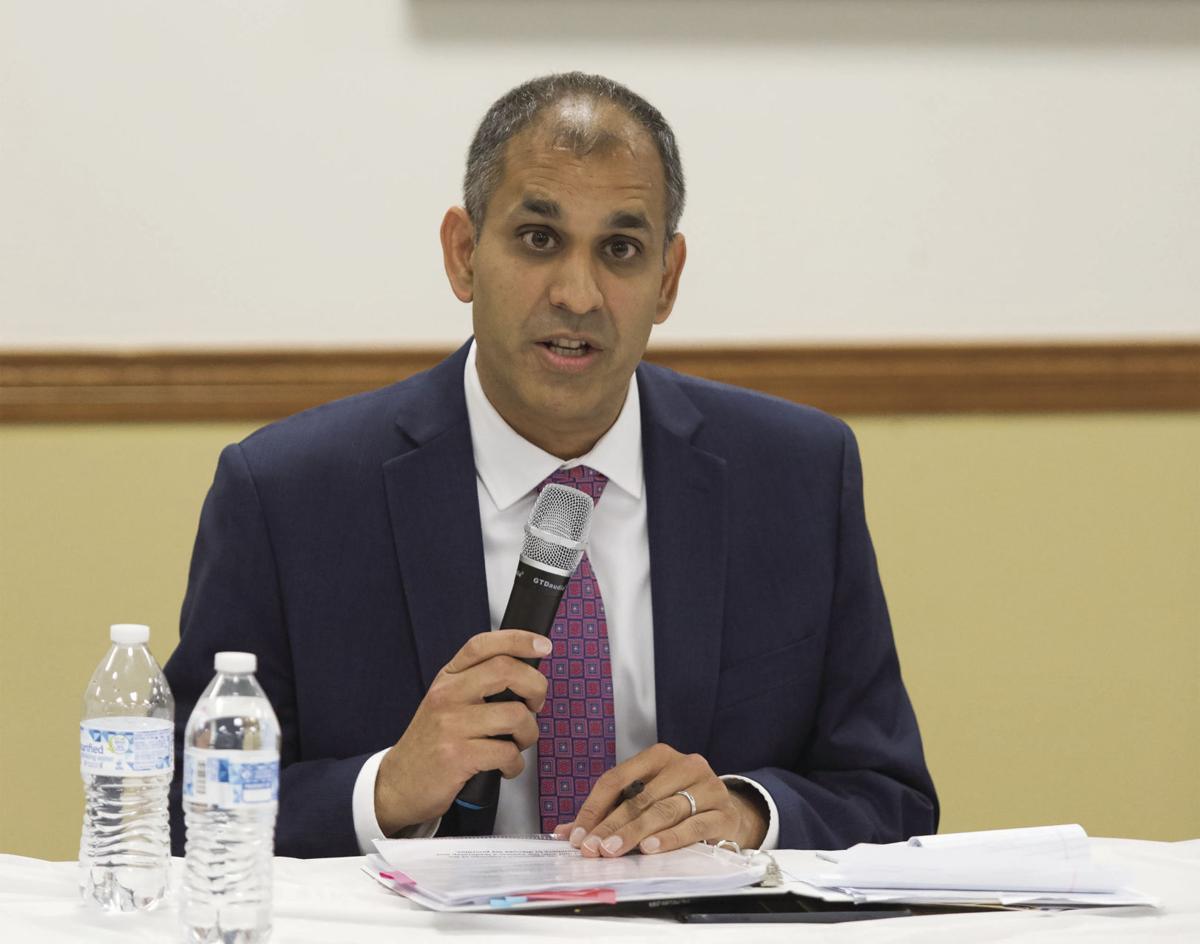 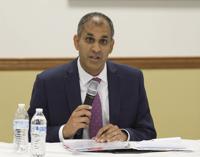 Babur Lateef, interim chairman for the Prince William County School Board,  at an October debate. Lateef won the special election to fill the remaining year in the current term for board chair.

Stanley Bender, running in a Nov. 6 special election for Prince William County School Board chair, debates the issues with his two opponents at the Dar Al-Noor Islamic Community Center on Nov. 9. Also on the ballot are Babur Lateef and Alyson Satterwhite.

Babur Lateef, interim chairman for the Prince William County School Board,  at an October debate. Lateef won the special election to fill the remaining year in the current term for board chair.

Teacher pay, school safety and the politicization of the school board were among the top issues addressed by the three candidates for Prince William County School Board chair during a debate Tuesday evening.

About 150 people attended the debate, hosted by InsideNoVa, the League of Women Voters of the Prince William area and the Muslim Association of Virginia and held at Dar Al-Noor Islamic Community Center on Hoadly Road.

Alyson Satterwhite, who represents the Gainesville District on the board, said the school system struggles to retain teachers because counties to the north and east pay higher salaries.

After investing in and training teachers, “we can’t afford to lose them,” Satterwhite said.

Looking at better health-care packages can help teachers, Satterwhite said. She also noted that the county needs to increase its commercial tax base so more funding can be dedicated to the school division.

Babur Lateef, interim chairman of the school board, said uncompetitive regional teacher pay and large classroom sizes are problems. Superintendent Steven Walts presented budget priorities for school year 2018-19 at the Oct. 3 school board meeting that include both a cost-of-living increase and a step increase for teachers. Lateef said he would advocate to the Prince William Board of County Supervisors that investing in teachers is the right thing to do.

Lateef said he would also advocate to increase tuition reimbursements for teachers who go back to school, noting that there are other ways to get more money to teachers that doesn’t come directly from the county or the state.

Stanley Bender, a retired Woodbridge resident, said teachers are key to the school division. Bender said he would advocate for more career and technical education.

“The problem with this agreement is the number is too low,” Lateef said.

Satterwhite said in 2012 she was part of forming a Brentsville and Gainesville committee, which looked at how to better keep track of funding. She also noted that she helped advocate for a $1 million per year grant from the county to reduce class sizes. Satterwhite criticized Walts’ budget priorities, saying special education funding should be prioritized.

In response to a question about how they would lead the school board with a focus on education and not politics, Satterwhite noted that almost every issue under former chair, Ryan Sawyers was politicized. Satterwhite led a censure effort against Sawyers, and he resigned in the spring.

The Nov. 6 election will fill the remainder of Sawyers’ term, which ends in December 2019, so there will be another school board chairman election next November for a full four-year term.

Lateef said he doesn’t like drama and noted that his name hasn’t been in many headlines since he stepped in as interim chair.

“I have no desire to block someone from getting an item on the agenda,” he said, as long as school division employees have had a chance to review the item.

Satterwhite criticized the school board’s action in June to guarantee an annual pay increase for Walts, whose contract expires in 2021.  She noted that she voted against the increase, which Lateef and the majority of school board members supported.

“This is automatic; if staff gets a [cost of living raise], he gets a COLA,” Satterwhite said. “I voted against it because it’s the wrong thing to do.”

When asked about whether they’d support making school start times later for middle and high school students, Lateef said he would consider it if the community wanted to change them. Satterwhite said an advisory council in 2010 looked into the issue, but starting times were not changed. Families rely on high school students looking out for younger siblings after school, Satterwhite said.

Both Satterwhite and Lateef said they do not support arming teachers, but will continue to support school resource officers. The school division began a pilot program this year — with $500,000 from the board of county supervisors — to hire retired police officers to serve as armed community officers in elementary schools.

During closing remarks, Satterwhite said she’s seen the impact of overcrowded classes and has fought for teacher pay and for respect for teachers during her two terms on the board.

Lateef said he would advocate for equity throughout the division, embrace innovative programs, increase scope of career and technical education, work to get rid of trailers, and train staff for emergency situations.

According to campaign finance reports filed with the Virginia Department of Elections, Lateef raised $82,410 between July 1 and Aug. 31. He started the reporting period with $33,000, leaving his campaign with about $90,598 as of Aug. 31.

Bender received an exemption from campaign finance disclosures because he does not plan to raise or spend money on his campaign.

Prince William County School Board Interim Chair Babur Lateef is out-raising and outspending his two opponents in the race for school board chair.

It is true that there is a blue brainwashing wave happening by taking advantage of young low information voters and promising people things for free(although someone is paying for it, but politicians dont care where the money comes from). But the use of media to portray this idea that the democratic/liberal ideology is the majority is futile. Americans are tired of the lies and misinformation being spread throughout the country from these corrupt politician types. The truth is, there are many more responsible gun owners in America than there arent, and being it's their right to bare them period, as stated in the constitution bill of rights, it is only right that they're allowed to protect themselves and their peers or students at their place of work. I believe if monitored and vetted properly, arming teachers or even security guards or just plain volunteer retired law enforcement or military personnel, would keep our children much safer as statistics show in places which already use these approaches. A candidate who supports this has mine and many others votes.

I hate typing on a phone; appologies for the typos. I know it was approved under Milt Johns because I spoke out at the meeting. I asked how they could go cap-in-hand to the county for more money if they were wasting millions on the cadillac school. Their response was that it was a drop in the bucket compared to the budget. Fiscally conservative they were not.

A blue wave is coming for the school board and with it will come a piano and swimming pool in every school.

The pool, piano etc. was pushed by Walts whise daighter attends that school and approved by the previous board of Johns and Satterwite. It was a done deal when the democrats gained control.

It is not an issue of disagree with more pay, smaller classrooms and fewer trailers! Political powers successfully lobbied Richmond to limit the proffers a developer has to pay for each unit that he offers. In PWC our proffers were kept much much lower then the neighboring counties so our trusted elected Supervisors could get PAC money and keep their Board seats. So now we are stuck, stuck by Richmond and stuck by the failed and selfish efforts led by Stewart the slave of the developer. The budget is only so big, the taxes are huge and we cant afford more and get nothing in return. Try this, in those places where you have gross school overcrowding and/or aging and unsafe schools let the location pay for those in a limited tax to make up for the loss of proffers from our Supervisors. Cut out ALL BS in the budget...pools, top shelf pianos, junkets, etc. When we can get better proffers then developers will be forced to pay for the havoc they have sown.

Jane Fonda: My life had no meaning before activism

Duchess Meghan has no relationship with half-sister Samantha Markle

Celebrating The Sopranos is now streaming