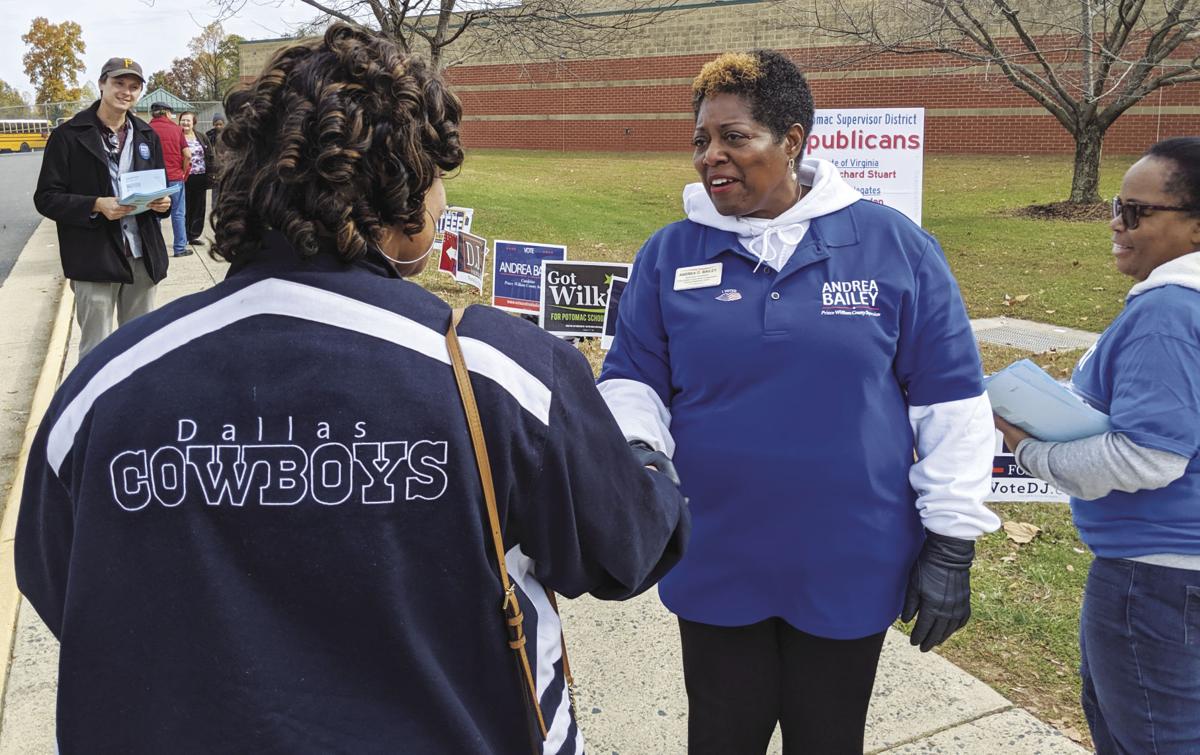 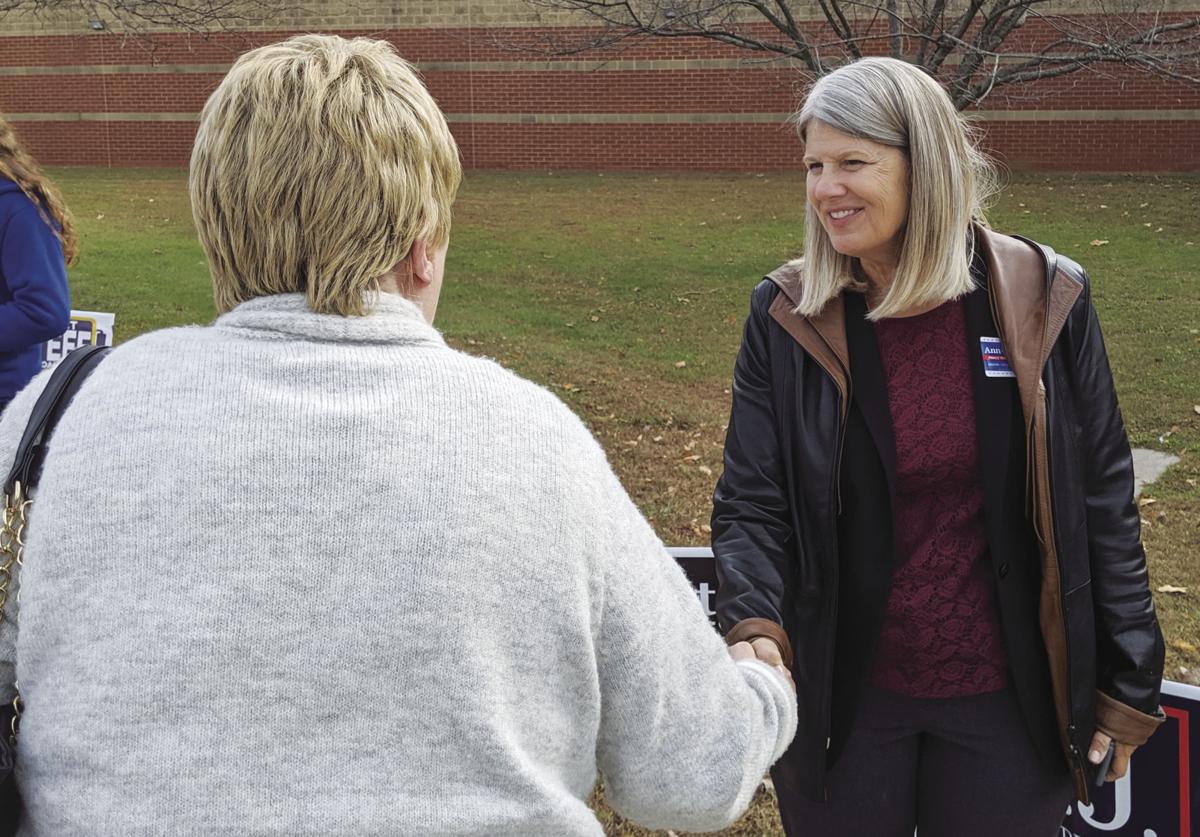 Democrat Ann Wheeler, a candidate for chairman of the Prince William Board of County Supervisors, greets a voter Nov. 5.

Democrats will take control of the Prince William Board of County Supervisors after winning three seats previously held by Republicans.

The unofficial results Tuesday give Democrats at 5-3 majority on the board. It will also mean the new board will be majority minority and majority female.

All results are unofficial until certified by local and state election officials later this week.

With 95% of precincts reporting, Democrat Ann Wheeler is leading with 58,353 votes to Republican John Gray's 36,754 votes.

A former energy consultant, Wheeler initially entered the race to challenge combative Republican incumbent Corey Stewart. But the longtime chairman announced earlier this year that he wouldn’t seek another term.

Gray surprised observers with his GOP primary win in May with a conservative argument against his challenger, Coles District Supervisor Marty Nohe. A certified public accountant, Gray has sometimes battled other leaders in his own party, but showed an ability to connect with its base in the primary.

In 2015, Stewart won re-election with nearly 57% of the vote, but the election cycles since then have offered an increasing shift toward Democrats in this suburban county.

“This campaign has never been about me, it’s about Prince William ,” Wheeler said Tuesday night. “Tonight we’ve shown we can defeat people who aren’t representing us the right way…This is about turning the page.”

In the Brentsville District, Republican Jeanine Lawson won a second full term, defeating challenger Maggie Hansford, 9,070 votes, or 55%, to 7,399 votes, with 85% of precincts reporting. Lawson first won the seat in a special election in 2014 and ran unopposed in 2015. Lawson has been one of the conservative voices on the board. Most recently, she has fought to sideline a review of the county’s preservation efforts in the Rural Crescent.

Vega told InsideNoVa in October that she wants to make sure there is enough personnel to keep the public safe. She has also been critical of the school division’s construction spending.

“I think it’s time we focus dollars in the classroom and ensure teachers receive adequate pay,” she said.

Candland owns a consulting firm that works with nonprofits, and he and his wife own an ice cream shop in Haymarket. Funderburk works in learning and development for William A. Hazel, Inc.

Even among a majority of Republicans, Candland has sometimes stood alone in opposition to board measures — he was against the county’s $355 million road bond because he didn’t like the process the county used.

“I’ve asked several times about what this will mean for tax bills,” Candland said.

In 2015, Prince William County’s Occoquan District already was looking like a battleground for the two parties. Republican Ruth Anderson defeated popular Occoquan Democrat Earnie Porta, 53.9% to 45.8%. Four years earlier, incumbent Republican Supervisor Mike May ran unopposed, and he won in 2007 with 67.2% of the vote.

Boddye is a business development manager for Kevin Davis Insurance Services. Anderson is retired from the U.S. Air Force and previously worked in the nonprofit field.

Boddye said Tuesday that he won because of team work, hard work and connecting to the community.

“So tonight we celebrate, tomorrow we rest and the day after, we govern,” Boddye said. “Oh, and elections have consequences.”

Longtime Supervisor Maureen Caddigan announced earlier this year that she would not seek another term.

“I am so overwhelmed,” Bailey said Tuesday night. “We truly, truly live in a county that is diverse and we can do anything... Let’s get to work.”

Bailey said she looks forward to making sure the board works together and understands what diversity means to the county.

“It feels right,” Bailey said. “It feels like I’ve come into my purpose in my life — to serve people at a higher level and make people’s lives better.”

With new majority, Democrats say they're ready to get to work on Prince William board

After flipping control of the Prince William Board of County Supervisors from a 6-2 Republican majority to a 5-3 Democratic majority, Ann Whee…

The results of this election were entirely predictable.

The PWC GOP had long ago become the province of a very few party operatives, and not public servants.

It was only a matter of time before an electorate whose voices and concerns were not heard would stop hearing the false promises of this inbred group of political wannabes.

Unfortunately, rather than a referendum on a corrupted party organization and self serving petty lords, it will be considered a referendum upon solid conservative values. Which is ironic, since the Republicans on the current Board wouldn't know conservative values if they hit them between the eyes with a 2x4. Which, just happened.

Going forward, it will be interesting to see if this new slate of supervisors will seek to represent their constituents like public servants John Jenkins and Michele McQuigg, or, replicate the mistakes of the current Board, and use Prince William County and its citizens to advance personal political agendas over the greater good of the community.

Time will tell whether this new group learned from the mistakes of the past, or whether it sees this as an opportunity for politics over principle, and power over people.

"When the people find they can vote themselves money, that will herald the end of the republic." "Where liberty dwells, there is my country."

Sad, how brainwashed you are you believe everything the right wing media bubble tells you. Arlington and Fairfax also are not sanctuary counties, they do not shelter illegal immigrants from ICE, they simply like every county in Virginia except for Culpeper and Prince William do not use the 287(g) program.

Glad Stewart is gone. Sad his "to the highest bidder" policymaking will continue under a blue banner.

Add to that - PWC and most likely now the entire state will become a sanctuary state. East coast California

Great so leave and while you're at it if this offends you snowflake stop commenting all the time.

Don't worry once you're done crying we'll finally have some adults running this county.

It's ok... everything's going to be all right... Breitbart was just scaring you...

Loving would be easy if your colors were like my dreams! Happy 60th birthday Boy George

Emilia Clarke reveals Game of Thrones scene SHE WOULD change