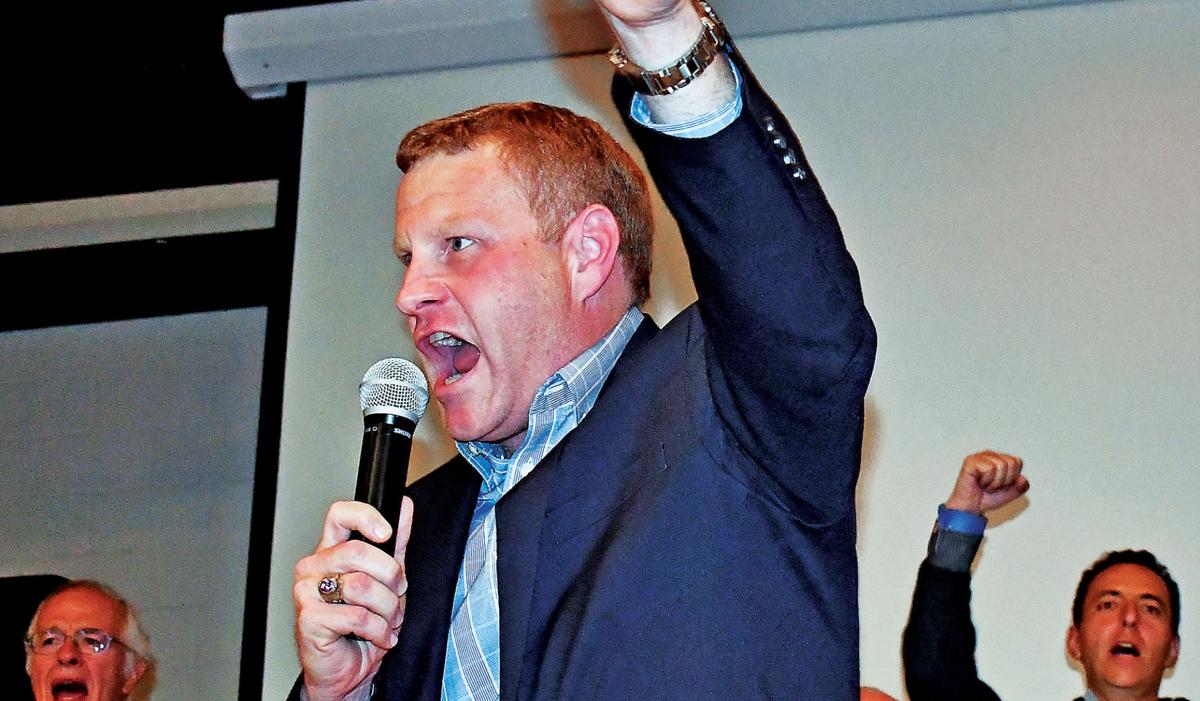 Supervisor Jeff McKay (D-Lee) rallies the crowd at the Elks Lodge in Merrifield Nov. 5, 2019, following his election as chairman of the Fairfax County Board of Supervisors. (Photo by Brian Trompeter) 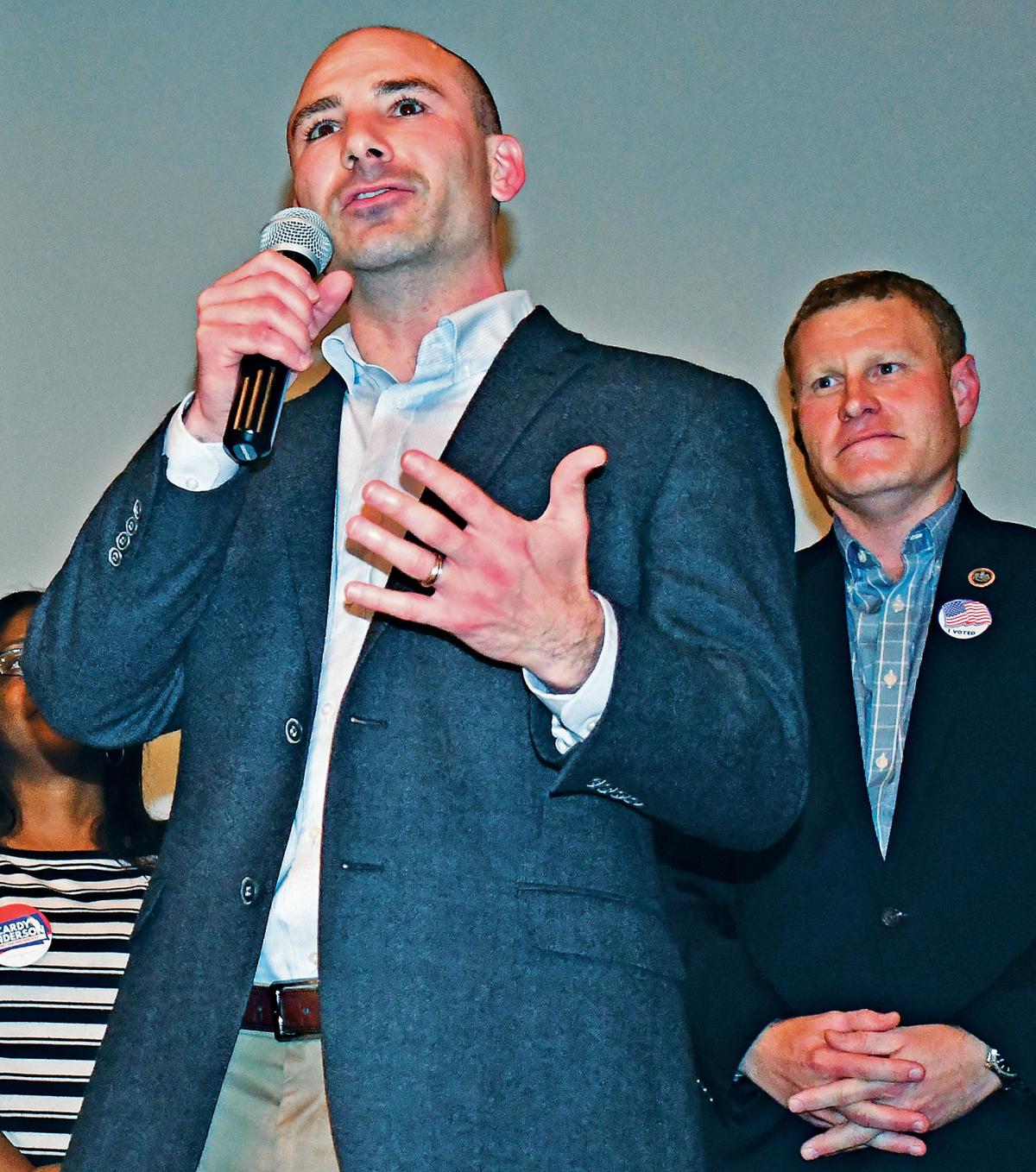 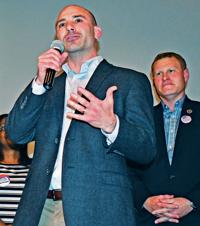 Democrat Steve Descano, who on Nov. 5, 2019, was elected commonwealth's attorney for Fairfax County and the city of Fairfax, addresses supporters at the Elks Lodge in Merrifield along with Fairfax County Board of Supervisors chairman-elect Jeff McKay (D). (Photo by Brian Trompeter)

Supervisor Jeff McKay (D-Lee) rallies the crowd at the Elks Lodge in Merrifield Nov. 5, 2019, following his election as chairman of the Fairfax County Board of Supervisors. (Photo by Brian Trompeter)

Democrat Steve Descano, who on Nov. 5, 2019, was elected commonwealth's attorney for Fairfax County and the city of Fairfax, addresses supporters at the Elks Lodge in Merrifield along with Fairfax County Board of Supervisors chairman-elect Jeff McKay (D). (Photo by Brian Trompeter)

It would be tough to imagine a better night than Nov. 5 was for local Democrats.

Candidates backed by the Fairfax County Democratic Committee secured all but one of the 10 seats on the county’s Board of Supervisors, had a strong showing in the School Board race and beat back an independent challenger for commonwealth’s attorney.

Supervisor Jeff McKay (D-Lee), who was elected Board of Supervisors chairman, was ebullient as he addressed supporters at the party’s victory party at the Elks Lodge in Merrifield.

“What a great night in Fairfax!” he said. “What you’re looking at up here on this stage is One Fairfax, one community that wins together. We don’t divide our community, we lift up everyone and when we do, we win.”

Here are the unofficial results, rounded to the nearest decimal:

FAIRFAX COUNTY BOARD OF SUPERVISORS:

The first Latina ever elected to the board, Palchik said her top priority would be to expand the county’s inventory of workforce housing.

“When people thought that this was a crazy idea, that we would never change a criminal-justice system that had been stagnant for over five decades, everybody in this room said ‘No, we’re going to do it,’” he said. “This is about big ideas. This is about putting Fairfax County on the right side of history . . . You all understood that we didn’t have to choose between safety and justice. We could have a criminal-justice system that treated every single person fairly, regardless of the color of their skin, how much money they made, where they lived or who they were. ”

County voters again backed the school system’s bond package, which this time was for $360 million worth of capital-improvement projects. Voters passed the bond referendum with 225,313 votes (77.2 percent).

Purves was not pleased with the GOP’s results that night.

“Republicans have lost the initiative on the issues,” he said. “Democrats have filled the void with Trump, abortion, climate change and gun control.”

Statewide, Democrats picked up majorities in the state Senate and House of Delegates.

Del. Vivian Watts (D-39th), who defeated Republican challenger Nick Bell, predicted Democrats in the General Assembly next year would act on “a number of bills that have been bottled up forever,” including ones on firearm safety, the environment and redistricting.

“It is crucial that it’s all about non-partisan redistricting, so that we really have the kind of redistricting that keeps communities together, that doesn’t use power for power’s sake, that really makes sure voters have the choices they’re supposed to have,” Watts said.

Regarding environmental legislation, “there are a number of things that we want to keep on pushing – green energy, the issues of carbon emission, making sure that wind power and solar power are really brought online, not just in theory,” she said.

U.S. Rep. Gerald Connolly (D-11th) was delighted with the Democrats’ gains, whether locally, statewide or nationally.

“I’m old enough to remember when Fairfax was a Republican place and I always say to people, you know how you build a majority? Stop whispering and you start proclaiming,” he said “Proclaim progressive values. Proclaim you’re a proud Democrat.”

I don’t usually opine on past or future stock market performance. We can’t change one or predict the other, which makes both largely irrelevan…

Miley Cyrus wants to be remembered for being a 'trailblazer'

New documentary on The Sopranos streams next month