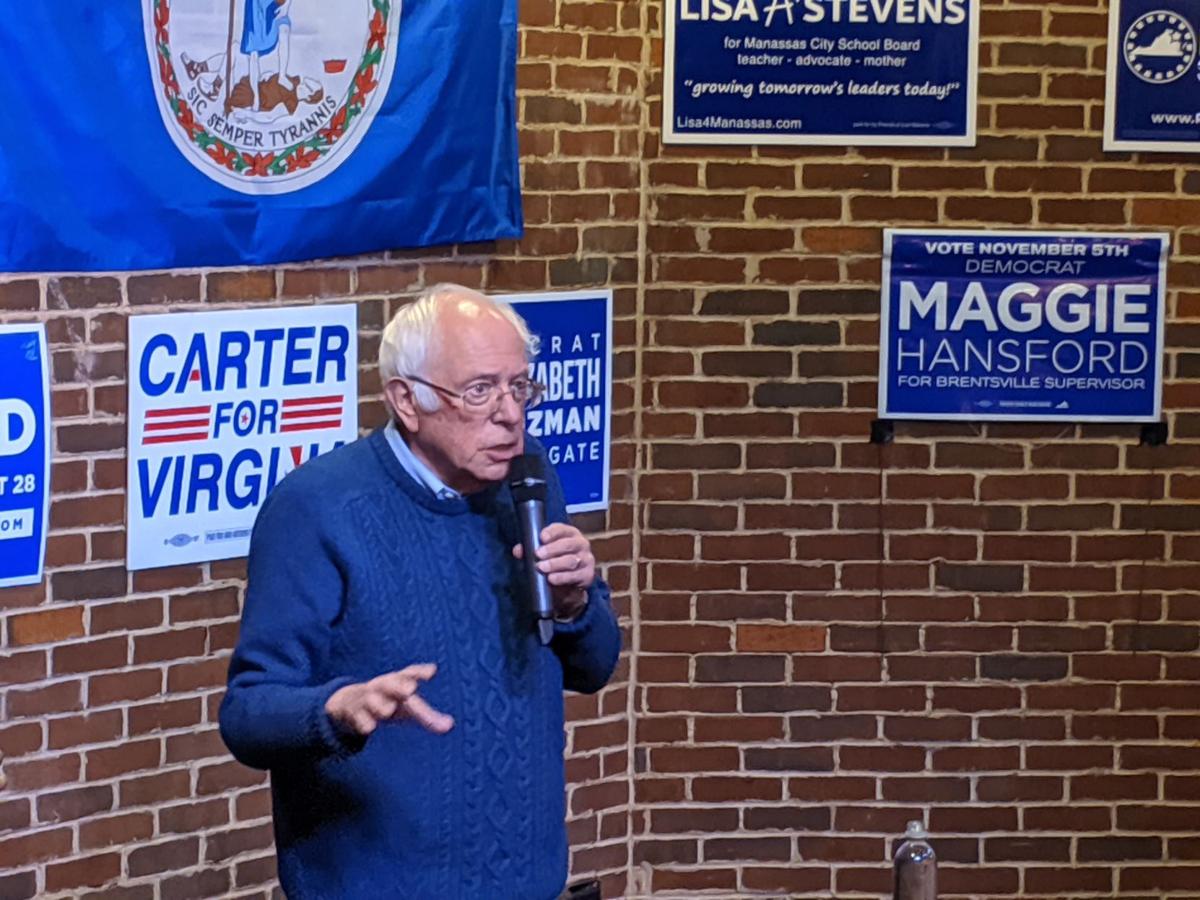 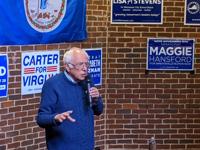 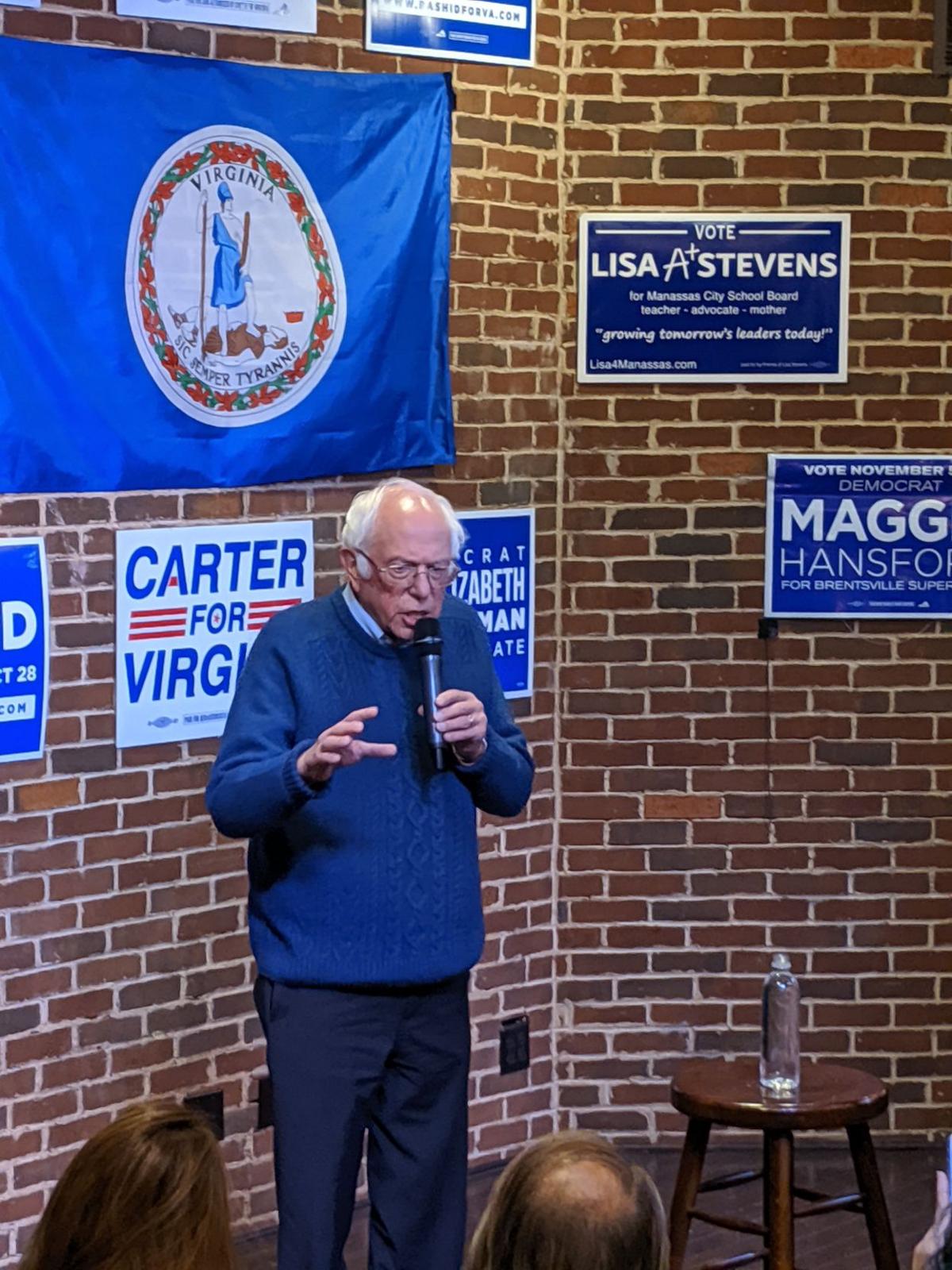 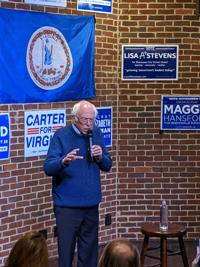 A packed crowd at Jirani Coffeehouse in Manassas heard from Sen. Bernie Sanders, one of the leading candidates in the Democratic presidential primary, as he encouraged support for Democrats on the ballot in Virginia's state and local elections Tuesday.

Sanders said if elected as president, he would advocate for Medicare for all and to raise the minimum wage to $15.

As the son of a Polish immigrant, Sanders said Americans are proud of the country's diversity.

"Trump wants to divide," he said. "We bring people together to work for all of us, not just the top 1%."

Del. Lee Carter, D-50th, said he will represent the working class. He said the general election is about fighting back against corporate interests.

"Vote so we're not owned by Dominion Power," he said.

Carter said important issues facing the General Assembly include redistricting in 2021. He said if elected, he will push for workers compensation reform and to push for union jobs. Virginia is a right to work state, which means workers do not have to join a union.

Yawn. More of the same old, same old from Bernie. All these grand ideas with no mention of how to pay for any of them. Scary how many are drinking his kool aid, though.

Compared to those drinking the Trump cool-aid? Where's the great health care plan he promised? Since Reagan destroyed the middle class, kids can't afford college without crippling debt and they can't get healthcare without their parents.

Something has to change; it's not all about guns and abortion rights.

I'm perfectly healthy with my health care. Bernie wants to take it away. 0bama promised we could keep our health care and doctors. That clearly was a blatant lie. Bernie is a liar as well.

Reagan did not destroy the middle class and Trump has been blocked by judges, and Dem and Repub politicians at every turn, not to mention the media haranguing him day and night. Where was that media coverage when Obama was in office. Fair and impartial my arse. Kids can't afford tuition for college because these so-called institutes of higher learning keep hiking their prices and if you are dumb enough to take out a high-interest loan or any loan which you plan on not paying back then you deserve the consequences. In Democrats minds, it is all about taking gun rights away and killing babies all the way up to birth(infanticide).

If you ignore the CNN, MSDNC, etc. propoganda machines and look at factual data, you would see the stock market and employment figures are booming. Just about the only people not working now are the ones that choose not to while waiting for all of the free stuff from Bernie and his fellow Communists.

Was a health care plan promised? I missed that. I’m not a fan of Trump but I can tell you that I’m not a fan of single-payer health care, either. I know friends in a Britain who hate their NHS. The wait times are long which indirectly led to the death of one and exacerbated the health condition of another. There are all sorts of problems with this model. You only need to read their healthcare news. In Britain, if there is malpractice, the government healthcare system is sued. Now, with the huge settlements in the US, that will bankrupt the system alone.

Also, you may like to research the salaries and benefits paid to professors and administrators, the cost of unionization, the cost of expensive buildings, and how tuition helps to provide for others who can’t pay through work study, grants, and scholarships. There are still affordable college options. Years ago, everyone didn’t have to go to an Ivy League school or a Public Ivy. Today, everyone shoots for the big names. Unfortunately, there are many kids who shouldn’t go to college and would do better to pursue entrepreneurship, apprenticeship, or trade schools.

Here's just one of many times it's been promised.

Thanks, EdP. I’d heard about the drug costs and health reimbursements but as I said in this, I missed a health care plan. Again, I’m against a single payer for some of the reasons I stated.

Bernie is a socialist who basically promises "free stuff for everybody". The reality is that his policies would result in HUGE tax increases for everyone. It would result in our country losing millions of jobs and the economy, which has been robust, going down the tubes. Bernie and anyone who is running with him should not be trusted or believed.