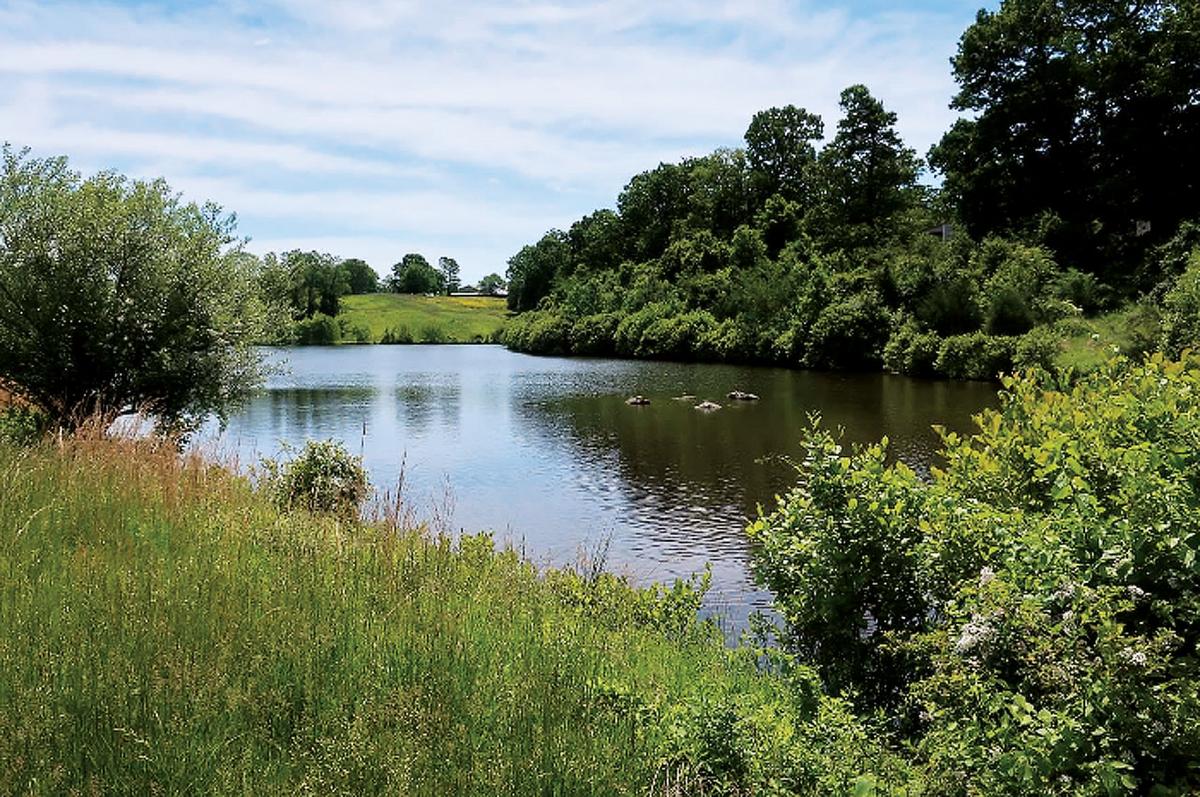 This pond and other pastoral features of the Lochmoor Farm property on Utterback Store Road in Great Falls would be preserved under a proposed agricultural-and-forestal district, which Fairfax County officials are reviewing. 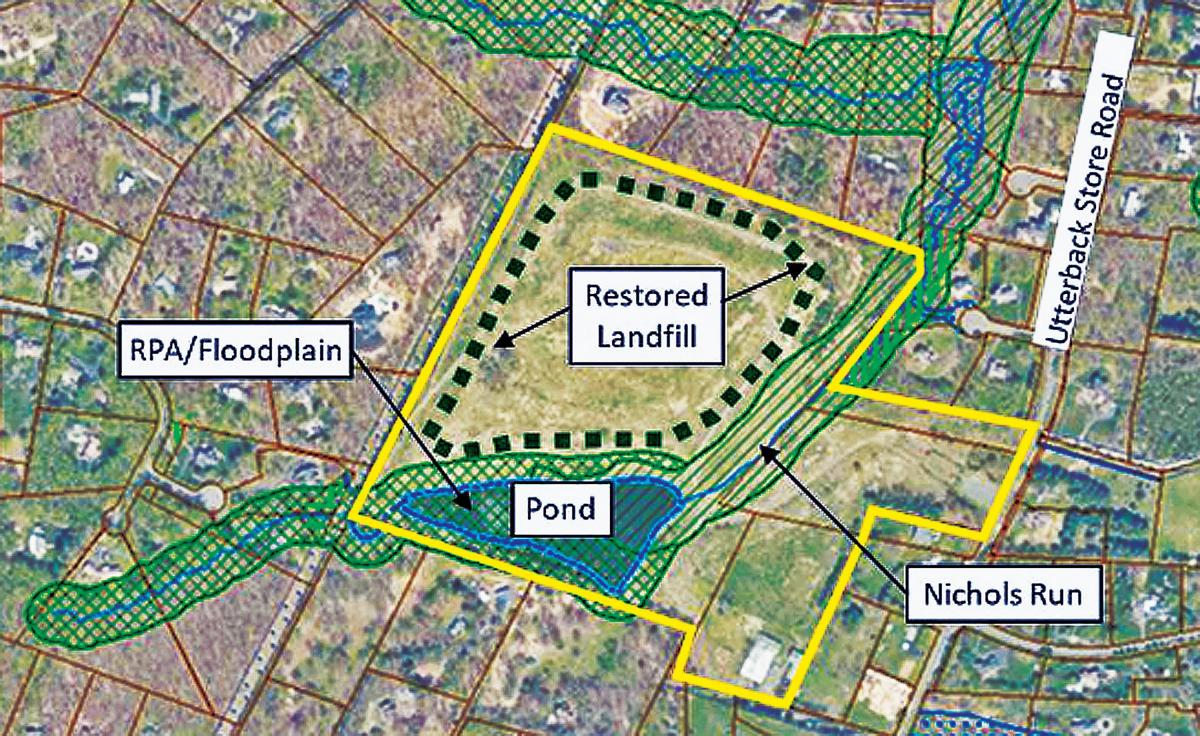 This view shows the layout and location of the Lochmoor Farm property on Utterback Store Road in Great Falls, which is being proposed for an agricultural-and-forestal district. (Photo contributed)

This pond and other pastoral features of the Lochmoor Farm property on Utterback Store Road in Great Falls would be preserved under a proposed agricultural-and-forestal district, which Fairfax County officials are reviewing.

This view shows the layout and location of the Lochmoor Farm property on Utterback Store Road in Great Falls, which is being proposed for an agricultural-and-forestal district. (Photo contributed)

A new agricultural-and-forestal district may be coming soon to a former dump and zoo site in Great Falls.

The Fairfax County Planning Commission on Oct. 2 unanimously recommended that the Board of Supervisors approve a proposal by May Properties IV LLC to establish such a district on 68.63 acres at 730, 734 and 820 Utterback Store Road for an initial eight-year term.

In exchange for agreeing to preserve the land, the applicant would receive a reduced real estate tax assessment. If the applicant removed the property from the district before the term’s end, the county would require payment of the rolled-back taxes, plus a penalty.

The five-parcel site, known as Lochmoor Farm, was purchased in 2017 by the applicant’s principals, John Phat Nguyen and Hanna Chakarji.

“We have no intention of developing it,” Chakarji told the Commission. “As long as our family owns it, we really do not want to put up homes. We want to keep it in its present state, which is beautiful, and keep it for our children and for our families hopefully for perpetuity and put it into a trust.”

The site formerly was used as a landfill nicknamed the “Stump Dump,” which initially accepted tree stumps, but later also construction debris and waste from the Central Intelligence Agency and foreign embassies. The dump stopped accepting waste in 1989 and officially was closed in 1995.

The Virginia Department of Environmental Quality (DEQ) monitored the site for nearly 20 years afterward and ceased doing so in 2016. DEQ officials have recommended that the property’s owners maintain and monitor the landfill’s cap to ensure it stays intact.

The property now contains stables and now actively is used for agricultural purposes. The property owners raise goats to sell to area restaurants and last year obtained 1,000 pounds of tomatoes from a 40-by-40-foot garden on the property. The owners wish to “develop the property as a fully functioning, pesticide-free farm with a minimum of two acres devoted to native wildflowers,” according to the county’s staff report.

Less than one acre of the site is under residential uses and about one-quarter of the property is located within a Resource Protection Area (RPA). The Northern Virginia Soil and Water Conservation District has produced a plan that recommends using fences to keep grazing animals out of the RPA and to isolate some areas for rotational grazing, said Planning Commission member John Ulfelder (Dranesville District).

The applicants have agreed to put fencing in the watershed area around the site’s pond, and they already have two rotational grazing areas, Chakarji said. They also are proposing to demolish a caretaker’s residence that is in poor condition and replace it with a new one.

The property owners now have 49 goats, two cows, 20 chickens and seven ducks on the property and hope to introduce sheep and beekeeping operations. They also would like to grow grapes and potentially have a winery, but acknowledge this would require extra regulatory hurdles.

Community members have expressed concern about potential noise and traffic if a winery is permitted on the property, Ulfelder said. The site is accessible only from Utterback Store Road, which likely qualifies only as a collector street, he said.

Any winery proposal likely would not be considered a by-right use, county planning staff said.

The discussion was unusually rural in nature, with Chakarji saying he and his partner did not want more cows on the property because they deposit manure everywhere.

Ulfelder and Chakarji also traded stories about goats’ intelligence and odd behavior. Chakarji noted the animals eat all kinds of things, including tin cans, and Ulfelder brought up the book “Never Kiss a Goat on the Lips: The Adventures of a Suburban Homesteader,” by Vic Sussman, whose wife often came down with poison ivy because she nuzzled the family’s goats, which were munching the vines outside the property.

The case was the most interesting agricultural-and-forestal matter brought before the Planning Commission in a long while, noted Chairman Peter Murphy (Springfield District).

“Let’s hope it is the start of a new and expanding land-use trend in our urbanizing area,” said Ulfelder, who added another new 50-acre agriculture-and-forestal-district proposal in Great Falls likely would come before the Planning Commission soon.

Shania Twain: Don't tell me what I should look like!