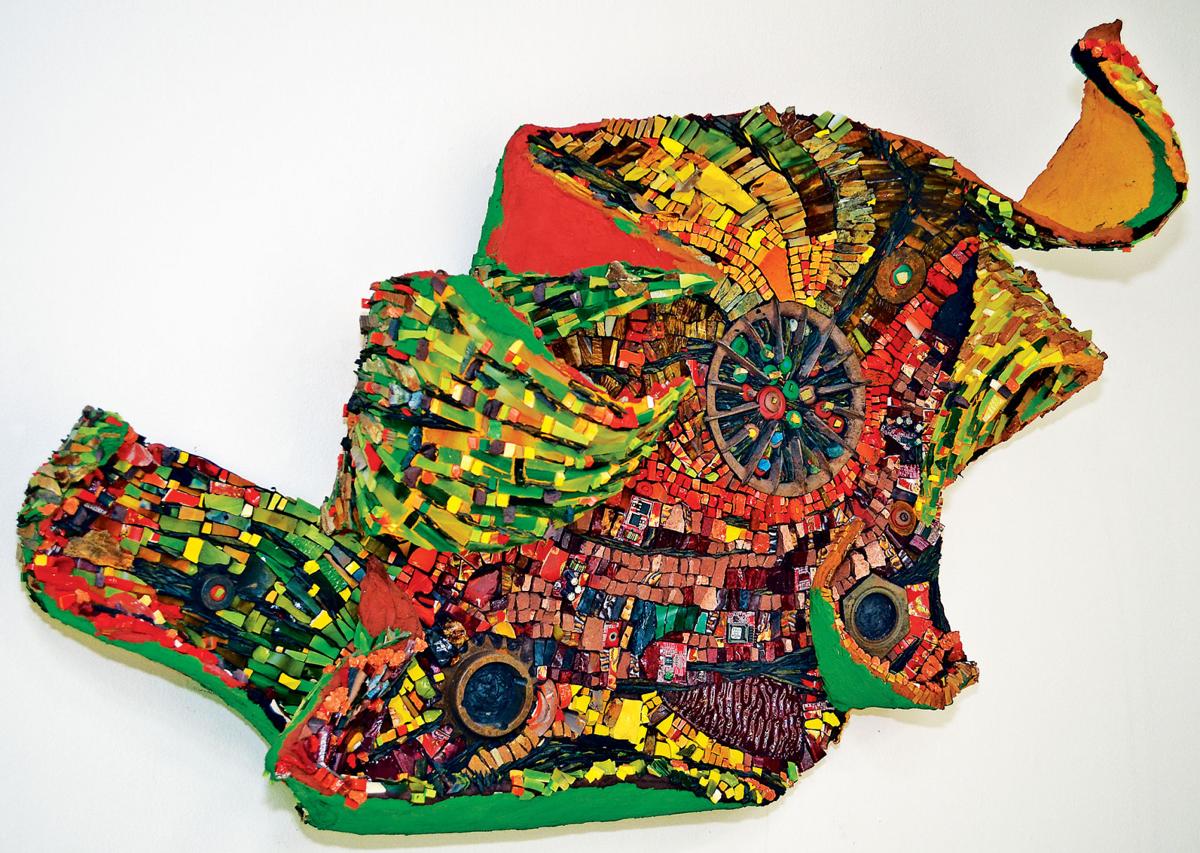 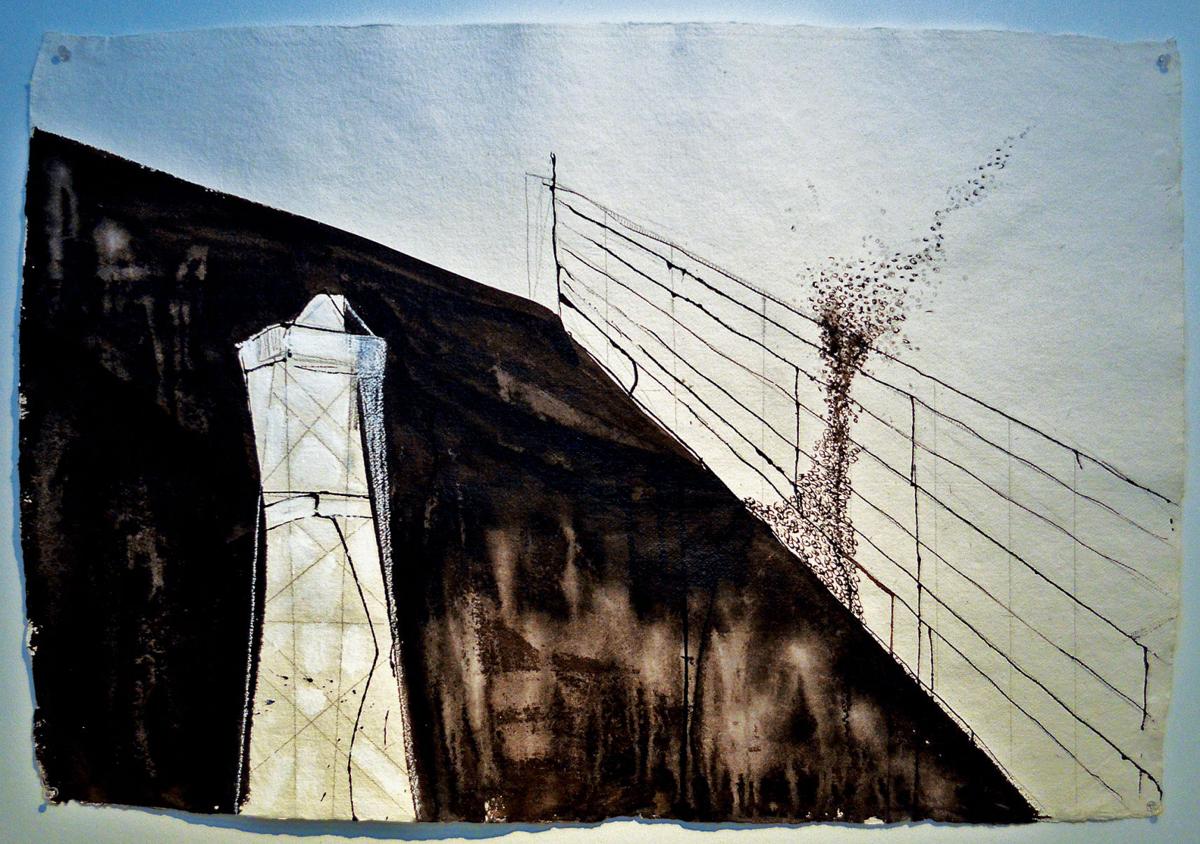 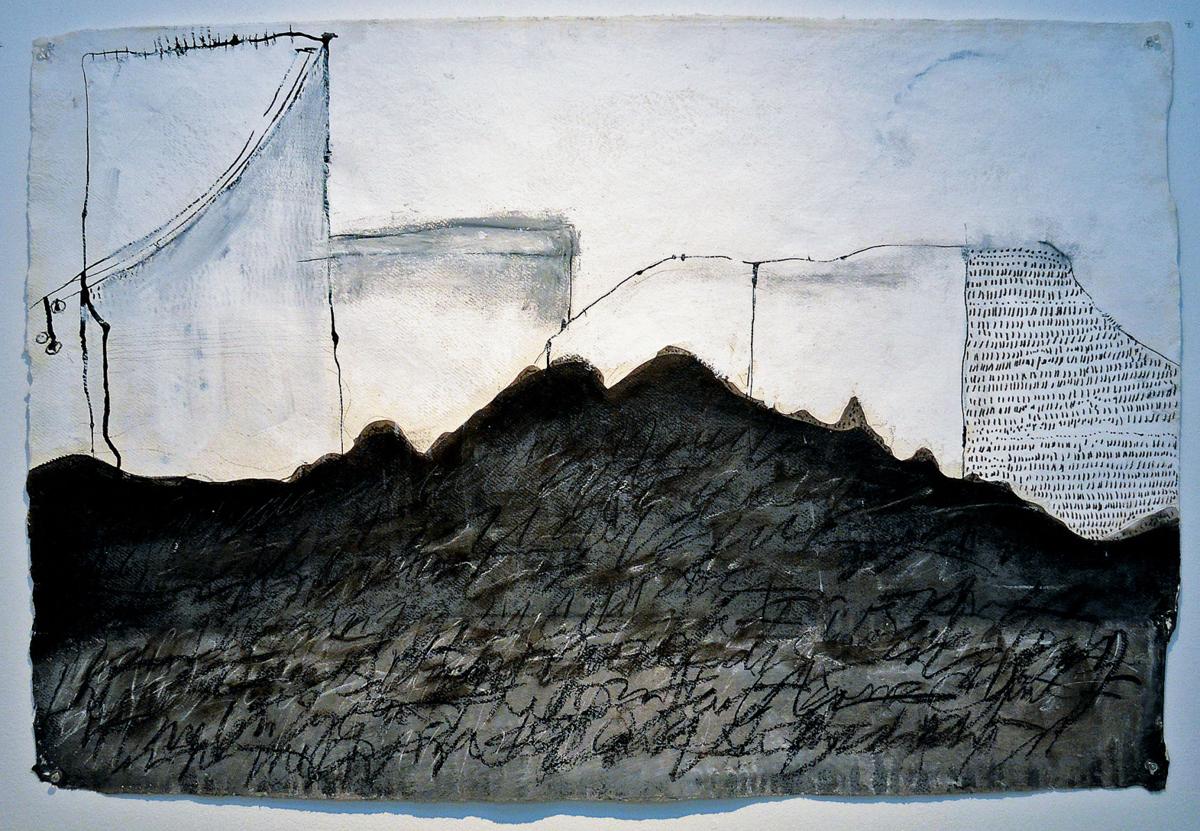 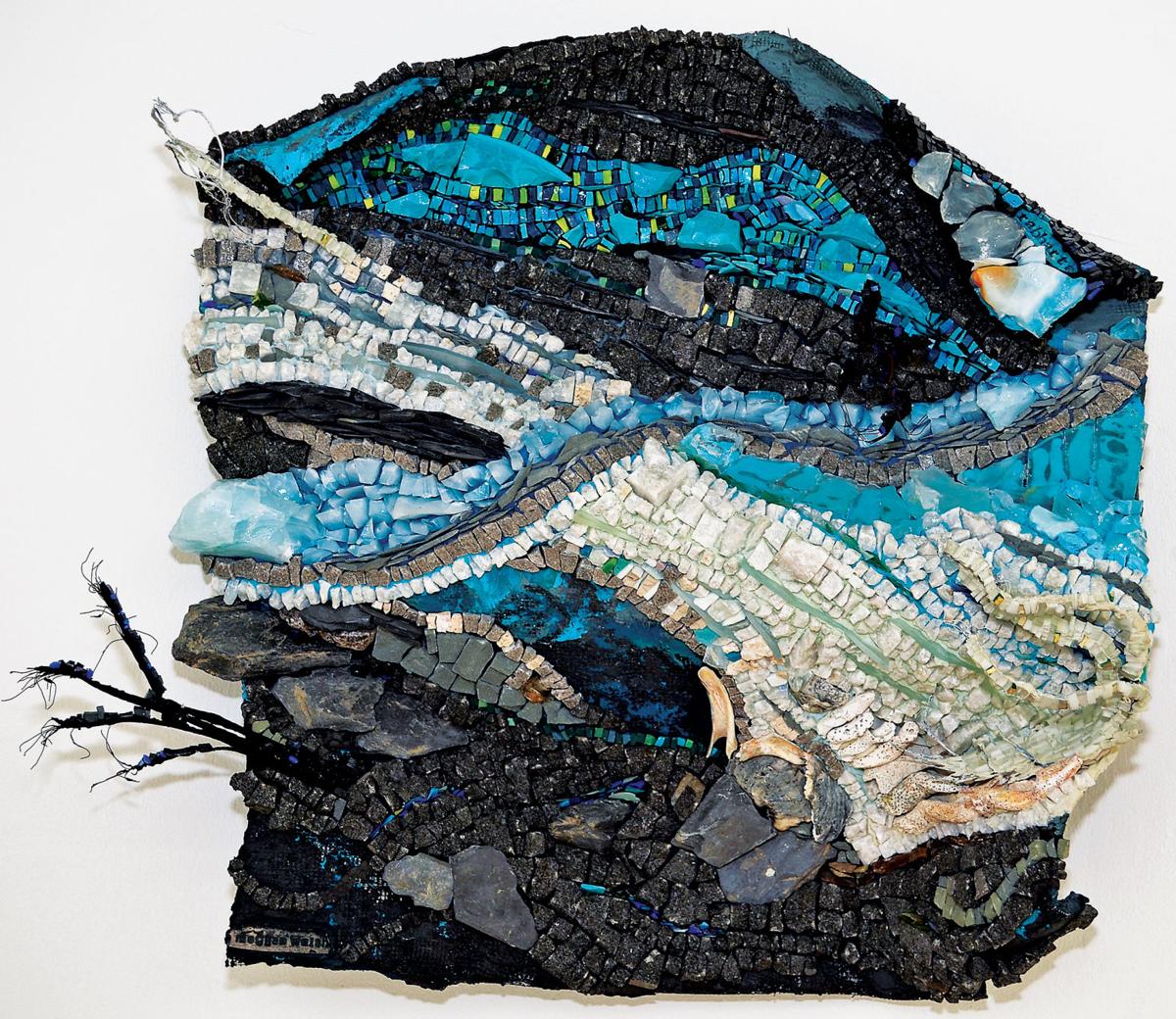 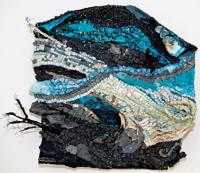 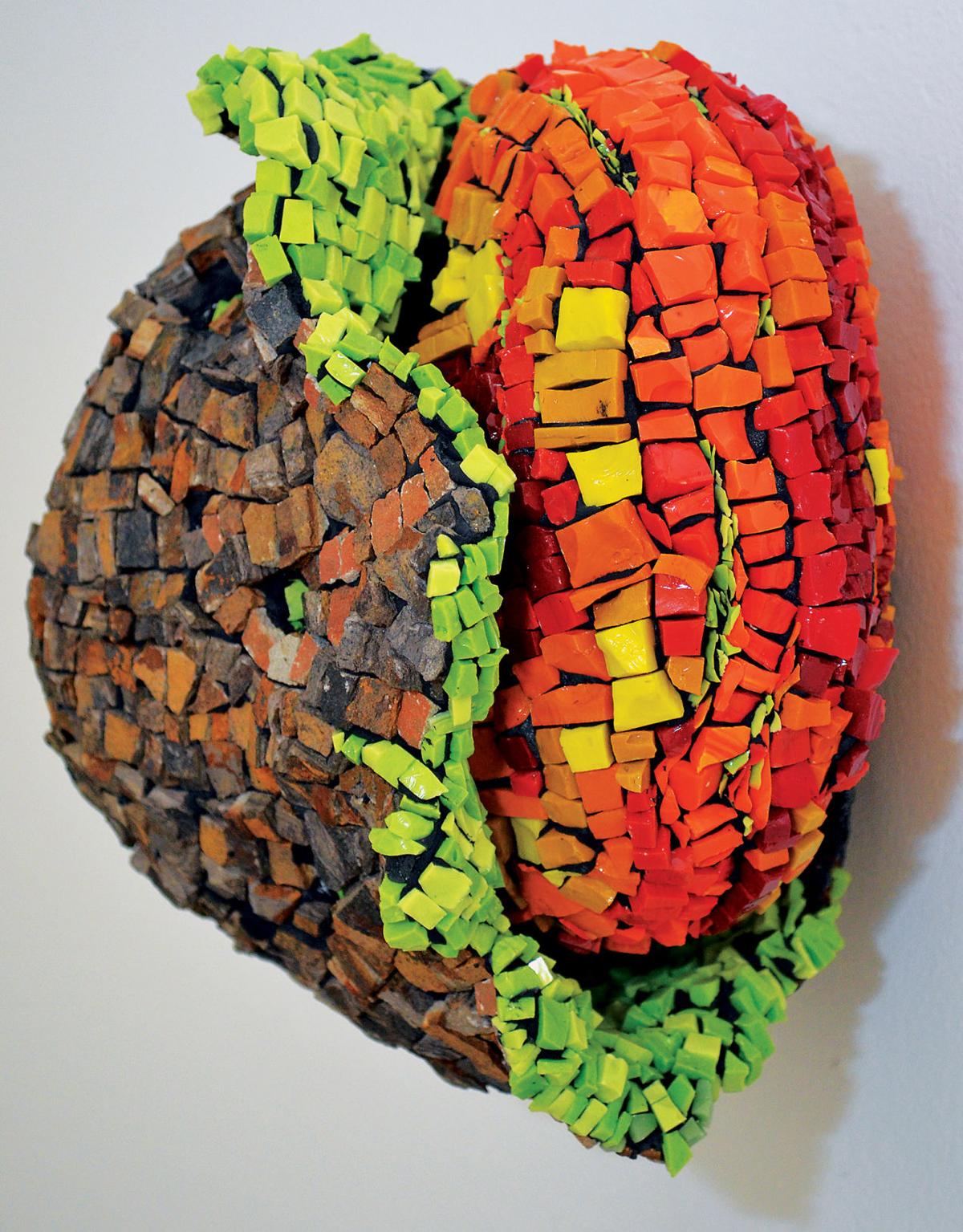 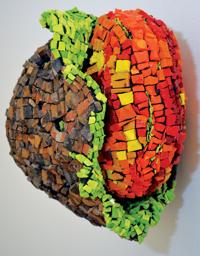 The McLean Project for the Arts’ (MPA) latest exhibits provide a fine study in contrasts.

In the Emerson Gallery is a display of Meghan Walsh’s colorful, three-dimensional, mosaic sculptures, titled “An Fharraige Fheargach: The Fiery Sea.”

Walsh’s artworks, most of which hang from walls, have an organic, free-flowing appearance – not exactly what one expects from someone who also works as an architect.

“I was blown away, seeing it all together,” said Nancy Sausser,  MPA’s exhibitions director, of the works she saw on a tour of Walsh’s studio in Washington, D.C.

Walsh builds her sculptures on flowing, curving background material, or substrate, made of wire mesh and covered with a plaster-like substance. Sometimes that material is a discarded piece of a steel-belted radial.

“It’s pretty much impossible to cut, so she uses it in the form that she finds it,” Sausser said.

What goes on top of the substrate is a wildly varied collection of found objects, from colored glass, slate and terra-cotta to ceramic plates, shells, rocks and pieces of circuit boards, amethyst and horseshoe crabs. Some odd-looking ceramic pieces included with some of the works are pyrotechnic cones used in kilns to determine how far firing had progressed.

“She has a way of making things that are not precious look precious,” Sausser said, adding that Nathan cuts the various pieces in a slow, meditative manner using a chisel over a log.

Sausser arranged Walsh’s artworks by color and shape to give the impression of  “fire moving into water.”

Walsh’s sculptures, all of which have translated Gaelic titles, feature plenty of striations, mimicking the way rock layers form in the Earth. Some resemble landscapes, others plants or otherworldly creatures.

The organization’s Atrium Gallery is home to “Some Pieces of the Nature of Things,” a collection of Miriam Mörsel Nathan’s stark, two-dimensional ink-on-paper drawings.

Mörsel Nathan’s works use small, vulnerable lines that symbolize the fragility of life, an allusion to the Holocaust. Her father escaped the Nazis by fleeing to the Dominican Republic, but her mother could not obtain a transit visa through the United States and was sent to the Terezin concentration camp in the former Czechoslovakia. She survived and reunited with her husband after the war.

But the artist’s grandparents, aunts, uncles and at least one cousin ended up being killed, many of them at Auschwitz.

“She has an embedded family history that comes out in these drawings which are a combination of free-flowing abstractions,” Sausser said. “It’s almost like it’s dripping from the subconscious. She’s not planning these pieces ahead at all.”

That working process comes through in a collection of smaller drawings in the exhibit. The larger works have a similar feel, but more of a coherent narrative, with hints of landscape, Sausser said.

Mörsel Nathan said she does not do smaller works as studies for larger ones and prefers to work in a natural, organic way.

“As the series evolved, it included both small-scale and larger works and in each case, the work was a continuum of earlier work, but also an experiment with ink,” the artist said.

She works only on paper, a medium that seems fragile, but survives even after being torn, soaked and crumpled.

“I make a mark and respond to it,” she said. “I might start with the scale of the piece in mind, or a color. But after that, I simply begin. And then I respond. It’s almost like a dance.”

The artist, who lives and works in Silver Spring, Md., was a poet before taking up visual arts more than two decades ago, but she no longer actively writes poetry.

“Poetry, words, language, text, calligraphic marks/gestures often enter my work,” she said. “In my mind, my small-scale works reflect a connection to books, the page, something one can hold in one’s hand.”

MPA, which this summer moved back into the renovated McLean Community Center, no longer will be displaying works in its former Ramp gallery, which leads up to MPA’s offices from the building’s front entrance.

The current exhibits will run through Nov. 16. MPA is located upstairs at the McLean Community Center, 1234 Ingleside Ave., and is open Tuesdays through Saturdays from 10 a.m. to 4 p.m. For more information, call (703) 790-1953 or visit www.mpaart.org.

Josh Hartnett: Stepping away from Hollywood was best for my mental health