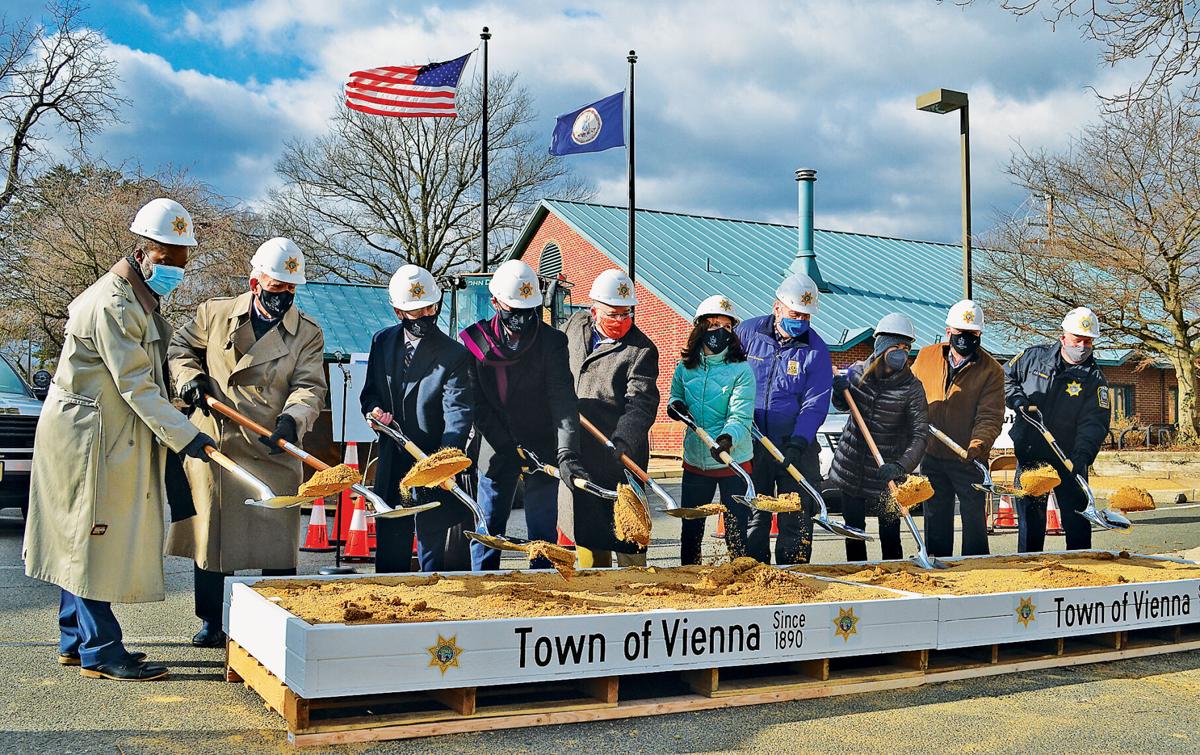 Vienna officials break ground Jan. 29, 2021, for the town's new police headquarters, which will offer improved amenities and capabilities for officers and community spaces as well. (Photo by Brian Trompeter) 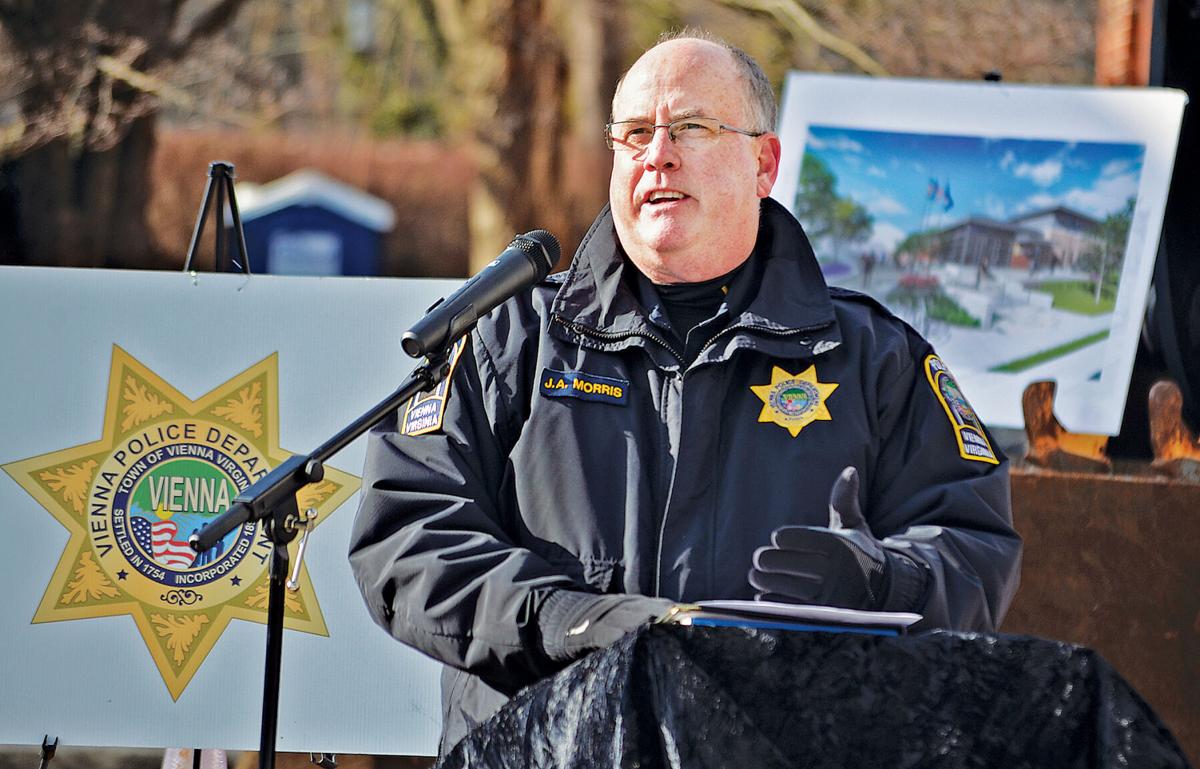 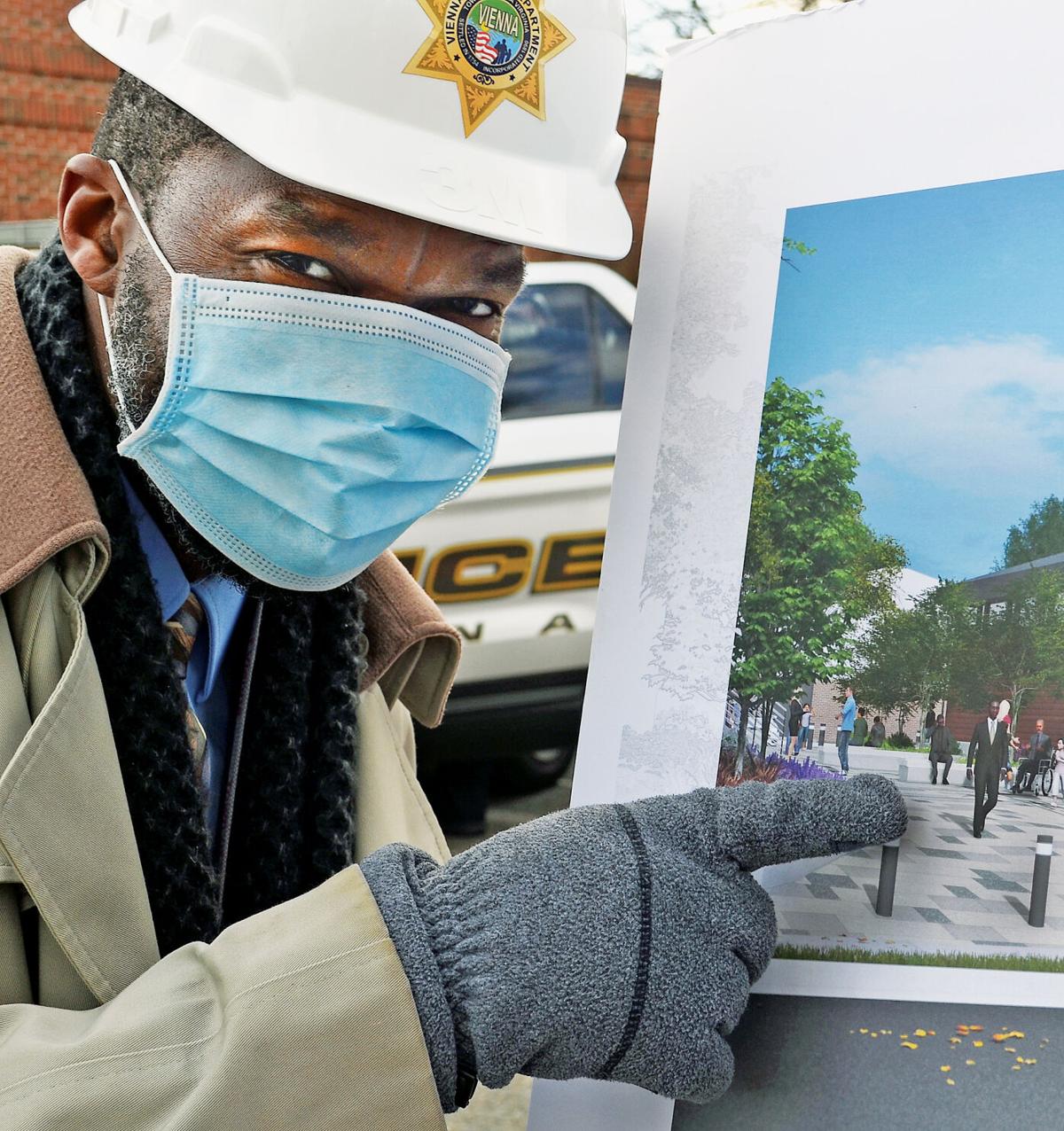 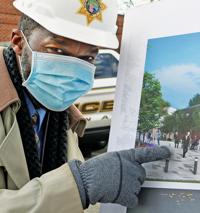 Vienna Town Manager Mercury Payton playfully points out how architects included him in some renderings of the town's new police headquarters, for which officials broke ground Jan. 29, 2021. (Photo by Brian Trompeter)

This cake, complete with toy trucks and a rendering of the future Vienna Police Headquarters, awaited attendees following the Jan. 29, 2021, ground-breaking ceremony for the new building. (Photo by Brian Trompeter)

Vienna officials break ground Jan. 29, 2021, for the town's new police headquarters, which will offer improved amenities and capabilities for officers and community spaces as well. (Photo by Brian Trompeter)

Vienna Town Manager Mercury Payton playfully points out how architects included him in some renderings of the town's new police headquarters, for which officials broke ground Jan. 29, 2021. (Photo by Brian Trompeter)

This cake, complete with toy trucks and a rendering of the future Vienna Police Headquarters, awaited attendees following the Jan. 29, 2021, ground-breaking ceremony for the new building. (Photo by Brian Trompeter)

Vienna officials on Jan. 29 pitched ceremonial shovelfuls of dirt to kick off construction of a new police headquarters that they said better will meet the needs of officers and the public.

The department’s current station already was too small when it was built in 1994 and lacked sufficient storage areas, secured parking and adequate locker-room space for female officers.

The new two-story station, which was designed by Dewberry and will be built by Hoar Construction at a cost of $13.9 million, will have about 30,000 square feet of space and be built on the site of the current station at 215 Center St., S., plus an adjacent property at 114 Locust St., S.W.

The project will take up to two years to complete. Town officials hope the facility will earn Leadership in Energy and Environmental Design (LEED) Silver certification.

A key new feature will be a 1,500-square-foot space for community meetings, officer training, police-taught courses, voting, overflow seating for public meetings, cable broadcasting and an emergency-operations center, if necessary.

“I am so excited that we will no longer have a substandard police station,” she said. “We will have a state-of-the-art police station for our outstanding police force.”

One of the reasons why Vienna consistently ranks high as a place to live in the U.S. is because of the safety that’s protected by the town’s police force, Colbert said.

“They keep our citizens safe and they do it in such a personable and caring way,” she said.

Vienna Police Chief James Morris, who has led the department since 2013, credited the station’s project-management team for shepherding the initiative and praised the local firms taking part in the building’s design and construction. He also thanked various town departments for their efforts.

“You can tell this is going to work, just by the dynamic we have going,” Morris said.

“It’s been a collaborative effort every step of the way,” agreed architect Rod Williams of Dewberry, adding he hoped the public would be pleased with the final result.

“We want people who work [in] and visit the building to somehow be inspired by what we’ve done,” he said.

The new station will have a sizable amount of space that will be shared by other town departments and will offer more opportunities for public interaction, including community meeting space and an attractive outdoor plaza, said Deputy Police Chief Daniel Janickey.

The future station will “be a tremendous improvement for us,” with the latest technology and areas where officers can process crime-scene evidence properly, Janickey said. A new three-lane firing range in the basement will replace the current one and offer better technology and ventilation, he said.

Afterward, attendees walked past the police station and its red dumpster full of discarded building materials and entered the gymnasium of the former Faith Baptist Church building for coffee and cookies. There even was a ceremonial cake dotted with tiny construction trucks and a rendering of the future station.

The Town Council purchased the church property last September for $5.5 million and the police department is moving some of its operations there while the new station is built. Officers’ weights and exercise equipment were positioned along the walls of the gym where post-ceremony socializing occurred.

Ruth Rohr, the department’s records and communications coordinator, noted that she, Sgt. Peter Elias and Master Police Officer Erik Hall were the only remaining department members who also witnessed the ground-breaking for the current station.

While that station is inadequate, Rohr associates many fond memories with it, including its being the site of her first baby shower. Her daughter later was interviewed in the same room about becoming a police officer (she since has switched to the Fairfax County Police Department).

Town officials labored about a decade to lay the groundwork for the new station, said Council member Howard Springsteen.

“It feels like a lifetime, but this is a major accomplishment that we’re starting today,” he said. “This has been several Councils, several mayors. It really reflects what a nice community Vienna is.”

The new station will keep safe and give them the tools they need to function well, said former Vienna Mayor Laurie DiRocco.

Many people pulled together to make the new station a reality, said Town Manager Mercury Payton, who had fun pointing out how architects’ renderings of the new station had featured “Easter eggs” of him in the crowd.

Payton previously oversaw construction of a new police station when he was working in Manassas Park, and said Vienna’s future station will be much more community-oriented.

“We’re going to have meetings here, we’re going to have people from the public come here to have different events and it’s going to be a gathering place,” Payton said. The new station will be “enough of a fortress, but truly a community-integrated building,” he said.

Jesse Tyler Ferguson: I am 'unaffected' by my son's vomit