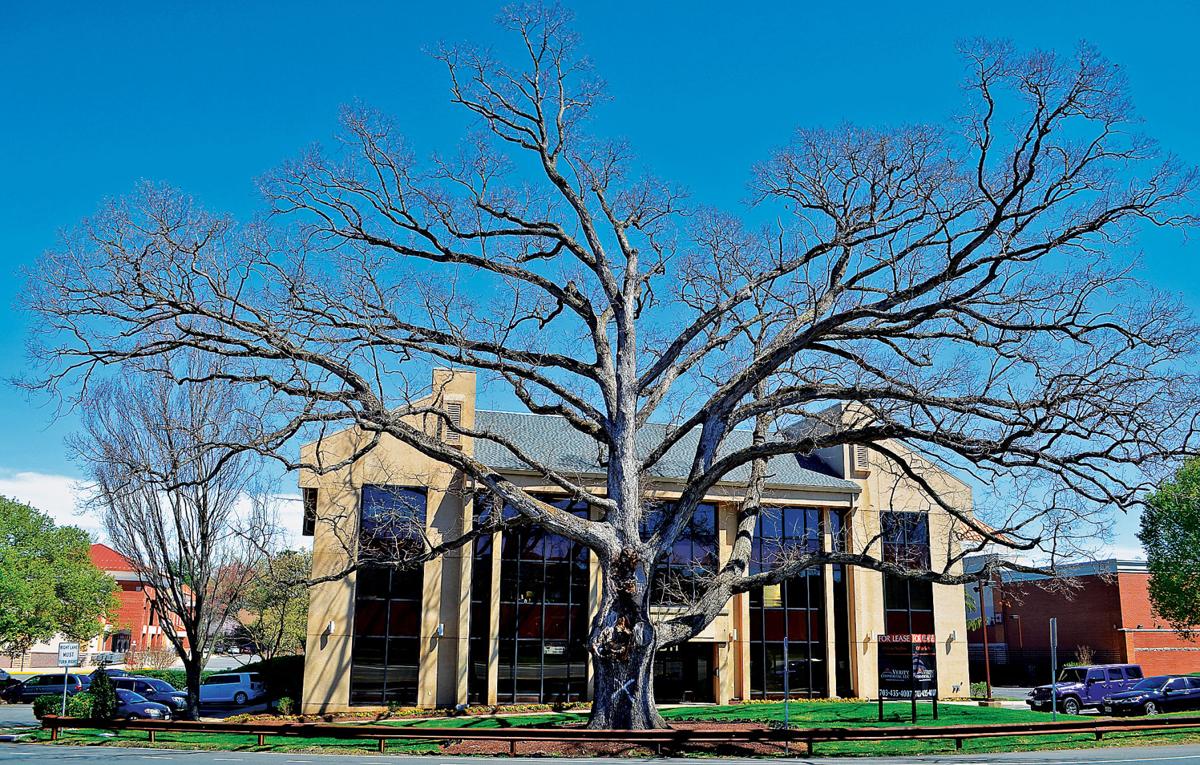 This view of the "Mosby Oak" in Oakton, taken on the opposite side of Hunter Mill Road, shows the sprawling reach of the white oak's branches. (Photo by Brian Trompeter) 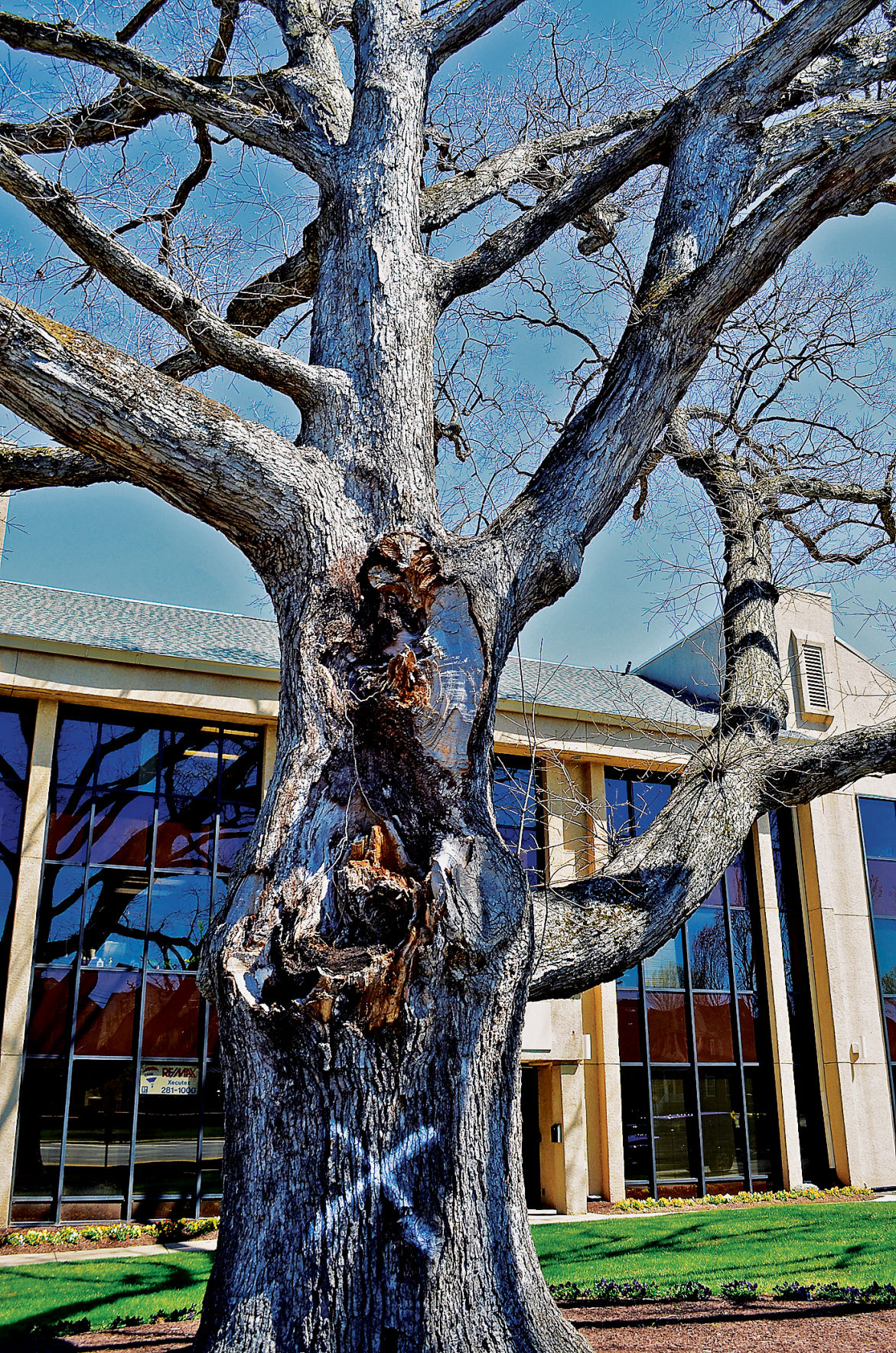 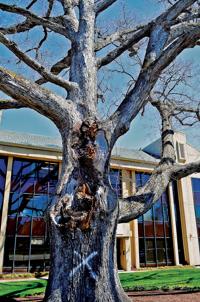 The "Mosby Oak" on Hunter Mill Road in Oakton had been scheduled to be cut down after losing a massive limb in late July 2019, but local residents prevailed upon the Virginia Department of Transportation to work with the property owner and find ways to save the white oak. (Photo by Brian Trompeter)

This view of the "Mosby Oak" in Oakton, taken on the opposite side of Hunter Mill Road, shows the sprawling reach of the white oak's branches. (Photo by Brian Trompeter)

The "Mosby Oak" on Hunter Mill Road in Oakton had been scheduled to be cut down after losing a massive limb in late July 2019, but local residents prevailed upon the Virginia Department of Transportation to work with the property owner and find ways to save the white oak. (Photo by Brian Trompeter)

The massive white oak tree that has loomed over Hunter Mill Road a few hundred yards north of Chain Bridge Road since before the Civil War just got a last-minute reprieve.

The tree’s thick trunk has a white “X” spray-painted on it right below the jagged area where a major limb broke off after a lightning strike last July, indicating the tree was slated to be cut down.

The tree was scheduled to be removed sometime in mid-April, a Virginia Department of Transportation (VDOT) spokesman told the Sun Gazette. But after several Oakton residents expressed dismay over the impending removal, VDOT officials looked into the matter further and decided against cutting down the tree – for now.

“We are not going to remove the tree at this time,” wrote Allison Richter, a VDOT assistant director in charge of Fairfax and Arlington counties, in an e-mail to residents seeking to preserve the tree. “Rather, our arborist will prepare a report detailing his suggestions for resolving this situation another way.”

The limb that separated from the tree last summer fell onto VDOT’s right-of-way. To prevent this from happening again, it may be necessary in the future to remove the tree, Richter wrote.

Representatives from Van Metre Cos., which owns the commercial property abutting the tree to the east, were “very well aware of the significance of the tree – so much so that they have already had a couple of arborists out” to assess its condition, said local historian Jim Lewis.

“The good thing is the tree has been determined to not be diseased,” Lewis said.

Saving the tree likely will require a partnership between VDOT and Van Metre, Richter wrote.

“We would appreciate the opportunity to discuss the alternatives that will allow us all to work together to protect the tree, VDOT’s property and Van Metre’s property,” she wrote, adding that she would set up a virtual meeting once the parties developed a list of possible solutions.

“I’m sure that together we can figure out the best way forward,” Richter wrote.

“My notes indicate that the tree was saved at a cost of $8,000 at the time when Hunter Mill Road widened on its southern end, as a result of its acknowledged historical significance,” Lewis said.

According to Lewis, the tree was nicknamed the “Mosby Oak” because of an undated incident in the Civil War. Alexander Haight, a Quaker, was a known Union informant who’d had several run-ins with Confederate Col. John Singleton Mosby.

Mosby, whose derring-do as a guerilla fighter had earned him the moniker “Gray Ghost,” reportedly had issued Haight a “cease or you will be deceased” order, Lewis said.

Haight decided to join the Union army, and as he and some fellow farmers were traveling south on Hunter Mill Road, they espied blue-clad cavalrymen sheltering from the rain under the massive oak. Haight reportedly yelled, “This is great – boys, we can join the army here!”

Unfortunately, the men under the tree were Mosby Rangers, who recently had attacked and captured a Union supply train heading out of Vienna toward Fairfax Courthouse, Lewis said. The men were wearing stolen blue Union frocks to stay warm, he said.

Haight urged his friends to continue their trip, but knew he was in for trouble with Mosby’s men. He squeezed the sides of his horse, which took off at a gallop past the tree. A ranger took aim at him with his carbine, but the round misfired owing to the damp conditions.

Haight caught a grape vine while eluding the shot, and was thrown from his horse. He hid in the woods, then traveled down Chain Bridge road to enlist with Union forces, Lewis said.

Haight and his black horse survived the war, and the latter subsequently won prizes at numerous fairs, Lewis added.

Aidan Turner 'never' wanted to be an actor