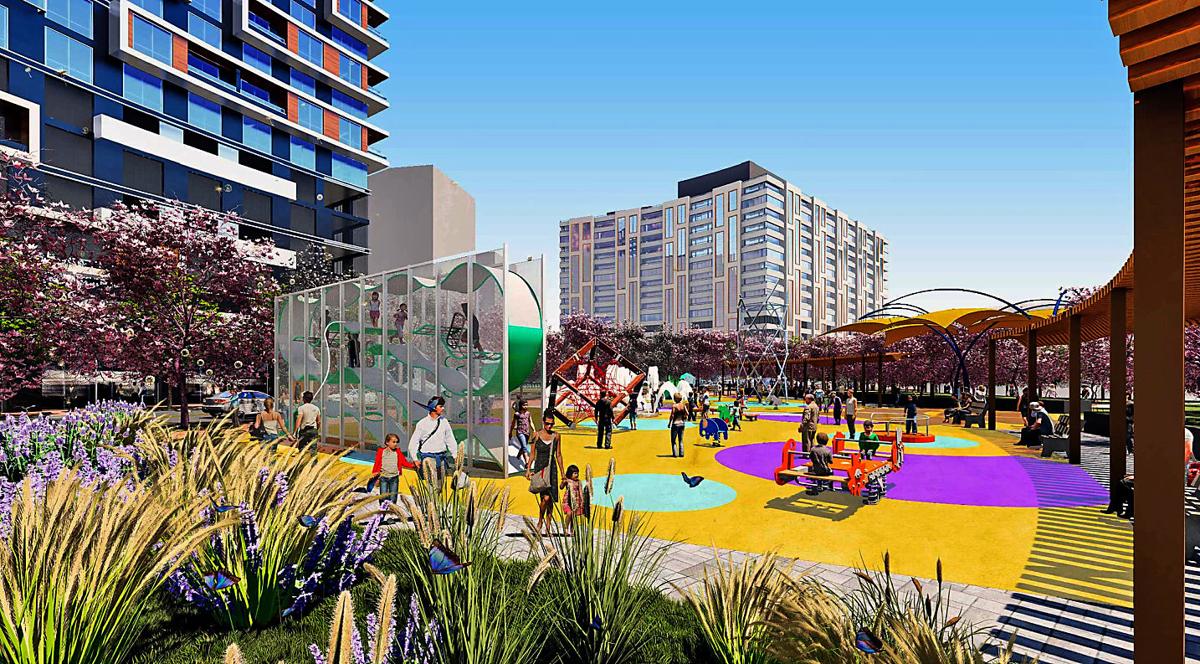 This rendering shows a park element of a mixed-use development in Tysons West that's been proposed by Georgelas LLC. 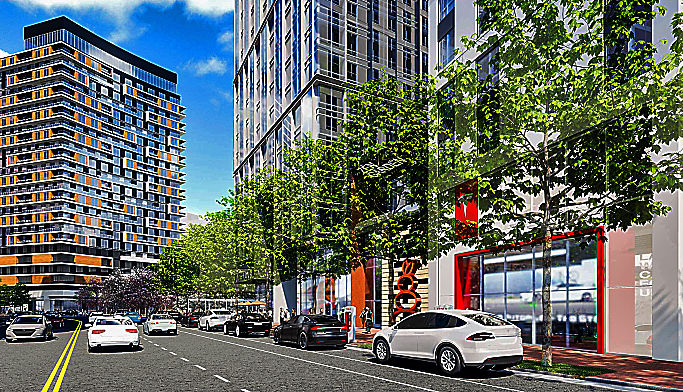 This artist's rendering depicts a mixed-use development in Tysons West that's been proposed by Georgelas LLC.

This rendering shows a park element of a mixed-use development in Tysons West that's been proposed by Georgelas LLC.

This artist's rendering depicts a mixed-use development in Tysons West that's been proposed by Georgelas LLC.

It took eight more months from the initial public hearing last year, but the Fairfax County Planning Commission on May 6 unanimously recommended the Board of Supervisors approve for a pair of mixed-use rezoning proposals in Tysons West.

Georgelas LLC was the applicant for both sites, which have different owners. North Spring Hill Station, a 7.08-acre site owned by Tysons West Assemblage LLC and MCIMetro Access Transmission, is located north of Tyco Road, south of the Dulles Access Road and about 0.15 miles from Route 7.

The application, which because located within a quarter-mile of the Spring Hill Metro station could have a floor-area ratio (FAR) of 3.98, would include five buildings and two new blocks. Four of the buildings would be new; the developer would retain an existing telecommunications facility.

The new structures would include two residential towers, an office tower and a parking garage, which would be used for vehicle storage and be topped by an athletic field.

The second application, West Spring Hill Station, is owned by Templeton Foundation LLC and covers 7.3 acres at the northeast quadrant of Route 7 and Tyco Road.

This application would have four new buildings (two residential, one office and the last with an option for either) and three new at-grade public parks.

The developer would like to build a public park on 0.73 acres north of Tyco Road and about 0.12 miles from Route 7.

The matter since has undergone several deferrals, and the developer in January submitted a revised application that addressed the outstanding issues, county staff said.

The applicant reduced the amount of residential space, bringing the mix of residential and office space more in line with expectations for that part of Tysons, where more office space is expected, said Tracy Strunk of the county government’s Department of Planning and Development.

“The office component is much more likely, because it is no longer tied to a future connection to the toll road,” she said. “It could go forward.”

The applicant has committed to 776,000 square feet of office and has an option for another 235,000 square feet, said Elizabeth Baker, the developer’s attorney.

“We want to be realistic as to what can be built on this site,” Baker said.

“But the quality and the commitment the applicant has made to the features that will be put in each of these park spaces is sufficient to overcome that,” Strunk said.

Planning Commission member Phillip Niedzielski-Eichner (Providence District) said he “fully supports” the applications because they, along with several other approved ones in Tysons West, further transit-oriented, mixed-use, urban development near the Spring Hill Metro Station.

“These developments will collectively also further establish the Tysons West district as an exciting and vibrant place to live, work and to play,” he said.