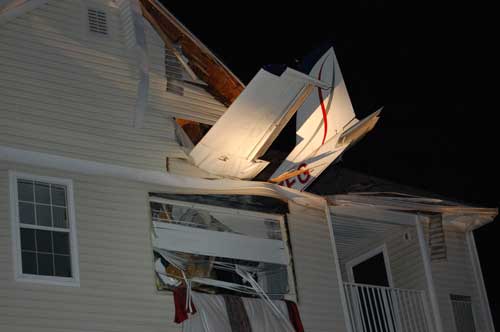 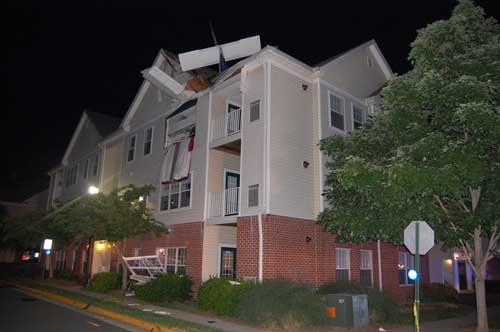 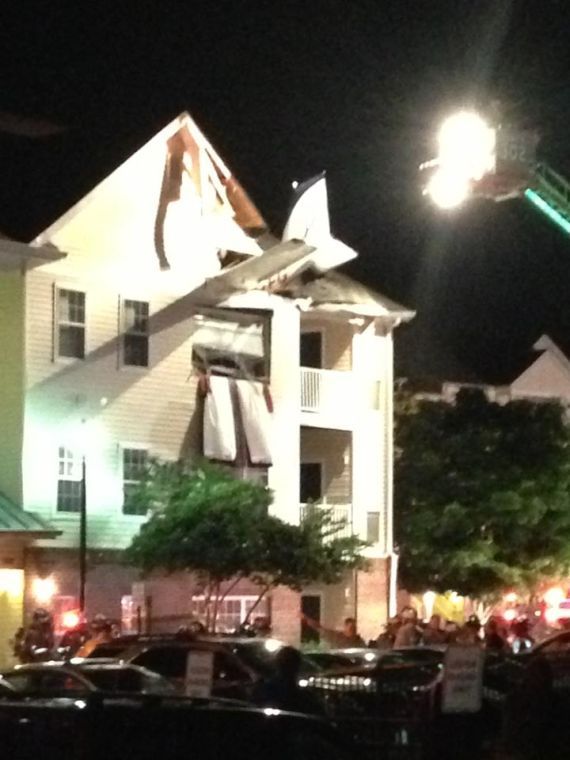 It happened about 12:25 a.m. at 2232 Astoria Circle near Innovation Avenue in the Dulles Green apartment complex, according to a post on the Fairfax County Fire Department's Twitter account.

A 33-year-old woman from the apartment was taken to Inova Fairfax Hospital with non-life threatening injuries, Geller said.

The pilot, William Larson, 61, from Vienna, had serious but non-life threatening injuries and was taken to Inova Fairfax Hospital. The passenger, Tache Alejandro, from Orlando, Fla., was treated on the scene for minor injuries, according to Geller.

"Larson and Alejandro work for an aerial photography company and had been in the air taking infra-red photographs, when the plane experienced electrical problems and the engine cut off," Geller said. "Because the plane was also running low on fuel, Larson had contacted Dulles Airport to re-route its destination. Originally the plane was to land at the Manassas Regional Airport."

Manassas Regional Airport is about 30 miles from Astoria Circle.

Larson and Alejandro had taken off from Northeast Philadelphia Airport.

The National Transportation Safety Board and Federal Aviation Administration are investigating at the scene.

So, I'm not sure what map you're using, but that building is not even 5 miles from the main terminal at Dulles if you use surface roads. Which makes the executive landing strips even closer by air.

I live in the building next door to this. Dulles is 2 miles away, bird's eye view. Not 22.

How in the name of names and the scale of scales could you claim that Dulles is 22 miles away. Just another case of the media pushing their agenda on the public with lies and falsehoods. The newspapers have always wanted us to think Dulles is further away so more people would use Regan... which used to be National... until the media started calling it Regan as if it didn't even have a name already... which it did. Thank goodness for the patriots who stand up and point out such atrocities as this. 22 miles indeed... oh the humanity.

Where does it say that Dulles is 22 miles away?

I <3 your response. But you spelled Reagan wrong.

Are we having reading comprehension problems, kids?

The article states (emphasis mine): "MANASSAS REGIONAL AIRPORT is about 30 miles from Astoria Circle", which is where the plane crashed.

Thankfully nobody was fatally injured especially the children who were sleeping during the time of the accident. Hopefully the owners has the rightful insurance coverage so they can start personalising their new apartment after the damages have been carefully taken care of once they have recuperated properly.

Nicole Kidman contemplated retirement when she got pregnant