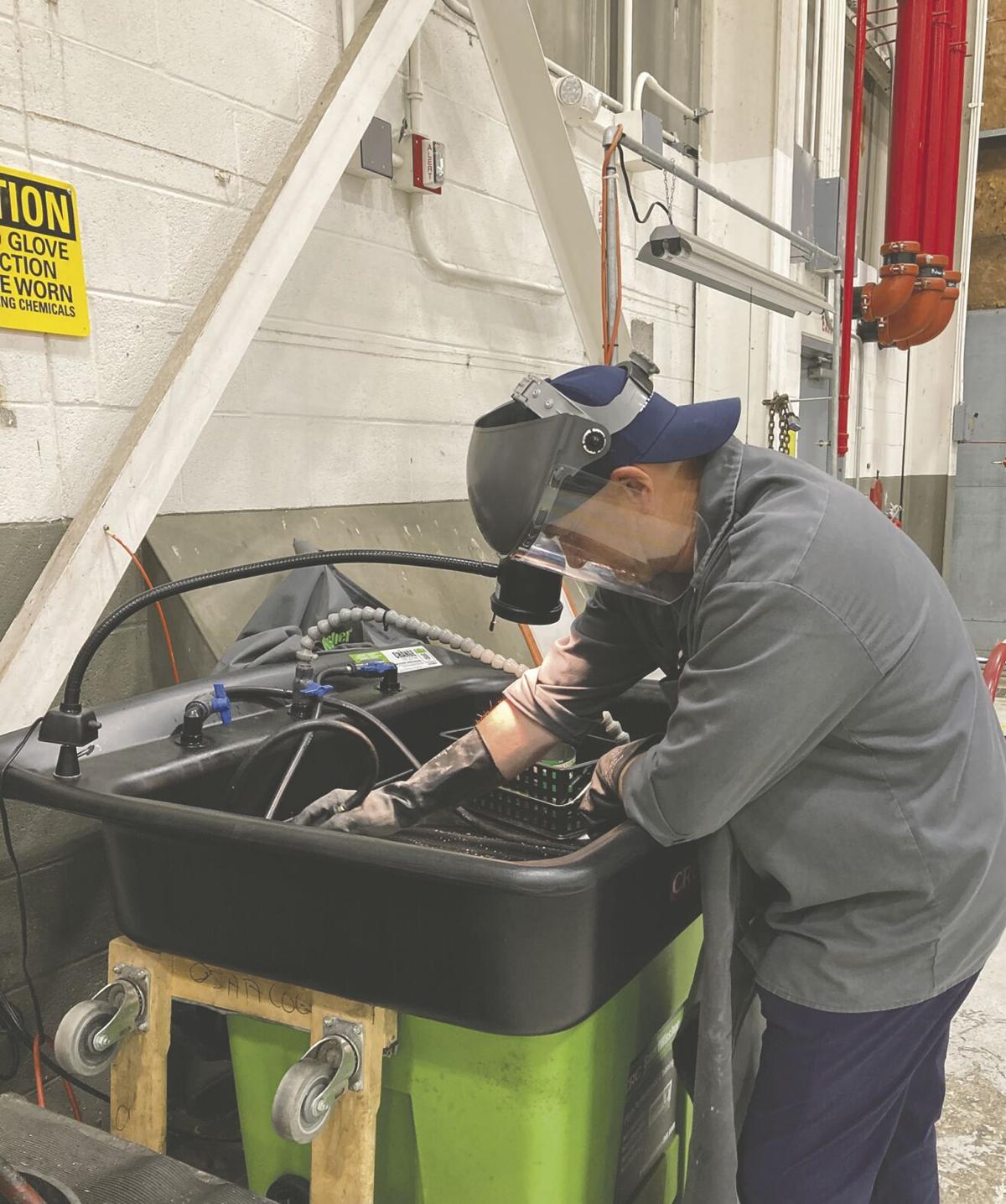 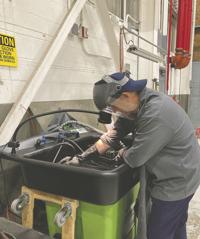 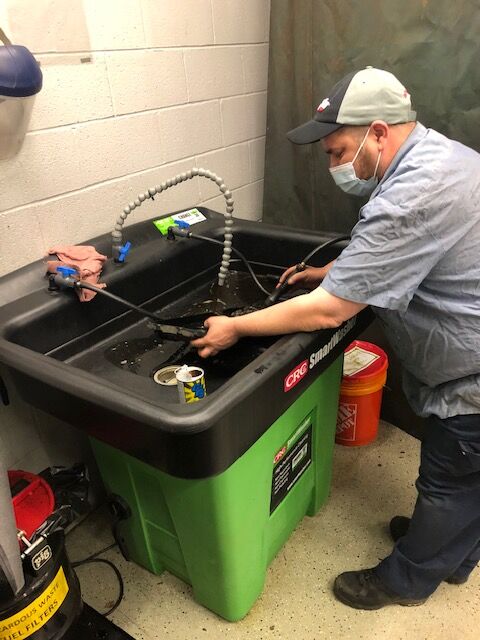 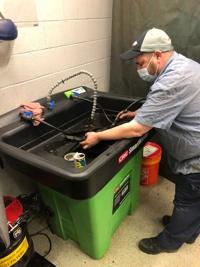 Tom Young, an automotive training instructor at the Fort Belvoir Auto Skills Center, cleans a vehicle part in a smart washer. The solvent-free parts washer is safer to use and doesn't pollute the air.

Tom Young, an automotive training instructor at the Fort Belvoir Auto Skills Center, cleans a vehicle part in a smart washer. The solvent-free parts washer is safer to use and doesn't pollute the air.

Fort Belvoir is a major city in Northern Virginia, with nearly 43,000 workers on the installation. Those units have a wide variety of equipment, and keeping the equipment rust-free and in top condition required industrial parts washers to remove rust and built-up grime from brakes, bearings, weapons, motors, engines and aircraft parts.

The kind of solution used in parts washers has been a toxic problem for years, as each washer has a tank of hazardous solvents, including WD-40, rust removers, acetone, ethyl or acetic acid.

All of those solvents contribute to ozone depletion, and must therefore be carefully managed, said Carol Creasap, air program manager at Fort Belvoir’s Department of Public Works. The department is required to track, monitor and properly dispose of these hazardous materials.

Anthony Gartrell, who manages the contract for the parts washers, was intrigued by a pilot program at Fort Carson, Colo., in which the units were swapped out for so-called smart washers, which use OzzyJuice, a mixture of water-based cleansers containing no solvents. The liquid is biodegradable, non-toxic, non-caustic, non-flammable and non-hazardous.

“It’s recyclable, and it doesn’t emit any air contaminants, and it works as thoroughly as the solvent-based chemicals do,” Gartrell said. “It’s just safer for employees and more environmentally friendly all the way around.”

Gartrell said many of the Belvoir units, when presented with the proposal, were reluctant.

“The hardest thing was just getting buy-in,” Gartrell said. “When they see ‘bio-friendly’, they worry it is able to do the job. People were especially suspect of the bio-fluid having no smell, as opposed to the strong odors of the ethyl solutions.”

Gartrell said not only were the old systems heavy polluters, but the department was spending $60,000 a year to lease the washers. A solvent-based washer was costing $1,600 a year, and the bio-based washers are $300 a year, which includes both the solvent and solution.

“Science-wise, it’s not good to be breathing these volatile chemicals, and we are also proving to them that this new method meets all their requirements,” Gartrell added. “I haven’t received any negative feedback once they tried it.” He said the Air Force has already introduced smart washers on bases nationwide.

Creasap said the environmental impact is also quite noticeable. “We are making an impact on our installation, which helps contribute to Northern Virginia’s overall emissions reduction. If we all do our own parts, cumulatively, we’ll get there,”

Gartrell has now become used to the cycle of resistance, doubt and then acceptance as each unit learns the benefits and signs on.  “It’s an ongoing battle, but it’s fun enlightening people,” he said.

How about the U.S. Army going to electric vehicles, charged by solar, whenever possible? No more gasoline / diesel fuel, motor oil, transmission fluid, antifreeze, brake fluid, for starters? Same for the rest of us now driving internal combustion motor vehicles.