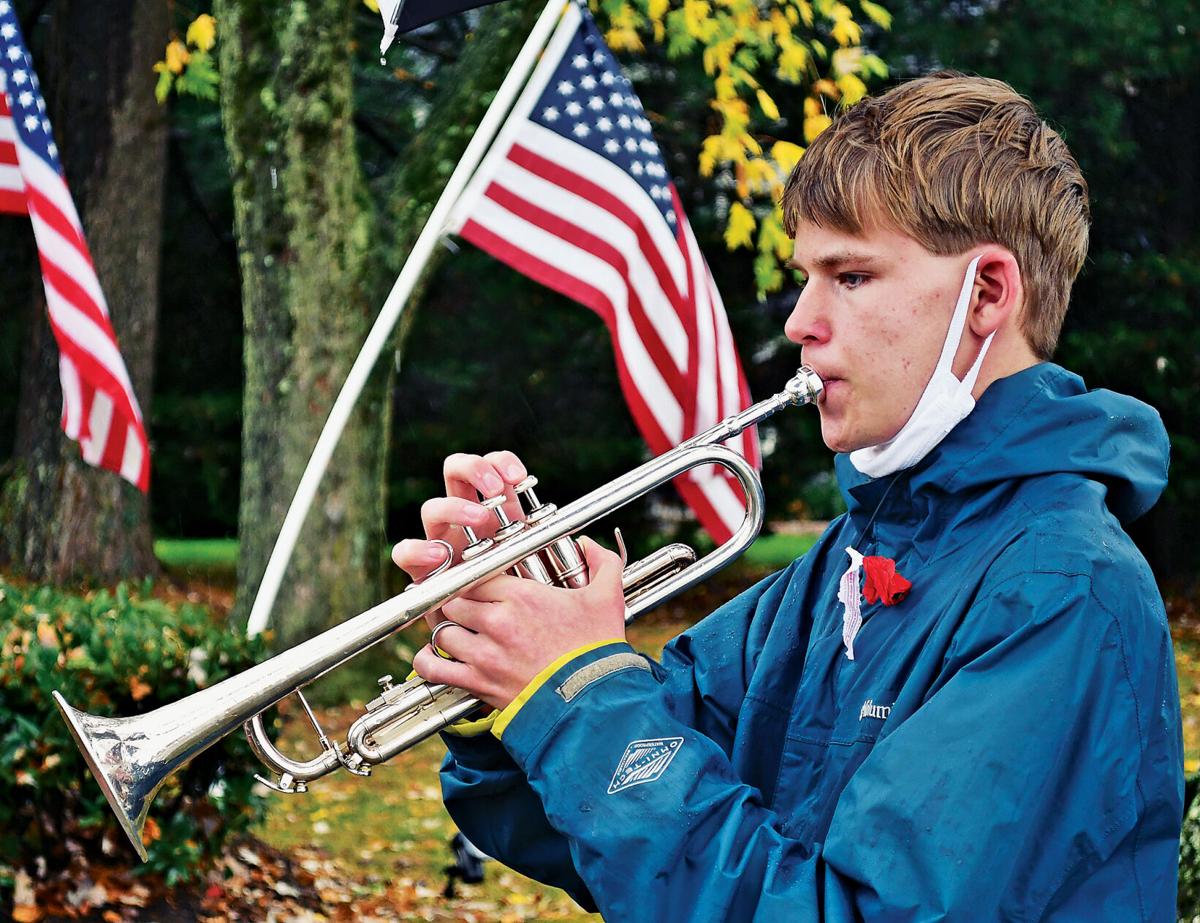 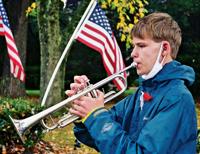 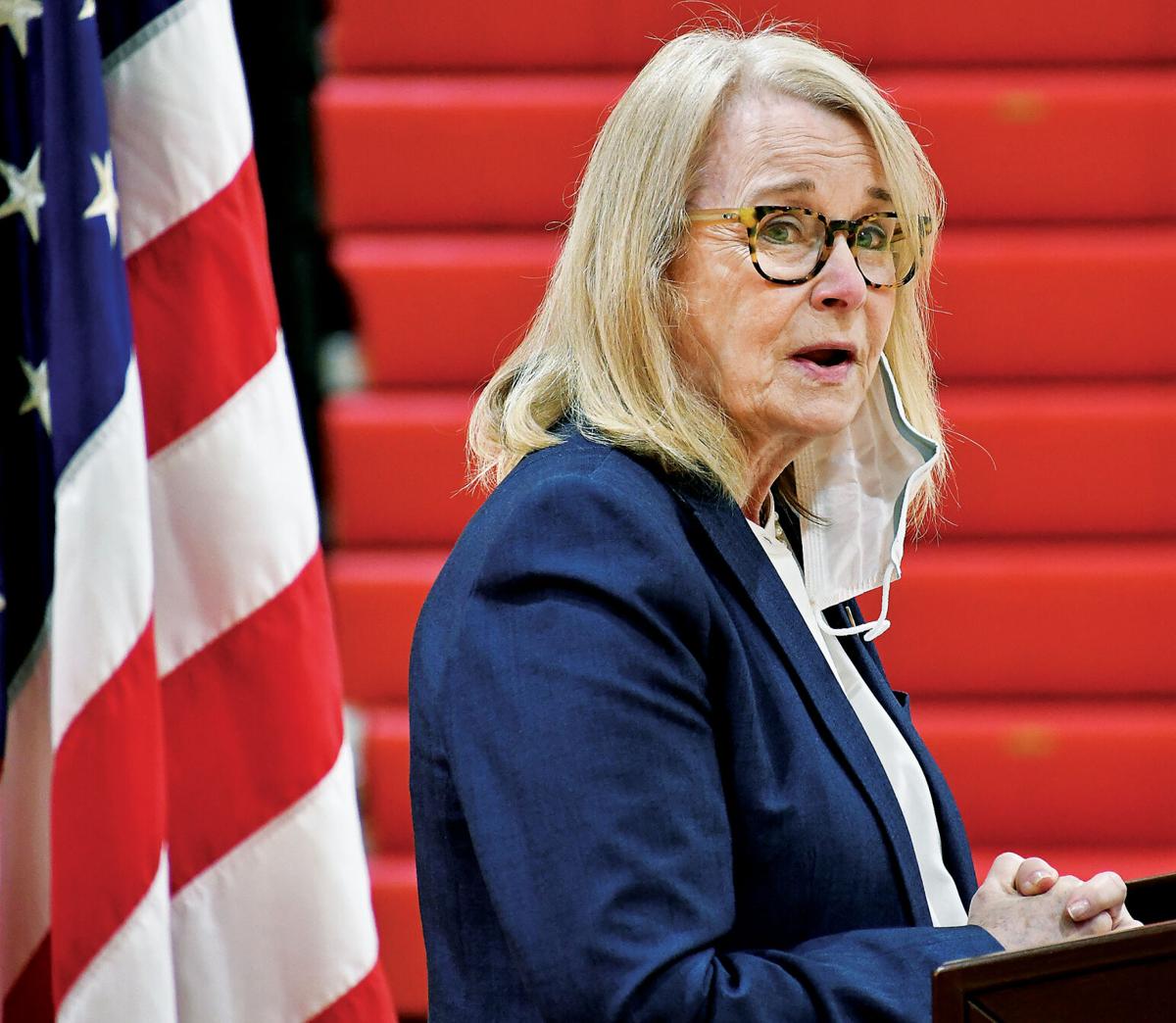 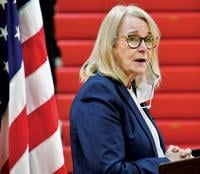 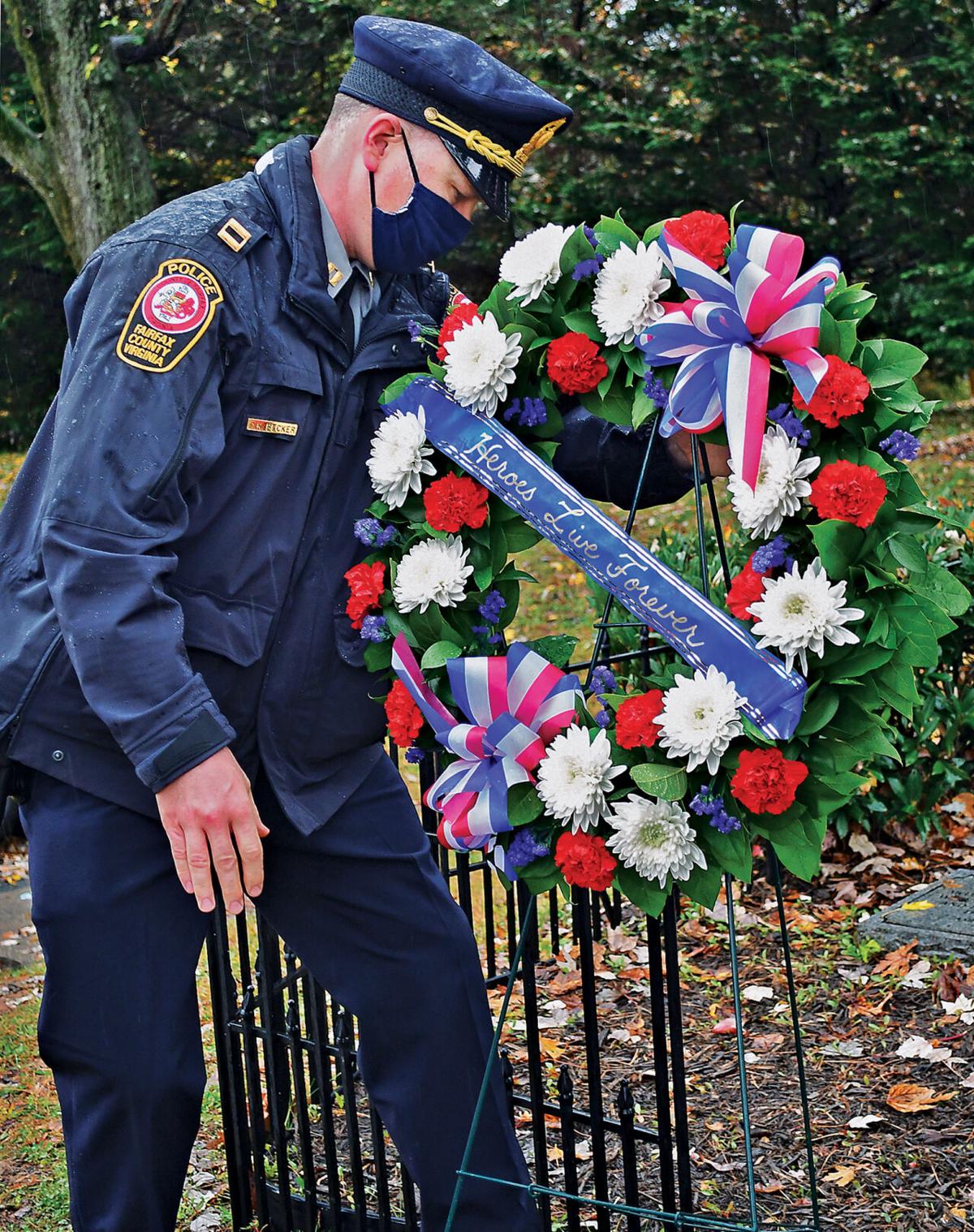 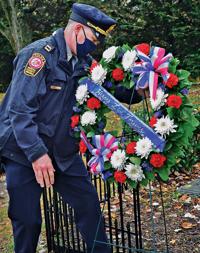 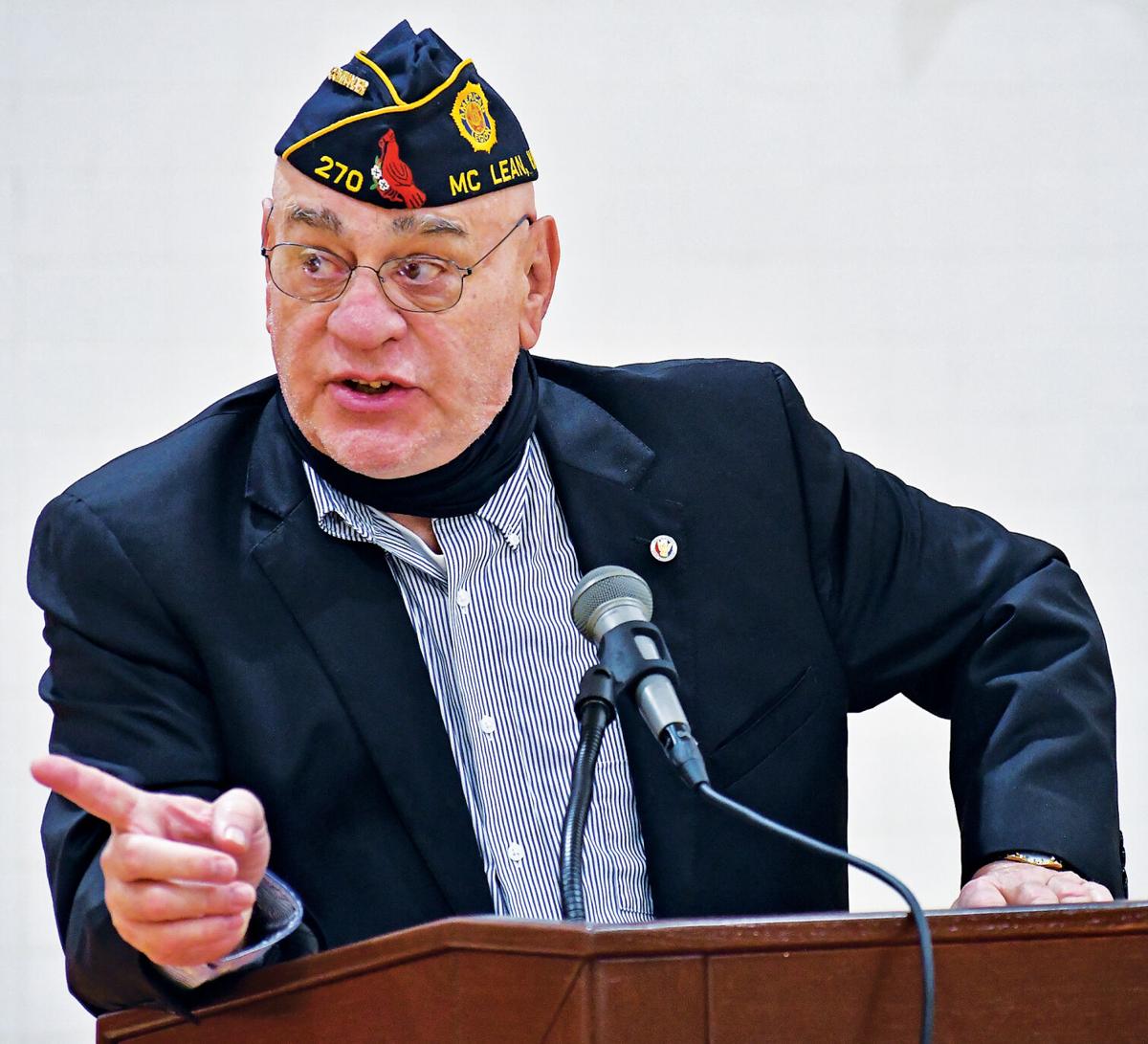 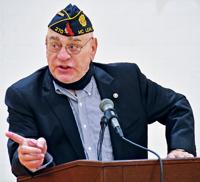 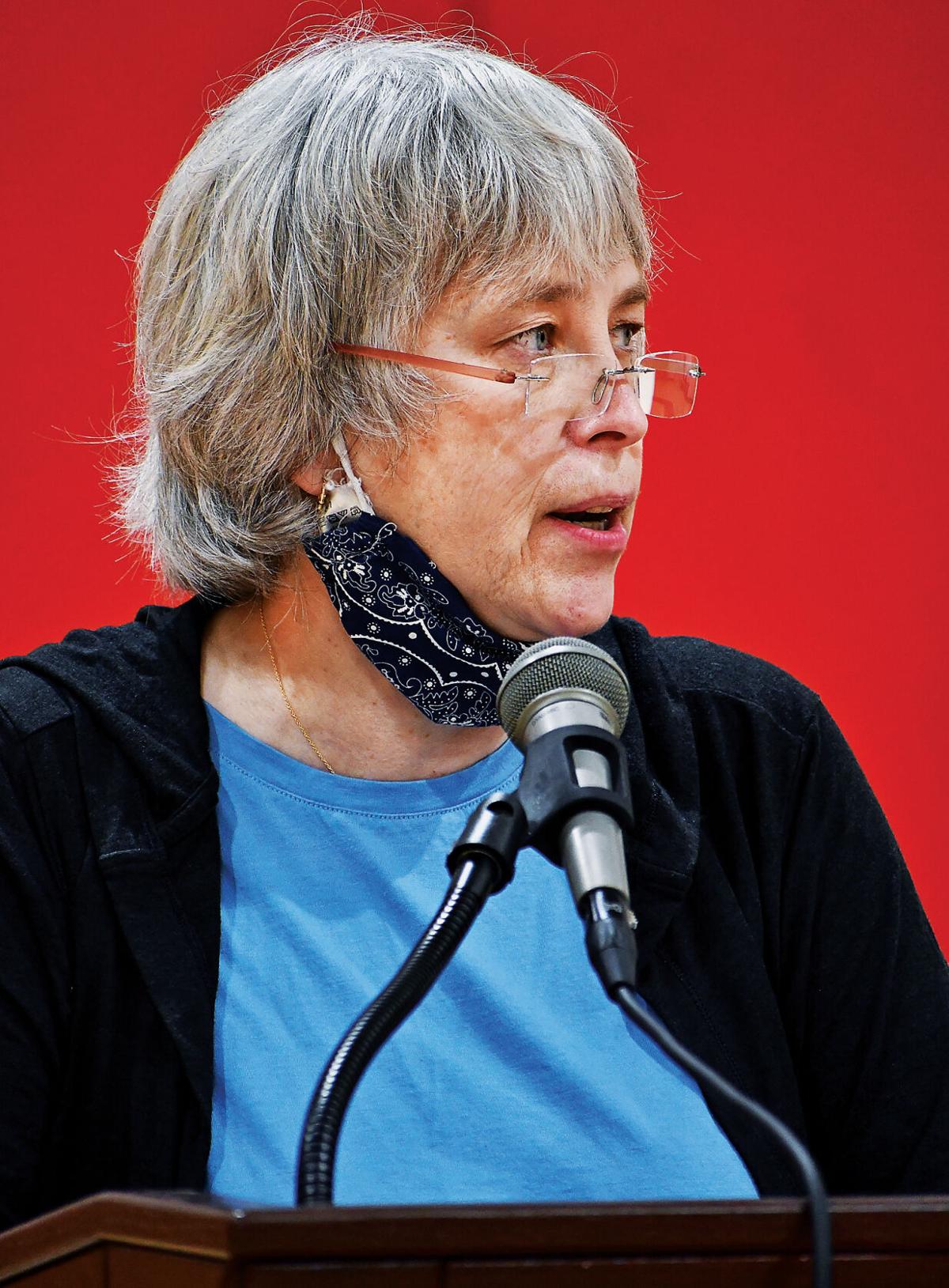 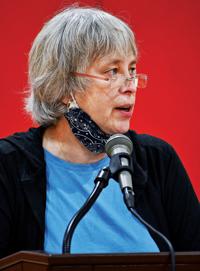 Courtney Nuzzo, president of the Rotary Club of McLean, thanks military veterans for defending the nation's freedom during a Veterans Day event Nov. 11, 2020, at McLean High School. (Photo by Brian Trompeter) 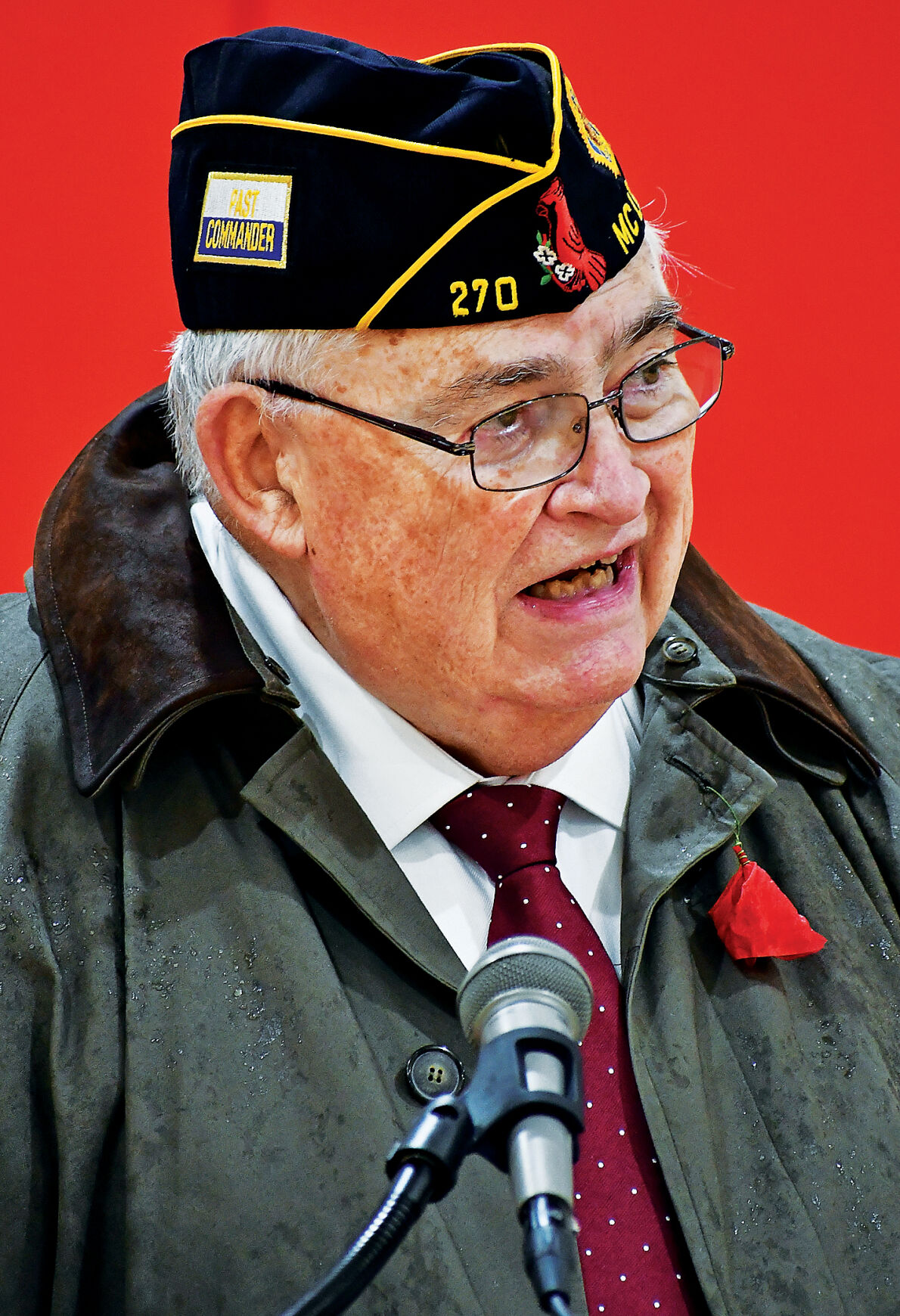 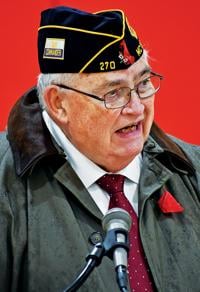 Courtney Nuzzo, president of the Rotary Club of McLean, thanks military veterans for defending the nation's freedom during a Veterans Day event Nov. 11, 2020, at McLean High School. (Photo by Brian Trompeter)

Veterans Day each November gives Americans the chance to those who have safeguarded the country in the military, said Del. Kathleen Murphy (D-McLean-Great Falls) on Nov. 11 at the Flags for Heroes Veterans Day Program.

“We know, though, that you in the military have served and carried more of the weight than the weight of a rucksack on your back,” she said. “In fact, you carry the weight of protecting our freedom – freedoms for all of us.”

The annual event, sponsored by American Legion Post 270 and the Rotary Clubs of McLean and Tysons Corner, began outside in the rain at McLean High School and ended in one of the school’s gymnasiums.

As the rain began to fall more steadily, post leaders moved the event indoors. Attendees went to a gymnasium way down the hallway at McLean High School and either stood or sat in chairs set far apart.

“It is entirely appropriate to recognize these people who protected our democracy and allowed us to live our lives as free people,” agreed Rotary Club of McLean president Courtney Nuzzo.

Rotary Club of Tysons Corner president Ambreen Rizvi said the “Flags for Heroes” initiative, which allows people to sponsor U.S. flags that the group place around the community, is designed to be patriotic and encourage unity.

“No matter what race, religion, gender or political beliefs you are, you still stand by the flag,” she said.

Keynote speaker Murphy noted she comes from a military family – her father served in two wars as a member of the “Greatest Generation” and her brother was a medic in Vietnam – and said a sense of duty always has been a part of her life.

“I grew up in a tight-knit community of duty-bound military families serving at home and abroad,” she said. “These were people who understood the importance of serving our country and who were willing to make sacrifices that always come with wearing the uniform of this great nation.”

Murphy, who serves on the Virginia Board of Veterans Services, said women now are serving as leaders in the Marines, Army, Air Force and Navy.

“I know that today’s military looks a lot different from the days of my dad,” Murphy said. “It’s diverse. Women are serving side-by-side with men. Our female service members have slowly, but steadily, integrated into combat positions.”

Virginia has the third highest number of veterans in the country and the public is heartbroken about the rise in suicides, homelessness and unemployment facing them, she said.

After discovering that female veterans experienced these issues more often than their male counterparts, Murphy said she put in a bill to fund a new position of women veteran coordinator within the Department of Veterans Affairs.

W. Glenn Yarborough, a past commander of American Legion District 17, gave the traditional reading of “In Flanders Fields,” a World War I poem by a Canadian physician, Lt. Col. John McCrae. Yarborough noted that late Del. Vincent Callahan formerly recited the poem at the annual event, but did it from memory.

Chloe Sevigny: I loved and hated being a teenager