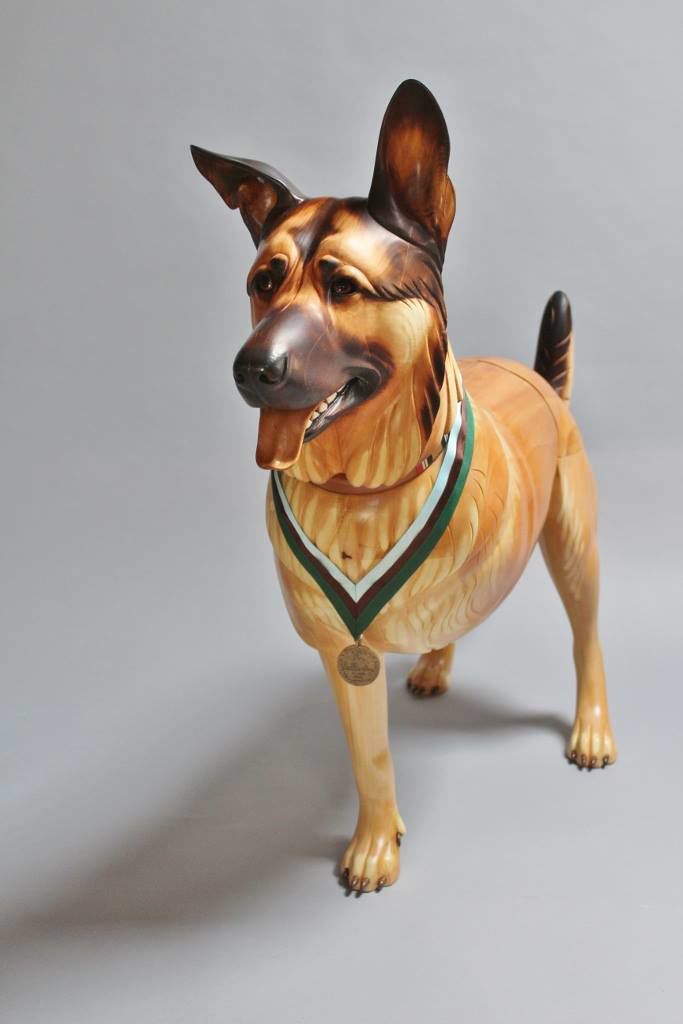 Sculpture of a wounded warrior military dog, part of a war dogs exhibit coming to the National Museum of the Marine Corps. 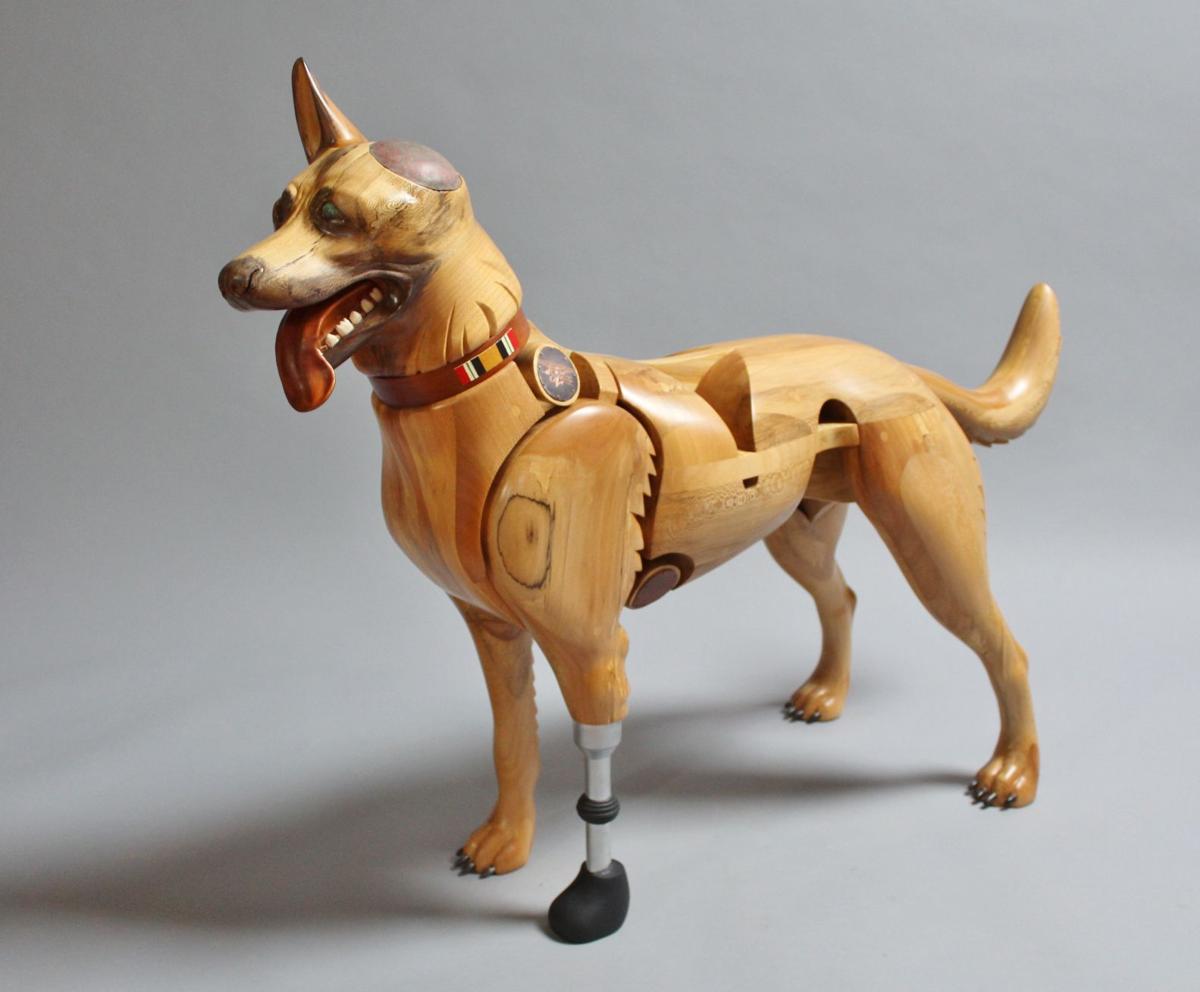 A sculpture of a wounded warrior military dog from the war dogs exhibit coming to the National Museum of the Marine Corps. 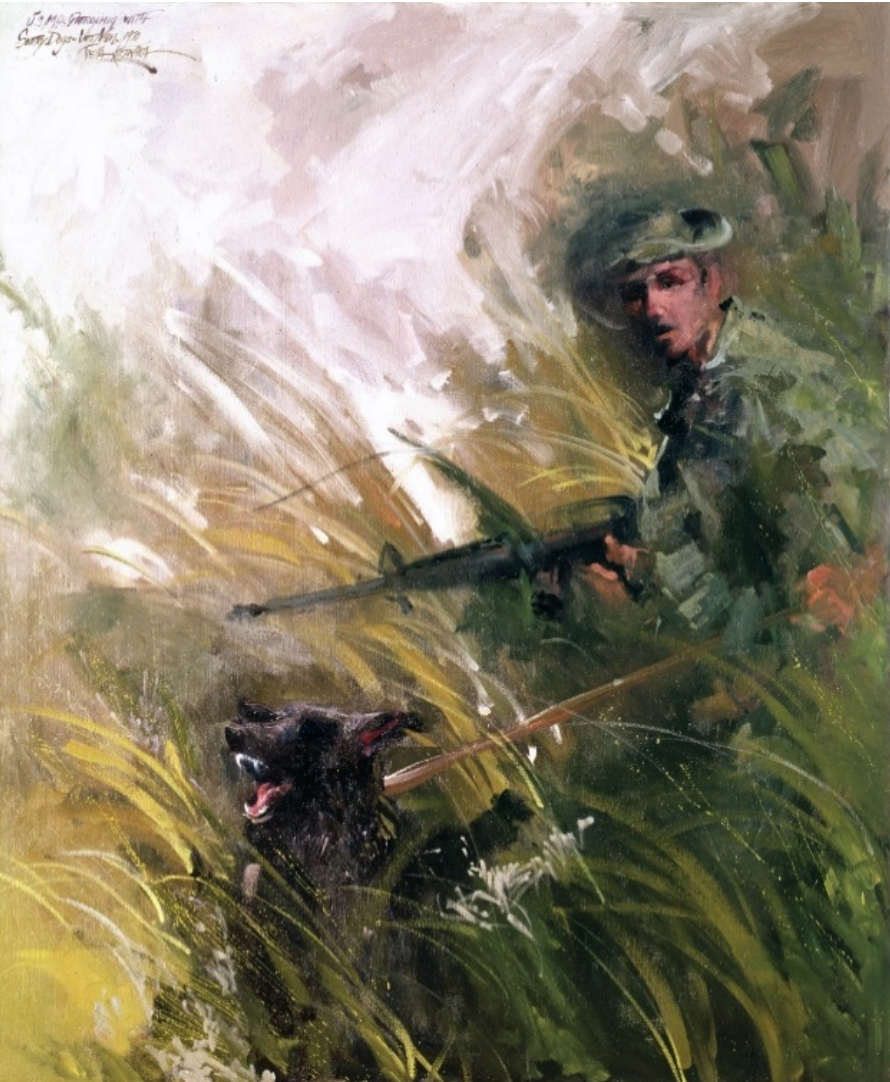 "A Marine and His Dog" by Trella Koczwara. Image courtesy USMC

Sculpture of a wounded warrior military dog, part of a war dogs exhibit coming to the National Museum of the Marine Corps.

A sculpture of a wounded warrior military dog from the war dogs exhibit coming to the National Museum of the Marine Corps.

"A Marine and His Dog" by Trella Koczwara. Image courtesy USMC

Officially, dogs have served with Marines in battle since World War II. A new temporary exhibit, "War Dogs: Never Above You, Never Below You, Always Beside You" at the National Museum of the Marine Corps spotlights and honors the important role these four-legged warriors serve.

Opening May 18, the exhibit combines sculptures by artist James Mellick with combat art from the collections of the National Museum of the Marine Corps, the United States Coast Guard and the United States Navy, along with artifacts related to Marine Corps working dogs. Mellick’s creations, carved from wood, are symbolic of the sacrifices made by canine and human warriors alike.

“I am moved by the physical and emotional sacrifice by the men and women of the United States military,” said Mellick. “Contemporary medical technology and triage in the field has more veterans surviving with injuries that would have been fatal in previous wars. In my limited and small way, I want to pay tribute to the soldiers who served with great sacrifice by creating the sculptural allegory of wounded warrior dogs who were the soldier’s best friend and companion in battle.”

The 28 pieces of combat art depict dogs at work around the globe from WWII in the Pacific all the way to the wars in Iraq and Afghanistan. Artifacts that tell specific stories of Marine Corps dogs and handlers round out this tribute to the loyalty, bravery and sacrifices of the warfighter’s “best friend.”

“The art consists of finished works, but also of importance is the quick sketches that capture the moments of Marine and their K-9 companions at work that further enhance the story of the role of these teams during a time of conflict,” Joan Thomas, NMMC Art Curator said. “Our goal was to show the dogs and their handlers engaged in their work, while Mr. Mellicks amazing wood-carved wounded dogs portray the wounds suffered by our armed forces, which include our working dogs.”

One of Mellick’s sculptures in the show represents Lucca, a Marine Corps war dog. She conducted more than 400 missions during two deployments to Iraq and one to Afghanistan. One of those missions cost Lucca her leg and severe burns but there were never human casualties under her watch. Marine Corps dog handler Chris Willingham worked with Lucca and then adopted her upon her retirement. He knows firsthand the bond between the human and canine warrior.

“Dogs have faithfully served our country since World War II and are directly responsible for saving countless lives. The War Dogs exhibition is bigger than the dog teams who are represented and will help educate the public and bring awareness to the service and sacrifice of our military working dogs and their handler,” Willingham says of the show.

There are also items used by war dogs and their handlers since WWII on display in the show. From dog uniforms to canine medical kits and Purple Hearts, these items help tell the story of our Nation’s four-legged heroes.

While the artifacts tell part of the story, the artwork paints a more complete picture. The 28 pieces depict the most menacing war dog to goggled high-flying dogs to sleeping warriors and keen detectives.

The May 18 official opening for “War Dogs: Never Above You, Never Below You, Always Beside You” offers visitors a chance to meet active working dogs and their handlers, as well as Jim Mellick and other artists whose work is featured in the show.

'War Dogs' will be on display in the Museum’s Combat Art Gallery through September.

For more information, visit www.usmcmuseum.com. Admission to the National Museum of the Marine Corps in Triangle is always free.

Tiffany Haddish: The 'word of God' is the 'best gift'