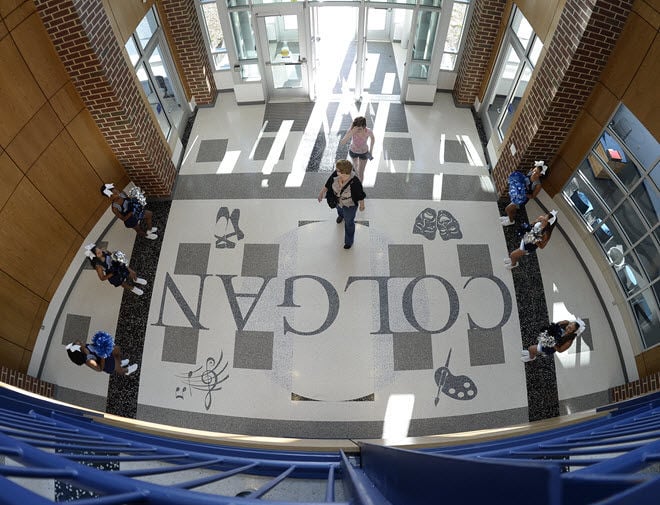 Colgan cheerleaders lined the school's two-story atrium to greet those arriving for the ribbon-cutting ceremony. 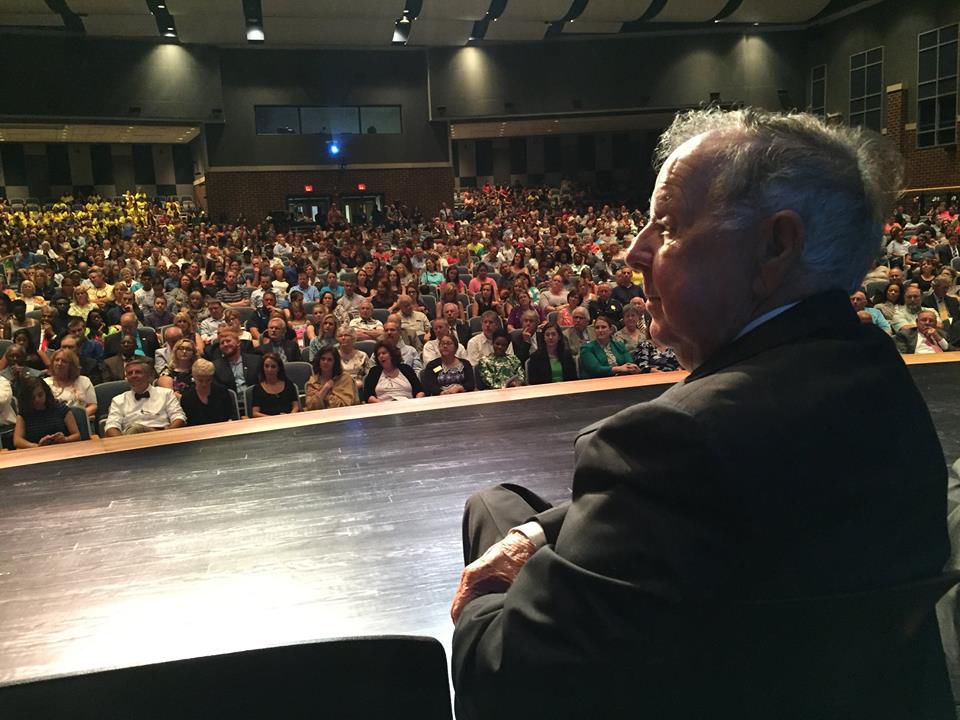 Former state Sen. Charles J. Colgan, Sr., looks out at the crowd of about 1,000 who attended Monday's ribbon-cutting ceremony at the new high school that bears his name. 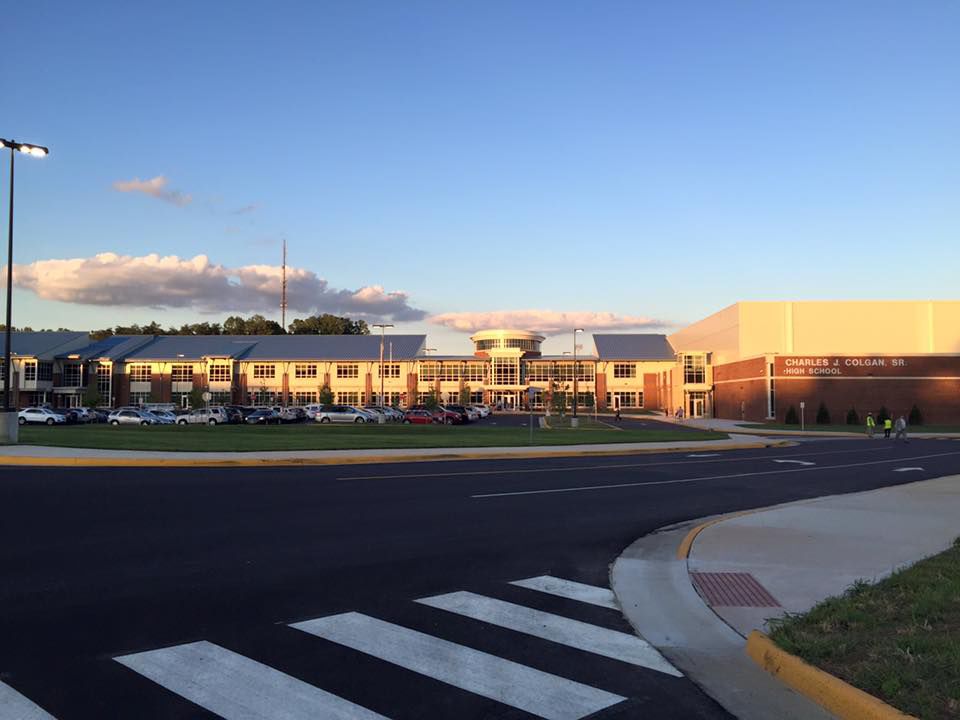 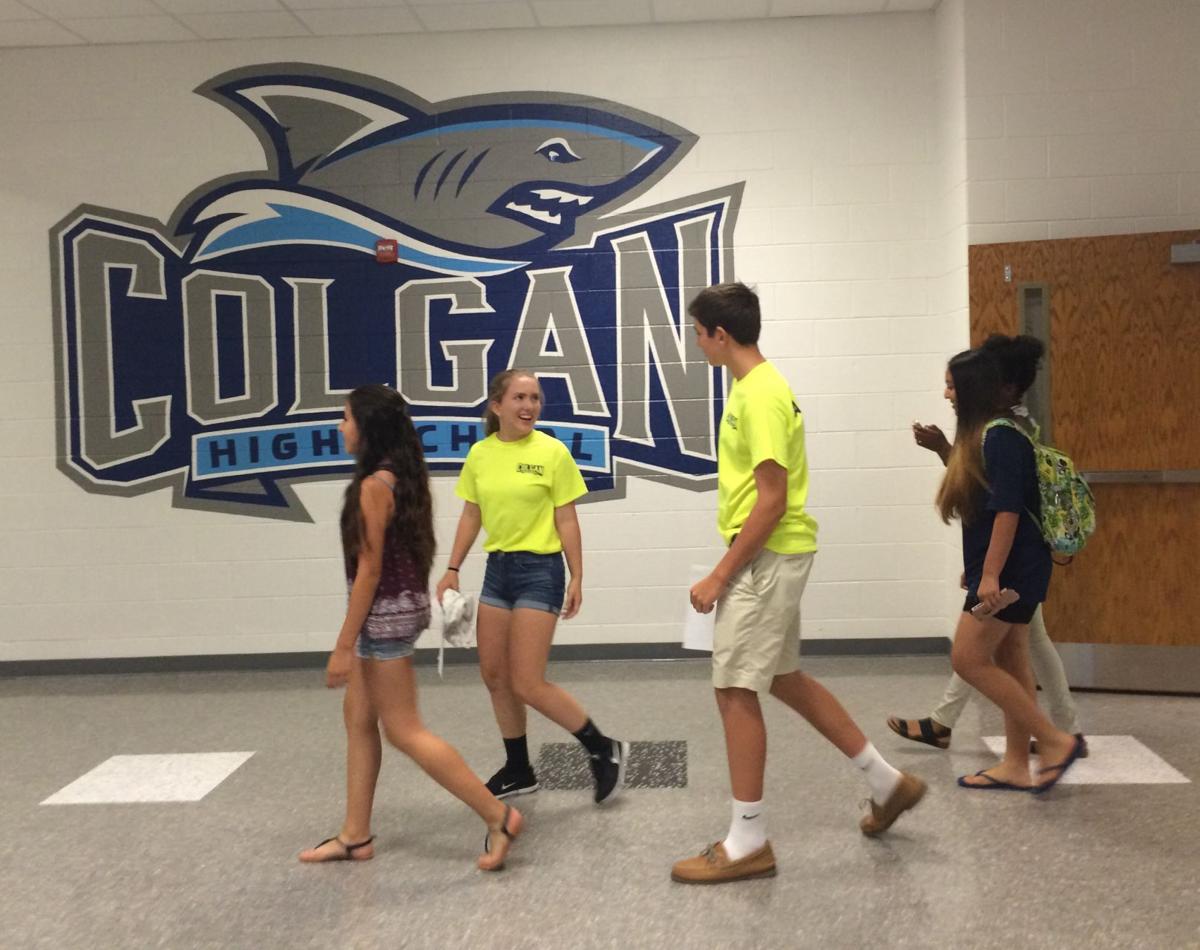 Students pass a Colgan "Sharks" mural located near the gymnasium and aquatic center.

Colgan cheerleaders lined the school's two-story atrium to greet those arriving for the ribbon-cutting ceremony.

Former state Sen. Charles J. Colgan, Sr., looks out at the crowd of about 1,000 who attended Monday's ribbon-cutting ceremony at the new high school that bears his name.

Students pass a Colgan "Sharks" mural located near the gymnasium and aquatic center.

Colgan wielded the oversized scissors to ceremoniously open the new high school but declined to take the podium, opting instead to listen as a stream of local dignitaries praised his accomplishments as Virginia’s longest-serving state senator.

Calling him a “legend,” a “great champion of education,” a “humble and effective legislator” and “the greatest statesman this locality has ever produced,” speakers credited Colgan for his visionary contributions to the county’s education and transportation infrastructure.

Among fixtures attributed to Colgan’s direct effort to secure funding for his 29th state Senate District, which he represented from 1976 to 2016, speakers listed improvements to Interstate 66, the building of Northern Virginia Community College’s Woodbridge and Manassas campuses, the creation of George Mason University’s Manassas campus and the Va. 234 Bypass, the road on which the school is built.

Colgan’s principal, Tim Healey, who formerly served as the school division’s associate superintendent for student learning and accountability, called Colgan “a legend in Prince William County,” adding, “It will be an honor to carry out your legacy at our high school.”

Built on about 109 acres, the school accommodates 2,200 students but will open Monday to 1,475 freshmen, sophomores and juniors. Full enrollment will come next year, when Colgan houses all four grade levels, including the Class of 2018.

School Board Chairman Ryan Sawyers noted that Colgan, who was orphaned at age 5, overcame childhood adversity to achieve his success.

Colgan served as a pilot in the U.S. Army Air Corps, in which he enlisted as a high school senior near the end of World War II, and then went on to  launch his own airline, Colgan Airways, from the Manassas Regional Airport. He served on the Prince William Board of Supervisors before being elected to the state Senate.

“It is not lost of me that you kind of had the trifecta of good things going on,” said Sawyers. “You created jobs in this county. You fought for this county, and we’re building this high school on a road that you literally paved for the betterment of this county.”

Prince William County Superintendent Steven Walts also praised Colgan for his efforts to sustain state funding for public schools during the Great Recession, as well as his quiet assistance with more personal concerns, such as the time Walts called on Colgan to help arrange a medical-transport flight for a local teacher who had become critically ill while traveling out of state.

About 60 of Colgan’s relatives, many of whom still live in area, attended the event. Colgan and his late wife, Agnes, have 24 grandchildren, 22 great-grandchildren, “and two on the way,” said Dot Chaplin, one of the senator’s eight children.

Although the school only recently opened to teachers and students, the event showcased the trappings already in place ahead of the first day of school, Aug. 29.

Decked out in new uniforms of “Colgan blue, shark grey and Caribbean blue,” the school colors, the marching band kicked off the ceremony with the national anthem and school song, while the Colgan High cheerleaders and dance squad performed with silver-and-blue pompons.

Supervisors Chairman Corey Stewart praised both former and current school board members for demonstrating “a profile in courage” to overcome what he called “a tremendous amount of political pressure” to rein in the costs of what remains one of the most expensive public high schools in Virginia, largely due to the indoor aquatics facility.

As he has in the past, Stewart, R-At Large, explained he was an early supporter of adding the indoor pools, sharing that he nearly drowned as a child before learning to swim at his Minnesota middle school.

Stewart said he hopes the “Prince William Schools Aquatics Center,” as the facility is officially called, can fill a similar role for local students.

“It truly present[s] a public-safety risk that so many of our children [do] not have the opportunity to learn how to swim,” Stewart said.

After the ceremony, Colgan students led groups of parents and students on tours of the new school, pointing out the double-winged cafeteria, the sound-proof music practice rooms, the outdoor courtyard-style gathering space and, of course, the two-pool aquatics center, which this year will provide practice space to nine of the 12 high school swim teams, and water-safety instruction to second-grade students from at least nine elementary schools.

The facility, which has a separate entrance and locker rooms, will also be open for public use seven days a week.

Services have been set for former Virginia State Sen. Charles J. Colgan, who died Jan. 3 at the age of 90.

Cheers for opening such great and big school. The school is looking lush and hope the education will be too. I will also be admitted to kids to this new high school. After reading your essaypro discount article I am feeling very satisfied that my decision is good for my kid’s future.

Louis Tomlinson was 'fuming' over One Direction split