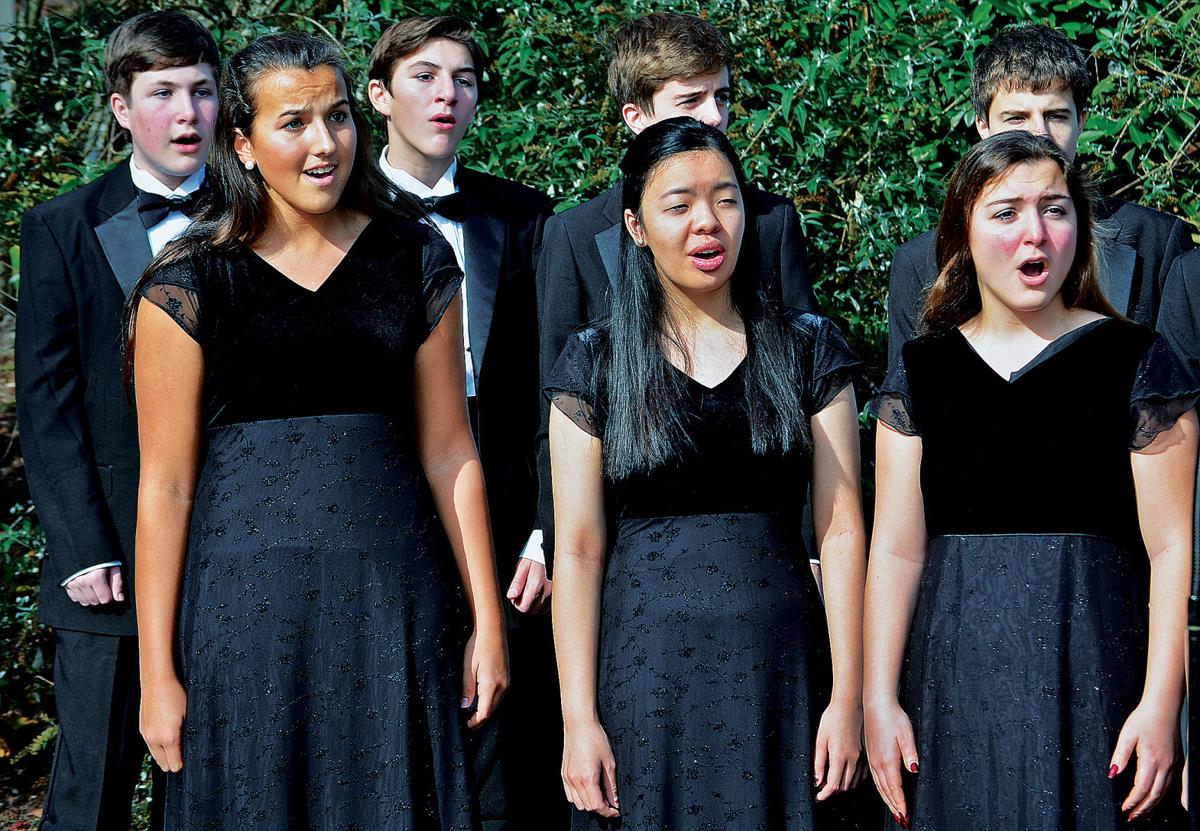 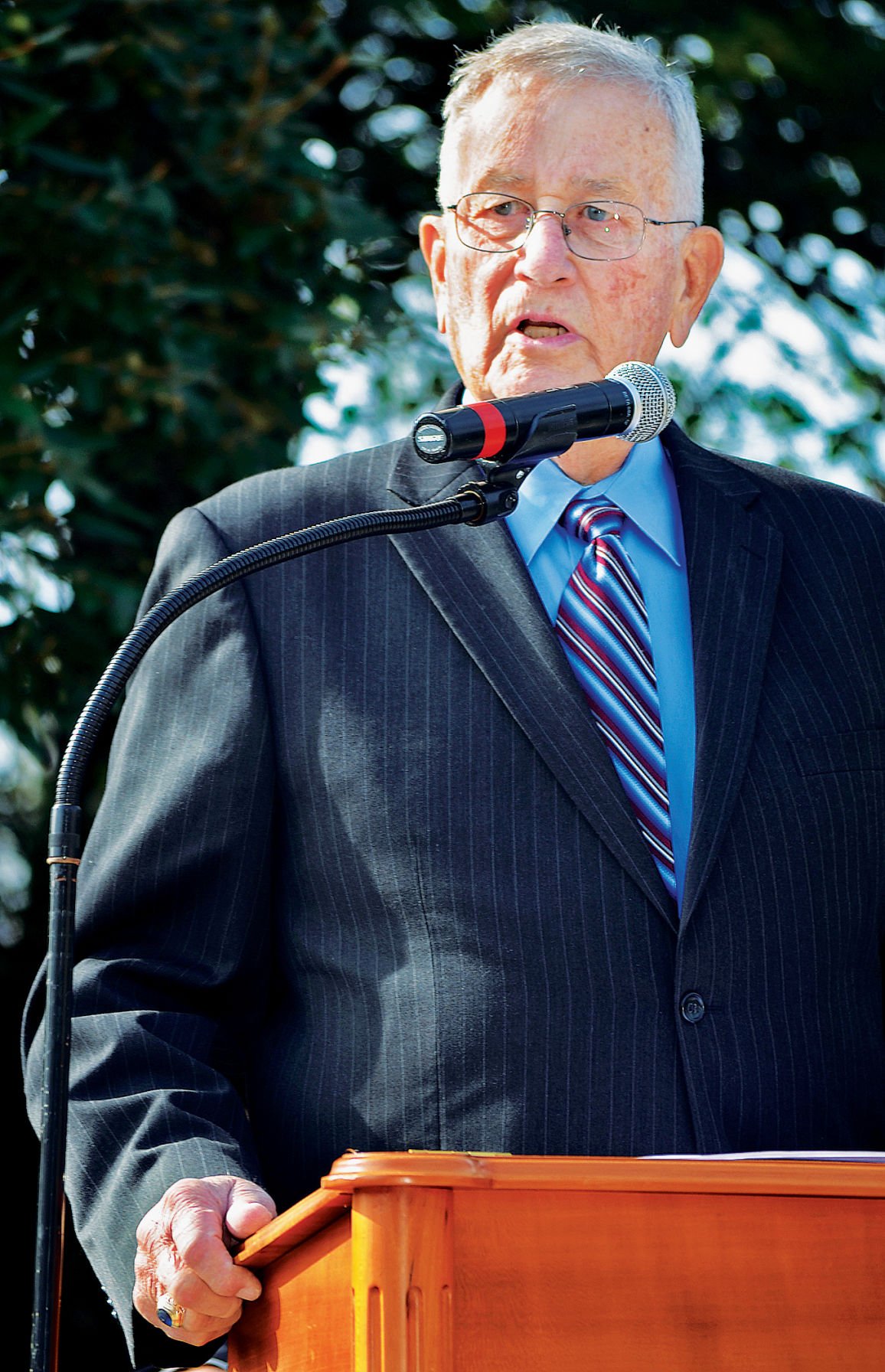 Retired U.S. Army Col. Richard Leadbetter discusses the virtues of citizen soldiers and the need for clarity regarding wars' purposes during the Veterans Day commemoration Nov. 11, 2019, at the Great Falls Freedom Memorial. (Photo by Brian Trompeter)

Retired U.S. Army Col. Richard Leadbetter discusses the virtues of citizen soldiers and the need for clarity regarding wars' purposes during the Veterans Day commemoration Nov. 11, 2019, at the Great Falls Freedom Memorial. (Photo by Brian Trompeter)

Unlike in World War II and the Korean and Vietnam wars, the U.S. military now relies on an all-volunteer force that exempts the general society from risk or the need to hold the country’s leaders accountable, said retired U.S. Army Col. Richard Leadbetter.

“There was no finer soldier than the draftee, the citizen-soldier who when their country called put down whatever they were doing, answered the call and stepped forward to stand on the line,” Leadbetter said during his keynote address Nov. 11 at the Veterans Day commemoration at the Great Falls Freedom Memorial.

Far from being perturbed at having their life plans interrupted, draftees served with distinction, he said.

“They were a great soldier and what they brought to the military was the civilian part of life,” Leadbetter said.

The event drew scores of area residents and the sixth-grade class from Great Falls Elementary. Some attendees arranged their chairs around the memorial, while others – some of whom brought along their dogs – stood in the rear. Among those present was a 93-year-old World War II veteran who served in the European Theater.

The Langley High School Madrigals sang patriotic music, including the National Anthem, “God Bless America” and all verses of “America the Beautiful.”

“Freedom is not free,” Kang said. “Stir our hearts to be thankful and not to take our liberties for granted, because they were achieved and protected by many sacrifices of our military personnel in times past and present.”

Leadbetter, speaking in the strong accent of his native Maine, told how Andy Wilson – president of the Friends of Great Falls Freedom Memorial – had served as a U.S. Army Airborne Ranger and was a platoon leader in Vietnam. He was badly wounded in a firefight and after first being sent to Guam, he later convalesced for a year and a half at the Walter Reed military hospital.

One positive outcome from Wilson’s experience: He met his wife, Nancy, at the latter hospital. She was at the ceremony, too, and waved to the crowd from the berm where she was videotaping the proceedings.

Leadbetter, who served for 22 years on active duty and commanded the 127th Military Police Company in Vietnam, lauded how draftee soldiers had performed in World War II and how the rest of American society had stood behind them and their mission, producing massive amounts of tanks, airplanes and other vital war materiel.

“That’s the ‘Greatest Generation’ – the combination of a superior fighting force and a country like the United States 100-percent dedicated to supporting that fighting force,” he said. “There was never a question in World War II on what we were doing, where we were going to be and what the end would be. The end would be when Germany surrenders and Japan surrenders and that’s it.”

Leadbetter then moved ahead to the Vietnam War, which began subtly with military advisers in that Southeast Asian nation in 1957 and ramped up heavily in the mid-1960s, with about 2.7 million U.S. troops eventually serving in the war.

When Leadbetter returned from Vietnam in 1967, the country’s mood had turned sullen – and for good reason, he said.

Protesters rightly were unhappy about the war, but erred by blaming the soldiers instead of the country’s leadership, Leadbetter said. The colonel also was displeased with the county’s longest war ever, the one still occurring in Afghanistan.

“Since when did the United States become involved in a war for 18 years?” he asked. “So I asked myself why, and to me the answer is, the general population has no skin in the game. There isn’t even anybody who asks questions anymore.”

Leadbetter quoted from a missive about military service, which stated that every veteran has signed a blank check to his or her country without knowing what the price would be.

“The title of veteran, in my opinion, cannot be bestowed. It cannot be given to somebody,” Leadbetter said. “It is a title that’s earned. Once earned, it can never be taken away. Once a soldier, always a soldier. Once a veteran, a veteran for life.”