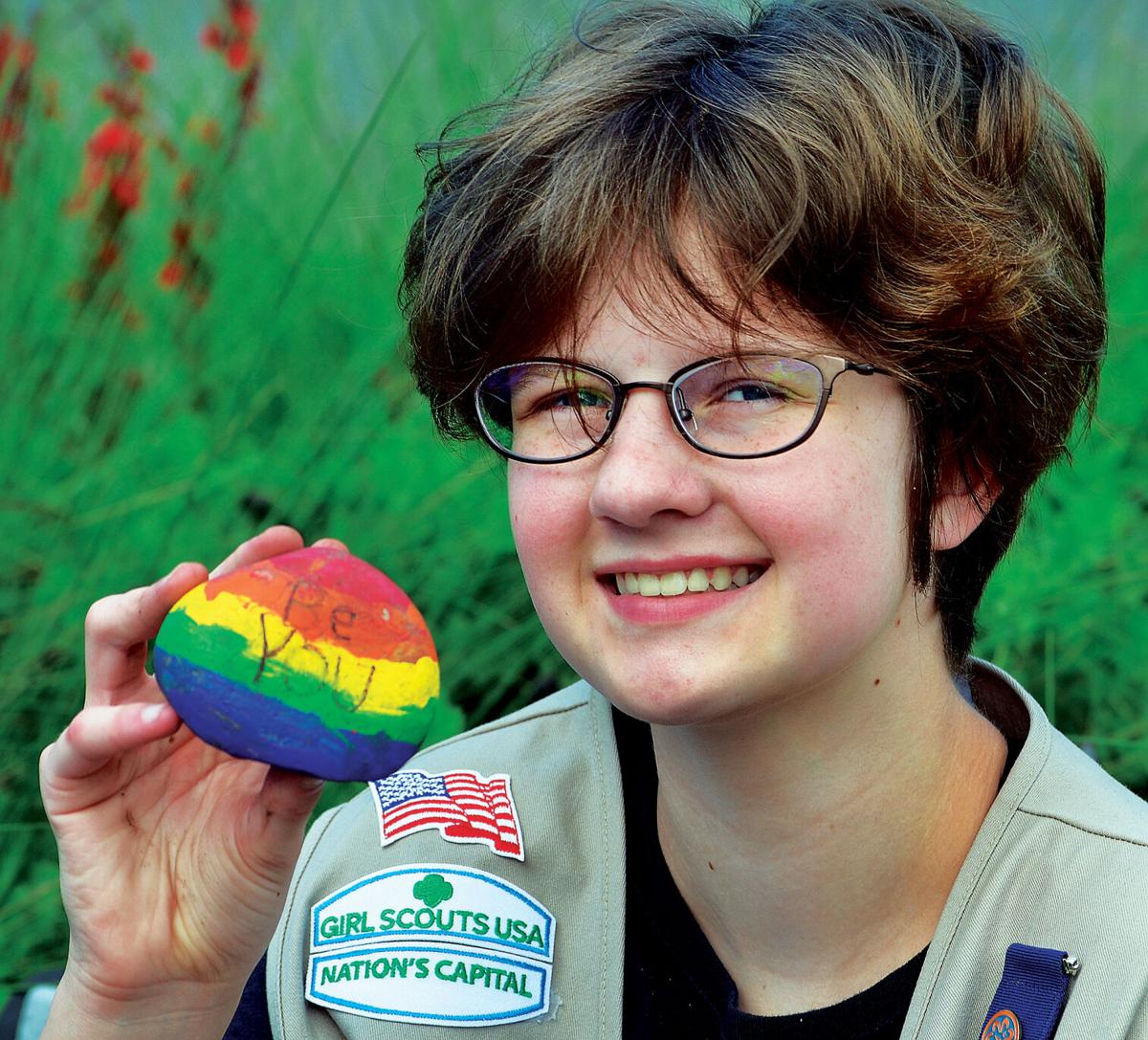 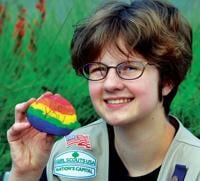 Alex Emmerich of Vienna, who belongs to Girl Scout Cadette Troop 1489, holds up the rock she painted with a rainbow theme for the Vienna Arts Society's "kindness" project in August 2020. (Photo by Brian Trompeter) 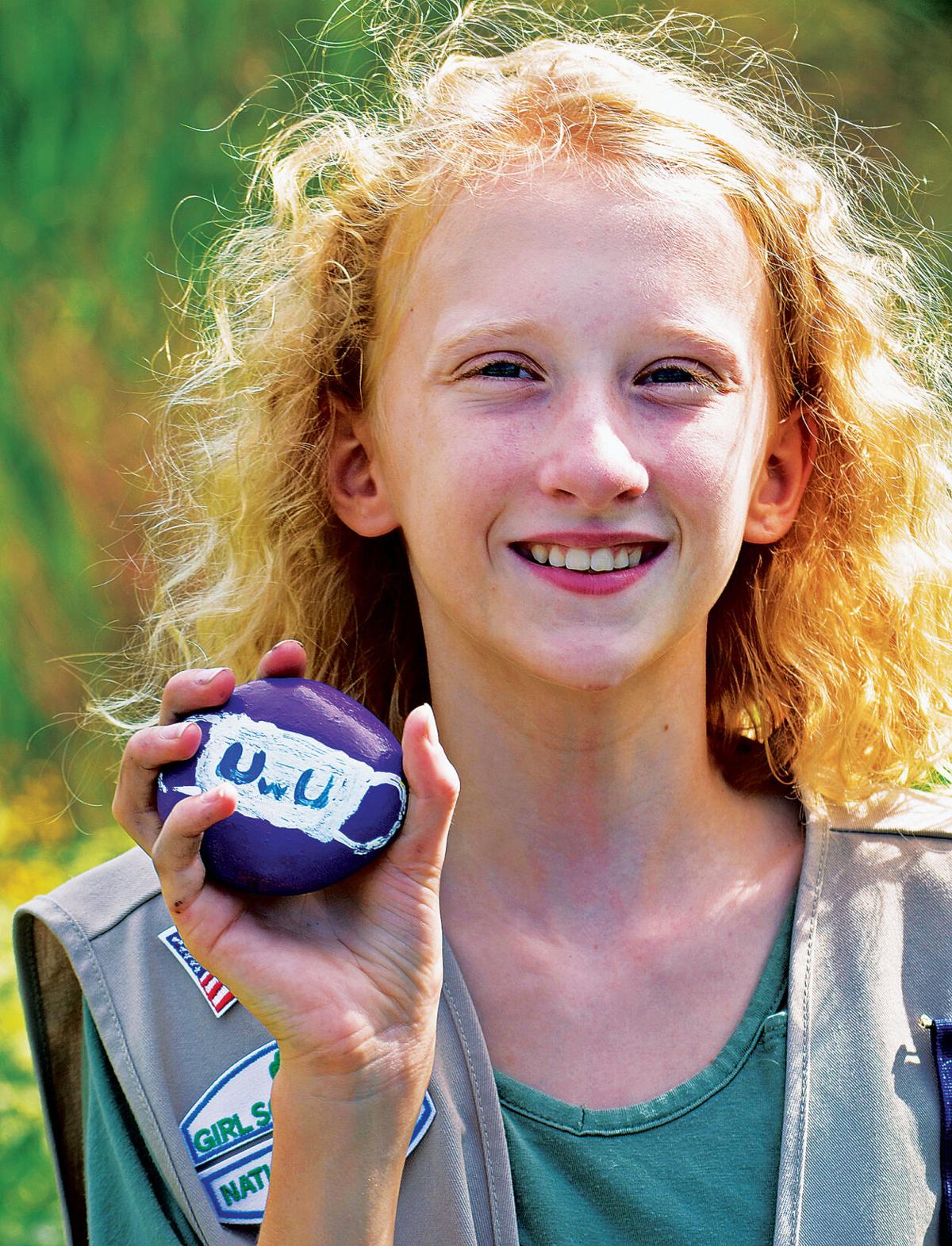 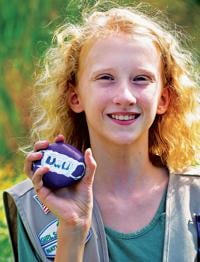 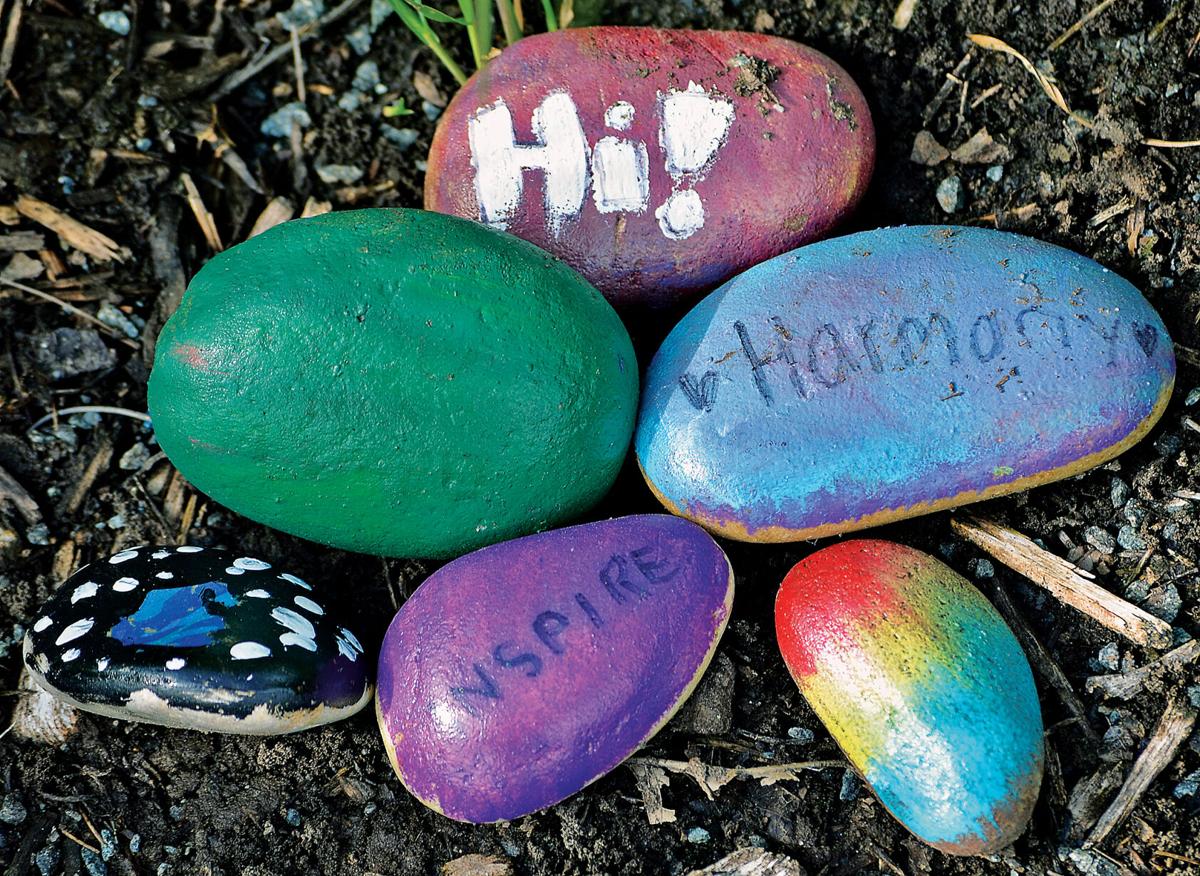 These are some of the kindness-themed inspirational rocks, painted by local Girl Scout and Cadette troops, that may be found in the gardens at the Vienna Community Center. (Photo by Brian Trompeter)

Alex Emmerich of Vienna, who belongs to Girl Scout Cadette Troop 1489, holds up the rock she painted with a rainbow theme for the Vienna Arts Society's "kindness" project in August 2020. (Photo by Brian Trompeter)

These are some of the kindness-themed inspirational rocks, painted by local Girl Scout and Cadette troops, that may be found in the gardens at the Vienna Community Center. (Photo by Brian Trompeter)

While walking the grounds of the Vienna Community Center and Town Green, slow down and keep your eyes open for small, brightly painted rocks with messages such as “Stay Calm,” “Harmony,” “Inspire,” “Open Your Heart” and “In a Gentle Way, You Can Shake the World – Gandhi.”

Local Girl Scouts met in person in the middle of last month, for the first time since the pandemic began, to paint stones for “Rock Your August with Kindness,” the Vienna Arts Society’s (VAS) third summer project.

The public may admire or even take home the approximately 150 rocks painted by the Scouts, said VAS member Mary Ellen Larkins, who co-chaired the project with MaryBeth Davis.

“If somebody wants one, they can take it, keep it, give it to someone else or move it someplace else,” Larkins said.

The arts group coordinated on the project with Vienna Girl Scout Service Unit 50-10, which has 44 troops serving 513 girls from kindergarten through 12th grade. Twenty-six rising middle- and high-schoolers on three teams encouraged participation in the project, tracked its progress and managed aspects of the initiative, said Deborah Brandt, the service unit’s manager.

VAS leaders had the Scouts paint smooth, rounded river rocks purchased from hardware stores and place them in two gardens at the Vienna Community Center and atop the Town Green’s stone wall.

“You clean the rocks with water and then you use acrylics,” said Larkins, an artist who often works with glass. “After I paint them and they dry, then I use a varnish spray to protect them a little bit, because they’re going to be out in the elements for a while.”

Among the girls who took part in the project were Cadette Troop 2579 members Zelda Hornberger and Lily McGuire, both of whom are rising sixth-graders at Marshall Road Elementary School.

Hornberger’s favorite rock theme was “gratitude,” but she also showed a whimsical side by painting a stone to look like a green avocado half with arms and a face. The favorite rock painted by McGuire had a flower on one side and “Bloom” on the other.

“It’s pretty and that makes me happy,” McGuire said.

Alex Emmerich, 12, a rising eighth-grader at Thoreau Middle School, painted six rocks. Their designs ranged from smiles and solid colors to a rainbow-emblazoned rock with the message “Be you.”

“Especially now, anyone could use a little extra positivity and happiness, an extra little boost,” she said.  “I know someone who walks through [the garden] can see one of my rocks, smile and feel a little better.”

She painted five rocks for the project, some of which already have been taken away by visitors at the community center’s gardens. Among her designs were rocks with a smiley face, a sky motif with the words “Be cool, be you” and a daisy with the message “If you hate yourself, you just haven’t bloomed yet.”

Adeline Emmerich said she likes to sketch and paint, but found it challenging to paint the rocks’ rounded surfaces and cover all their crevices. Another task was producing designs with universal appeal.

“It was a challenge coming up with something that made people happy and that everyone would understand,” she said.

The girls’ mother and troop leader, Aimee Emmerich, said the project proved a boon to troop members because until their recent rock-painting session, they had been prohibited to meet in person owing to the pandemic.

“I think it was really important for the girls to come together, to have an impact on the community right off the bat,” she said. “It’s kind of been stressful, the troop’s trying to meet online and all of that. They just unwound. It’s positive way, as a group, for them to kick off the year.”

Inspired by the recent project, troop members also are thinking of painting rocks that could be laid out at schools to welcome back teachers.

“They have a lot of opportunities in the Girl Scouts to contribute and it really helps them to be more community-active on their own and show initiative,” she said.

VAS worked with the Scouts on the August rocks project in lieu of holding a public event with performing groups Oct. 24 and 25 at the community center’s new gymnasium. At that event, which officials canceled because of the pandemic, the Girl Scouts has been slated to paint rocks alongside other children and adults.

VAS conducted two other projects this summer, “Chalk the Walk” in June and “Gratitude Signs” in July, but has nothing slated for September.

VAS leaders earlier this year scheduled events at the Vienna Community Center and the group’s gallery space, the Vienna Art Center, but the public-health crisis altered those plans.

“The main reason that we started this ‘kindness project’ in early January is we wanted to keep the name of the Vienna Arts Society alive after the great bench project that we did last year,” Larkins said. “We also felt it was really important that people did more kindness in our community. Little did we think that the virus was going to come along. People are doing some wonderful things – helping families in need and helping some neighbors.”