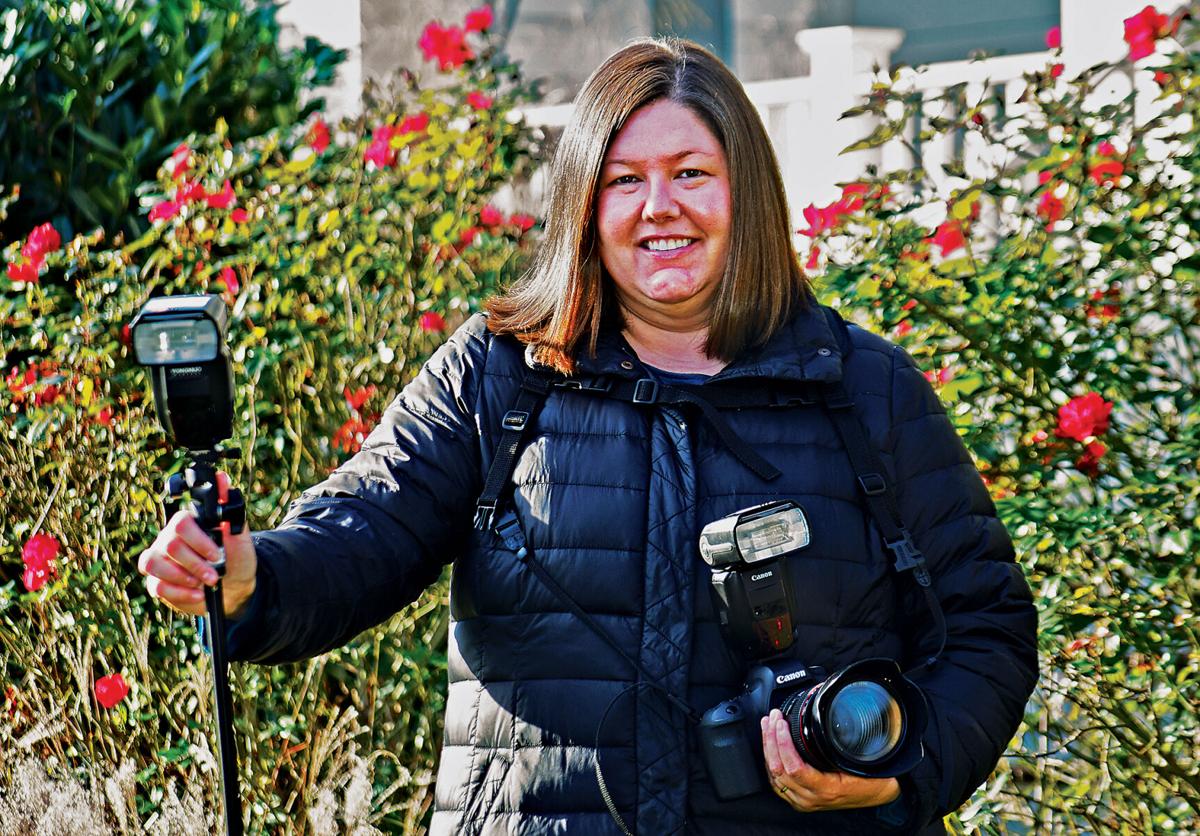 Arlington-based photographer Sarah Goldman has photographed many families this year for the Front Steps Project. (Photo by Brian Trompeter) 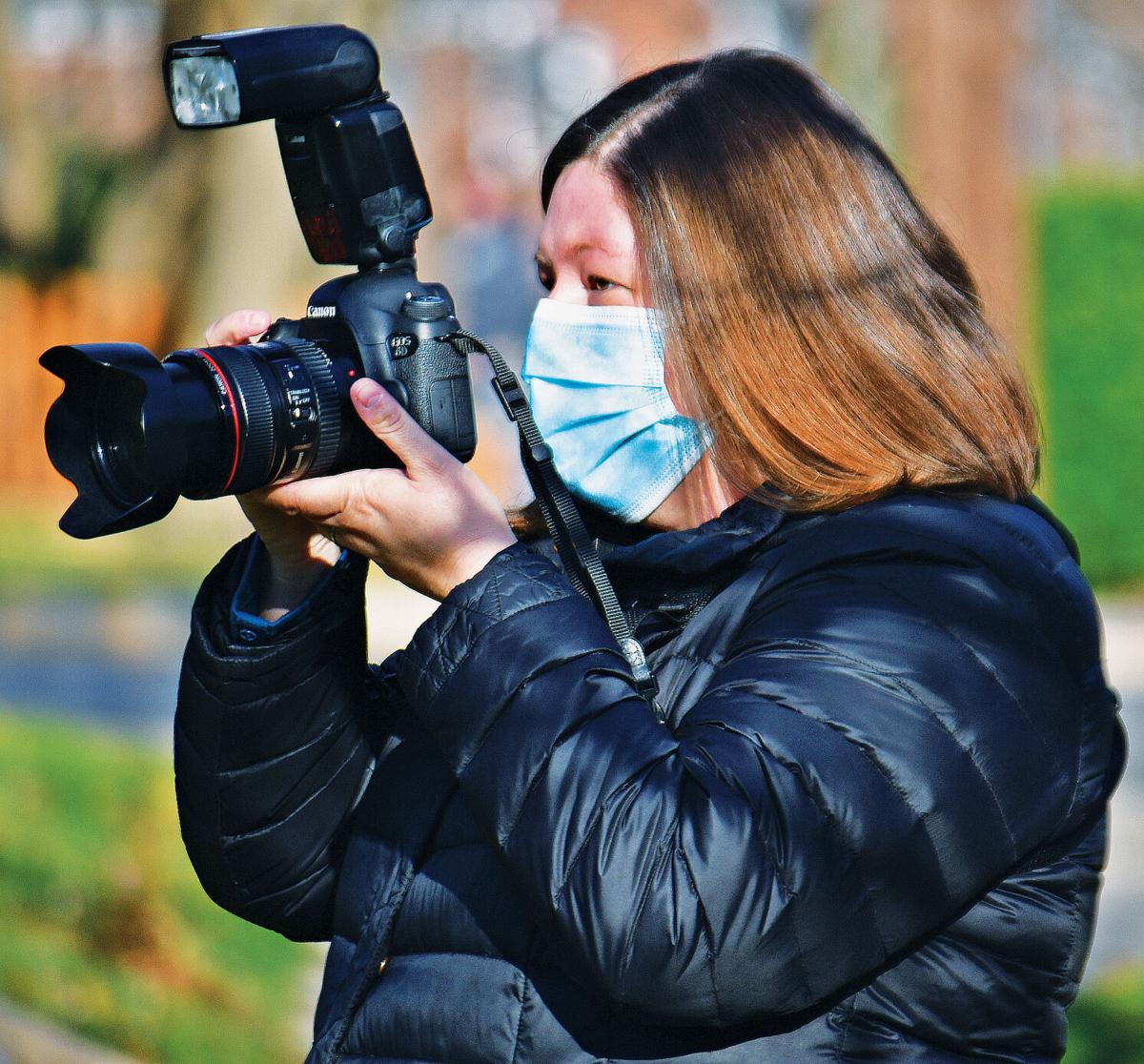 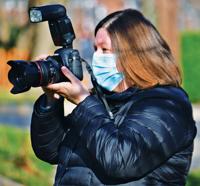 Sarah Goldman of Arlington trains her camera on one of 10 families she photographed Nov. 24, 2020, as part of the Front Steps Project. (Photo by Brian Trompeter) 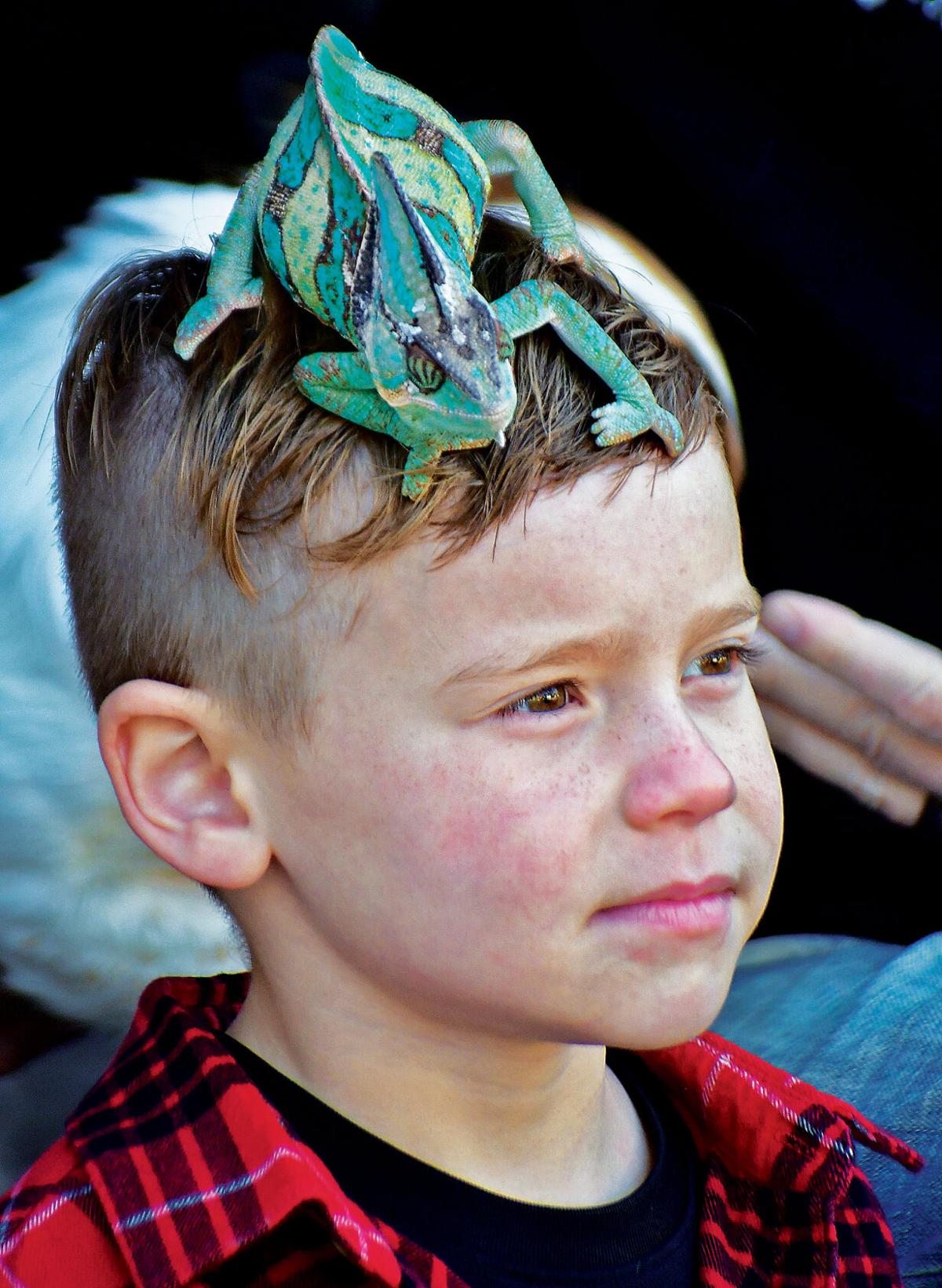 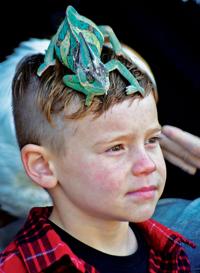 Arlington resident Reid Heller poses with the family's chameleon, Barry, on Nov. 24, 2020, as part of a photo shoot for the Front Steps Project. (Photo by Brian Trompeter) 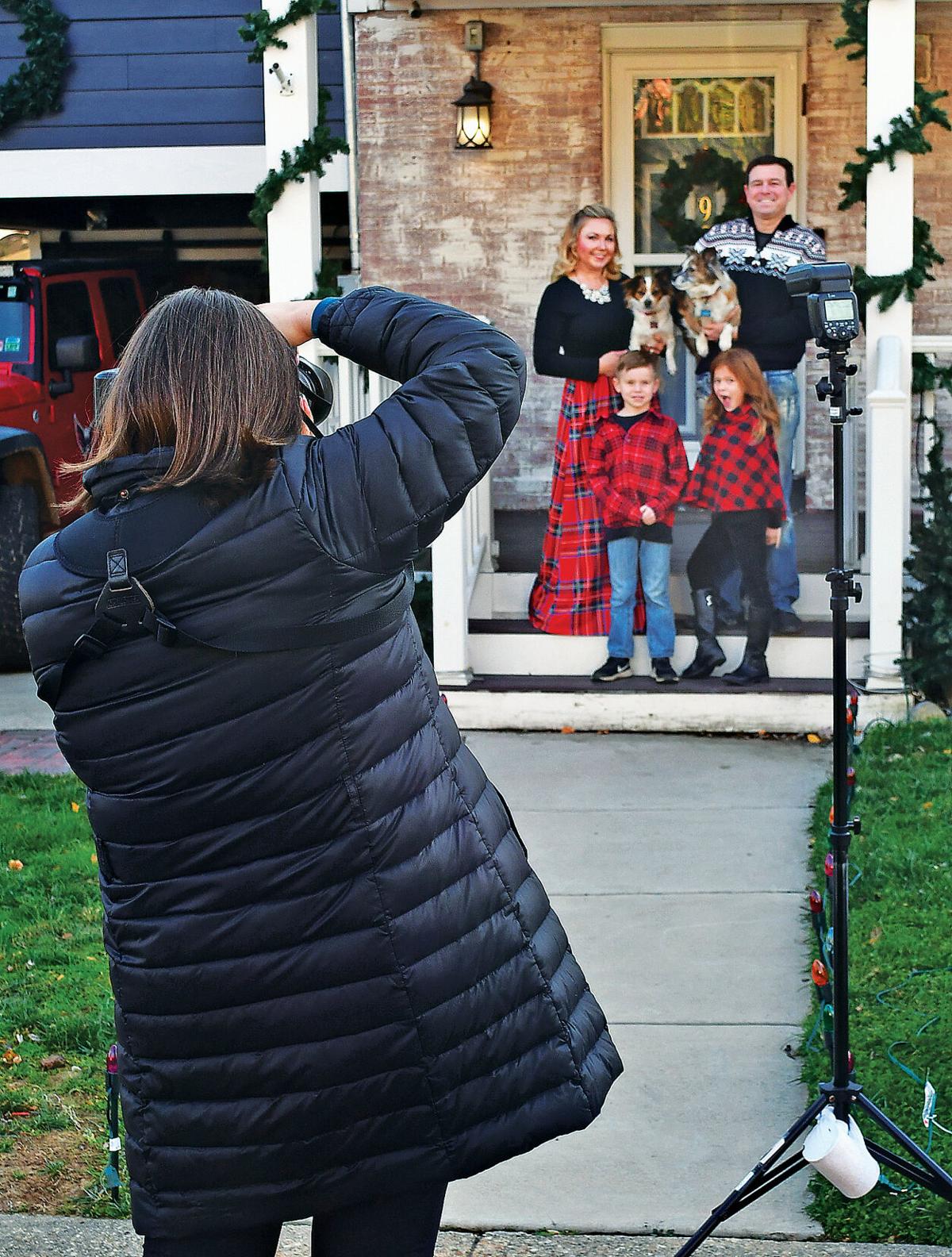 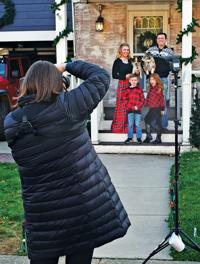 Arlington-based photographer Sarah Goldman has photographed many families this year for the Front Steps Project. (Photo by Brian Trompeter)

Sarah Goldman of Arlington trains her camera on one of 10 families she photographed Nov. 24, 2020, as part of the Front Steps Project. (Photo by Brian Trompeter)

Arlington resident Reid Heller poses with the family's chameleon, Barry, on Nov. 24, 2020, as part of a photo shoot for the Front Steps Project. (Photo by Brian Trompeter)

Arlington-based family photographer Sarah Goldman is putting her people and artistic skills to work to benefit charities during the pandemic.

Goldman this year has photographed more than 100 families – 10 on Nov. 24 alone – as part of the “Front Steps Project,” a fund-raising initiative started March 18 in Needham, Mass., by Kristen Collins and Boston photographer Cara Soulia.

Goldman photographs donating families outside their homes from at least 10 feet away, and within a week e-mails them digital files of the images. Her efforts have raised more than $13,000 so far.

Goldman initially photographed families for the project in March and early summer, with donations benefiting Cavalry Women’s Services and Arlington Food Assistance Center. Proceeds from her efforts this fall will go to Virginia Hospital Center Foundation.

Arriving at the Heller family’s Arlington residence shortly before 8:30 a.m. for her first appointment on Nov. 24, Goldman began readying her equipment in the chilly autumn air. She attached the straps of her Canon 6D, full-frame digital single-lens-reflex camera to a nylon harness over her black, quilted down jacket.

Family matriarch Emilie Heller, wearing a festive red-and-blue plaid dress, greeted Goldman from the porch and went back into the house to retrieve her husband Ben, daughter Samantha and son Reid.

The Hellers also brought out a menagerie of two dogs, a cat, a bearded dragon lizard, hermit crab and a chameleon named Barry, which perched itself on Reid’s head. Goldman also has photographed parrots as part of the project, and says cats tend to be the least-cooperative animal subjects.

Both Heller children were born at Virginia Hospital Center, so the family was eager to contribute toward the hospital’s foundation, Emilie Heller said.

“It seemed like a great way to donate,” she said.

Goldman’s second stop of the day was several miles away at the Arlington residence of Genie Priddy, her husband Jim Thomas and their daughters Georgia, Charlotte and Samantha Thomas.

“I thought it was an amazing idea and wanted to be part of it,” said Priddy, a psychiatrist with a private practice in Washington, D.C. In addition to providing fodder for Christmas cards, Goldman’s images also will be the first high-quality photos taken of the family in recent times, she said.

Unlike hobbyists, who can wait as long as they need for perfect lighting, or studio photographers, who control the setting and supply their own illumination, photographers with the Front Steps Project must make the best of the available lighting and backgrounds.

Whereas the Hellers’ front porch was entirely in shade during the earlier shoot, giving the scene a bluish cast that could be corrected with electronic flash and post-shoot image processing, the Priddy and Thomas family’s home faced into the sharp sunlight and its door was half in shadow.

Goldman ended up photographing that family first facing the sun on the porch steps, then side-lighted on the lawn with their faces in the shade. She used an on-camera flash and a secondary flash mounted on a light stand. Although she carries multiple lenses in her equipment bag, she only has used a medium-range 24-105 mm zoom lens for her Front Steps images.

Goldman always photographs at least two different poses and settings during shoots for the project. If families want photos taken from an angle that Goldman, a 17-year professional, knows won’t be advantageous, she photographs it their way and then suggests an alternative – which the subjects in the end usually prefer.

The photographer typically begins sessions by having family members look into her camera, then has them relax, talk with each other, pet any animals they’ve brought to the shoot. One family had her photograph them bouncing on or looking through a backyard trampoline, which had been the children’s go-to entertainment source during the pandemic.

She often has photographed family members standing apart from each other, especially if they’ve arrived from out of town, but families tend to prefer images where their kin are grouped more closely together, Goldman said.

A certified master photographer with the Professional Photographers of America, Goldman always recommends that her customers print their images. Digital files eventually either get lost or become so obsolete that they can’t be accessed, she told one interviewer.

Goldman grew up in a small Ohio town and worked for 12 years as a marine biologist. She did internships in Florida and Hawaii, focusing on education, conserving sea turtles and doing research on manta rays. She also spent a decade at the South Carolina Department of Natural Resources, where she did research on reef fishes.

She typically spent 40 to 50 days at sea each year, and discovered she was becoming more seasick on those voyages. Because of that, and the desire to spend more time with her family, Goldman then switched to a career in photography, and has won awards for her work.

Goldman will continue doing photo sessions for the Front Steps Project – which typically last only five or 10 minutes each – through Dec. 16. Participating families must live within 5 miles of the hospital.