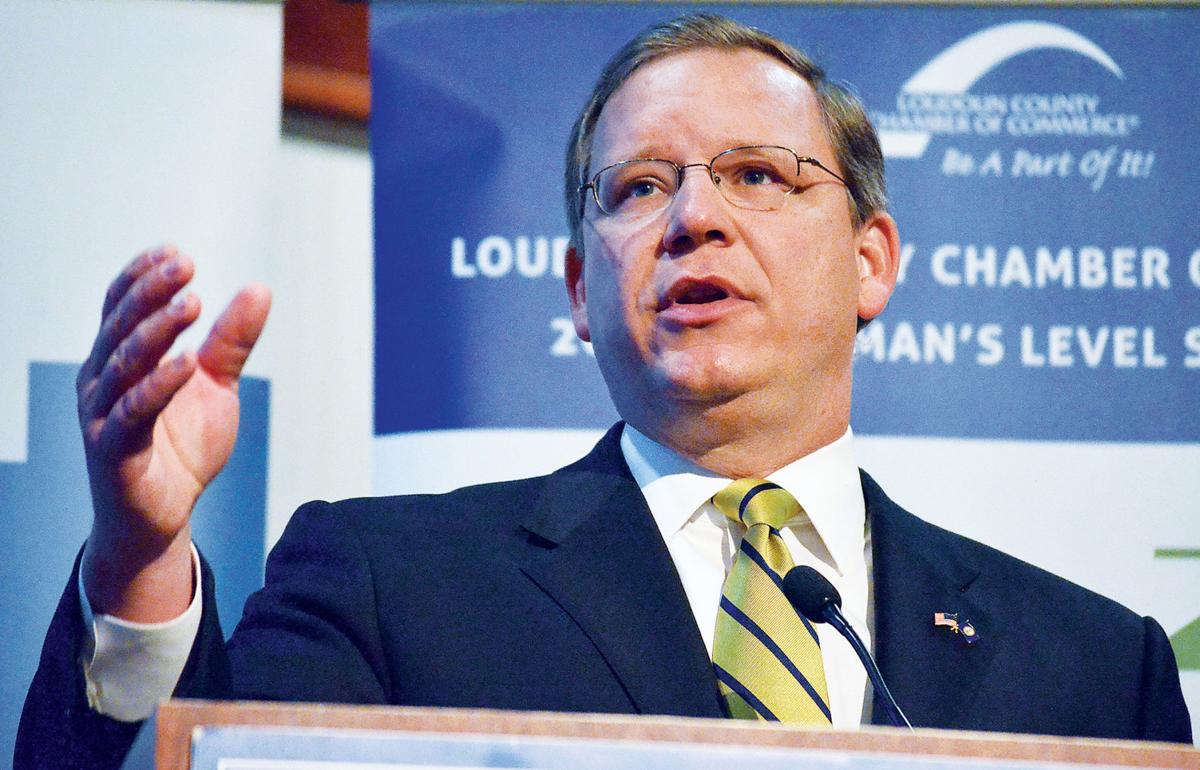 Republican candidate John Adams contrasts his positions with those of incumbent Virginia Attorney General Mark Herring (D) during an Oct. 20 debate at The National Conference Center in Lansdowne. (Photo by Brian Trompeter) 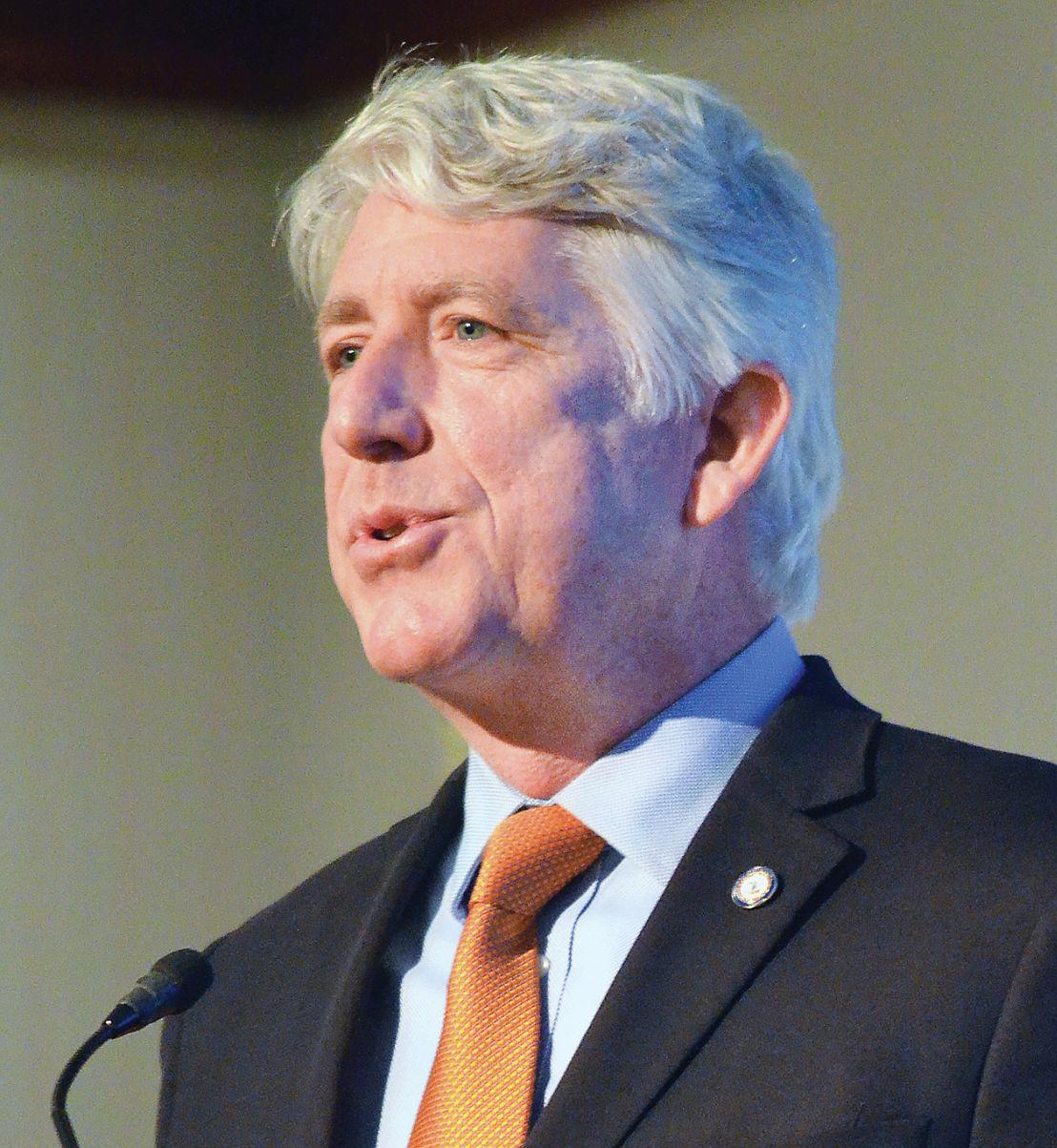 Republican candidate John Adams contrasts his positions with those of incumbent Virginia Attorney General Mark Herring (D) during an Oct. 20 debate at The National Conference Center in Lansdowne. (Photo by Brian Trompeter)

The two contenders for Virginia attorney general laid out differing visions at an Oct. 20 debate in Lansdowne and accused each other of being too ideological.

“I am a pro-business, pro-opportunity attorney general,” said Herring, who formerly had a private law practice and served on the Loudoun County Board of Supervisors and in the state Senate. “I’m running for re-election to help keep Virginians safe, to lend a helping hand to those who need it. I believe the attorney general is the people’s lawyer and I am accountable to you.”

Republican John Adams, a first-time candidate, touted his service in the U.S. Navy and as a lawyer and vowed to get the politics out of the attorney general’s office.

“In my life, in the real world, what matters are results and actions, what actually happens,” Adams said. “So when I was a naval officer, if you didn’t do your job, people would get hurt or killed. When I was a federal prosecutor, if you didn’t do your job, dangerous people would be put back out into our community. And as a lawyer in private practice, if I don’t do my job, my clients go somewhere else.”

The candidates wasted little time in going on the attack. Adams said Herring had taken positions opposite the state’s laws regarding voter identification, “right to work” rules and one [since superseded by a U.S. Supreme Court ruling] regarding same-sex marriage.

Herring countered that former Virginia Attorneys General Ken Cuccinelli and Jerry Kilgore, both Republicans, had on occasion declined to enforce certain laws. Herring added he’d only refused to enforce the same-sex-marriage law because it went against a fundamental right. Virginia has a long history of being on the wrong side of landmark civil-rights cases, such as those involving school segregation, interracial marriage and gender-inequality in higher education, he added.

Adams said it was unacceptable for the attorney general to side with the opposition just because he thought the Supreme Court would overturn the ruling.

“Virginia had taken a legal position and Virginia was entitled to have its attorney general defend the case,” Adams said.

“He wants to be the lawyer of the Republican caucus down in Richmond,” Herring said. “He wants you to think that where he stand on certain issues isn’t relevant to the job. Nothing could be further from the truth.”

Adams said Herring’s take on his birth-control position was incorrect and based on briefs he had filed on behalf of Little Sisters of the Poor and Hobby Lobby.

“I thought it was wrong of the government to force people to do things that violated their religious beliefs,” Adams said.

The candidates also sparred over the recent request by Republicans in the General Assembly to have the Joint Legislative Audit and Review Commission (JLARC) investigate how Herring’s office does business.

Herring chalked it up to near-Election Day political shenanigans, saying the General Assembly’s own auditor of public accounts recently given the attorney general’s office a clean audit.

Adams cited Associated Press reports that Herring had gone around federal guidelines and used money from a legal settlement to provide pay raises to key employees in the attorney general’s office.

Asked for compliments about the opposing candidate, Herring said he admired Adams’ record of public service and Adams said Herring had shown genuine concern about the state’s opioid crisis.

Herring is the only member of Virginia’s executive branch who is seeking another term in the Nov. 7 election. State law prohibits Gov. Terry McAuliffe (D) from seeking a second consecutive term, and Lt. Gov. Ralph Northam (D) is vying against Republican Ed Gillespie to succeed McAuliffe.

The debate, hosted by the Loudoun County Chamber of Commerce at The National Conference Center, was moderated by chamber president and CEO Tony Howard. Panelists Maggie Parker of Comstock Partners, Stacey Metcalfe of Inova Loudoun Hospital and Lisa Hooker of Northern Virginia Electric Cooperative (NOVEC) poses questions to the candidates.

“I thought John made the choice very clear,” Herrity said. “This is about what you want as an attorney general, a politician or a lawyer . . . John wants to be a lawyer for the people of the commonwealth.”

“I certainly think Mr. Herring has an incredibly positive record to run on and that came out,” she said. “The issues I feel passionately about – the older PERK kits getting tested, the opioid crisis, Medicaid fraud investigations and running a professional, objective [attorney general’s] office – are things that matter to me. I really thought Mark could make substantial arguments as to why he’s just the better candidate in those areas.”

Anya Taylor-Joy has no place to call home