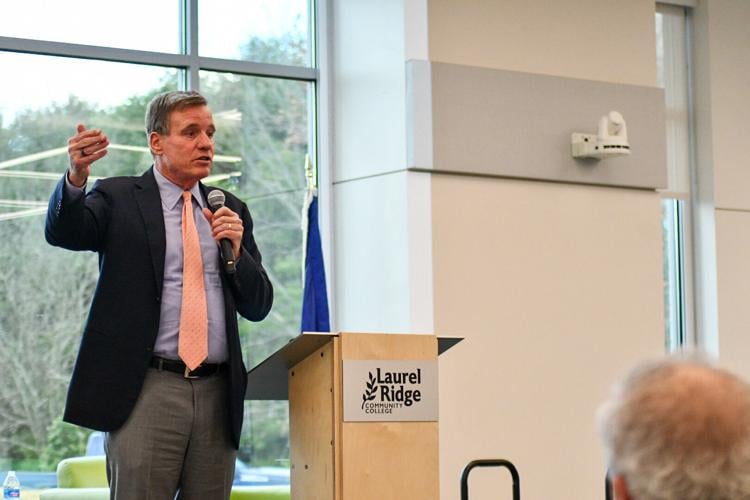 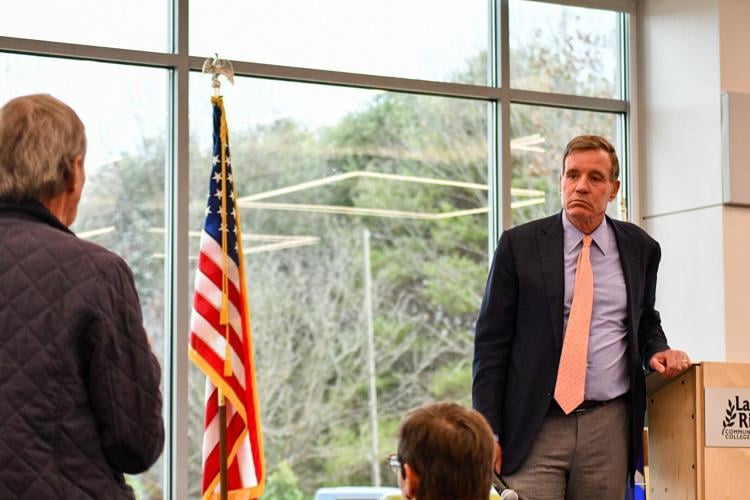 Sen. Mark Warner fields a question from a constituent during a Fauquier Chamber of Commerce event at Laurel Ridge Community College on Jan. 20.

Speaking to a room full of local elected officials and other community stakeholders at Laurel Ridge Community College on Friday, Sen. Mark Warner, D-Va., touted Democrats' accomplishments over the last two years and emphasized the party's willingness to seek bipartisanship with Republicans in Congress on several major bills that were passed on infrastructure, climate, prescription drug costs, semiconductors and guns.

During the event, hosted by the Fauquier Chamber of Commerce, Warner also expressed frustration that his Republican colleagues have “threatened” to oppose increasing the nation's debt limit, which he noted would wreak economic havoc on the global economy.

“We screw up on this debt ceiling, your stock market, you're going to see carnage,” Warner told one Fauquier resident and business owner who asked how the debt ceiling would impact people like him.

Last week, the U.S. hit its debt limit, which is the total amount of money the federal government is authorized to borrow to meet its financial obligations, including Social Security and Medicare benefits, military salaries, interest on the national debt, tax refunds and other payments.

The U.S. Treasury has employed several measures to ensure the government can still pay its bills through June. But it is unclear whether Congress will find a way to increase the debt ceiling or default on its debt, potentially resulting in another recession.

Warner, who serves as chair of the Select Committee on Intelligence and is a member of the Senate Finance, Banking, Budget, and Rules Committee, described the debt ceiling as a “political hand grenade” that does nothing but “create chaos.”

Republican lawmakers have vowed to vote against raising the debt ceiling unless Democrats promise to reduce spending. But Warner argued Republicans raised the debt ceiling three times during Donald Trump’s administration “without injury.”

Warner did note that several colleagues on his side of the aisle “refused to acknowledge” government spending on programs, such as Social Security, is disproportionate to the amount of revenue being generated.

But he noted adjusting the cost of Social Security needs to be handled in a “systematic way” rather than “scare the heck out of people and make them think they’re going to lose their Social Security.”

Hey Senator Warner - now do the one about the carnage that will occur if we keep increasing the debt!

He posts the most stupid Democrat dictate. Do you really think he believes all the leftist garbage he posts? He can appear articulate on a few occasions, yet always reverts back the same leftist cesspool to smear those smarter than him. He loves Biden. That says it all.

Insidenova when Warner talks about the federal debt: let's write about that

Insidenova when Rim Kaine calls for a special council to investigate biden: let's write about his reelection and a terrible soda he likes.

Wasn't Mar-a-lago front page news at this rag? Haven't seen anything on what is most likely the first time a sitting president has had his home searched by the fbi.

Did he also make balloon animals and honk his horn? Dishonest Clown

Why do Senator Warner fail to even mention the catastrophic train wreck that consistently increasing the debt ceiling is ensuring? We are already spending half a trillion dollars a year on interest for the debt.

Default on the debt, ban the IRS, incorporate a modest consumption tax for the middle class, end social security for good, or at the very least allow an opt-out. Amend the constitution thereafter to include a balanced budget. (This is 100% wishful thinking, our politicians are morally corrupt and would never do what's in the best interest of the people for the long term). Never going to happen!

I hope this happens. I hope Republicans openly support this to the fullest extent possible.

I WANT elderly people to work. I want them to be discarded from the workforce because I can hire a fresh out of college kid who has more tech skills than a 65 year old. The elderly don't produce any meaningful work right now and are a drain on the economy. They deserve to live like the times before Social Security. I am tire of paying for Grandma.

I want Republicans to show how fiscally irresponsible they truly are. A consumption tax that puts a disproportionate burden on the Middle and Lower class (at a rate of at least 30%) will kill any savings that they have and exacerbate any and all income inequality.

Totally on board with killing the IRS. We can go back to poll taxes and paying higher prices. In addition, the more populous states will have more power, since there is no central, federalized income authority. So, yeah, Republican states will get the shaft.

The IRS is a grandiose farce and you know it!

Alternative? I don't want a sky high consumption Tax either, but I'll take it over vicious thuggery any day of the week. Plus, if I don't have to pay into social security anymore, I'd accept it!

I'll agree with the first part of your proposition. But there are still plenty of older folks who are capable of working, even into their late 70s. Some prefer it that way, btw.

Takes two to tango, the entire system is "fiscally irresponsible!"

Must have been painful voting for Biden. Have you been slapped with any ADEA lawsuits yet?

Sometimes, you need to green the field i order to capitalize on your income.

Glowing example of a Royal Azho - I work full time and contribute greatly to the economy over 4k in properly tax and well over 30k in income tax, and I am one of those elderly discards you so despise with no tech skills, been doing tech since 1986 and the IBM XT - if you can recall that far back thru your addled bigoted mind.

I am glad you took this as a personal attack. The topics I covered have been proposed by Republicans multiple times.

Harness that energy and direct it toward your representative and expect better!

Rebecca Black has been 'discovering herself'