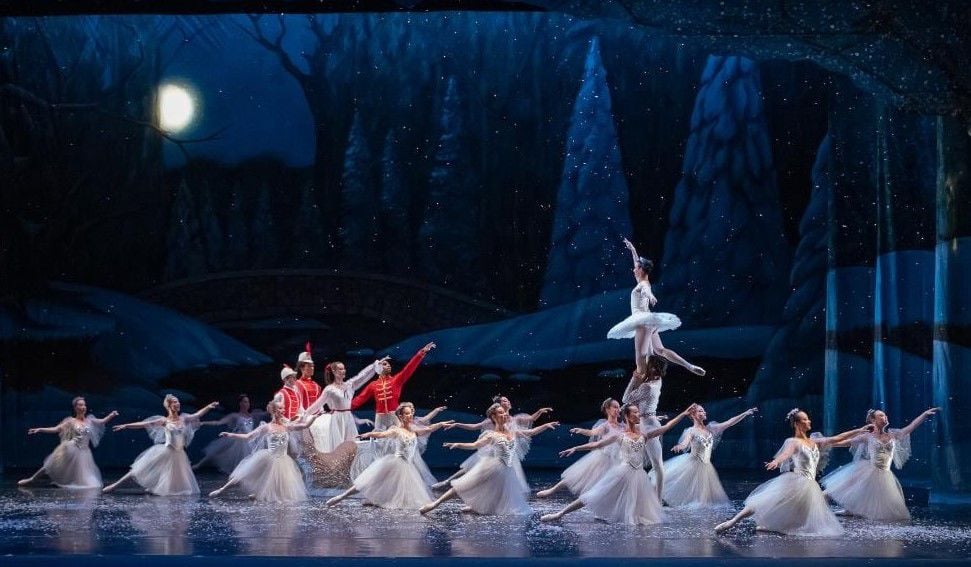 There’s no illusion to this tribute and salute to the Snow Queen- it is real! 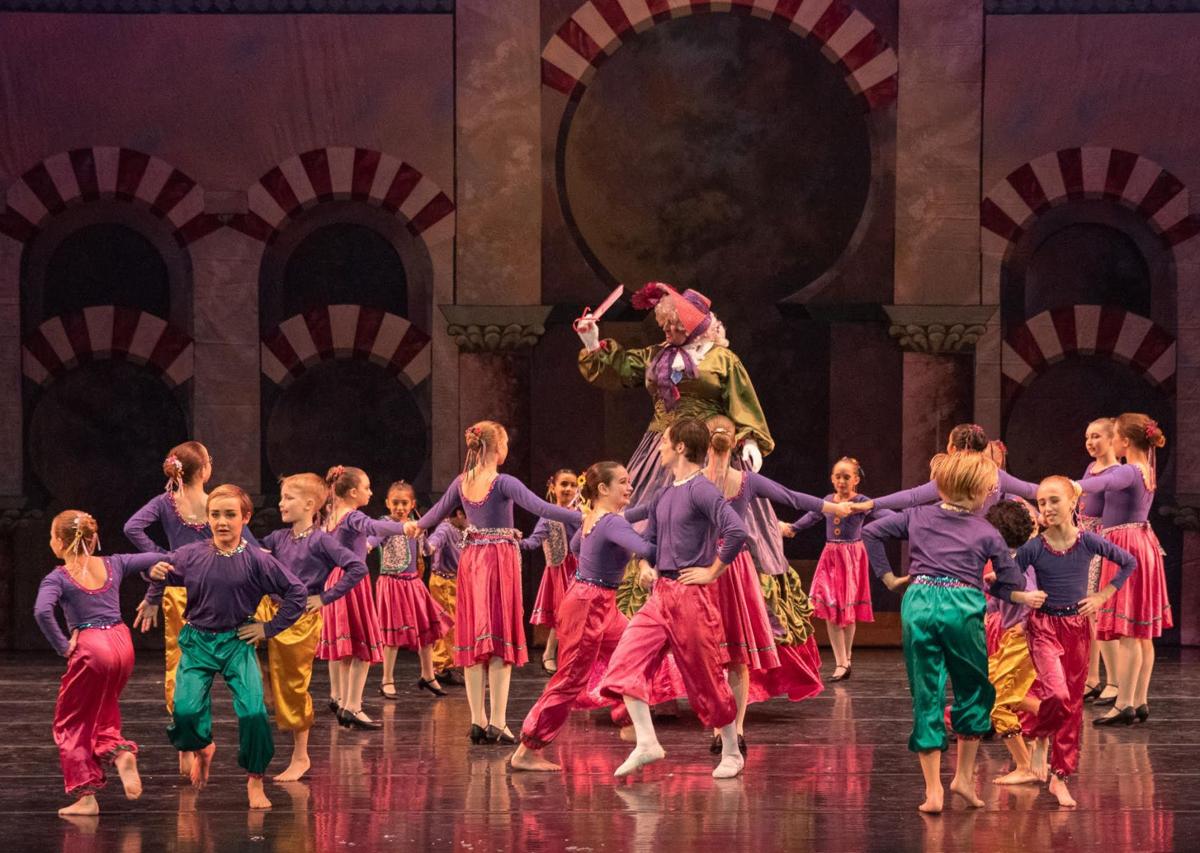 A troupe of dancers, acrobats, and future divas being led by Mother Ginger.

What made Manassas Ballet Theatre’s production of Tchaikovsky’s 1892 “The Nutcracker” score worth attending was its uniqueness to the region: 18 professional dancers from four continents, a live orchestra of 30 musicians whose symphonic sound filled the hall, and numerous academy students who conjured applause for more than just being precious.  It is also most likely the only one in our country with a real, one-ton historic cannon ready to puff haze to challenge the Mouse King’s brigade.

The opening night performance Dec. 18 was the “Salute to the Military” ceremony.   Navy veteran Marie Komyathy was honored for her service to our country and community.  The Color Guard of the St. Andrew’s Society of Washington, D.C., was in full regalia, with both British and American military members, and included a local pediatrician for many of the dancer alumni.  After the national anthem, the orchestra honored the services with military themes and the color guard raised their flags. Veterans proudly stood as the community applauded them — all were quite humbled.

Whether a rookie to the ballet or a connoisseur, the eight full productions and three student presentations that hosted 3,000 students were amazing.  Highlights to witness were talented musicians, each of soloist quality sharing prestige with the characters they supported; thrilling acrobatics and lifts with exciting dance moves; ballroom waltzes and ensembles that rivaled line dancing enthusiasm; huge hand-painted backdrops and scenery; handmade exquisite costumes; special lighting effects that diffused the light and colors from the warmth of the fireplace to crisp winter; realistic snowflakes falling; and humor and drama from the dancers as actors portraying sibling rivalry and couples’ antics.

MBT has evolved the role of Clara’s godfather uncle to much more of a lead in their Nutcracker.   The magic and mystery of Herr Dosselmeyer elicited gasps from all ages and Andrew Plotner included the audience in the dream by including them in his illusions and secrets.  An MBT dancer before joining the Air Force, he also had an important role in the 2018 Nutcracker as the seven-foot tall fairy tale character illusion of Mother Ginger.

In the choreography narrating the fairy tale, spectacular feats were presented by both the ballet dancers and ballerinas.  The leading roles were well-planned for the two balanced casts allowing for costume changes and rest between challenging performances — both for the professional dancers and Manassas Ballet Academy students.  The costumes created by the company’s mistresses for the youngest toymakers to the transition dolls to the adult partygoers were stunning, helping to create both a playful and historical atmosphere. The scientific invention of the tutu — here both lush and ethereal — continues the beauty of the Snow Corps and Flower Corps intertwined with Tchaikovsky’s music.

The fairy tale allows for both female and male strong characters — Clara is consoled and protected, thwarting the Mouse King’s threat to her prince and then regaled by the Nutcracker Prince and awarded a royal tiara by the Sugar Plum Fairy.  The sensual duets added romance for date night audience members; the audience’s rock star type acknowledgements were proof positive of the spectacular performances.

In the Prologue, the special effect of a transparent screen alongside the partygoers’ strolling arrival, seamlessly allowed the transition to the grand party to be a delightful surprise as the stage was illuminated.  With the youngsters offstage enjoying cake, the adults engaged in a fun gauntlet challenge — the choreography reflecting historic style for late 1800s but the partying for any generation. From the six year olds to the parent guest cast members, all were good actors playing their roles without upstaging the different scenes’ leads.

The mice and rats had great audience appeal displaying rodent traits, doing battle en pointe, and the Mouse King sneaking in some flossing as the curtain ended the act.  Both casts’ Arabian dancers — Chelsea Endris and Shady Mohamed, Christina Franco and Vadim Slavitskiy — wowed the audience with their strength and interactive dance creating visions of mythical deities.  The Harlequin, Columbine, and Military Dolls — Ruslan, Shady, Debora Greer, Jill Signer, Rebecca Hickson, and Chelsea — mastered the classical choreography while steadfastly maintaining marionette poses to the audience’s delight as they were carried offstage.

With the well-known music providing support, the duets, solos and Grand Pas de Deux of the Sugar Plum Fairy and her Cavalier — Julianne Russell and Vadim Slavitskii, Kaitlin Frankenfield and Joshua Burnham — lived up to their entrance and finale with breathtaking beauty.  These pieces are long but the dancers’ ovation-worthy performances more than justified the audience’s patience.

MBT started its Nutcracker performances in 1991 and began multiple weekend performances when first appearing on the Hylton Performing Arts Center’s Merchant Hall stage in 2010.  The 2019 production is history, but an exemplary addition to the community’s archives of cultural phenomena — vibrant and a holiday tradition to be continued. A seasoned attendee of the ballet who attended great Russian and European ballet companies’ Nutcracker performances in her youth stated, “While those were supreme, MBT’s is close in quality and also right here close in the community” so she can attend and experience the similar joy.

'Jazz in Motion' offers an exciting collaboration of dance and music