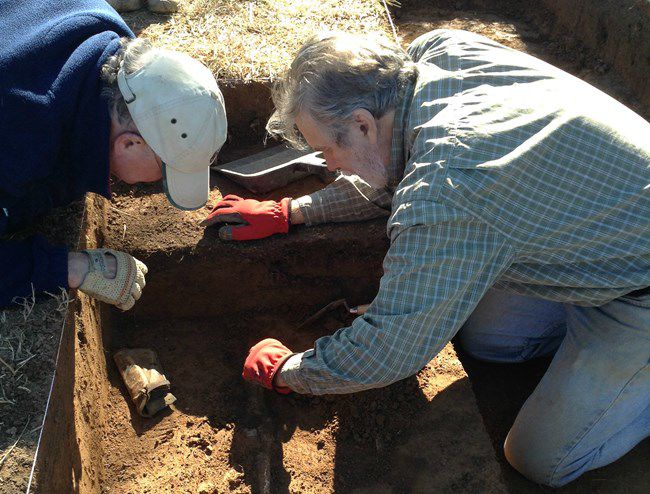 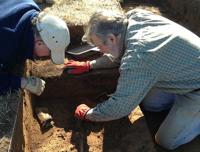 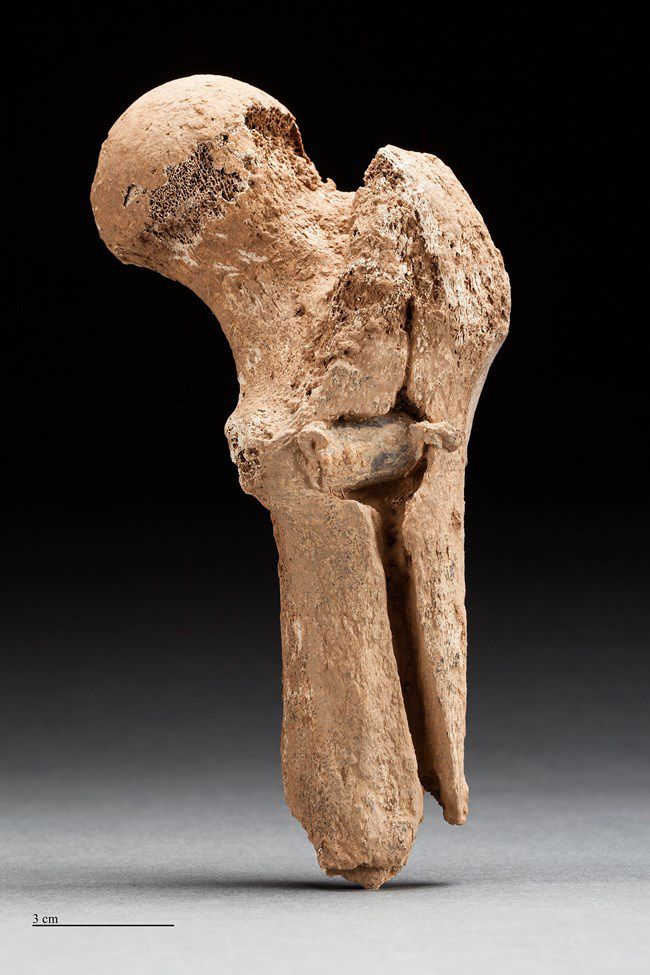 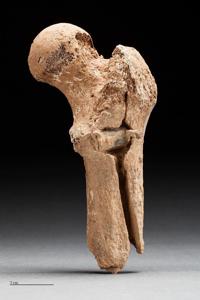 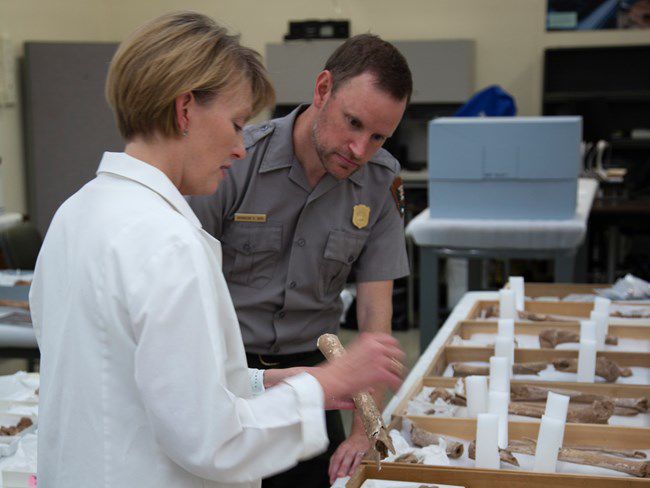 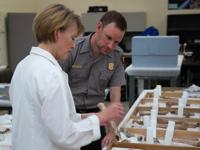 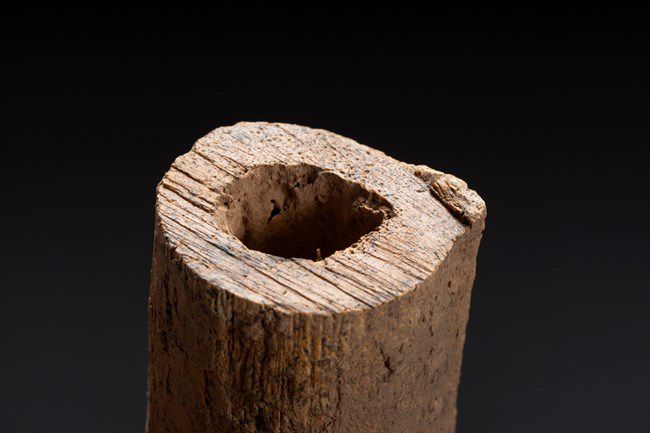 This detail photo shows the marks left by a surgeon's bone saw when the limb was amputated. Smithsonian Institution photo by Kate D. Sherwood, provided 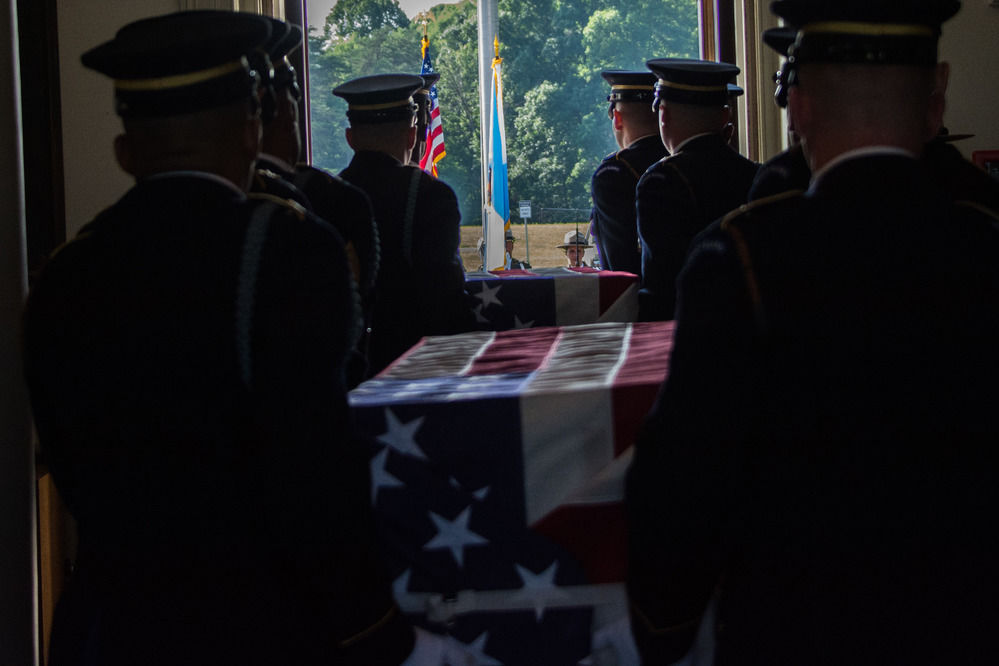 The 3rd U.S. Infantry Regiment, "The Old Guard," carries the remains of the two soldiers out of the Manassas National Battlefield Park visitor center. The remains will be interred at Arlington National Cemetery. NPS photo by Bryan Gorsira, provided

This detail photo shows the marks left by a surgeon's bone saw when the limb was amputated. Smithsonian Institution photo by Kate D. Sherwood, provided

The 3rd U.S. Infantry Regiment, "The Old Guard," carries the remains of the two soldiers out of the Manassas National Battlefield Park visitor center. The remains will be interred at Arlington National Cemetery. NPS photo by Bryan Gorsira, provided

Bones found during utility work at the Manassas National Battlefield Park led to the discovery of a battlefield surgeon’s burial pit used during the Second Battle of Manassas in 1862. This is the first time a burial pit has been excavated and studied at a Civil War battlefield, according to the National Park Service.

Bone fragments were first discovered at the site during utility work in 2014 and unearthed and collected by the archeologist assigned to monitor the work, a news release noted.

Analyzed with the help of the forensic anthropology lab at the Smithsonian Institution's National Museum of Natural History, the fragments were determined to be human and dated to the Civil War. A piece of femur bone they were able to piece together had been sawed off, consistent with an amputation.

Archeological digging at the site in 2015 unearthed two nearly-complete human skeletons and several artifacts, including buttons of a Union coat, a bullet and buckshot and an assemblage of eleven arms and legs.

Analysis of the skeletons determined one of the men died from a bullet to the upper leg and the other man suffered from a buck and ball shot. Both men were taken to the field hospital, but appear to have died without being operated on, according to the release.

“Research on the eleven limbs recovered from the surgeon's burial pit continues,” the release noted. “With help from historical records, researchers believe it may be possible to match the bones with a specific surgeon and maybe even the soldier they belonged to, a truly unique discovery.”

The remains of the two soldiers were transferred to the Army on Tuesday and they will be interred at Arlington National Cemetery in caskets made by park rangers from a fallen tree on the battlefield.

“Discovering these soldiers' remains led to valuable research that has helped us better understand what happened during the Second Battle of Manassas and of Civil War medicine,” the release noted. “Being laid to rest in Arlington National Cemetery will honor their memory and the sacrifice of so many service members throughout our nation's history.”