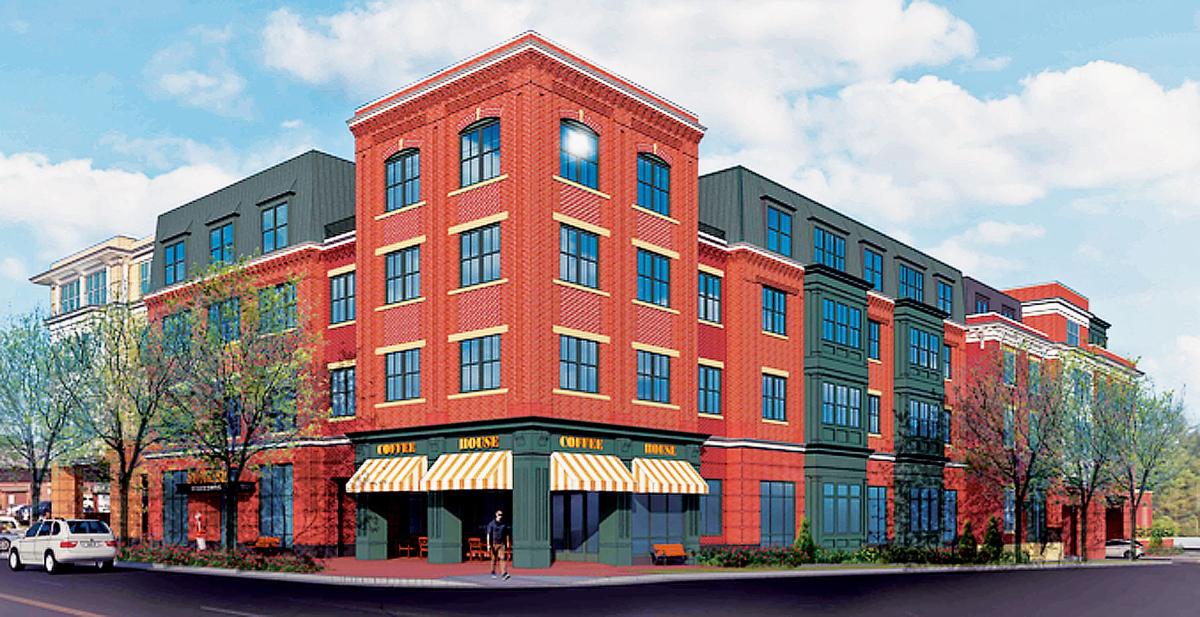 This rendering shows the proposed Sunrise of Vienna facility at 374-380 Maple Ave., W., as seen from the corner of Maple Avenue, W., and Wade Hampton Drive, S.W.

This elevation shows the proposed Sunrise of Vienna facility at 374-380 Maple Ave., W., as seen from Wade Hampton Drive, S.W.

This rendering shows the proposed Sunrise of Vienna facility at 374-380 Maple Ave., W., as seen from the corner of Maple Avenue, W., and Wade Hampton Drive, S.W.

This elevation shows the proposed Sunrise of Vienna facility at 374-380 Maple Ave., W., as seen from Wade Hampton Drive, S.W.

An approved mixed-use project with condominiums and retail instead will be redeveloped as an assisted-living facility following approval Jan. 27 by the Vienna Town Council.

The proffered-condition amendment will allow Sunrise Development Inc. to build Sunrise of Vienna, a 85-unit assisted-living facility with 120 beds and 950 square feet of restaurant or cafe space on the ground floor at 374-380 Maple Ave., W. The site will feature one level of at-grade structured parking and one below grade.

The Council voted 6-1 for the conversion, with member Nisha Patel the lone dissenter.

The vote was the latest occurrence in a long saga to redevelop the property under the town’s Maple Avenue Commercial (MAC) zoning ordinance.

The Council in June 2019 approved plans by Red Investment LLC and MJW Maple Avenue LLC to build 37 condominiums and 7,500 square feet of ground-floor retail space on the 0.85-acre parcel. The site now is home to a three-story, 23,620-square-foot office building constructed in 1970.

The developers returned last fall with the idea of converting the project into an assisted-living site.

While the previous developers agreed to limit their building’s height to 54 feet, Sunrise’s structure will have a rooftop feature at Maple Avenue and Wade Hampton Drive that rises to 56 feet. Sunrise officials said the intention is to shield rooftop mechanical equipment that has been moved as far away from neighbors as possible.

The MAC ordinance’s height limit is 54 feet, but such rooftop architectural features may reach 62 feet.

Multiple façades will make the building appear as if it has grown over time, a Sunrise official said.

Sunrise will make the building’s first floor 16.8 feet tall to accommodate delivery vehicles, which enter from Wade Hampton Drive, drop off their cargo and then pass through the building and exit on Maple Avenue. The idea is to minimize noise that reaches neighbors, Sunrise representatives said.

The building’s fourth floor will be set back an additional 20 feet from Glen Avenue, S.W., and be painted dark green to be less obtrusive.

The new development will preserve the existing curb cut on Maple Avenue, which would have been eliminated under the previously approved project. Sunrise will create an attractive, “urban-hotel-style” entrance on the Maple Avenue side, said company representative Jerry Liang.

Company officials committed to having a liaison and ongoing meetings with the public during the project’s design, development and construction.

In addition to the $79,950 contribution proffered by the previous developers for traffic-safety efforts in the vicinity, Sunrise will pay $20,000 per year for traffic-demand-management initiatives.

Sunrise will install a “pork chop” feature on Wade Hampton Drive at Maple Avenue to discourage motorists from turning left onto Maple Avenue.

Neighboring residents continued to express concern about traffic safety on Wade Hampton Drive, S.W., and Glen Avenue, S.W., which abut the property. Some Council members supported the wish of neighbors to close Wade Hampton Drive to traffic where those two streets meet, but install pop-up bollards that could be lowered to allow emergency vehicles to pass.

Residents also worried about light spillover from four proposed globe-style street lamps that would be placed on Wade Hampton Drive.

“We’d like to pretend the building isn’t there,” said neighbor Laura Bligh. “The level of light will destroy our delusions.”

The Council last June also rejected a MAC redevelopment proposed by Sunrise Development Inc. that would have built an 82-unit assisted-living facility on 0.74 acres at 100-112 Maple Ave., E. Sunrise in mid-July filed a $30 million lawsuit against the town, saying the rejection was unjustified.

Sunrise officials said the company intends to move forward with just one such facility in town, but they did not state whether the lawsuit would continue.

Shelley Ebert, who lives near the site, wondered whether the legal action was weighing on the Council.

Council member Pasha Majdi inquired whether dropping the lawsuit could be made a stipulation for approving the 374-380 Maple Ave., W., project, but Town Attorney Stephen Briglia said he did not think so. (Sunrise officials subsequently informed the Sun Gazette that the lawsuit remains on the table for now.)

The Council on a narrow 4-3 vote defeated Majdi’s proposed motion to defer decision on the case until Feb. 24.