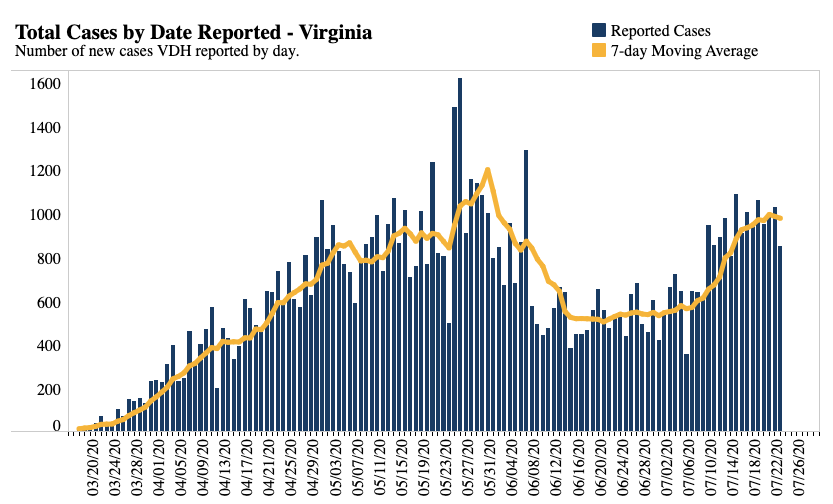 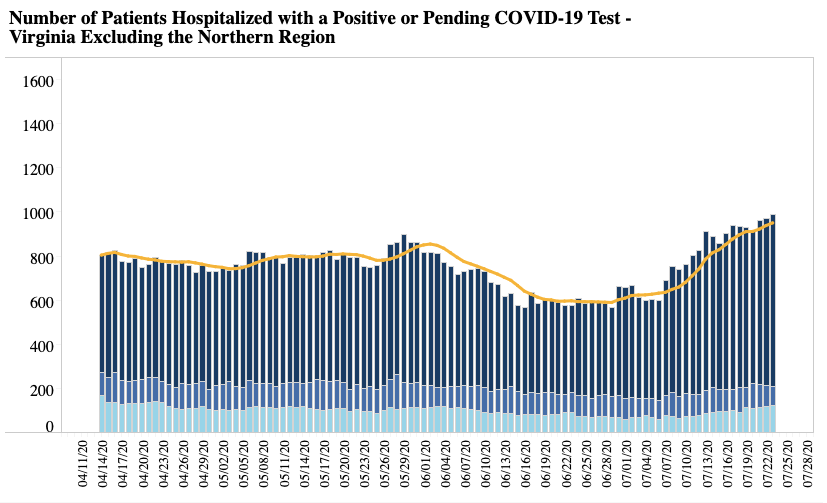 There are now 1,218 patients in Virginia hospitals, compared to a low of 783 patient July 6.

After leading the state during the early months of the pandemic, Northern Virginia's hospitalization have stayed near all-time lows for nearly a month. On Thursday, hospitals were reporting 229 patients. The high for the region was 818 reported April 30.

Meanwhile, the eastern region of the state saw record hospitalizations Thursday, with 485 patients. The central and southwest region have also seen their numbers climb this week.

The health department's COVID-19 data is updated each morning by 10 a.m. and includes reports by local health agencies before 5 p.m. the previous day.

*Provided by Virginia Department of Health

HEALTH: Summer fun in the age of COVID-19

The nationwide surge in COVID-19 testing is leading to an increasing turnaround time for results across Virginia and in Prince William County.

Out of curiosity, I compared deaths of all causes in Virginia in 2020 with 2019. I only looked at 18 weeks from March 1 to June 30. According to CDC statistics, 25,288 people died in Virginia during this period in 2020 compared to 24,192 people dying during the same period in 2019. That is about 4.3% more deaths in 2020 than 2019, or 1,036 more people. Since a few over 2,000 deaths have been linked to COVID-19, it is clear that probably half of these people would have died even if they didn't have COVID-19. It is a bad virus, but its seriousness has purposely been blown out of proportion by media and dishonest politicians. The vast majority of deaths are older people that can bee protected. Schools need to reopen with masks and social distancing in place.

Kathie Lee Gifford: My quest for love has been unsuccessful