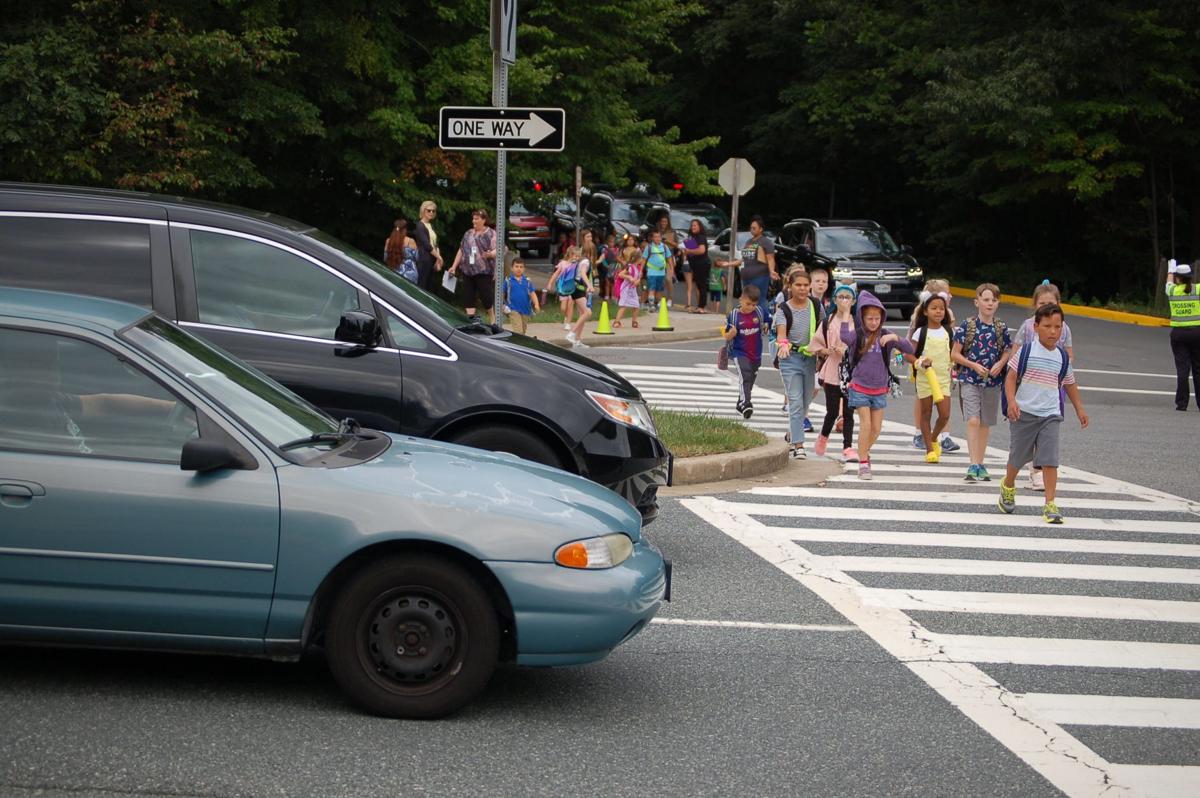 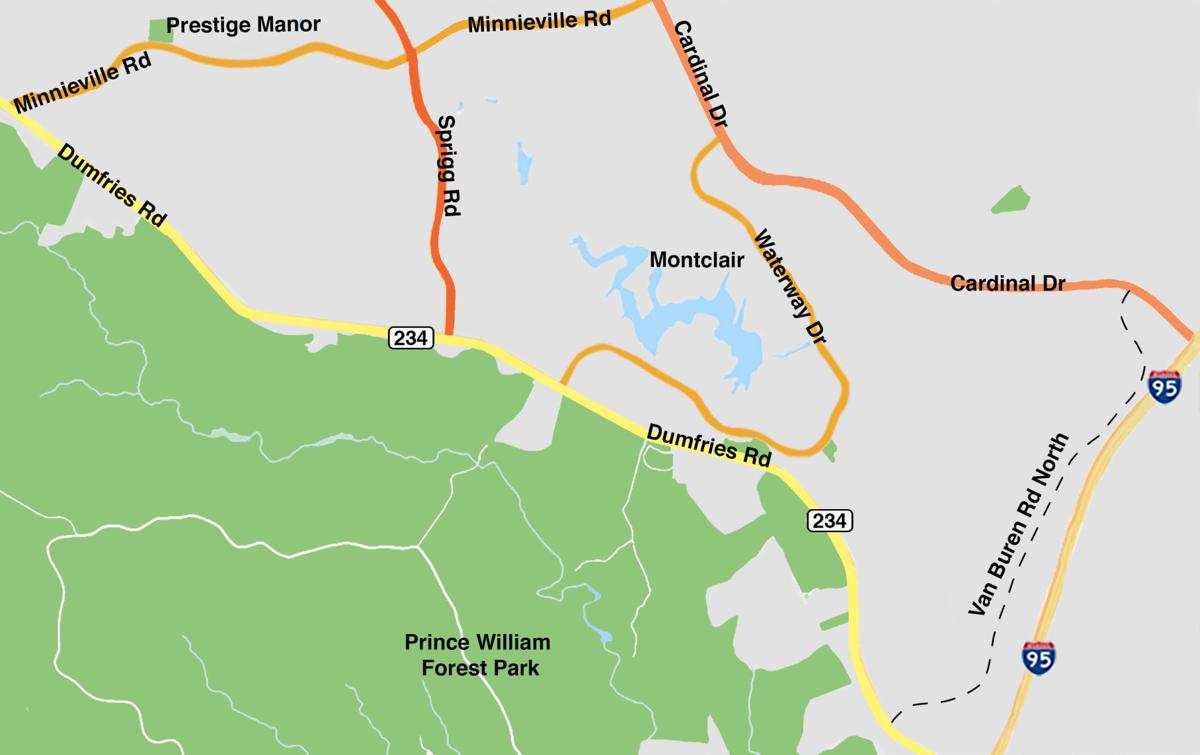 There are only a few routes between Dale City and Dumfries Road, and one of the more popular detours takes traffic down Waterway Drive.

A fire truck on Waterway Drive in Montclair had its lights and siren on around 7 p.m. on Saturday, Aug. 17, when it swerved to miss a car that had abruptly stopped ahead of it. No cars were hit, but the fire truck flipped on its side.

Four firefighters were taken to the hospital with minor injuries and a resident’s fence was damaged, said Sgt. Jonathan Perok, the county police department’s spokesman.

That is just one of many wrecks on busy Waterway, which serves as part of a cut-through for drivers trying to avoid Interstate 95. One proposed solution would be a new road parallel to I-95, but that plan has split two communities nearby.

While Montclair residents wanted the Van Buren Road extension to make their community safer, residents of nearby Four Seasons lobbied to have the project sidelined over concerns that included preserving their wooded vista.

Right now, there are few options for routes between Dumfries Road and Cardinal Drive and Dale City. Drivers can choose Spriggs or Minnieville roads. But, if they’re coming from the I-95 corridor, many drivers will try to pass through Montclair on winding Waterway Drive, passing two schools.

There are only a few routes between Dale City and Dumfries Road, and one of the more popular detours takes traffic down Waterway Drive.

Montclair resident Heather Page said Waterway is handling an unfair amount of traffic due to commuters using it as a cut-through between Cardinal Drive and Dumfries Road.

“We’ve had plenty of accidents,” Page said. “We will just no longer stand for it as a community.”

Page said the high volume of traffic in a residential neighborhood is dangerous for kids walking to and from school, the pool or other activities.

“We just have way too much traffic,” she said. “We have more traffic than we can handle with southbound traffic at rush hour. The Van Buren Road extension would ease up the traffic in a nonresidential area.”

On Nov. 5, Prince William County residents will vote on whether to allow the county to borrow about $400 million for road and parks projects. On June 25, the Board of County Supervisors removed several projects and increased the proposed funding for a Va. 28 bypass or widening from $100 million to $200 million. At the same time, the road bond proposal was reduced from $400 million to $355 million and the parks bond from $200 million to $41 million.

One of the road projects that was cut was a $70 million project that would extend Van Buren Road 2.7 miles as a four-lane road with pedestrian and bike accommodations from Dumfries Road to Cardinal Drive.

Currently, Van Buren Road runs parallel to I-95 south of Dumfries Road, and a roughly half-mile section exists near Cardinal Drive. The extension would connect the two pieces of Van Buren Road to provide an alternative route to I-95 or U.S. 1. It would require four to six years to complete, according to county staff.

At a public hearing on the bond referendum May 21, dozens of Four Seasons residents said they did not support the Van Buren Road extension project, because it would remove trees that act as a buffer between the neighborhood and I-95 and disrupt the community’s walking trail. The community has about 801 homes and 1,400 residents. A Montclair resident said at the public hearing she supported the project because it would help alleviate traffic.

Supervisor Maureen Caddigan, R-Potomac, whose district includes the Van Buren Road extension, said on June 25 she lives in Four Seasons and agrees with those residents that the project should not be in the road bond referendum. She, along with Supervisors Frank Principi, D-Woodbridge, and Pete Candland, R-Gainesville, voted against placing the road bond on the ballot. Caddigan did not return requests for an interview about the topic.

During the board’s meeting Aug. 6, Page and other Montclair residents spoke during citizen’s time to express their support for the Van Buren Road extension.

Page started an online petition on change.org and received 292 signatures as of Tuesday in support of the extension. Montclair residents also started a Facebook page called Van Buren Now.

Montclair resident Tracy Hansen said crossing Waterway Drive can be dangerous when one car stops at a crosswalk, but other cars go around the stopped car.

“If they’re in the crosswalk, you must yield to them. Who wants to push their luck?” Hansen said.

Hansen said after the new board takes office Jan. 1, she and others in Montclair will continue to push for the road extension.

Montclair resident Linda Cheng said her 12-year-old son rides his bike with his other swim team members to the local pool.

“It’s still part of the plan,” Cheng said. “What’s the hold-up? We all know it needs to be built.” The developer of Four Seasons dedicated a 128-foot easement to the county to extend Van Buren Road through the property, according to a September 2006 memo from the county’s planning department to the board of supervisors.

Jim O’Malley, president of the board of directors for Four Seasons, said the community is pleased that the road extension is not on the road bond referendum this year.

In addition to losing its sound and sight barrier between I-95 and Four Seasons, O’Malley said, the community is also concerned about 18-wheeler truck traffic on the proposed Van Buren Road extension, as well as security in the community.

O’Malley said he might support the road extension if the county increased the buffer between the road and Four Seasons.

“If I was in Montclair, I would have the same concerns,” O’Malley said. “Our interests are not the same. In our case, we’d be the ones most impacted by the development, loss of trees, so we’d be losing a buffer and barrier that some residents paid extra for when they bought their lots.”

Caddigan is not seeking re-election in November. Democrat Andrea Bailey and Republican Doug Taggart are running to serve as Potomac District Supervisor. Both Bailey and Taggart held informal meetings this month to listen to Potomac District residents about the extension.

“Both communities need to have a voice and be able to voice their concerns,” Bailey said. “What will it take to alleviate traffic, but also respect Montclair?”

Bailey said she has started doing her homework by meeting with residents and others, and if elected, she would work with residents, county officials and the Virginia Department of Transportation to make an informed decision regarding the extension.

Taggart said he thinks the project will be built sometime in the future and would like to help mitigate concerns by anyone in the community. He said he doesn’t want Montclair to be pitted against Four Seasons.

“I think there is tremendous power in everybody working together,” Taggart said. “I’m hesitant to say we can get it [started] in a year, but we gotta move forward.”

Taggart said although the county needs to invest in its infrastructure, the two bond questions were rushed through.

“I will vote for the bonds, because we need to invest,” he said. “It’s unfortunate Van Buren got removed, but we can make it happen and mitigate the concerns. We do need to get everyone engaged; that’s how we conduct business.”

It doesn't make sense that people throughout the are should be held hostage to traffic congestion because a few people in Four Seasons don't want to see a road out their back windows. Even so, easy enough to put a screen of trees on the west side of the new road to address the concern. This is not a sufficient reason to prevent such the Van Buren Rd extension project.

Seems like the desires of a particular county supervisor are more important than the needs of the community.

The Van Buren Road extension would be ok if it was moved closer to I95.