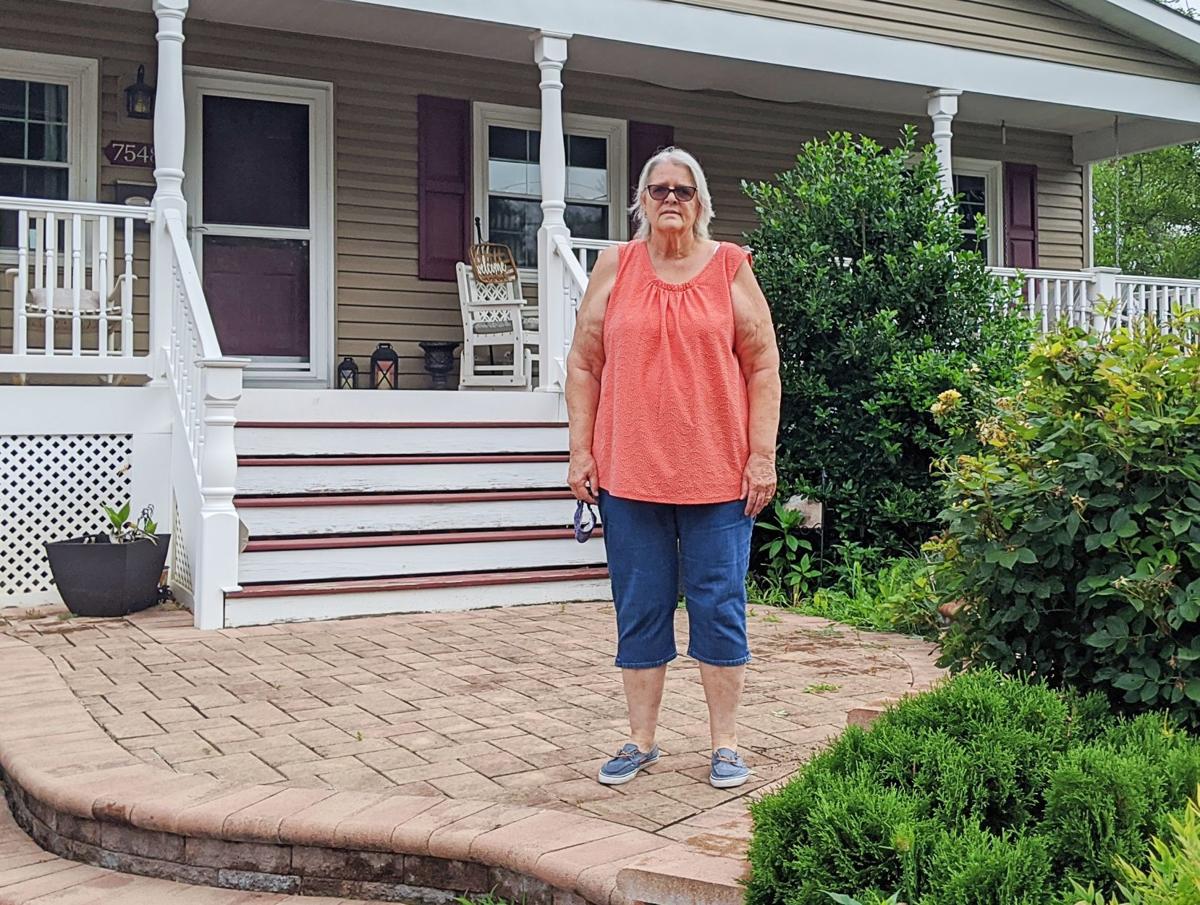 After making $60,000 in improvements to the front of her property, Sharron Jones was told by the county that her home could be in the path of the planned Va. Route 28 bypass. 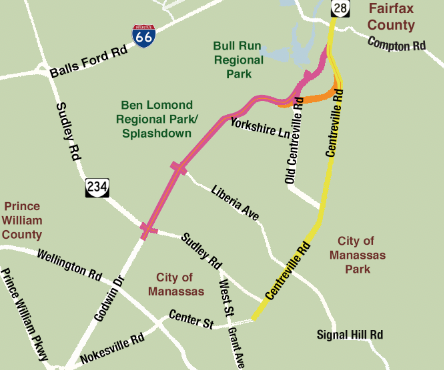 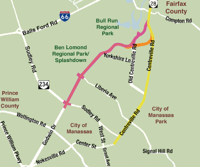 The Route 28 bypass (pink line) would run northeastward from the intersection of Godwin Drive and Sudley Road in Prince William County and connect with existing Route 28 just inside Fairfax County.

In a neighborhood west of Va. Route 28 and near SplashDown Waterpark, Sharron Jones and her husband spent $60,000 on improvements to the outside of their home a few years ago, adding a porch, patio and new landscaping and upgrading the roof, windows and siding.

“We wanted a porch all those years, and five to six years later [after we built it] we got the letter,” Jones told InsideNoVa on Monday.

In the letter, received about two years ago, the couple learned that their house was among those that Prince William County could purchase under eminent domain to build a $300 million four-lane road to serve as a Route 28 bypass. By extending Godwin Drive north of Sudley Road, the project aims to alleviate traffic on the busy commuter route, but Jones and nearly 35 other families would be forced to move.

“This was the house,” Jones said. “We were going to stay here for the rest of our lives.”

The Prince William Board of County Supervisors will hold a public hearing July 14 on the proposal to move ahead with the bypass, instead of widening Route 28.

Ric Canizales, the county's transportation director, told InsideNoVa the bypass option could affect 70 homes; half or more of those houses would need to be purchased completely, while the other homeowners would see partial impacts.

County staff endorsed the bypass route because a different proposed route would have affected up to 112 homes, an apartment complex and a trailer park, Canizales said.

Widening Route 28 would affect 90 properties that include 154 businesses, Canizales said. The cost to buy rights-of-way from those businesses make the widening option too expensive. “Widening 28 has become a non-option.”

Jones and her husband have lived in their home more than three decades.

“I have no mortgage and I’m in my 70s.  I cried all weekend,” she said after learning her house could be needed to build a road.

Jones said she’s been looking at another home in the area because she wants to be near her grandchildren. She wonders whether the county’s fair-market value offer — whatever that may be — will be enough for her to find a new home nearby.

Another homeowner who would be affected, Carol Blaser, has been advocating against the Route 28 bypass extension because of the need to use eminent domain. She owns a house with her two brothers.

“Our parents paid off the house and left it to us,” she said. “We’re back to a nervous wreck. We cry. It’s something our parents left us, to see it destroyed.”

County voters approved a road bond referendum in November that included $200 million for either a bypass or widening Route 28. The board of supervisors will vote in July whether to authorize spending the first $89 million for the project.

The county won’t know exactly which homes will be purchased until 2023, after design work is completed, Canizales said. Construction is estimated to take two to three years, meaning the road won’t open until at least 2027.

The county will conduct independent appraisals of properties once staff knows which properties will be affected, Canizales said. The appraiser’s estimated value of the home will be sent to the homeowners.

Under the eminent domain process, homeowners who disagree with the county’s proposed fair-market value can challenge the value in court.

“It’s a very individualized process where we negotiate with property owners and make sure at the end of the day everyone is happy,” Canizales said. “It is very rare that we end up in court, especially for a residential case.”

The Prince William Board of County Supervisors is delaying a decision on the preferred route for the $300 million Va. Route 28 bypass.

Somebody should look into property sales along or near the route by close cronies of the powers that be. Inside information can be worth $millions. But now that the route is somewhat known, residential property values will likely tumble meaning Mrs. Jone's property can be bought by the tax payers at a bargain price.

The proposed Rte 28 Bypass is seriously misguided. By diverting I-66-bound traffic from the PW Pkwy and Sudley Rd, it wouldn't sustainably reduce traffic congestion and would substantially worsen it north of the Bypass on Day 1 along Centreville Rd in Fairfax County. It would also fuel new residential suburban sprawl development in southwestern Prince William County and the rural counties to its west, while providing no effective alternatives to drive-alone commuting, such as freeway-speed bus service and carpooling.

Sadly, the 2017 Route 28 Corridor Feasibility Study failed to examine the alternative of building a new southbound-only road through Yorkshire about one block west of the existing Centreville Rd (greatly reducing any impacts on existing businesses) and operating the two roadways as north-south one-way pairs with dedicated bus lanes and synchronized traffic signals. That alternative should be fully and fairly examined NOW before moving ahead with the Bypass.

Why is PWC staff asking the BOCS to proceed with the design and construction of this Bypass when the County's federal Environmental Assessment study, initiated 18 months ago, remains undisclosed and incomplete? What will happen if the U.S. Army Corps of Engineers denies the County's application to construct the Bypass through sensitive and flood-prone wetlands?

The BOCS should not approve moving forward with this Bypass until the federal Environmental Assessment study has been successfully completed.

This is very sad for these homeowners. Rte. 28 widened would solve nothing, only accommodating more people sitting in lanes. The back-up begins way back in Fairfax and Loudoun.

I feel for the homeowners, hope this misguided plan does not go through.

Its ashame petculent children like Danica Roem will never understand what it is like working your whole life to have some political hack take it away. What a disservice to tax paying citizens. Meanwhile shady car dealers and Ms-13 clubs are spared. The 28 corridor is what needs fixed. Relocate the title loan shop not 70 families. It's all politics poor people suffer at the hands of lunatics.

Jennifer Garner on relationships: They can be a self-fulfilling prophecy