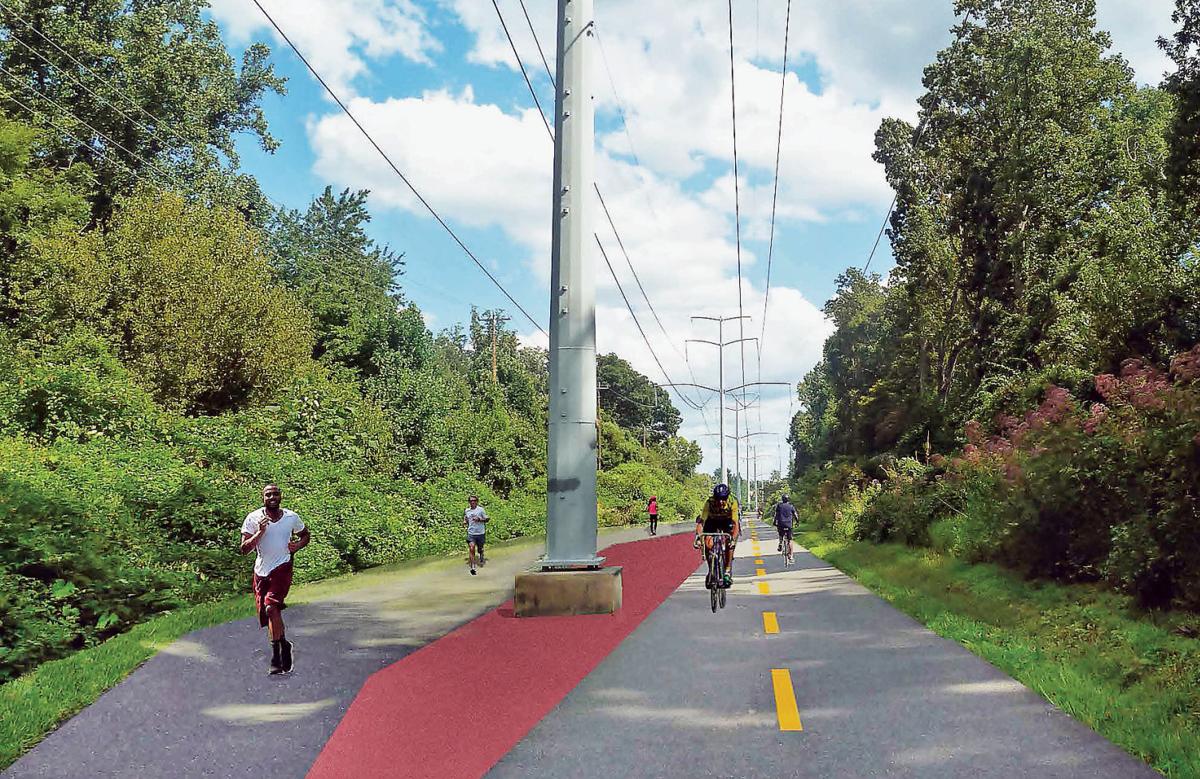 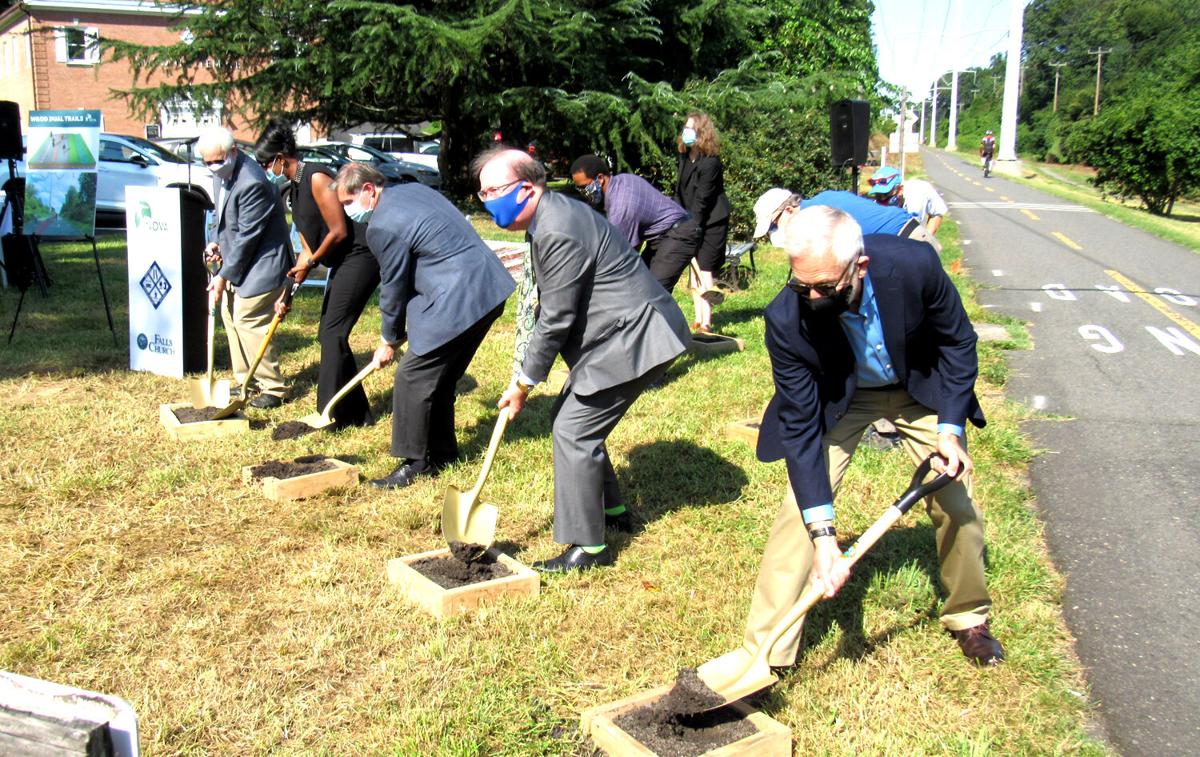 In a preview of what could be to come in other corridors where the Washington & Old Dominion (W&OD) Regional Trail snakes through urban communities, officials on Aug. 26 broke ground for a 1.5-mile upgrade to the trail in the city of Falls Church.

The effort, expected to be completed next summer, represents “the most visionary development on the W&OD in a generation,” said Michael Nardolilli, an Arlington representative to, and chair of, the board of the Northern Virginia Regional Park Authority (NOVA Parks), which operates the 45-mile linear park.

The $3.2 million project will replace the current single-use trail with separate segments: an 8-foot-wide pedestrian path and an 11-foot-wide cycling path, with a 2-foot median in between.

The result, officials hope, will be easing congestion on the popular trail, and making it a more viable tool for those who wish to commute by bicycle.

“This is why we exist, for projects like this,” said Monica Backmon, executive director of the Northern Virginia Transportation Authority (NVTA), which awarded funding for the project.

“There is no one-size-fits-all solution” to breaking transportation gridlock, said Backmon, ticking off a list of creative efforts currently under way across Northern Virginia. “It takes all of that to keep this region moving.”

NOVA Parks has been working with the city of Falls Church since 2016 on planning.

Paul Baldino, treasurer of the city of Falls Church and a NOVA Parks board member, said the project in his city would be “a model to be replicated on other urban sectors” of the W&OD Trail, and is an appropriate place to start, as the Falls Church segment in 1974 was the first portion of the former railroad bed to be converted to trail use.

NOVA Parks aims to use the Falls Church segment as a road map for future conversion of segments of the W&OD Trail to dual use, starting with a segment in Arlington. That project has received NVTA planning funds, but the park agency’s request for construction funds was effectively vetoed, for now, by Arlington officials, seeking more information on the specifics before moving forward.

Paul Gilbert, executive director of NOVA Parks, said he believes that once the public sees how the dual-use trail smoothes traffic flow on the sometimes crowded existing trail, momentum will grow to proceed with the Arlington portion.

“Once this is built, this is a game-changer,” he said of the Falls Church segment. “All trail users will want this.”

And if Arlington elected officials are being a little skittish, there is no such nervousness from Falls Church officials in being first in line for the upgrade.

The Falls Church project (and the planned Arlington one) also will include stormwater-management efforts.

The W&OD Regional Trail runs for 45 miles from Shirlington west into Loudoun County, occupying the roadbed used from the 1850s to 1968 by the Washington & Old Dominion Railroad and its predecessors.

Initially 6 feet wide, the trail has been expanded to 10 feet or more. The dual-use segment in Falls Church will feed over a new bridge crossing Route 29, which is being built as part of the project to expand Interstate 66 inside the Beltway

If the construction schedule holds up, park officials expect the Falls Church dual-use project to be completed next June, and are anticipating a large celebratory event in what they hope will be a post-pandemic world.

Pandemic has boosted use of W&OD Regional Trail

Whatever the preference for use – running, walking, biking,  riding scooters, maybe even roller skating – the popular 45-mile Washington &…

"That [Arlington] project has received NVTA planning funds, but the park agency’s request for construction funds was effectively vetoed, for now, by Arlington officials, seeking more information on the specifics before moving forward."

What evidence does the reporter have that Arlington officials "vetoed" any of funding. The County Board was unanimous in endorsing the full funding. It is my understanding that the recommendation for only partial funding originated with NVTA staff after they reviewed the many detailed and informed public comments opposing this project, in part for its lack of public involvement to date.

As Scott McCaffrey is well aware the reason the Arlington Board of Supervisors hasn't gone along with the trail widening is because significant environmental damage that would occur and trail widening is unnecessary.

McCaffrey also repeatedly fails to report that Arlington Board of Supervisors Chair Libby Garvey sponsors group bicycle rides on the W & OD and serves on the board of a bicycle advocacy group that wants the trail widened in Arlington.

[rolleyes]Hundreds of mature trees will be destroyed and thousands more cubic feet of stormwater generated from thunderstorms that produce 1 inch of rain to provide what will actually be a high speed and a low speed bicycle lane which will be used almost completely for recreation because new residential mixed-use infill redevelopment in FC has ZERO usable open space. Big gimme to in-fill developers and to the chamber of commerce booster local media who advertise new 2-bedroom 2-bath condos in FC that list for $530,000 and are completely unaffordable to the middle class never mind the workforce.

Brody Jenner: It was hurtful to not be told about Kaitlynn Carter's pregnancy sooner

Matt Amodio Becomes One of ‘Jeopardy!’s Biggest Winners Ever