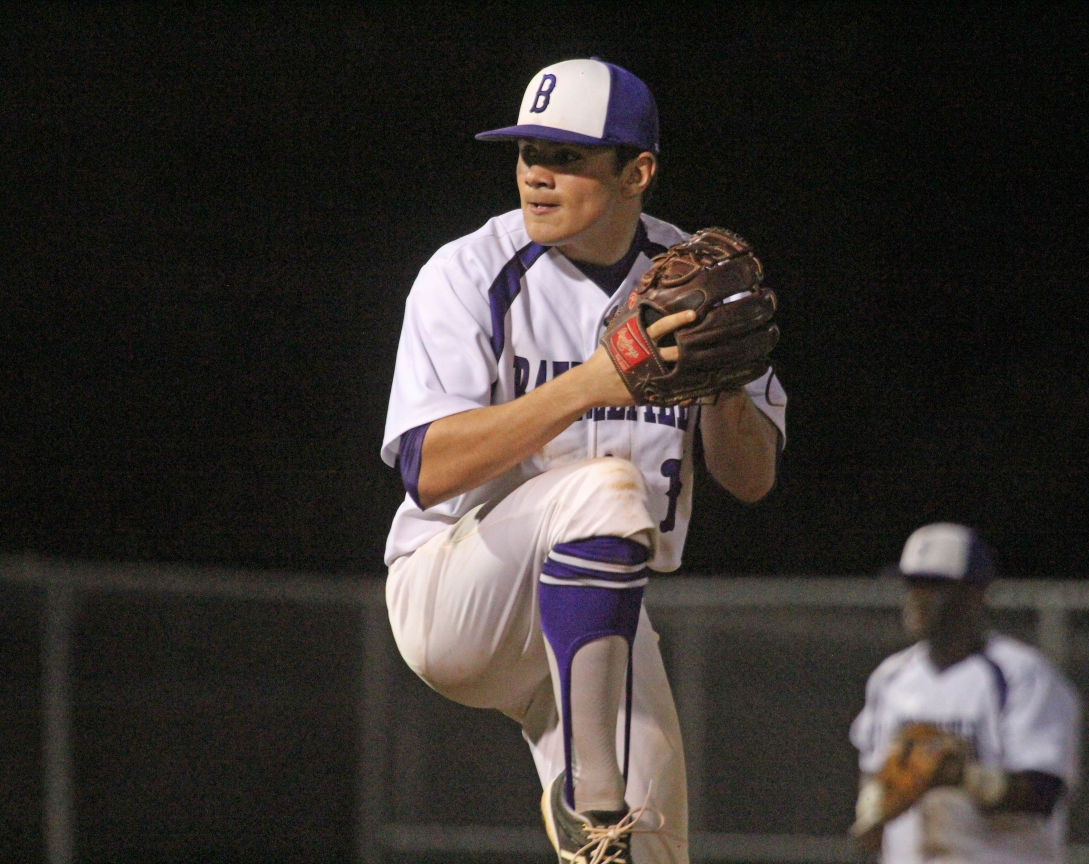 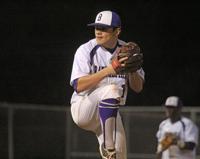 Battlefied's Jake Agnos in the midst of a no hitter against Hylton on Tuesday, March 15, 2016. 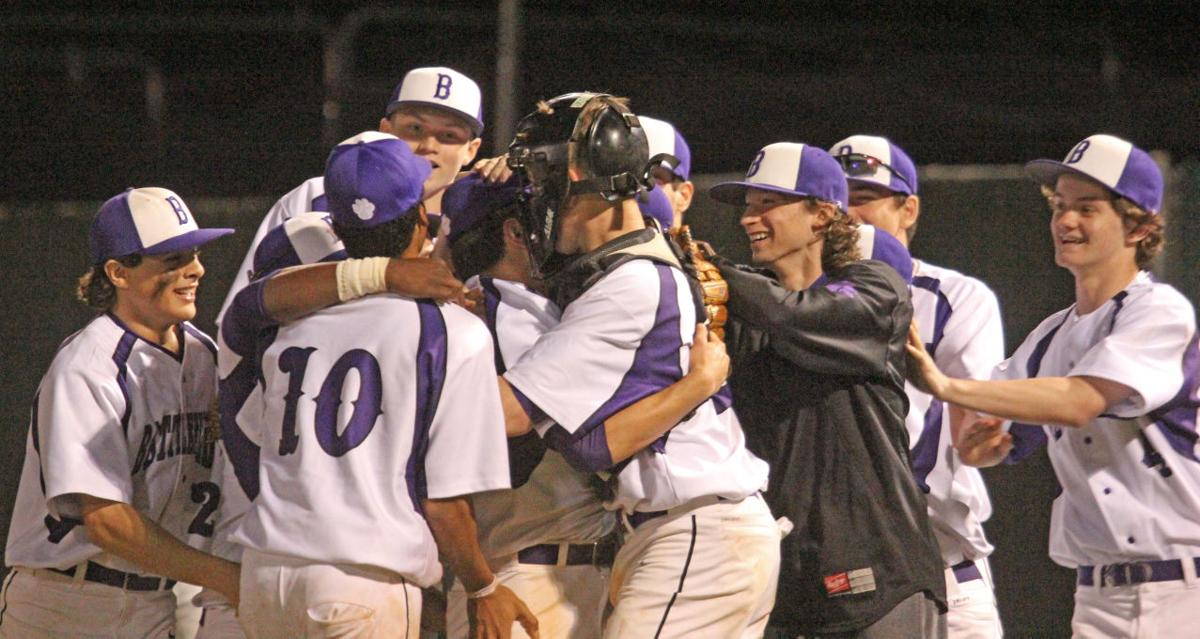 Battlefield starter Jake Agnos is mobbed by his teammates after tossing a no-no against Hylton on Tuesday, March 15, 2016.

Battlefied's Jake Agnos in the midst of a no hitter against Hylton on Tuesday, March 15, 2016.

Battlefield starter Jake Agnos is mobbed by his teammates after tossing a no-no against Hylton on Tuesday, March 15, 2016.

First the immaculate game (striking out every batter) went out the window. Then it was the perfect game opportunity. Ultimately, the shutout chance also went by the boards.

But in Battlefield’s season opener Tuesday, with at least seven major league scouts pointing radar guns at every pitch and charting his every move, Bobcats’ starter Jake Agnos completed his date with destiny by throwing his first high school seven-inning no-hitter to lead Battlefield to an 8-1 non-conference victory over visiting Hylton.

Aside from a brief sixth inning blip when he may have tired a bit, Agnos was in complete control, virtually from start to finish. He struck out 17 batters in all, including the first six and seven of the first nine batters of the game. In facing 24 batters (just three over the minimum), he allowed just one ball to leave the infield—a soft line drive to left by Hylton shortstop Fox Semones with two outs in the fourth.

Agnos notched just four outs that were not by strikeout—Semones’ flyout, a third inning grounder to second by Hylton starting pitcher Trey Shepard, a comebacker in the third inning by Colin Verberg, and a grounder to short to lead off the seventh by catcher Richard Ortiz.

Pitching amidst an optimistic crowd, including a Milwaukee Brewers scout who handed out business cards to fans, Agnos caught three batters looking on strikes and got several to chase pitches that moved high and away, low and outside, and everywhere in between. Except for a sixth inning that included two walks, a hit batsman, and a wild pitch which ultimately brought in Verberg with Hylton’s lone run, Agnos was an artist, unleashing a dazzling assortment of pitches that twice prompted Hylton batters two slam their bats in frustration.

For his part, Agnos said he was not disappointed at losing the shutout, and his joy at getting the no-hitter was apparent.

“There’s always something you can improve upon, especially as the season goes along,” said Agnos, an East Carolina University signee who went 7-0 with a 0.65 ERA, 129 strikeouts and 43 walks in 64.1 innings last season. “You think about it, [tell yourself] ‘don’t do it again. But looking back I wouldn’t change a thing. Would I throw a fastball [instead of a changeup that got away for a run-scoring wild pitch], probably yes, but this is my second no-hitter in high school and my first was only a six-inning no-hitter and I got a lot of crap for that from my teammates that you didn’t finish the deal. Tonight I did.”

Interestingly, that may have been one of the reasons why Battlefield coach Jay Burkhart decided to leave Agnos in to pitch the seventh despite a pitch count that was nearing 100 pitches and the fact it was early in the season.

“I did [think about taking Agnos out], especially in the sixth when things got away from him a little bit,” Burkhart said. “But Jake was in mid-season form, even late-season form, and his teammates and he wanted him to have the chance to see it through.”

Burkhart was quick to point out the talent of Hylton, which has a total of five players who will play college baseball, including two at the Division 1 level.

“That’s a good team with a lot of talent over there,” Burkhart said.

Agnos said he did not get deflated, but found a second wind, after he issued the walk to Verberg that dashed his perfect game hopes and led to the Bulldogs’ lone run.

“After I walked him, I heard their fans cheer,” Agnos said. “I figured if they were cheering a walk, I must be doing something right.”

The heart of Battlefield’s order (batters 3, 4, and 5 in the batting lineup) went a combined 4 for 8 with five runs scored. Burkhart said a key to the victory was the Bobcats’ plate approach.

“Their first pitcher Shep [Trey Shepard] made a lot of pitches and he couldn’t get [out of the second inning]. It was a good night from our lineup 1 through 9,” Burkhart said.

Harju said it is easier to hit with a pitcher like Agnos on the mound.

“When Jake pitches, you can relax and just do your job,” Harju said. “That makes it easier on everyone.”

Battlefield, with its five Division 1 college players began its season in nearly perfect fashion, just like its ace pitcher, who fashioned a dominant gem.

“My approach was the same the whole game,” Agnos said. “When I get on the mound, I am zoned in. There’s not a lot on my mind. When I gave up a walk, or threw the wild pitch, I just had to flush it and move on and focus on getting the next batter. I knew about the no-hitter. No one mentioned it, but I knew it was out there. But I just kept thinking about getting the next batter. That was my only focus.”

hmmmm..........lotta pitch's first time out. Especially with an 8 run lead. Kid seems to have a bright future. Coach should look after him better

Maya Jama to launch her own range of alcoholic drinks