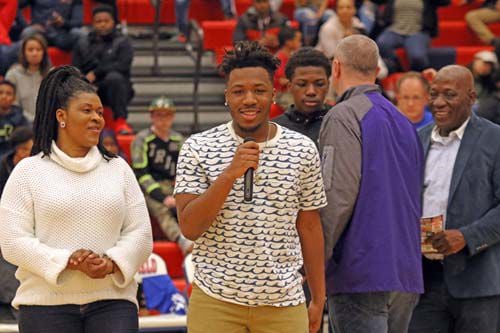 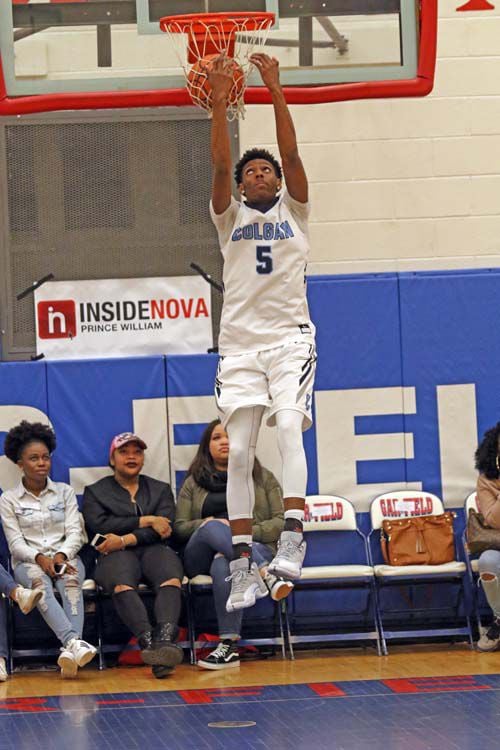 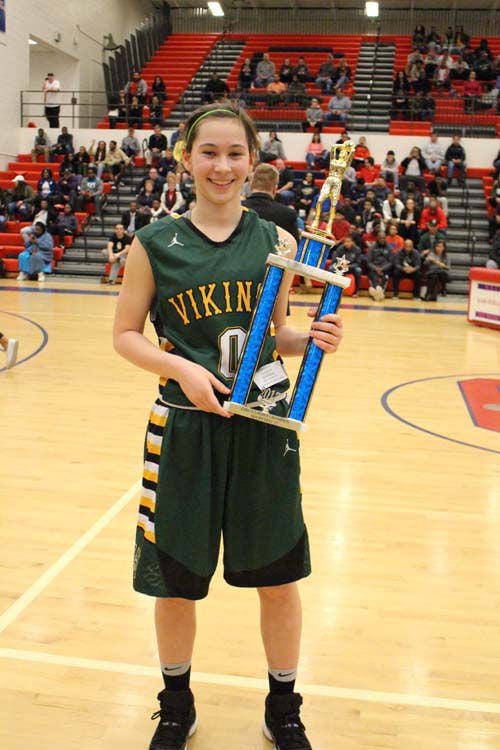 Some parents will do anything for their children, but risking life and limb by allowing your child to execute a slam dunk over your head?

That extreme measure by his mother Makeitha played a key role in helping Colgan’s Kaeleb Carter take home the slam dunk trophy Wednesday at Hoops Fest 22 at Gar-Field High School. The charity event, sponsored by InsideNoVa.com and Battlefield Ford, raised $4,300 to help defray the medical expenses of Battlefield’s Kojo Bonsu, who received a heart transplant this past December.

In the first round of the slam dunk competition, Carter, who went second behind Battlefield’s Julian Washington, used his mother as a hurdle, leaping over her head to throw down the most exciting and creative dunk of the night, an effort for which he garnered a perfect 10 from each of the four judges, a rousing ovation from the crowd, and the admiration of his fellow competitors most of whom stood up while capturing video of the dunk on their cell phones.

While most competitors in the slam dunk competitions of years past have saved most of their creative dunks for the finals, Carter said he knew he needed to make an early statement.

“I knew I was second so I had to do something big,” Carter said. “[I had practiced that dunk before but] not over my mother.”

Carter added he was not worried about possibly injuring his mother if he missed the dunk or mistimed his leap.

“I trust myself and know what I can do,” Carter said. “It feels very good to win this for Colgan with us being a new school.”

In the finals, Carter executed another creative dunk taking a pass from Potomac’s Devon McDonald, who was positioned behind the backboard, then throwing down a reverse tomahawk dunk that also netted four 10s.

The dunk competition capped off a festive evening, full of interesting storylines and thrills.

Woodbridge’s Hanna Oliver became the first three-time Hoops Fest winner after winning the 3-point shootout, outlasting an electrifying first-round by Hylton freshman Josie Rodas, who sank four “money balls” en route to scoring a 17. Perhaps the heroics took a toll on Rodas as she missed her first four shots of the final round. Meanwhile, Oliver remained consistent, scoring 11 points in both rounds.

Oliver shot first in the final round and struggled from the right baseline, missing all five shots, but she heated up from the right corner, making three of the five, then making four from the left corner, including the money ball that was worth two points. Oliver admitted she wasn’t very confident with her total of 11 and Rodas waiting to shoot again.

“After [Rodas had] 17 in the first round? Of course not, but it worked out,” said Oliver, who also won the 3-point titles as a freshman and sophomore.

Oliver adopted an interesting strategy during the 3-point competition. While most of the contestants started with the rack adjacent to the Indians’ logo near the left baseline, Oliver insisted on starting from the rack near the opposite baseline.

“I’m left-handed so it’s just more natural and that way I’m not [shooting from] behind the basket,” Oliver said, adding it was “pretty cool” to be the first three-time champion. “I felt good on the second rack [during the finals] and in the wing spots, but I kind of struggled in the corner, though.”

For her part, Rodas, a freshman who trains with Dennis Marshall, father of former NBA player Kendall Marshall, several times a week to work on three-point shooting, said it was exciting to compete at Hoops Fest for the first time.

“I kind of didn’t know what to expect,” Rodas said. “After the first round, I felt good, but I felt kind of rushed during the finals. I wanted to win and maybe I got a little nervous. But it was a good experience and really fun to do so well in the first round.”

The boys’ three-point event was very competitive, with Woodbridge’s Imrie Worley notching 16 and Freedom’s Dominic Braswell, Hylton’s Braelon Canada, and Christ Chapel’s Jordan White each tallying 15 in the first round.

During a three-way shoot-off to determine who would go to the finals, Braswell got hot making 4 of 5, including the money ball, on the first rack, then later making five shots in a row en route to notching a score of 19. In the finals, Worley shot first and missed his first five shots, but then rallied by draining each ball from near the top of the key and finishing with 11.

Braswell, meanwhile, made 2 of his first 5 shots before going cold. Braswell won the competition by sinking 3 of 5 shots, including the money ball on the last rack, while finishing with a score of 14.

Braswell, who estimated he had taken about 1,000 shots in preparation for Hoops Fest, said he had a simple formula for winning the three-point competition.

“Stay focused, tune out the crowd, and get into a good rhythm,” Braswell said. “In the first round, I went kind of fast, so I had to pace myself in the second round and then in the finals, and you saw the outcome.”

Unlike Braswell, Battlefield’s Brayden Gault and Danielle Harrington, who won the two-ball competition, said they had no time to prepare and had not played together before.

During the first round, in which they shot last out of 14 duos, Gault and Harrington missed several shots, especially early while scoring 50 behind Freedom’s Elizabeth Gladden and James West’s total of 57. But moments after qualifying for the finals, the pair found their rhythm, making their first six shots and earning the 10-point bonus for making a shot from every position on the court while notching a score of 81.

Gault, who won the two-ball title last year with Taylor Baltimore, said shooting shortly after completing the first round helped them do well.

“I definitely think shooting first was an advantage because we were warm,” Gault said. “We had a plan going into the finals for her [Harrington] to shoot the three low shots and for me to shoot the three outside shots. Then we alternated from two to three and kept rotating.”

Harrington said they were able to execute the plan well and find their rhythm in the finals.

“We just wanted to keep it going [once they got hot],” Harrington said. “By rotating shots, it was easy to do that.”

Gault said the minute the team had to shoot seemed to go by a lot quicker in the finals.

“It’s a lot better when you’re making them. It was really fun,” Gault said.