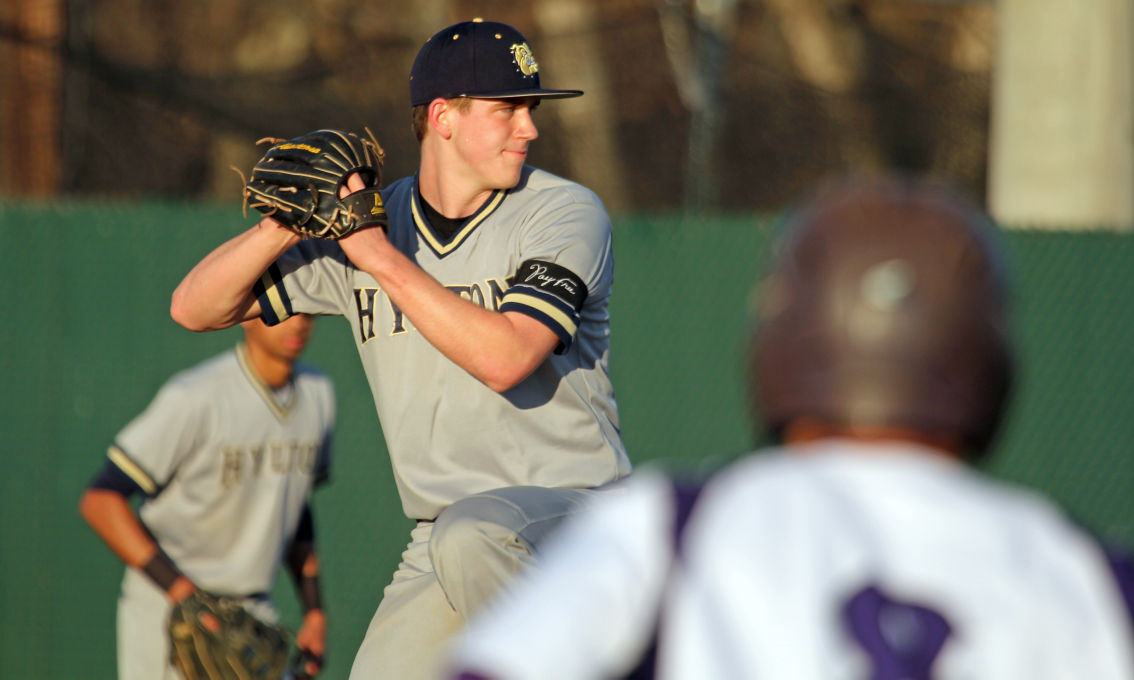 Hylton starter Trey Shepard pitches March 15, 2016 at Battlefield. Shepard wore an armband on his left arm that night in honor of his girlfriend Payton Freeze, a Battlefield HS senior who committed suicide Feb. 10. The armband's two words, Pay Free, parts of Payton’s first and last name, are Payton’s signature from a letter she wrote Shepard. 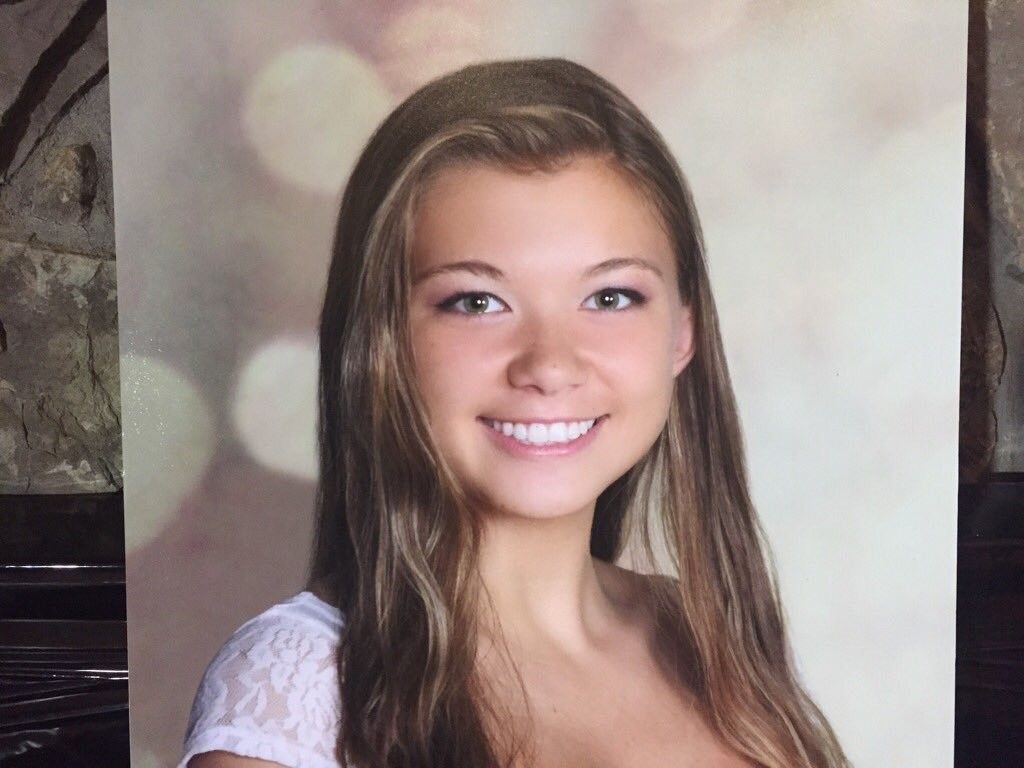 Hylton starter Trey Shepard pitches March 15, 2016 at Battlefield. Shepard wore an armband on his left arm that night in honor of his girlfriend Payton Freeze, a Battlefield HS senior who committed suicide Feb. 10. The armband's two words, Pay Free, parts of Payton’s first and last name, are Payton’s signature from a letter she wrote Shepard.

Trey Shepard’s mind wandered as he walked to the mound for his first start of the season. Pain. Confusion. Regret. Loss. Each emotion chipped away at his ability to concentrate as the Hylton High School senior prepared to face Battlefield in a game packed with compelling storylines.

There was the rivalry, one of Prince William County’s best in baseball. The game also featured two of the area’s top pitchers in Shepard and Battlefield’s Jake Agnos. And there was the Battlefield connection. Shepard’s two older siblings graduated from the Haymarket-based school. Shepard transferred to Hylton his freshman year, but returning to pitch at Battlefield always had a home-grown feel to it.

But the biggest storyline for Shepard superseded all the others. This was more personal than just a highly anticipated matchup.

On Feb. 10, Payton Freeze, a Battlefield senior and Shepard’s girlfriend for almost a year, committed suicide at age 17. No one made Shepard happier than Payton and now she was gone. She was a victim, her parents believe, of bullying and of chronic traumatic encephalopathy stemming from a concussion she incurred playing soccer in 2014.

Hylton’s coaches discussed whether to start Shepard but decided it was best to let him pitch no matter the outcome. Shepard agreed. Of the 11 batters he faced, Shepard walked four, hit one and allowed three earned runs in 47 pitches before being pulled in the second inning with no outs and with tears in his eyes.

The 8-1 defeat wasn’t all on him. Agnos pitched masterfully, striking out 17 in recording a no-hitter. Shepard, though, was definitely off. Under normal circumstances, the 18-year-old right-hander would have thrived in these conditions, like he did a year ago when he struck out seven and allowed no runs over four innings in Hylton’s 1-0 loss to Battlefield.

Those in the know understood Shepard’s struggle, especially Payton’s father Brent, who was in attendance. The only question on everyone’s mind was whether Shepard could stop blaming himself. Could he have done more? For his team? For Payton? It all seemed to run together as self-doubt consumed him. One moment he was fine, the next a mess.

After leaving the game, Shepard sat down on a bucket in the dugout lost in thought. Then a breakthrough. Teammate Colin Verberg came over and told Shepard “We need you.”

He heard the same thing from others, including Payton’s parents. But in that moment when something so natural like pitching a ball over the plate eluded him, a light shone in a dark place. Shepard realized it was time to move on without letting go.

“That game needed to happen,” Shepard said. “That was the first step to getting back on track.”

“You need to call me right now.”

The urgency in Steve Tian’s text to Shepard was unmistakable. At the time Tian contacted his friend, Shepard was in the parking lot at Chris Yung Elementary School in Bristow in a car with his grandmother, waiting to pick up his younger brother. Shepard sensed something was amiss as tweets scrolled across his phone mentioning the Freeze family. Tian only confirmed what Shepard suspected. Payton had killed herself. The news devastated Shepard.

He ran across the parking lot to the school’s softball field, dropped to all fours in the middle of the field and sobbed. As word spread throughout the community of Payton’s death, friends, coaches and family scrambled to locate Shepard. He didn’t answer his cell. Nor did his grandmother, who searched for Shepard after he took off.

Shepard’s mother Kristy called the police as did school officials at Chris Yung after receiving word from teachers boarding students on the buses of an emotionally distraught male on the softball field. Shepard’s older brother, John-Austin, arrived at Chris Yung as police and his grandmother discovered where he was.

Shepard went home, where two of his Hylton baseball teammates, Christian Colangelo and Fox Semones, and his best friend, Hylton girls soccer player Lainie Humberson, waited. They comforted him any way they could. The three took Shepard to the vigil that night at Battlefield. They, along with others, stayed with him and took him out to lunch. Shepard also spent numerous nights at Semones’ house. The support overflowed and was non-stop. Gestures big and small meant everything.

At Payton’s memorial service, Agnos hugged Shepard. The baseball coaches from Walters State, where Shepard is headed next fall, checked in. Hylton head baseball coach Jason Ritenour emphasized to Shepard there was no need to rush back.

“We told him to take his time,” Ritenour said.

Shepard’s father Jay reminded him the most dangerous place was being alone, advice Shepard took to heart.

Shepard was touched by all the support, but he struggled to find his footing, especially in the immediate aftermath. The day Payton died, Shepard removed the pictures on the top of his Twitter page and left the space colored black. He missed school for almost two straight weeks and stopped training for baseball. When he did return to Hylton, Shepard broke down at unexpected times.

“Sometimes, I would have to stop my work,” Shepard said.

“I knew everything she was going through a lot for a long time,” Shepard said in reference to Payton dealing with the bullying. “Obviously I never thought it would come to this.”

Brent Freeze agreed to see Shepard after Shepard asked to meet him. In the days after Payton’s death, the two talked at Freeze’s house for four hours. Shepard declined to discuss the specifics of the conversation, but Brent Freeze reassured Shepard that Payton’s death was not his fault.

Shepard and Payton lived on the same street at one point and attended Bull Run Middle School together but did not connect until sophomore year. At first, they were just friends. Last spring, they began dating. Payton was Shepard’s first girlfriend.

Payton lifted Shepard’s spirits with her sunny personality. And she also helped him focus more. Before he met Payton, Shepard said he was “just floating.”

“In my life, I haven’t been an optimist or a happy person,” Shepard said. “She brought out a better side of me.”

He still goes at his own pace. Shepard returned to the gym for the first time almost two weeks after the baseball season had started.

But baseball remains a healthy release. He reaffirmed his commitment to his teammates and coaches following the opening-season loss just before 11 that night when he sent this group text: “I’ll take responsibility for tonight, I’ve been checked out for a while …. You all deserve better than that and I plan on doing everything I can to make it happen.”

After the Battlefield game, Shepard pitched out of the bullpen for his next three appearances as he worked on his mechanics and to get back into baseball shape. He was sharp in his second start when he struck out 12 in six innings of an eventual 8-1 win over Osbourn Park. On Monday, he recorded his third start against Paul VI, striking out 10 over six innings. Since the Battlefield game, Shepard has allowed one earned run in 18.1 innings, while striking out 32. He’s 2-1 overall this season with a 1.45 ERA and a team-high 33 strikeouts.

“He is the old Trey some days...and some days, he has what we call in the Army the "thousand yard stare," Jay Shepard said. “As I said, I've seen it before. He'll be okay. But time is the only thing that will really help.”

Stuffed in a box inside his locker in the Hylton clubhouse, Shepard keeps a black armband he wore in the Battlefield game around his left arm with two words, Pay Free, on it. Jay Shepard had the armband made at a store in Manassas. The band’s two words, parts of Payton’s first and last name, are Payton’s signature from a letter she wrote Shepard.

Shepard only wears the band for away games.

“If I’m at home, I feel like she’s there,” said Shepard, who also honored Payton by changing his uniform number from 15 to 6. Payton wore No. 6 for soccer. “But on the road it’s different. I need a reminder.”

There’s more he wants to do, especially on the issue of bullying, which has received more attention in Prince William County since Payton’s death. On Monday, the Prince William County Schools System along with The Safe School Advisory Council sponsored a session at Benton Middle School called “Take Away Student Bullying. How to Help Your Child.”

Shepard attended a county school board meeting in March and sat next to Payton’s parents as Brent voiced their desire for more concussion training and more vigilance toward bullying.

Shepard is glad to see the outcry become more public. He points to the "Freeze Bullying for Payton" Facebook page and Payton's Project page as other ways to increase awareness.

“The community as a whole needs to get better in every way,” Shepard said. “There’s so much negativity. There’s no reason to put down other people and be negative.”

Shepard said he sees bullying going on constantly in school without any available outreach for the victims.

“It’s horrible,” Shepard said. “There’s nothing there for them. No support system. No action being taken.”

Shepard said Payton’s struggles only raised his understanding of the problem. He feels more convicted now to speak out and stop it if he sees it happening. He also hopes to expand his crusade to a wider platform if he’s able to reach the major leagues. But he’s determined to maintain the fight no matter where he ends up.

This was a high school baseball game, right?