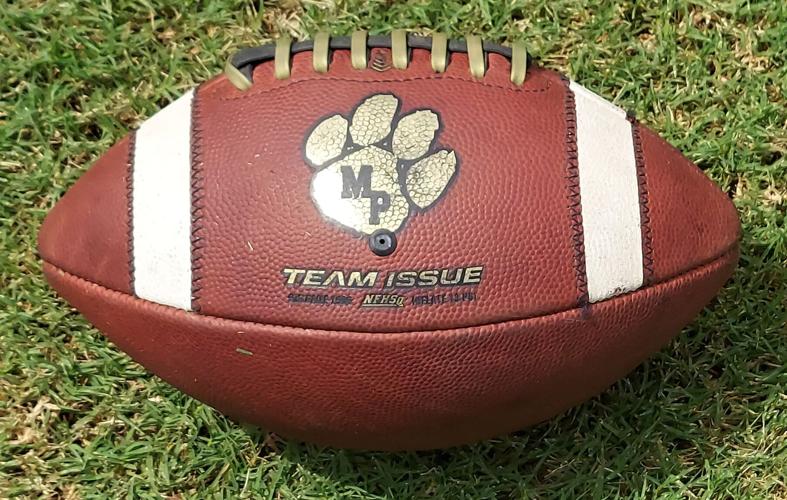 Over seven practice days in preparation for the 2022 season, Manassas Park's football team averaged a turnout of 11 players. The team is seen here finishing up practice Aug. 1, 2022.

Dan Forgas called it a tough message to send. But he had no other choice.

After holding off for a week in the hopes for improved numbers, Manassas Park High School’s activities director informed the Cougars’ football opponents and the Virginia High School League on Monday that the school would not field a football team on any level this fall due to the small pool of participants.

“We’re going to start looking at a rebuild,” Forgas said.

The school is also looking for a new head coach after Randy Starks resigned Sunday, Forgas said. Starks, a former NFL Pro Bowl player who commuted from Charles County, Md. and Stafford County, led the Cougars for one season as a first-year head coach. Manassas Park went 0-10 in 2021.

Over seven practice days in preparation for the 2022 season, Manassas Park's football team averaged a turnout of 11 players. The team is seen …

The decision to cancel the season was made after the roster numbers stayed too low to sustain a program. Forgas ideally wanted a minimum of 30 players to have a season.

Since starting July 28, Manassas Park averaged a turnout of 11 players over the seven days it held a practice.

The school originally planned to make a decision Aug. 1 on the program's fate, but held off until Aug. 5 to see whether the numbers increased. They did not. Manassas Park had a high turnout of 17 players on July 28 and Aug. 1 before those totals dropped to 10, seven and eight Aug. 3-5. The team did not practice Aug. 2 while the school figured out next steps.

The team only did weightlifting Aug. 5 before calling it a day at 8:45 a.m. The team did not practice Monday.

Out of fairness to the Cougars’ regular-season opponents, Manassas Park had to make a decision as soon as possible so those opponents could schedule other teams. Forgas said he informed those opponents ahead of time that they may have to find another team.

Manassas Park’s nine opponents have three options: They can take a forfeit, play a nine-game schedule with their overall power point total divided by nine or reschedule and find a 10th opponent.

Manassas Park dropped to nine regular-season games in the last month after it opted out of its season-opener at Osbourn on Aug. 25 due to the disparity between the schools in numbers and experience.

Last season, Osbourn defeated Manassas Park 56-0 before the game was called with three minutes left in the second quarter. In the state’s six-level classification system, Osbourn is in the highest division (Class 6). Manassas Park is Class 3.

Forgas said the school remains optimistic football can return in some form for the 2023 season and beyond.

“We’re not ready to throw in the towel yet,” Forgas said. “We want to give this another crack post-COVID and see what happens.”

One of the state’s smallest high schools, Charles City will have a football team this fall for the first time since 2019. Athletic director Andre Jones attributed football’s return to an increase in upperclassmen.

“COVID-19 wasn’t a main reason for us not fielding a team,” Jones said. “Charles City is a small community that doesn’t have any feeder programs, which makes it difficult to have programs at the high school level if there aren’t any foundations to develop fundamental skills.”

Following Starks’ resignation, Forgas said Manassas Park will begin searching for a new head coach with the plan to hire someone who has experience dealing with programs that struggle with numbers. Forgas said one positive under the circumstances is that Manassas Park will have time to find a suitable candidate.

“That’s the nice part to get someone who knows the kids,” Forgas said.

Randy Starks settled into the coaches’ office behind the weight room without any fanfare. And that’s the way he wanted it.

Forgas said the school would consider competing in eight-man football as a member of the Virginia Independent Schools Football League. Two public schools (Rappahannock and Chincoteague) are playing in the VISFL this fall.

Logistics could prove a challenge. Quantico, a first-year VISFL member, is the closest school geographically to Manassas Park. Most of the VISFL teams are in the Virginia Beach, Charlottesville and Richmond areas. Quantico, the Marine Corps’ base high school, is bringing back football after a two-year layoff due to the pandemic and small numbers.

Forgas said nothing is off the table. “We’re leaving open every option possible.”

Manassas Park was once a power in football, highlighted by winning the 2004 Group A Division 2 state title with a 14-0 record. But the Cougars have faced an uphill battle for years.

While the school's enrollment remains steady at around 1,100 students, changing demographics have played the biggest role in declining interest in football. With a student population that is mostly Hispanic, American football is less of a draw than soccer. In addition, students have other responsibilities – whether working or caring for siblings at home.

Other factors that have contributed to the declining interest include safety concerns due to concussions, transfers and the residual effects of the pandemic.

The Cougars did not have a varsity football team in 2018, but with between 20 and 25 players were able to have a junior varsity season that year. Manassas Park's decision to cancel the varsity season this year is the first time a Prince William County area high school has done that since the first local prep football program began at Osbourn in 1939.

Manassas Park still has a football team that matters

The day after Manassas Park High School announced its decision to cancel the 2018 varsity high school football season, the players returned to…

But this season, Manassas Park lacked enough bodies in general to support any football team.

The school tried a number of ways to improve turnout. Among them was going on Facebook and soliciting donated bikes so kids had a way to get to practice if they had no other means of transportation. They ended up with 15 for players to use.

At least 10 players had some varsity experience and 32 players registered this fall. But many had work or family commitments, were academically ineligible, were traveling out of the country or lacked a physical, and the school could not wait any longer.

In 2019, the Cougars returned to varsity competition and played an independent schedule against similar-sized opponents, including five private schools. Manassas Park finished 5-4, its first winning record since 2012.

During the pandemic-shortened season that was pushed to the spring of 2021, Manassas Park returned to district play and went 1-6. But injuries took their toll as opponents outscored the Cougars 140-21 over the final four games. Manassas Park had to forfeit its regular-season finale against Brentsville due to a lack of healthy players.

The pandemic hurt turnout even more. Kids were unable to play due to COVID-19 concerns or because they needed to help in the household by working after school. When injuries occurred, Manassas Park’s numbers dwindled to the point that the school did not have enough players to field a junior varsity team.

In the fall of 2021 under Starks, Manassas Park’s varsity was outscored 553-7 in going winless. The Cougars did not have a junior varsity team.

Manassas Park last reached the postseason in 2012 and has gone 12-64 overall over the past eight seasons.

After seeing the numbers dwindle at football practice, Randy Starks knew there was no chance for Manassas Park High School to field a football team.

Even though it is without a football program this season, Manassas Park High School has seen some encouraging signs for the future.

I think this goes back to the following: Laziness, deflection, lack of motivation, low work ethic and lastly lack of foresight! On the kids? NO, the adults have failed them!

Laziness because instead of tackling the situation head on, not on Aug 2 but through out the past year! Every DSA and head coach has access to ALL of the kids info, phone numbers addresses etc. Do your leg work talk to all of the kids! Who cares if you only have enough bodies to have a single sub varsity program do it! Deflection: easy to blame demographics, but a cop out! Gar-Field, Freedom and Unity Reed have very similar student breakdowns but all field competitive programs! Hold camps to introduce the kids to American football, have a seven on seven program in spring! Do what it takes!

This is a missed opportunity for a number of student athletes. My husband’s high school was so small that some players played both offense and defense. Not all positions would be able to do that and there may be rules against it, now. If soccer is popular, perhaps they should beef up their soccer program. Tbh, I really don’t know much about Manassas Park’s capabilities.

At the end of the day I think this is a 3A sports school? Manassas Park the city probably doesn't have extra money for sports. I mean, soccer is probably one of the much less expensive sports for sure to fund. But cool story with your hub's h.s. football team. That's old school for ya.

Just feel bad for the players who were looking forward to playing and the coaches wanting to coach. Don't forget the cheerleaders too.

I find it hard to believe that a school as big as Manassas Park, with over 1,000 students, can't find enough students identifying as boys interested in playing football. There's more to this story that Dave Fawcett is not telling us.

Paul B: He gave you the full story about half-way through the article. Here it is:

"While the school's enrollment remains steady at around 1,100 students, changing demographics have played the biggest role in declining interest for football.

With a student population that is mostly Hispanic, American football is less a draw than soccer. In addition, students have other responsibilities whether that's working or taking care of siblings at home."

That really is the full story. And if you read a little farther, you'll see that they also cancelled a Varsity season in 2018, so this isn't their first struggle with turnout. That population simply is drawn more to Soccer/"Futbol". Also, as Fawcett points out, the family life of those teenagers can be way different than their peers in other parts of the county.

Perhaps a good coach could champion the program, but he would probably need to be someone who has walked in their shoes and understands the cultural influences that are keeping participation down.