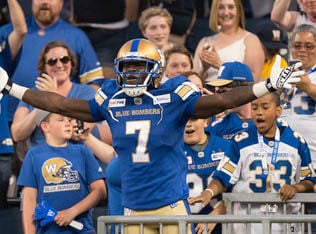 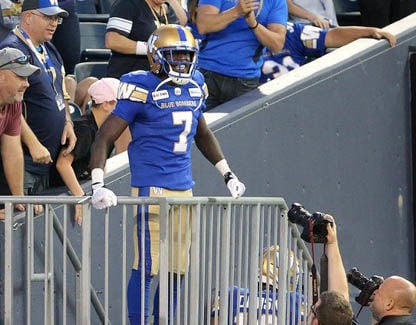 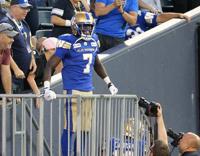 Once he became a pro football player, Lucky Whitehead made a name for himself primarily as a return specialist.

Although not used very often as a receiver during his time with the Dallas Cowboys and the New York Jets, Whitehead was capable of catching the ball.

Now playing with Winnipeg in the Canadian Football League, the Osbourn graduate showed Thursday night why he’s still a threat at wideout. Whitehead caught seven passes for 155 yards and two touchdowns in the Blue Bombers’ 28-21 win over Edmonton.

“I didn’t even know that I was going to be a receiver,” said Whitehead. “Always a lot of questions with that. People ask me if I’m a returner that can play receiver. I can do both, but whatever workload they give me I’m ready for, and it’s been fun so far.

“That was a breakout for me, just to show my speed. It was overall a great game.”

Whitehead demonstrated his quickness and elusiveness on the second touchdown when he escaped several defenders en route to the end zone.

“Unbelievable player,” Winnipeg quarterback Matt Nichols said. “The later touchdown, how many people in the world can turn that into a touchdown? Usually that would be a 12-, 13-yard gain, pushed out of bounds. He’s lightning in a bottle for sure.”

Winnipeg announced Whitehead’s signing May 9 following his performance at a free-agent mini-camp April 24-25 at the IMG Academy in Bradenton, Florida.

Whitehead has not been with a team since he began the 2018 preseason with the New York Jets. The Jets placed Whitehead on injured reserve Aug. 28 and no other NFL organization signed him that season.

Whitehead began his NFL career with Dallas, who signed him as an undrafted rookie free agent in 2015 out of Florida Atlantic. In two seasons with the Cowboys, Whitehead was used primarily as a return specialist but also was a reserve wide receiver. Whitehead averaged 25.6 yards per kick return and 6.9 per punt.

I wish the Skins would give Lucky a look. Lord knows they could use some offensive punch.

Miranda Lambert: COVID-19 made my marriage stronger than ever!