You are the owner of this article.
Edit Article Add New Article
You have permission to edit this article.
Edit
Home
News
Sports
Life & Events
Obituaries
Special Publications
Jobs
Marketplace
Legal Notices
About Us
InsideNoVaTix
Search
1 of 6 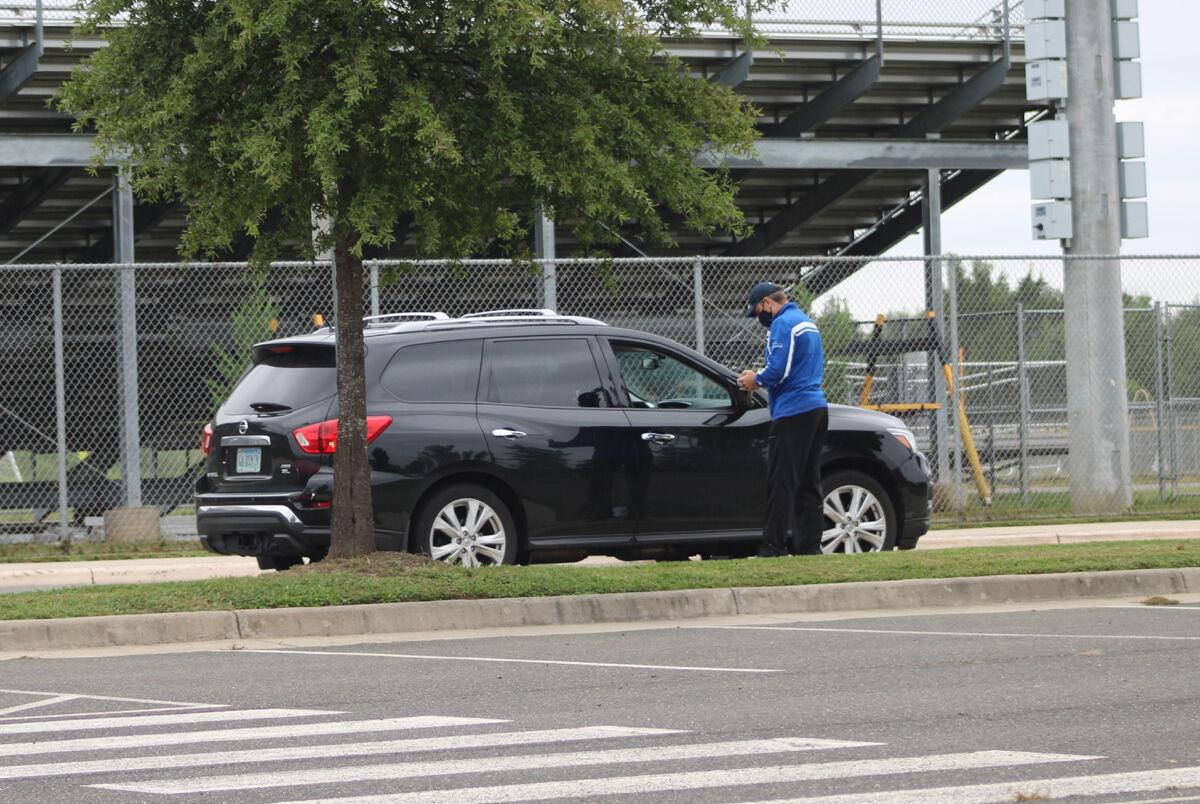 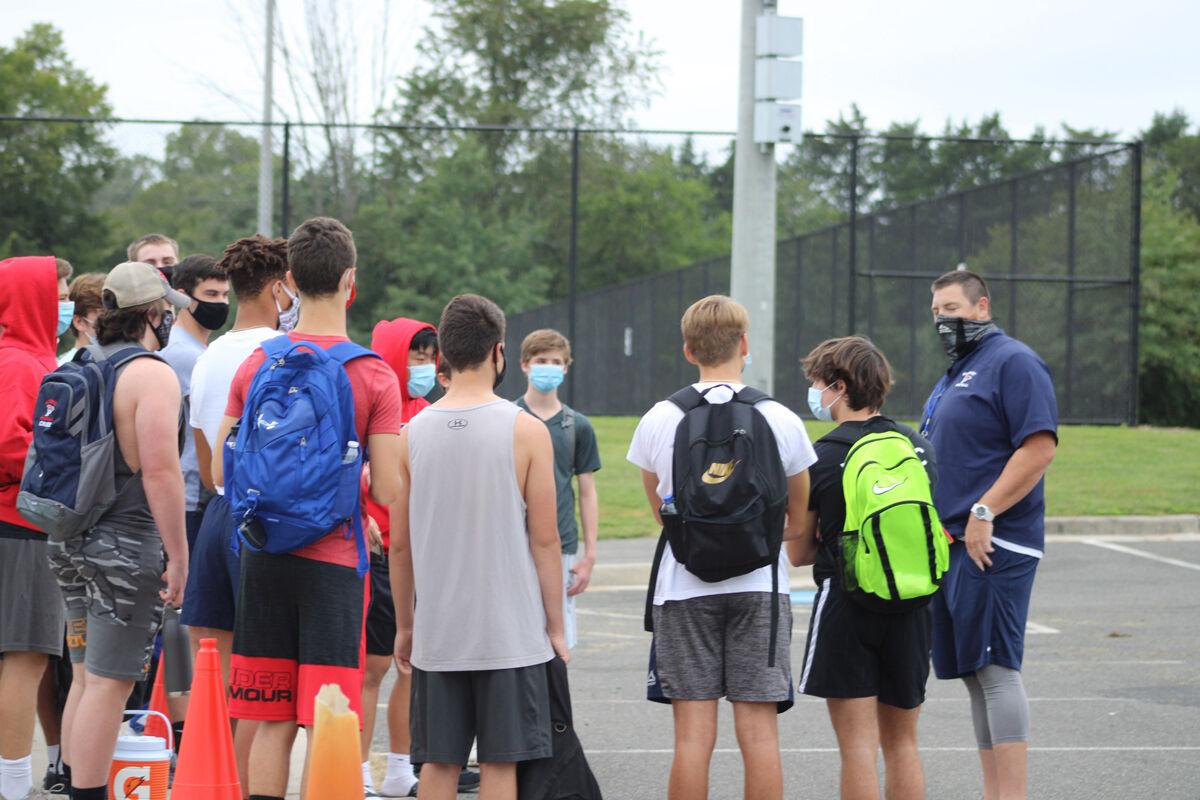 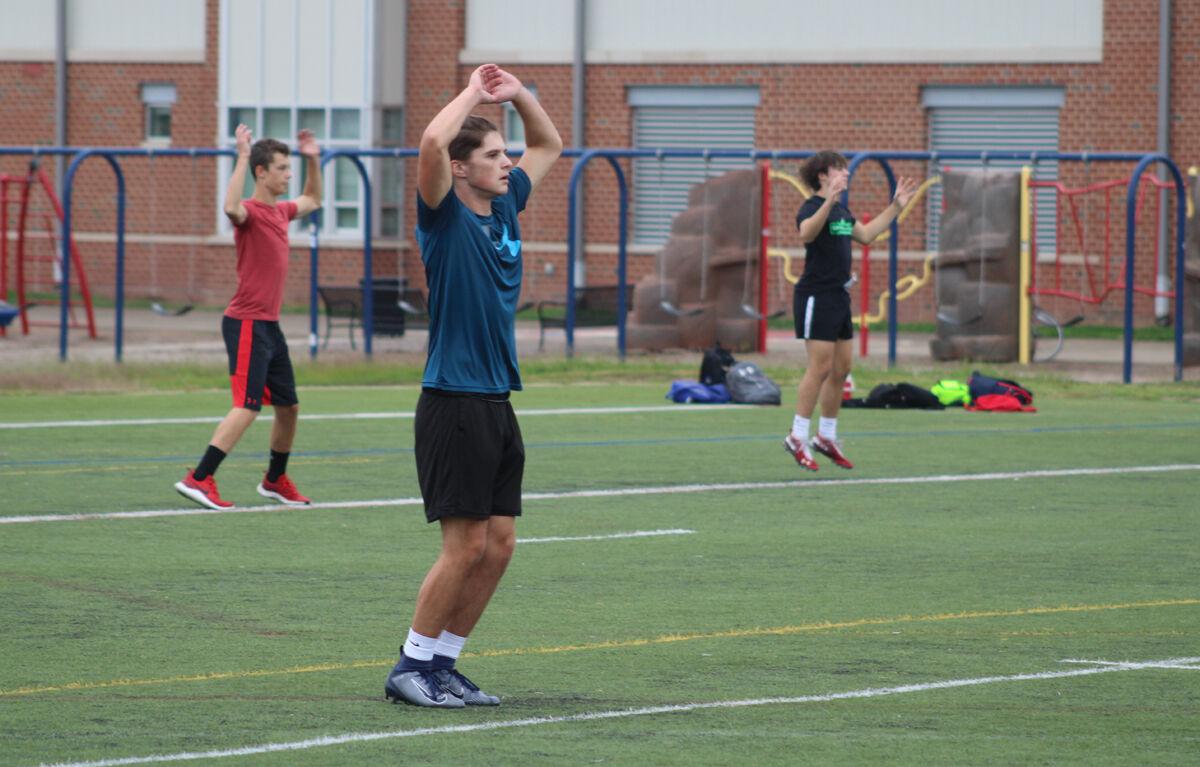 Sean Finnerty stood at midfield with a whistle draped around his neck ready to start Patriot’s first out-of-season football workout.

As rain began to fall on an overcast 70-degree Thursday afternoon in mid-September, the Pioneers head coach looked at the 23 players stationed at each corner of T. Clay Wood Elementary’s turf field and shouted out instructions.

“I know we’re living in crazy times,” Finnerty said. “But drop the hats. This is still football.”

Even though the high school football season is on hold until February and gatherings for the moment are limited to conditioning outside without the use of any equipment, Finnerty wanted his charges to remain in a football-frame of mind as best they could. If that meant removing something as minor as a baseball cap so be it.

After a six-month layoff, this was Finnerty’s first time to reconnect with a group he had not seen in person since March when the coronavirus shut down the rest of the school year and rearranged schedules.

Under normal circumstances, Patriot would have been decked out in helmets and pads and putting the finishing touches on a game plan for its fourth-regular season game the following night. Instead, this day marked something else: players wearing masks when they checked in and then, dressed in T-shirts and shorts, doing nothing more taxing than jumping jacks and pushups once they were on the field.

This was all they could do since the Virginia High School League’s Executive Committee approved a condensed regular-season and postseason format that will run from December to June with the winter sports season going first followed by the fall and then spring sports seasons.

But for the moment it was enough. These workouts represented a start toward competing this season. It was opportunity tinged with hope.

“I feel it is important to meet and be together as much as we can just for the social reasons,” Finnerty said.

That was the first step. The next was left to each school implementing a plan that required scheduling, training and adhering to strict guidelines to ensure proper safeguards were in place.

Patriot and Brentsville planned on starting Sept. 10, but inclement weather pushed everything back to the following week.

Some schools held off starting until the week of Sept. 14, while others waited even longer to sort out logistics before committing to a definite start date.

With county schools beginning the academic year virtually Sept. 8, some activities directors wanted to get everything in order first to help coaches and athletes acclimate.

“With the introduction of the online learning I feel the students and teachers/coaching staff have many items on their plate,” Forest Park activities director Brian Parke said.

Since the high school sports season will begin in December, there was time to implement plans without rushing into anything. With workouts held on a voluntary basis, each school’s athletic program decided when they wanted to begin out-of-season workouts if they want to do one at all.

Track, for example, was the only sport at Freedom to first participate in workouts. For other schools, teams gradually eased into the schedule. At Gar-Field, football and baseball began Sept. 14 followed by track and crew Sept. 21. Swimming, cross country, cheerleading, field hockey, softball, boys lacrosse, girls soccer and boys basketball preferred Oct. 1.

In October, Manassas Park will open up to two hours per day and allow specific equipment. Football, boys basketball, track/cross country and volleyball are the only sports conducting workouts at the moment.

Prince William County hopes to allow teams to use equipment, but only after it feels comfortable doing so based on COVID-19 data.

In the meantime, they make do with what they can.

Programs are limited to a maximum of two hours for each workout. That time includes pre-activity screening and dropping off and picking up.

Before an out-of-season workout occurs, the coach for each sport must provide a practice plan to the director of student activities. The plan must include staggered drop-off/pick-up zones. To facilitate the process, Finnerty said he did a trial run online the Monday before football began to work out any kinks.

The athletes are subjected to daily health-screening surveys as well as temperature checks and must bring their own masks and their own water bottles filled with at least a gallon of water. Anyone who has symptoms, a temperature of 100.4 and above and does not have the proper amount of water is sent home.

The maximum number of participants for each workout is 50 (including coaches).

Besides going through protocol checklist, schools must also have sufficient room outside to ensure everyone has access without too much overlap or proximity to each other. The day Patriot’s football team opened up at T. Clay Wood’s field, the Pioneers’ track team trained inside the football stadium. Patriot also has outdoor basketball and tennis courts and a grass practice field at its disposal.

As the days become darker earlier, it will be a challenge after school to allot time for programs if they remain restricted to training outside.

Of course teams can work out early in the morning. That’s what Patriot’s boys basketball team did when it held its first session Sept. 14. The boys began at 6 a.m. in the football stadium for two reasons.

First, the students don’t have zoom meetings on Mondays for class so they could rise early and then have time to return home and go back to bed afterward.

Head coach Sherman Rivers said the other reason for the sunrise start was gauging the level of commitment.

“It shows who is really serious about coming,” Rivers said. “No one wants to get up that early if you aren’t.”

Patriot returning starter Trey Nelson arrived at 5:45 a.m. and was thrilled to see the high turnout. Overall, 27 players came out that morning, including some freshmen.

Nelson said it was difficult at times remembering to maintain social distancing when they all wanted to talk to each other and catch up. Masks are required if participants are less than six feet apart. And athletes must depart the workout immediately once it is over.

“It’s not what we wanted, but it was good to get back with the guys,” Nelson said.

Like other athletes, Nelson had opportunities to compete in his sport with his travel team. That helped him stay in shape. All athletes, grades ninth through 12th grades, have the option of participating in workouts, but can also stick with their club teams for the moment.

Finnerty hoped to see higher numbers for Patriot’s first workout, but understood why they were lower at the outset as everyone eases in to allay any concerns.

The number of participants is not as big a deal right now anyway as opposed to having the opportunity to work together in some form.

Finnerty said the biggest challenge in all this is remaining flexible. Official football practice begins February 4 with the first of the six regular-season games scheduled to begin Feb. 22.

Until then, the coaches and athletes stay the course.

“I pride myself on being prepared, and with the current climate that is very difficult,” Finnerty said.

Justin Bieber glad he can 'grow' in relationship

Tory Lanez wants to speak out