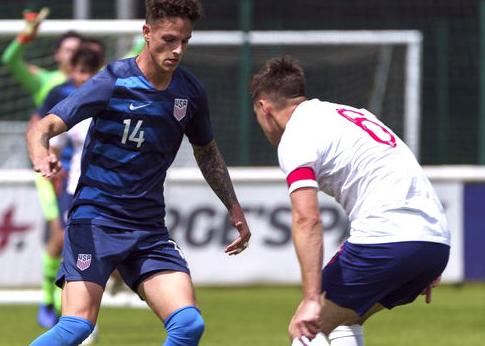 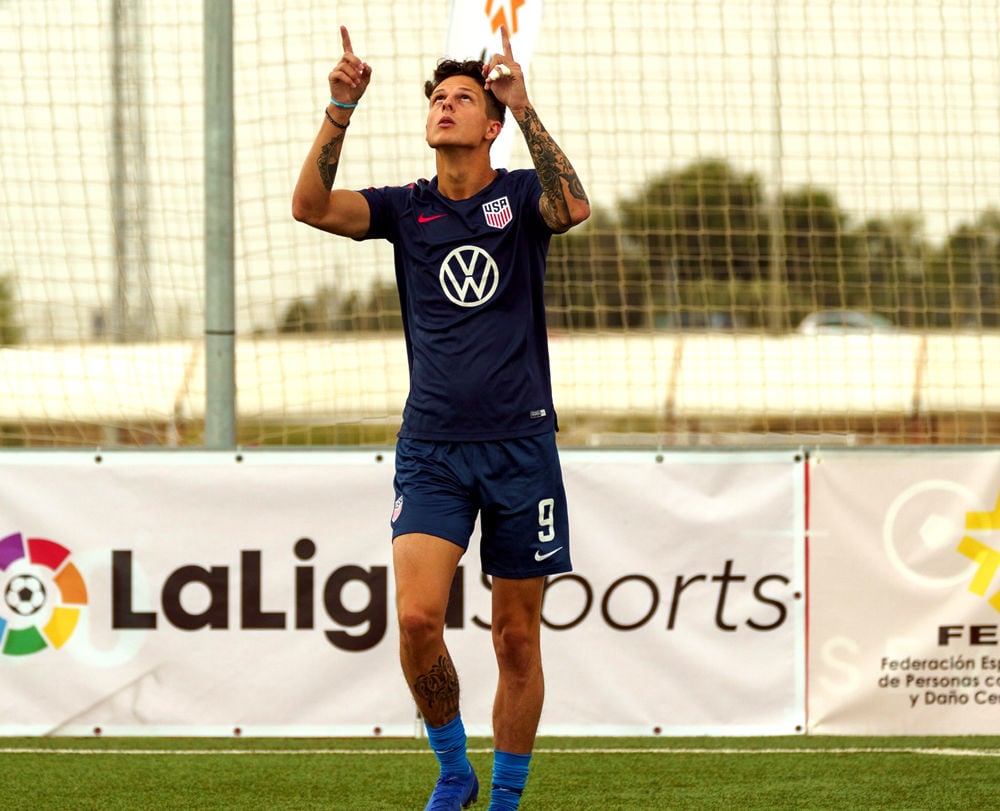 As he sat down for dinner, Nick Mayhugh had no idea why his cell phone suddenly started buzzing.

It wasn’t until his head coach messaged him a screenshot that Mayhugh realized the reason for all the commotion. American soccer star Alex Morgan, with just over four million followers, had given Mayhugh a shout-out on her Twitter account.

Earlier in the day, the Patriot High School graduate scored five goals to help the U.S. Para 7-a-Side National Team set new team records in a 13-0 win over Finland June 10 in a second-round match at the IFCPF World Cup in Spain.

United States Soccer Federation president Carlos Corderio tweeted out the team’s accomplishment, tagging both Mayhugh and Morgan as he noted that the U.S. Women’s World Cup team had won a first-round game by the same score, with Morgan also scoring five goals.

Nick Mayhugh felt numb as he stared into his locker and took stock of the items before him.

Corderio’s tweet caught Morgan’s attention. While attending the ticker tape parade in New York City honoring their World Cup title, Morgan took a moment to tweet congratulations to Mayhugh by tagging him. They now had a shared history after all.

Once Morgan sent her message, Mayhugh’s phone blew up to the point he had to turn off Twitter notifications and put the phone on his bedside table until the next morning. Even now, two weeks later, Mayhugh still receives comments from Morgan’s tweet.

“My phone was spazzing out,” said Mayhugh, who graduated from Radford last December, and has been a member of the U.S. Paralympic National Team since June of 2017. “I guess this is why high profile people have two phones. Or they mute notifications.”

Mayhugh suffers from mild hemiplegia, which means one side of his body was affected by a stroke, making him eligible for the team, described by U.S. Soccer as being “made up of players that have a neurological condition such as a traumatic brain injury, stroke, or cerebral palsy.”

Mayhugh appreciated Morgan’s mention, especially the fact that she found the time during the parade to mention his accomplishment.

“It was so crazy. It was a cool experience,” said Mayhugh, who has added 100 followers since the Morgan tweet and now is to 434 total followers. “But you have to act like you have been there before, right?”

He took all the comments he received in stride, including ones from his friends and girlfriend asking whether he and Morgan are now best friends.

Mayhugh had hoped to help the national team to a world championship. He responded to Morgan with a tweet that said “Thanks Champ !! Now we gotta finish it.”

The U.S. ultimately finished sixth, but still achieved some milestones.

The U.S. defeated Iran 3-2 in a first-round game to finish first for the first time in group play of a world championship tournament. Mayhugh scored the game-winner on a last-minute goal as the Americans posted their first win over the defending world champions and Paralympic silver-medalists.

Despite missing the quarterfinals after totaling too many yellow cards, Mayhugh still recorded a team-high 11 goals.

The U.S. plays next in the Parapan American Games Aug. 23-Sept. 1 in Lima, Peru.

The story of Josh Brunais is a long, winding road with twists and turns that often make him uncomfortable. Not to the point where he won’t dis…