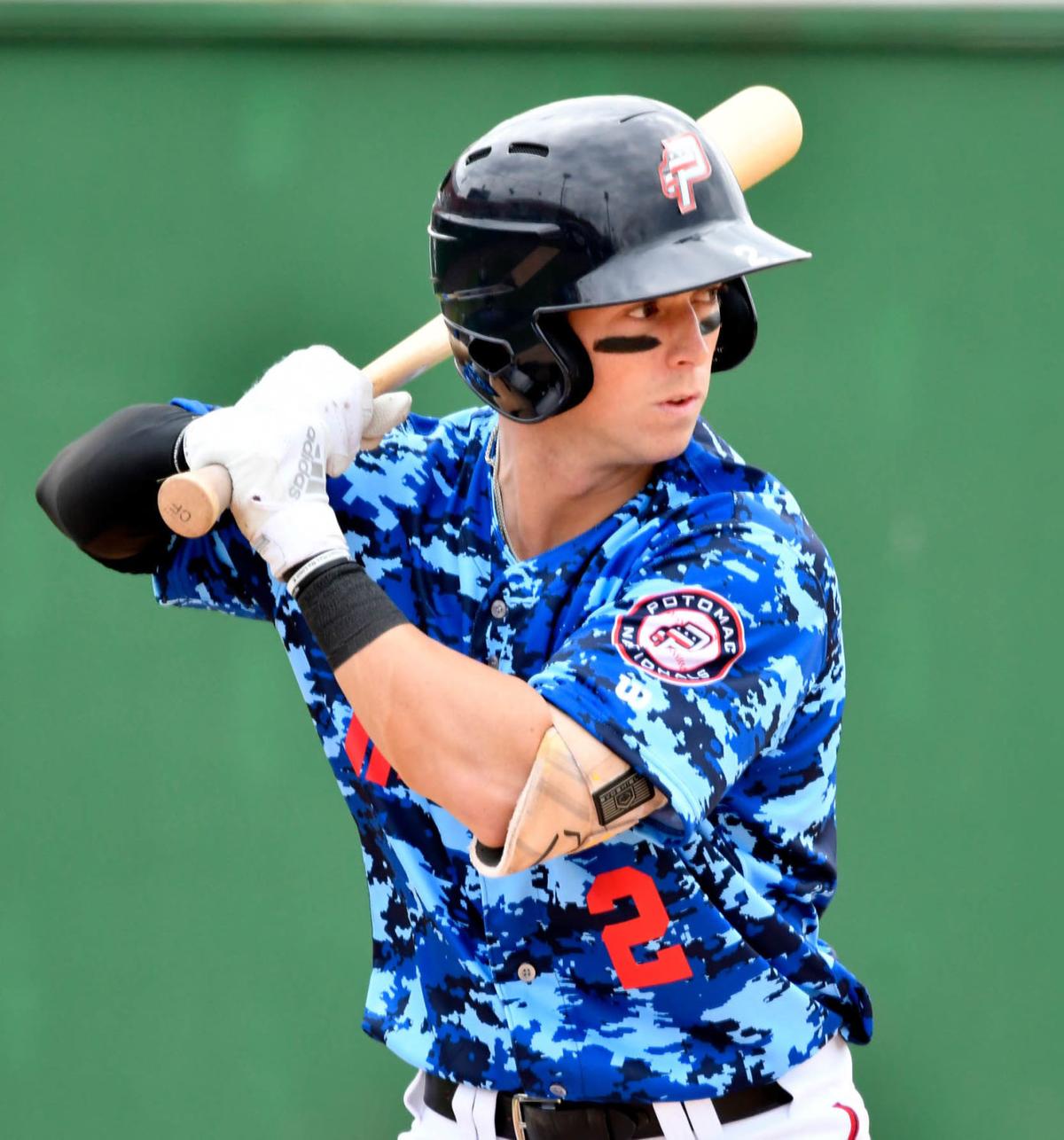 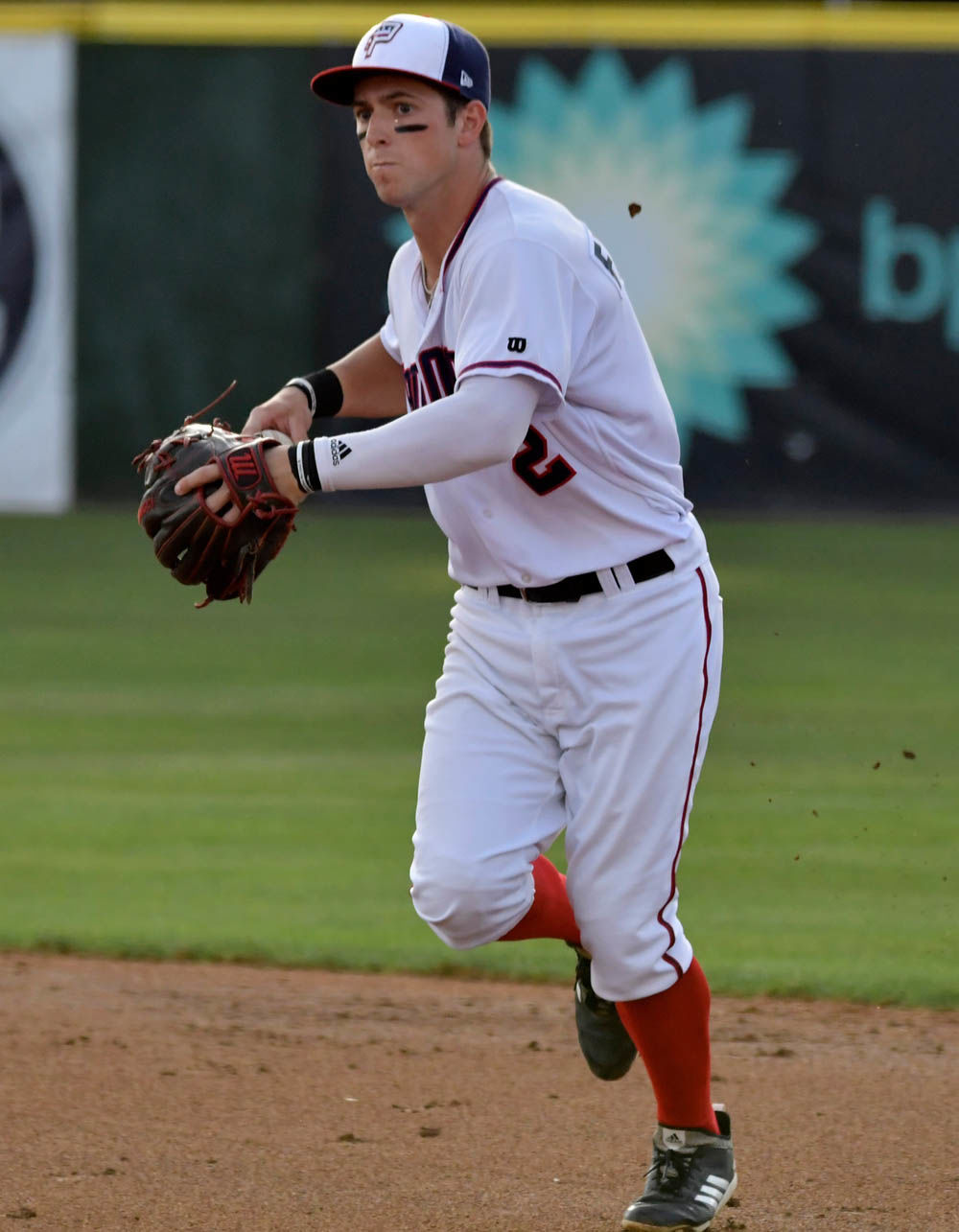 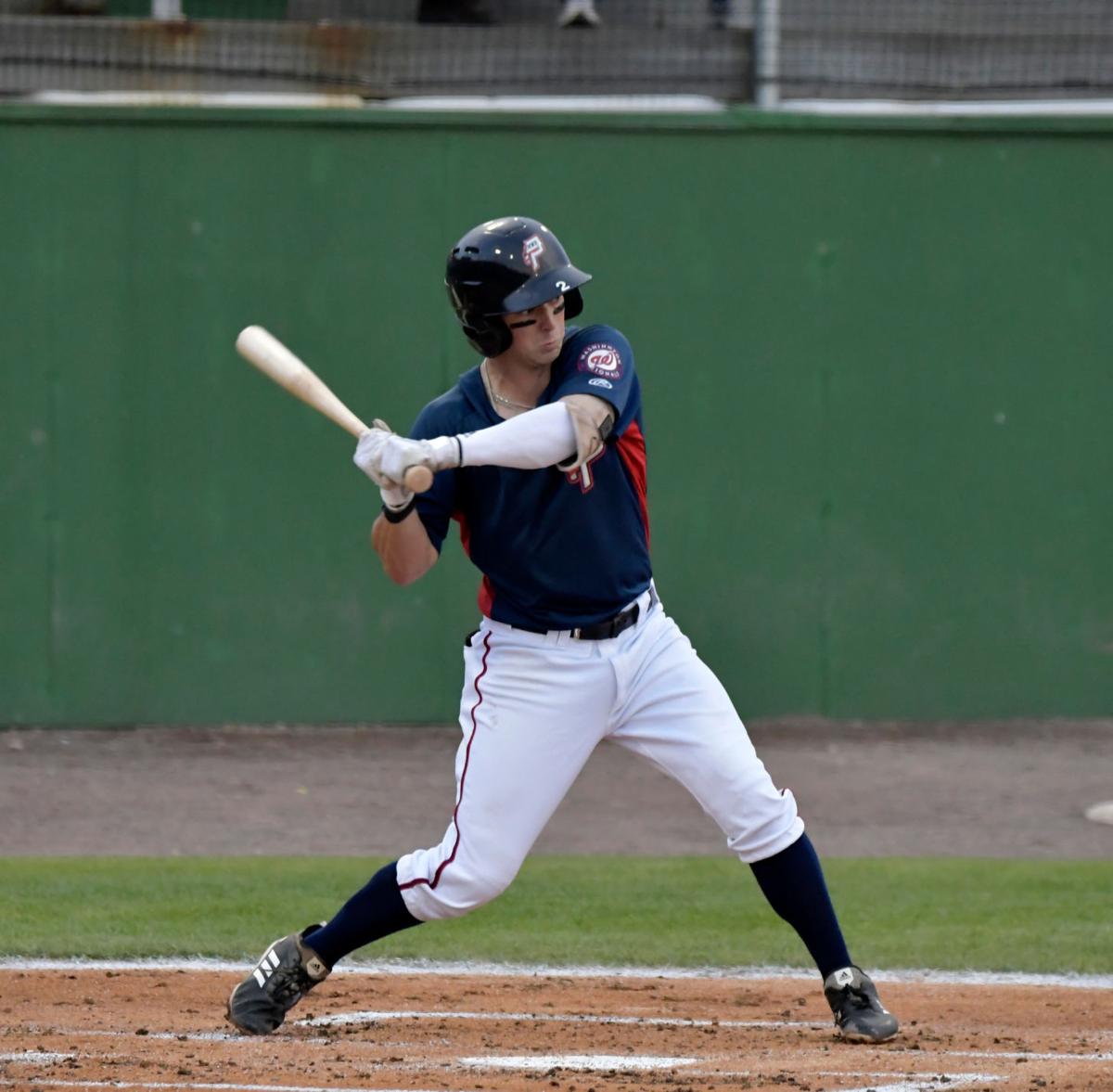 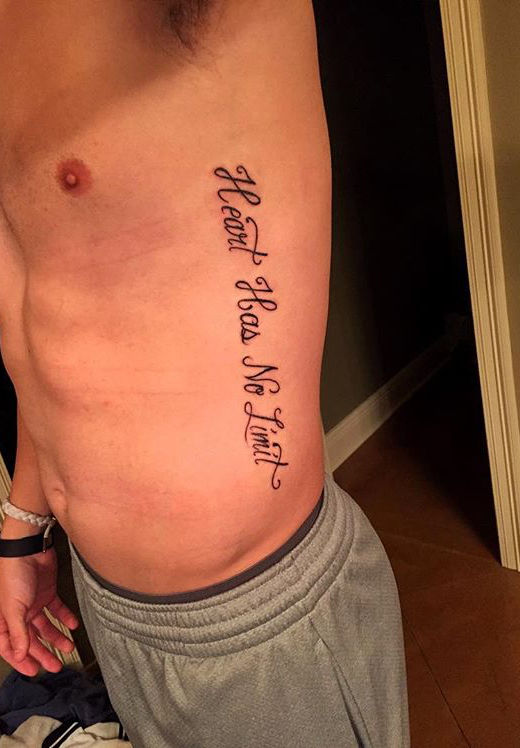 Cole Freeman tattooed “Heart Has No Limit” down left side. 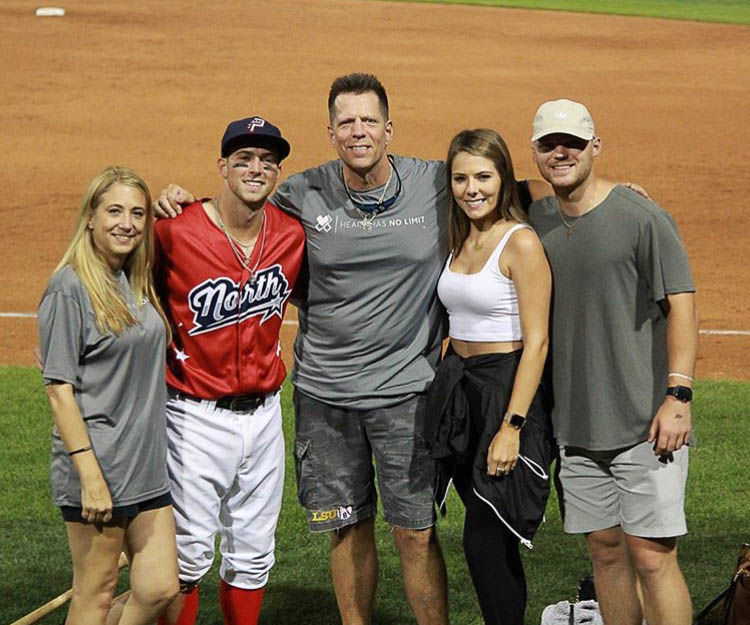 Cole Freeman tattooed “Heart Has No Limit” down left side.

If there’s a game on, Meritt McKittrick is probably watching it. The actual athletic event being contested is irrelevant to the teenager from Godley, Texas. She’ll watch anything.

And so it was, in June of 2017, McKittrick found herself glued to the television as the LSU baseball team played for a spot in the championship finals of the College World Series. She had the house to herself that day, which allowed her to focus on everything the announcers were saying.

Into the batter’s box stepped LSU second baseman Cole Freeman. The voices on the television spoke about Freeman’s background and how he overcame his small stature – 5-foot-9, maybe 175 pounds soaking wet – to become one of the best baseball players in the SEC and a legit draft prospect.

McKittrick wanted to know more. She grabbed her phone and started researching. Scrolling through Freeman’s social media accounts, she stopped on a post from December 29, 2015, in which Freeman showed off a tattoo he had gotten earlier that day.

It was simple, yet striking -- four words comprised of 15 letters in an elegant font spanning nearly 10 inches along the left side of Freeman’s torso.

Heart Has No Limit

Below the picture read the following caption: “Heart Has no Limit something I have lived by my entire life. It doesn’t matter how big or strong you are, if you have heart you can achieve anything you want.”

McKittrick, who was paralyzed from the waist down in a 2006 car crash, felt an instant connection with Freeman.

Freeman never intended to be anyone’s hero, let alone the face of an entire movement. Over the last few years, however, the Potomac Nationals second baseman has done just that.

He originally used the phrase “Heart Has No Limit” as a motivational tool to help him achieve his childhood dream of playing baseball at LSU. Today, it’s the backbone, and the trademarked name, of a business Freeman created after being selected by the Washington Nationals in the fourth round of the 2017 draft.

Its mission is to instill confidence in those who face any kind of adversity – athletic or otherwise – by sharing their stories and showing that anything is possible with the right combination of belief and hard work.

“I had no plans of turning it into a company,” Freeman said. “It was just for me.”

It all started with that tattoo.

The idea was hatched in Freeman’s bedroom one afternoon, where he and his sister Kacey batted around about a dozen ideas before settling on “Heart Has No Limit.”

“I remember we finally agreed on that one because it had ‘heart’ in it,” Kacey said. “That was the perfect thing for him.”

Freeman agreed, but with one caveat. He wouldn’t get the tattoo until after he established himself as an everyday player at LSU.

Freeman’s only dream growing up was to play for the LSU. Growing up 75 miles west of the university, just across Lake Pontchartrain from New Orleans, Freeman lived and breathed baseball. His obsession started at age 2 when he shocked his parents by doing something kids that age simply don’t do. He sat quietly on his father’s lap for an entire baseball game, start to finish.

Freeman was an all-state player at Lakeshore High School, but he never hit that high school growth spurt, which kept colleges away. The phones were silent, and the mailbox was empty. Only one college offered Freeman a scholarship, but there was no way he was playing for tiny Spring Hill College in Mobile, Ala. He had bigger dreams. So he waited.

Three weeks before the start of school, Freeman accepted a scholarship to Delgado Community College. It wasn’t LSU, but Delgado served as a suitable vehicle, given the program’s history of sending players to Baton Rouge. Freeman helped lead the Dolphins to the NJCAA Division I World Series his freshman season. Those extra games gave LSU coaches more time to scout him and come to the conclusion that Freeman was, indeed, LSU material.

On November 17, 2014, Freeman sat at a table alongside two other Delgado players. Sitting in front of them were three LSU hats. Standing behind them were proud parents. Wearing a purple LSU polo shirt, Freeman grabbed a pen and signed the paperwork he had been waiting for his entire life.

Freeman raked at LSU, hitting .329 as a junior and .315 as a senior to go along with 45 career stolen bases. Sandwiched between his two seasons at LSU was a summer in the prestigious Cape Cod League, where Freeman won the batting title.

All the while, “Heart Has No Limit” was in the back of Freeman’s mind, pushing him forward.

“It’s something I’ve lived by my entire life,” he said. “I’ve always had to prove myself.”

Meritt McKittrick remembers everything about the day she was paralyzed. She was 5 when it happened, riding in a car driven by her mother, Tara. They were on their way home from the grocery store, just a few miles from the house, when a drunk driver lost his way and smashed into their car.

She remembers her mother talking to the first responders as they were being pulled from the wreckage.

She remembers hearing the raindrops pelt the roof of the ambulance.

She remembers every bump in the road on the way to the hospital.

“To this day, it blows my mind how I can remember so many details,” she said.

The head-on collision left McKittrick confined to a wheelchair, but she maintained full function of her upper body. Still, she faced the very real likelihood of never walking again. Her mother lost part of her right leg and now wears a prosthetic.

McKittrick, now 18, read everything she could find on Freeman during that LSU game in 2017. The next day, she sent him a message through Instagram, relaying her story and how she lived her life by the same credo.

“I was kind of nervous to send it,” she said. “I’d never done anything like that.”

Freeman cried as he read McKittrick’s story. He couldn’t fathom how someone in her position could find inspiration from a baseball player. When his college career ended, Freeman reached out to McKittrick again and asked her to be the first official ambassador for “Heart Has No Limit.”

“She got it all rolling,” Freeman said. “Her story is absolutely incredible. That’s what made me want to do more with it.”

McKittrick, who won two high school state titles in wheelchair racing, has worn her “Heart Has No Limit” bracelet since the day she bought it.

McKittrick is one of three ambassadors for the company, and their stories are featured prominently on HeartHasNoLimit.com. Their jobs are simple – spread the message, promote positivity, and re-establish hope for those who may have lost it.

Lincoln Forges, a 19-year-old from Apopka, Fla., was born with a heart defect, had a transplant before his second birthday, and, at age 16, developed Post-Transplant Lymphoproliferative Disorder, a rare condition that can appear years after a transplant. He’s 2-0 against cancer, and will enter his sophomore year of college this fall.

“It’s not just overcoming illness and playing sports,” Forges said. “It’s about everyone out there who has gone through something and getting through it.”

Layken Sanders was determined to play high school volleyball despite standing just 5-foot-1. The 21-year-old from Troy, Ala., laughs when she thinks about how it must have looked seeing someone her size on the court with other players towering above her. She played the only position she could – setter – and was a key contributor in each of her final three years.

“I just want other kids to feel like they can do whatever they want,” Sanders said. “Kids have a heart, no matter their size or anything.”

Freeman still can’t believe the impact they’ve had on so many people in such a short amount of time. He reads every message that hits his inbox and looks forward to meeting his “Heart Has No Limit” ambassadors in person some day.

To Freeman, they are the real heroes.

“You have kids that have been in car accidents, and they’ll never walk again,” he said. “They go to therapy thinking about my story. I’m just playing baseball. They got something they didn't deserve, and they’re thinking of my story? It’s way bigger than me, and that’s the coolest thing.”

Ryan Sonner is a freelance writer based in Woodbridge. You can reach him at rsonner@gmail.com or at www.ryansonneronline.com.