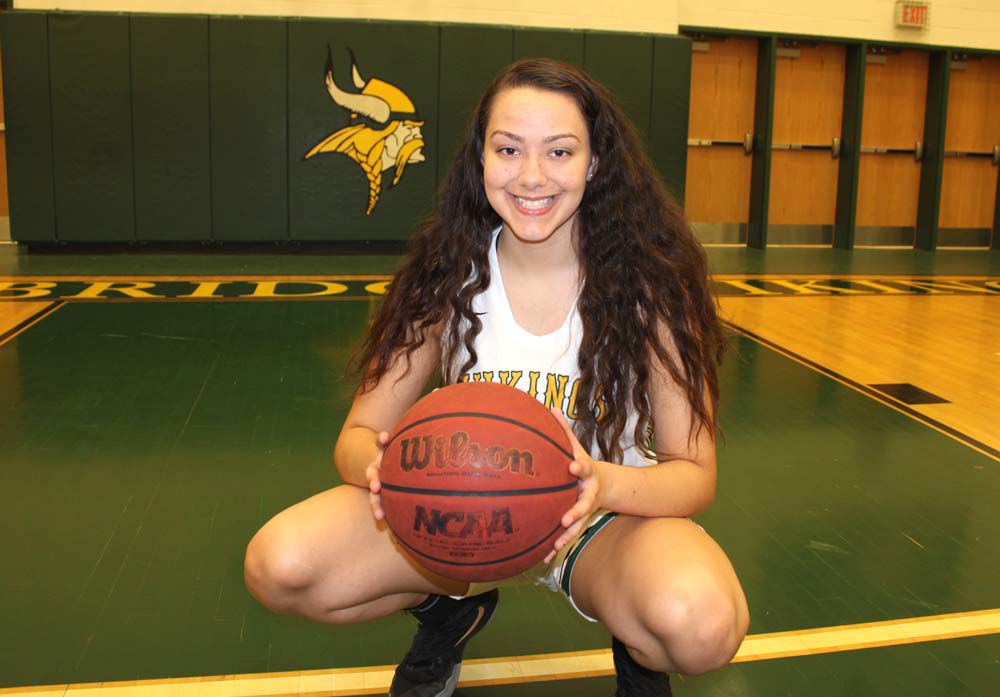 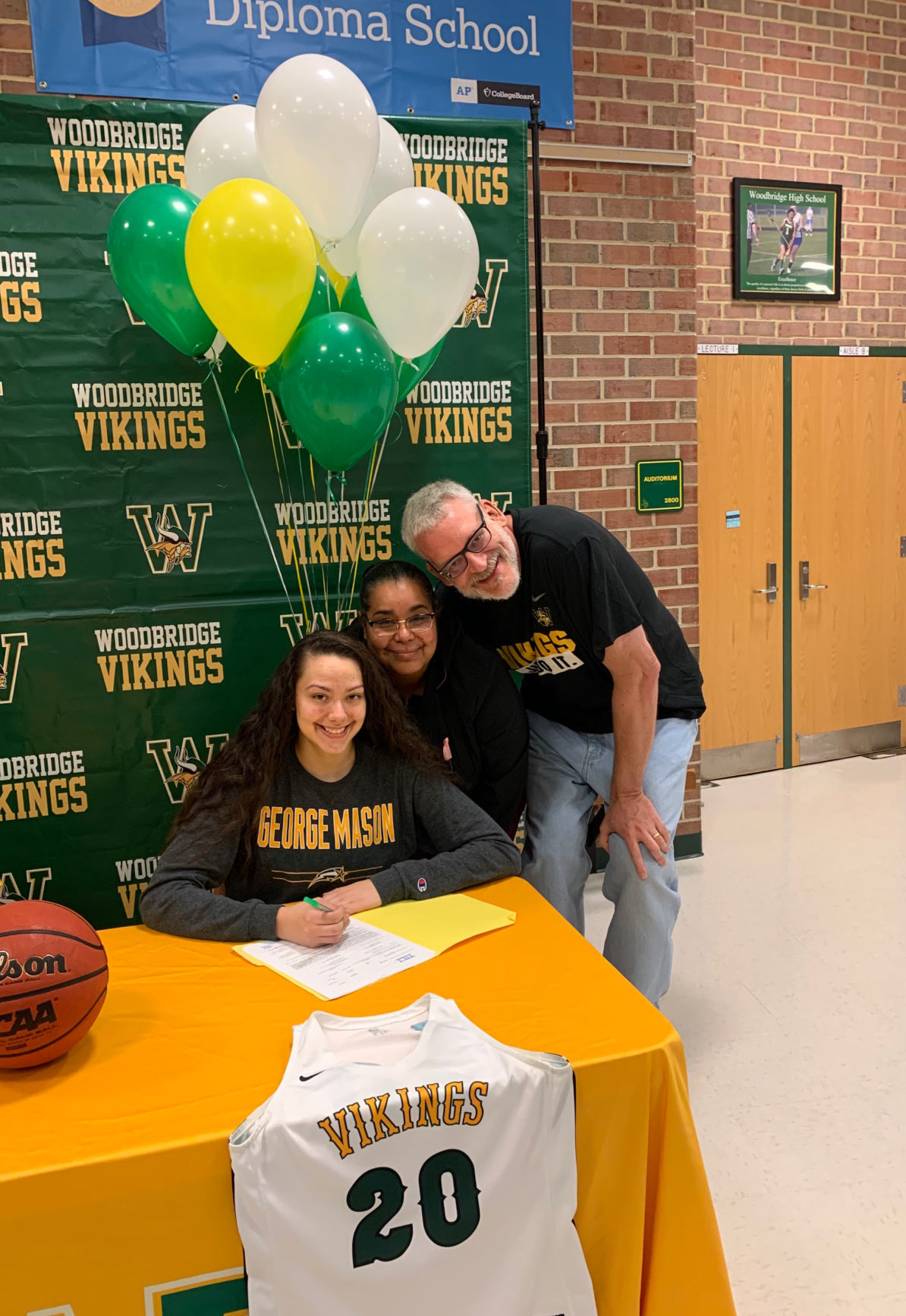 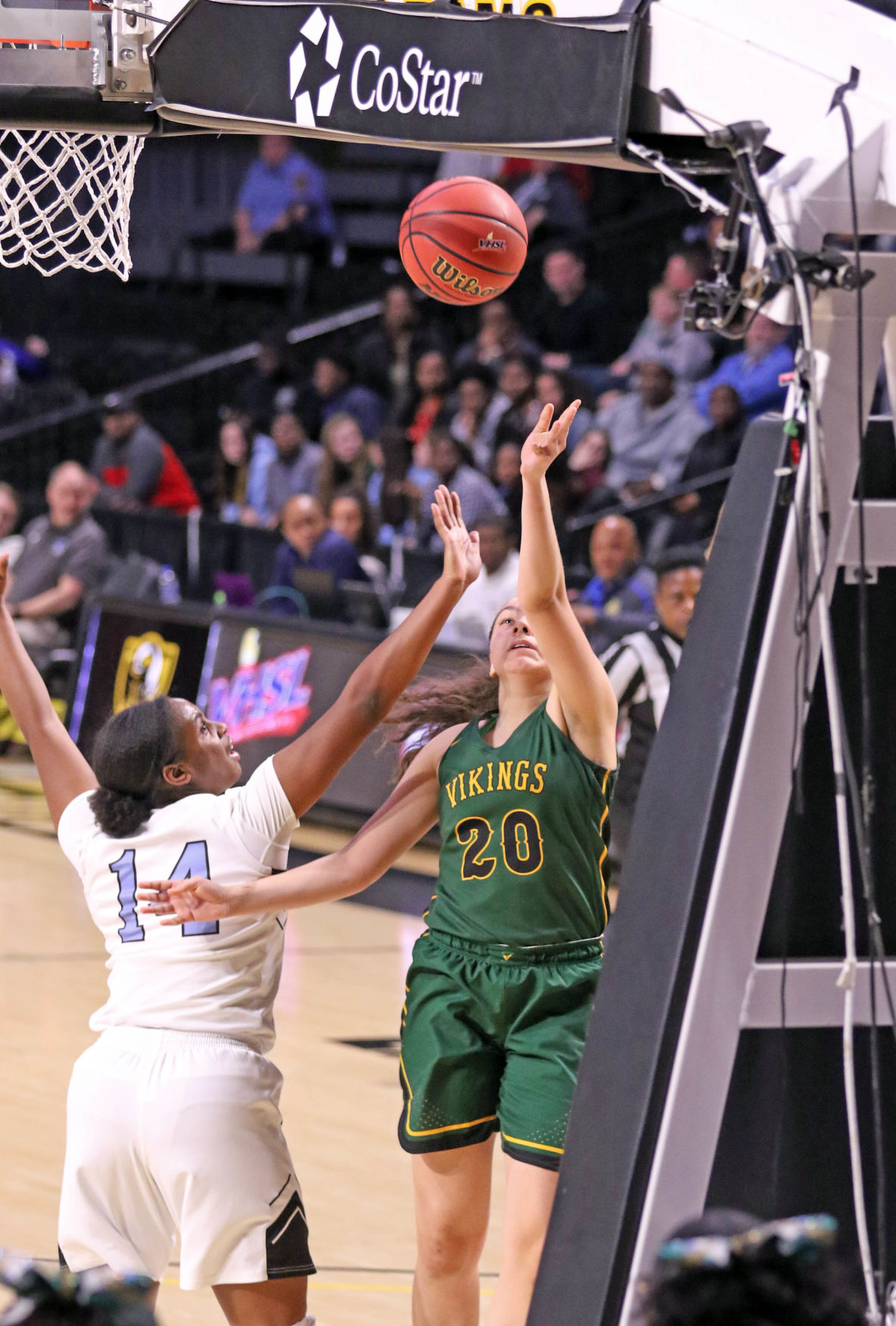 Woodbridge's Vanessa Laumbach scores two of her seven points against Cosby during the state finals in Richmond on Wednesday, March 6, 2019. 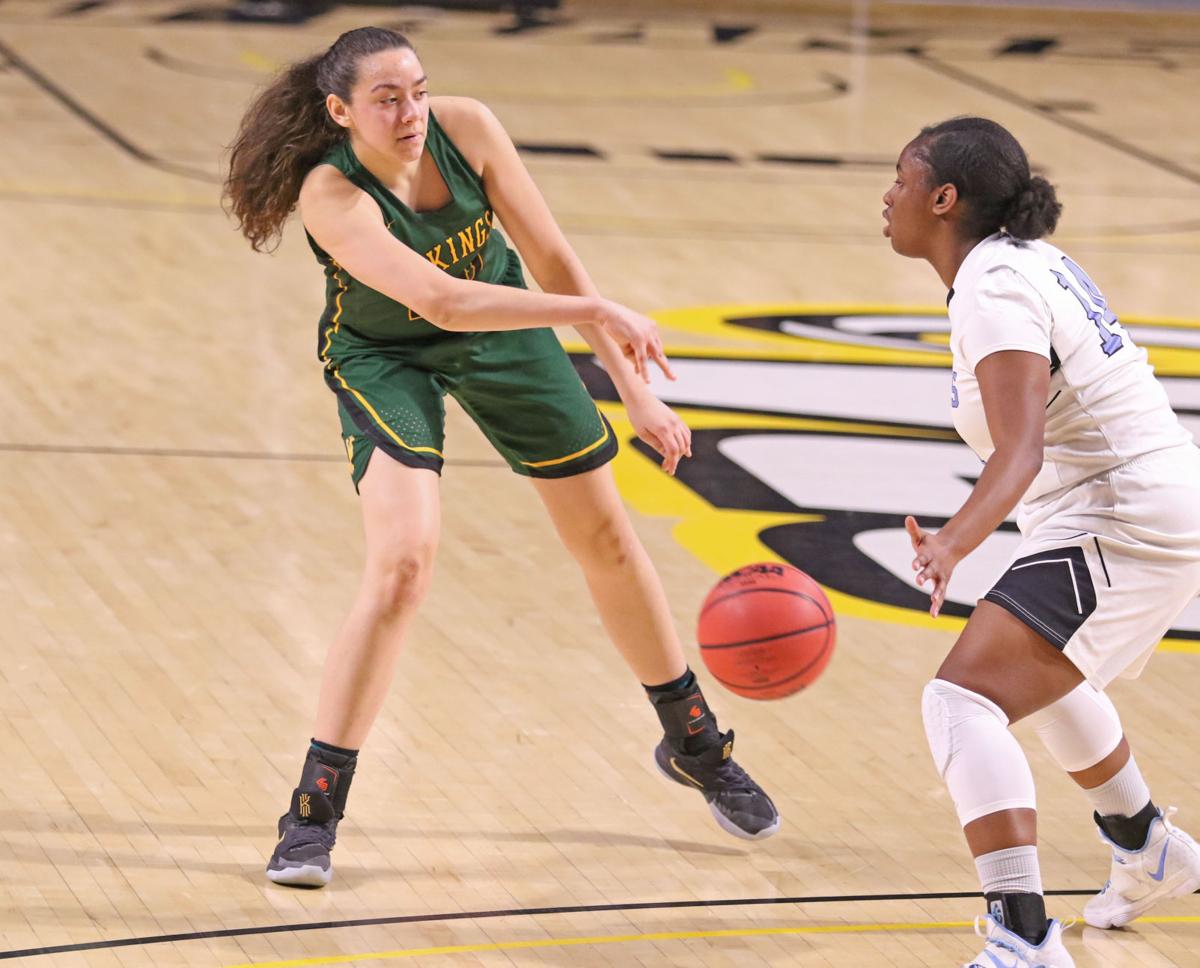 Woodbridge's Vanessa Laumbach passes against Cosby during the state finals in Richmond on Wednesday, March 6, 2019. 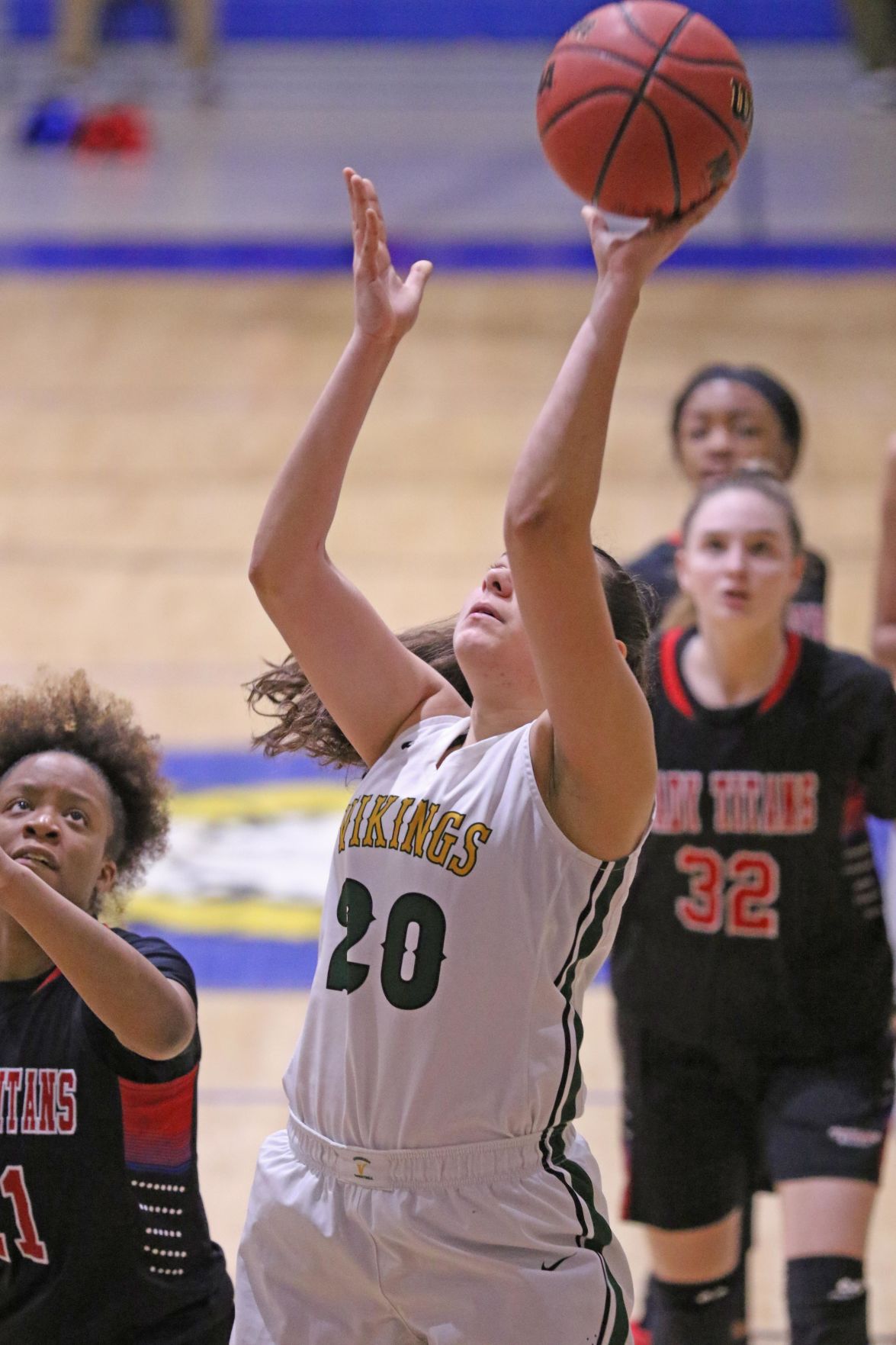 Woodbridge's Vanessa Laumbach does her part with a bucket here against T.C. Williams as Woodbridge would go on to advance to Wednesday's Class 6 state final with a 61-50 victory on Monday, March 4, 2019 in Fairfax. 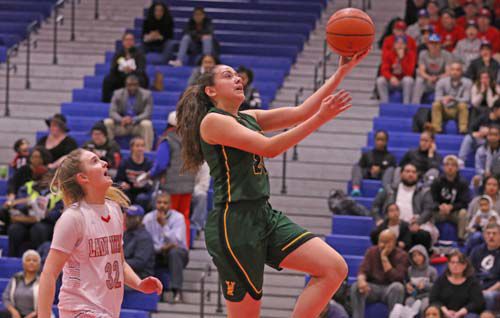 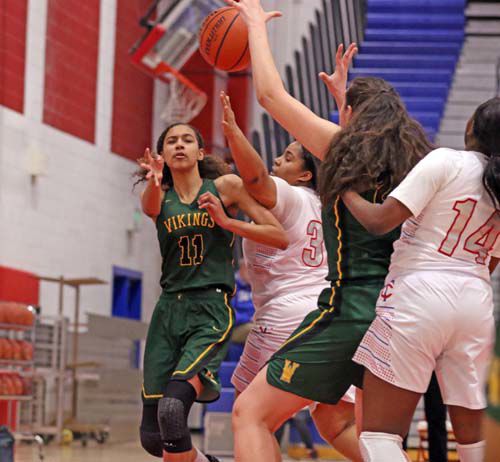 Woodbrige's Adaija Bender tosses a pass to Vanessa Laumbach that would turn into a bucket and an assist against T.C. Williams on Tuesday, Feb. 26, 2019. 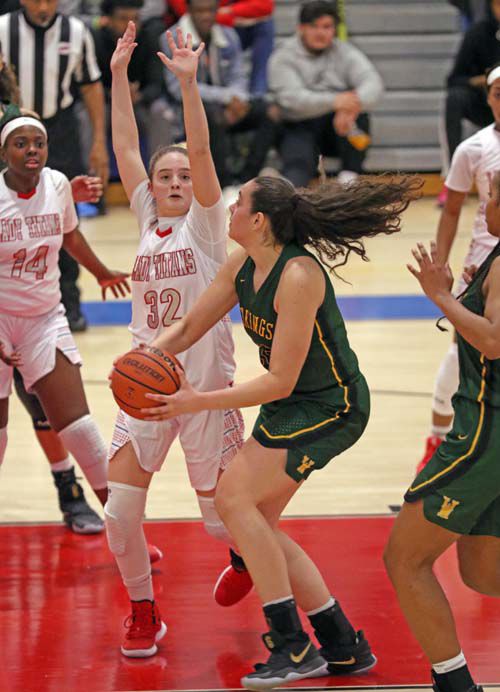 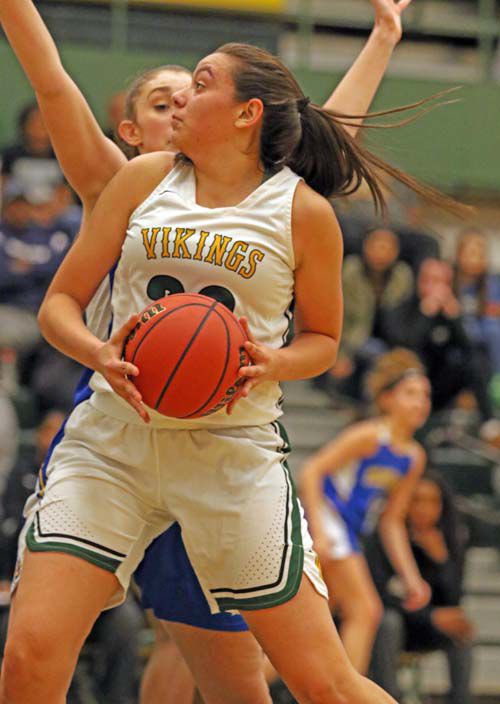 Woodbridge's Vanessa Laumbach maneuvers for a bucket against Osbourn Park en route to her team's 63-56 victory on Monday, Dec. 3, 2018.

Woodbridge's Vanessa Laumbach scores two of her seven points against Cosby during the state finals in Richmond on Wednesday, March 6, 2019.

Woodbridge's Vanessa Laumbach passes against Cosby during the state finals in Richmond on Wednesday, March 6, 2019.

Woodbridge's Vanessa Laumbach does her part with a bucket here against T.C. Williams as Woodbridge would go on to advance to Wednesday's Class 6 state final with a 61-50 victory on Monday, March 4, 2019 in Fairfax.

Woodbrige's Adaija Bender tosses a pass to Vanessa Laumbach that would turn into a bucket and an assist against T.C. Williams on Tuesday, Feb. 26, 2019.

Woodbridge's Vanessa Laumbach maneuvers for a bucket against Osbourn Park en route to her team's 63-56 victory on Monday, Dec. 3, 2018.

For her freshman year, Vanessa Laumbach focused on building her confidence and maintaining her spot as a starter for Woodbridge High School’s girls basketball team.

For her sophomore year, Laumbach branched out by staying after school to work on her game.

And for her junior year, Laumbach expanded her repertoire by becoming a more active scorer, including from the 3-point line.

In each instance, Laumbach progressed by adding a new piece to her preparation and performance.

But her senior year will look different. Some responsibilities she’s ready for. Others she’s slowly embracing.

The bottom line, though, is that Laumbach is no longer just a role player. She’s the defending Class 6 state champions’ leader. This is her team now.

“I’m putting her in a position to score double figures in points and rebounds,” said first-year head coach Darius Wilson said. “She can’t stay in the back. If she does, we will not play well and we will struggle. I want her to dial up 3’s more and be a force more with the ball in her hands.”

Laumbach understands the need for her to score and rebound more following the loss of four starters off a 29-1 team that’s won 43 straight regular-season district/conference games. And she’s expected to flourish in those areas.

“She has good instincts around the basket and knows how to post and control her defender,” said Colgan head girls basketball coach Fred Milbert. “She has always impressed me with her tenacity and competitive energy. I believe it will be very tough to contain her.”

But if there’s one part of her rewritten job description she’s learning to accept, it’s this:

Wilson wants the 6-foot-1 Laumbach to evolve into what he calls a point/forward, which means among other things becoming adept at bringing the ball up the court.

Wilson emphasized that during a fall league game when he had her play the point for the final nine minutes.

Laumbach understands why Wilson wants the ball in her hands. It’s good for the team and also for her development as she prepares for the next level playing Division I basketball for George Mason University.

It’s taken some time, but she’s warming to the idea.

“Each year, I move out of my comfort zone and progress,” said Laumbach, who last season earned first-team, all-state honors in averaging 9.7 points and 5.3 rebounds in 30 games.

Wilson, who replaced Tamika Dudley over the summer after Dudley left for Sidwell Friends, has no qualms about pushing Laumbach. In Wilson’s eyes, Laumbach, a self-professed introvert, needs some healthy pushing.

“Once she opens up, she’s the loudest, goofiest person you’ve ever met,” Wilson said. “One of my missions is to get that side to come out all the time.”

But she became the focal point with state player of the year Aaliyah Pitts transferring to Bishop McNamara in Maryland and 6-2 junior Adaija Bender (second-team all-district) not playing this season for the Vikings.

Wilson doesn’t want Laumbach to feel additional pressure. He wants her to realize her potential.

“I’m trying to get her to understand she’s capable of more,” Wilson said.

To underscore that point, Wilson added Selina Archer to his coaching staff to work with Woodbridge’s post players. The 6-4 Archer, who played at St. John’s University, challenges Laumbach because she rarely faces players taller than herself during the high school season.

“It was a real eye opener,” Laumbach said of going up against Archer. “[Archer] did not hold back. Physically I’m not used to that at this level.”

Given her work schedule as a manager of a nearby Lidl, Archer is not always able to make workouts. But when she does come, Wilson notices Laumbach’s immediate reaction.

“Her eyes light up,” Wilson said.

Laumbach has always been tall for her age. She topped out at her present height in seventh grade.

Although she does not come from a basketball playing family, there is definite length in the gene pool. Her father Paul is 6-11.

Given her size, basketball seemed like a logical sport for Laumbach. She started playing hoops in the summer before fifth grade when she attended a camp held by Dudley. The experience emboldened her to play at Lake Ridge Middle, where as a seventh and eighth grader she competed on two regional championship teams.

The experience also gave her the opportunity to learn under coaches who boosted her confidence.

“Basketball allowed me to make connections with people I normally wouldn’t make if I didn’t play the sport,” Laumbach said. “I enjoy the sensation of winning, competing and being a part of something greater than myself.”

Laumbach became a fixture in the Woodbridge starting lineup as a ninth grader and never relinquished that spot. In 86 games, she’s only missed one, the state quarterfinal against Langley her sophomore year.

Feeling pressure in her calves the entire season, Laumbach played through the pain until it became too much. She tried to dress for the Langley game but couldn’t go and instead watched from the bench as Woodbridge lost 47-46 to end its season.

“It was one of the most frustrating situations I’ve ever been in,” Laumbach said. “The experience motivated me to talk to our athletic trainer to come up with solutions. I ended up working out with my trainer, Deante Steele, to strengthen my calves and learn effective stretches to prevent the pain. It has gotten significantly better.”

As she prepares for her final season, Laumbach sees changes everywhere. New faces, new uniforms, a new coach and new style. But she also sees the same expectations. It’s her team now and she’s ready to step up and lead a program that’s gone 75-11 in her last three years even if that means dribbling the ball up the court now and then.

“We still have each other and we have the same goal,” Laumbach said.

Zack Blue never asked any questions when his mother Michele called him in the early morning of Oct. 11. Michele’s quivering voice said enough.…

Hank Azaria officially steps down from voicing Apu on The Simpsons