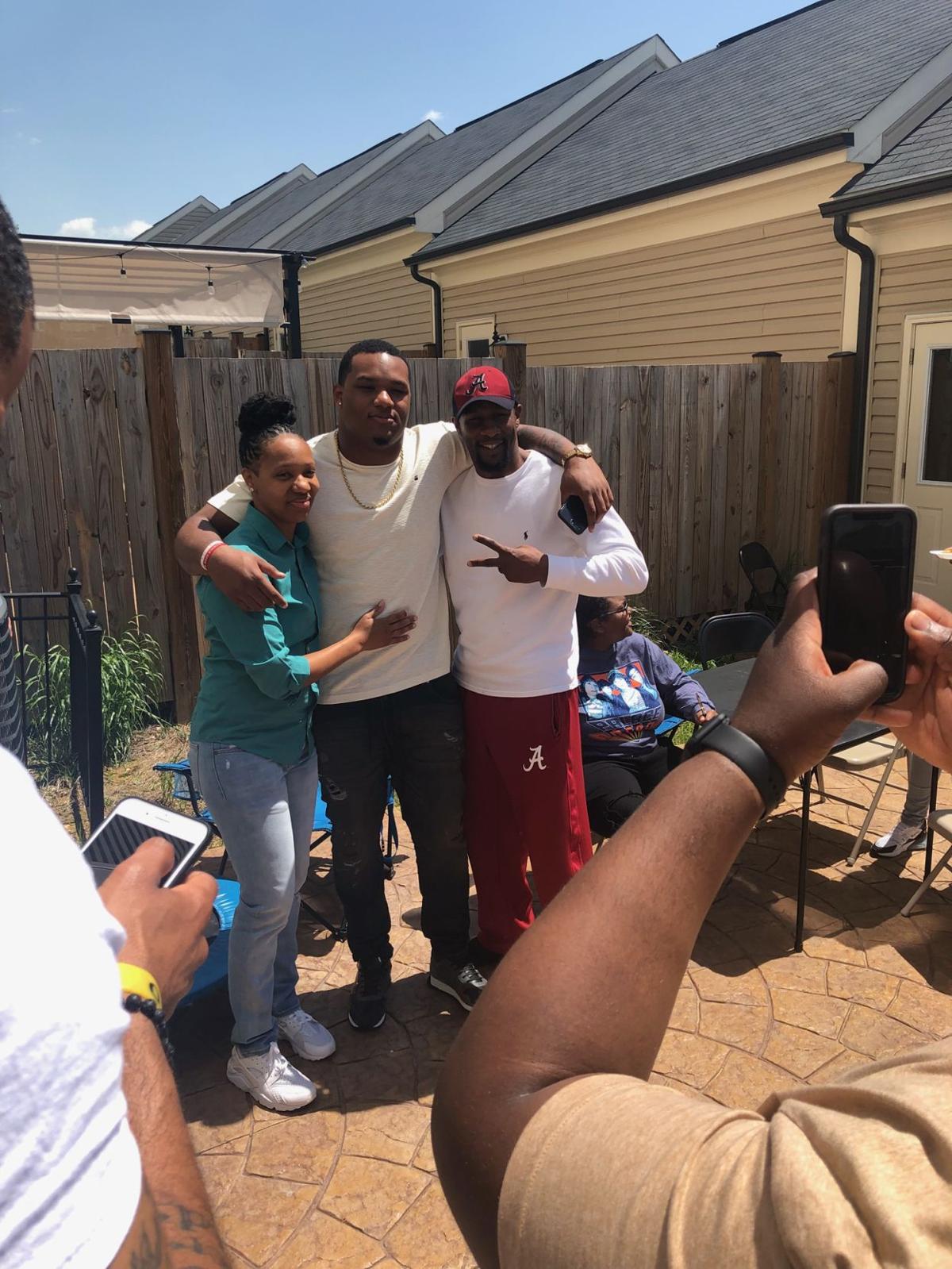 Woodbridge High School graduate Da'Shawn Hand was drafted April 28, 2018 in the fourth round of the 2018 NFL Draft by the Detroit Lions. 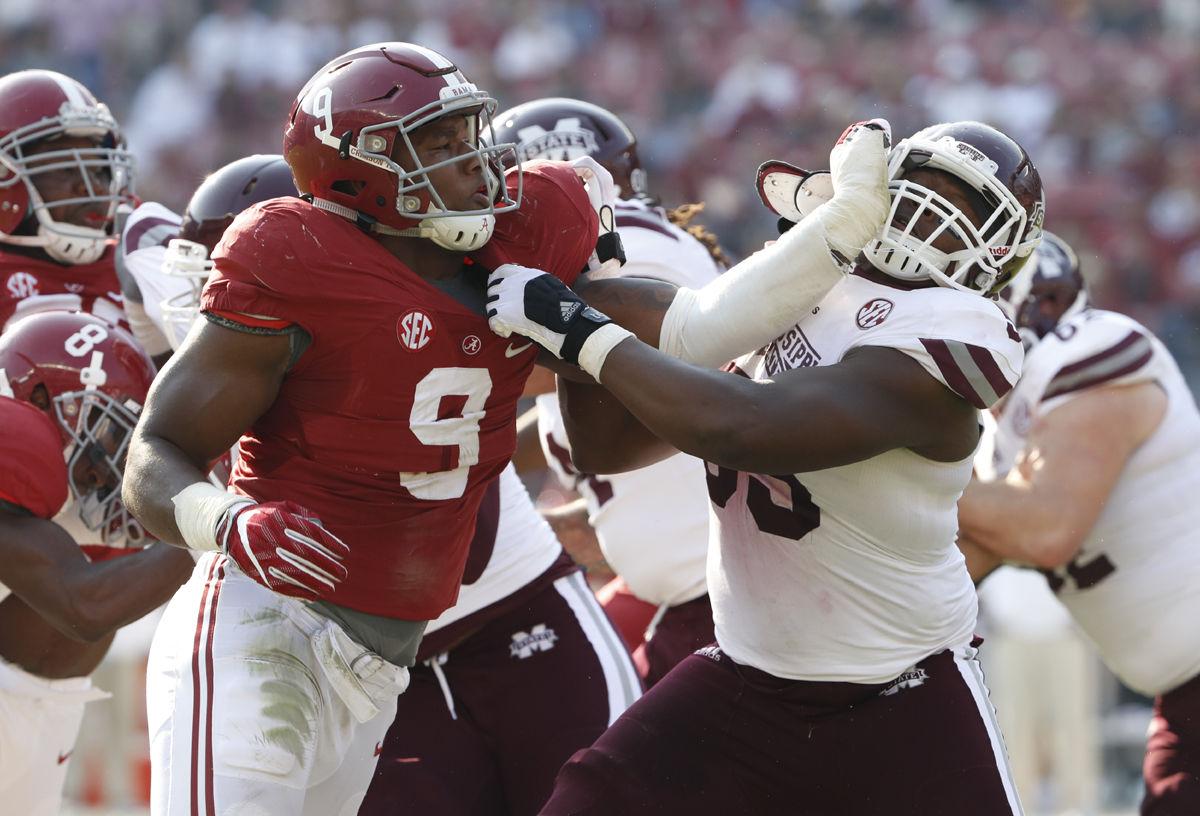 Woodbridge High School graduate Da'Shawn Hand was drafted April 28, 2018 in the fourth round of the 2018 NFL Draft by the Detroit Lions.

The Detroit Lions selected Woodbridge High School graduate Da’Shawn Hand in the fourth round Saturday of the 2018 NFL Draft. He was the No. 114th overall player taken.

Hand, who followed the draft at home, is the first Woodbridge graduate chosen by an NFL team since Virginia Tech offensive lineman Matt Lehr went in the fifth round to Dallas in 2001. Overall, Hand is the fourth Woodbridge graduate taken in the NFL Draft.

To get Hand, the Lions traded up by giving the New England Patriots a third-round pick in the 2019 NFL Draft.

The selection means Hand will reunite with Bo Davis, his former line coach at Alabama who is beginning his first season as Detroit's defensive line coach. Hand will also play again with former Alabama teammate A’Shawn Robinson. Robinson was a defensive tackle at Alabama.

“Yeah, those things help. I mean, I’m not going to sit here and say it doesn’t help," Lions executive vice president and general manager Bob Quinn said. "If you have a coach on the staff that has been in a room, on a practice field, in a same facility with a player for X amount of years, that helps the evaluation. Does that bring it up the board? No, the value is what the value is. But is there a comfort level taking a guy if you can go to an ex-position coach and say, ‘Hey, what makes this guy tick? How can we motivate this guy? Is he going to be a good worker in the building? Is he going to be in our culture? Is he going to be in our program?’ And if we get a ‘yes’ on all those questions, it’s a lot easier to take a guy.”

Hand was the first defensive lineman drafted by the Lions who are led by first-year head coach Matt Patricia. Patricia came over from New England, where he served as the defensive coordinator. Hand was projected as a second-to-fourth round pick.

"Thought it was a really good value pick. Big, strong, guy, position versatility, can play inside, can play outside," Quinn said. "Good scheme fit for us. Good knowledge of our defensive line coach, that helped. Knows our technique, met with him at the pro day. Matt (Patricia) and I went down there to the pro day and met with all those guys. Had a good meeting with Da’Shawn, so felt that was a really good pick for us there."

A four-year defensive end at Alabama, the 6-foot-4, 297-pound Hand rotated in his first three years before becoming a starter in 2017 and earning second-team all-SEC honors. For his four-year career, Hand totaled 11 sacks and 13 ½ tackles for loss.

Hand was rated the No. 1 high school recruit in the nation in 2014 by Rivals.com

"[He] really never played to the level that you expected," ESPN draft analyst Todd McShay said after the selection. "There are times when you watch him on tape and say man there's a lot here to work with. And then there are other times you don't see the consistency and you don't see the same player.

"He's got long arms. He's basically out of central casting in terms of size. This is Matt Patricia looking for big body guys coming from that New England system and I think Hand is one of those players he thinks with some coaching in the NFL level and used in a different way in their scheme will be a better pro than college."

At the NFL Combine, Hand ran the seventh-best 40-yard dash time (4.83) among defensive ends and tackles. Hand’s performance was impressive given his weight. Hand ran faster than anyone who weighed more than him March 4. His time of 4.83 also meant Hand was the 19th player at 297 pounds or more who ran at least a 4.83 since 2000.

The day started like any other at Beville Middle School, until a report of an unauthorized a…

Hylton High School graduate Chris Lee will get a chance to keep his NFL dreams alive with his hometown team.

Congrats Da'Shawn. Best of luck, hope you are successful at the next level.